For a glimpse into the Orwellian world of Baltimore City water billing, in the news since the release of a damning audit yesterday, consider the story of Frances E. Webb.

The 84-year-old former nurse tried for years to tell the city they shouldn’t be billing her for water service for the vacant lot she owns next to her Northwest Baltimore home.

There’s no structure on 3608 Wabash Ave. and no water meter – there’s just grass, a parking pad and a small dog yard. For a while, she had a swing set there.

But unable to stop the bills from coming after many frustrating phone calls with city officials, Webb has just been paying the charges – for 19 years.

Why does she pay for water she doesn’t use on a lot that’s without even a water meter?

Because she’s afraid of what would happen if she did not pay.

“I don’t want them to take my lot! You never know what the city will do!’” she said yesterday inside her tidy Ashburton home. (The quarterly bills for estimated usage clocked in at $7 and $10 when her aunt owned the property in the 1960s and her latest bill stands at $68.77.)

“It cracked me up, the bills show all this estimated usage – what usage?” Webb said.

In the wake of a critical report of its billing practices yesterday by the City Comptroller’s Office, the Bureau of Water and Wastewater admitted that it has overcharged 38,494 customer accounts $4.3 million over the last three years.

Department of Public Works spokesman Kurt Kocher said the bureau would refund the overcharges. Credits should be showing up in customers’ current water bills, he said today. 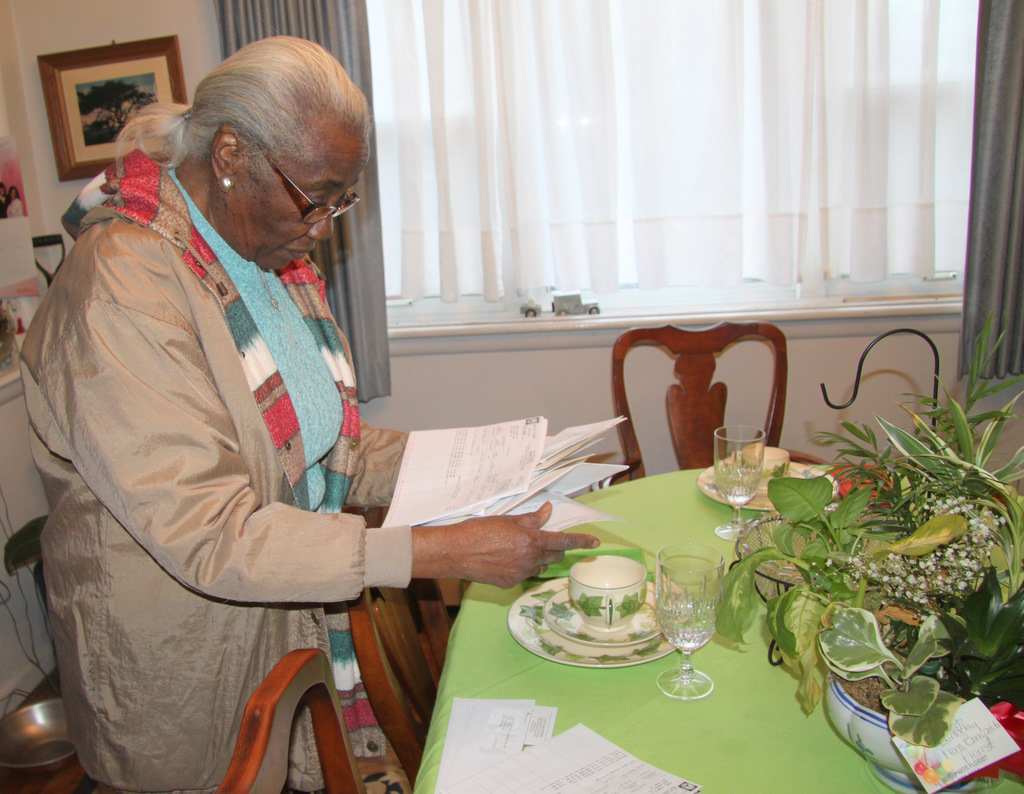 Frances Webb has been paying the water bills on the empty lot “because I’m afraid they’re going to take my property.” (Photo by Fern Shen)

The bulk of the overcharges were in Baltimore City.

The average overcharge was $158, according to figures provided by the agency.

The audit, performed by City Auditor Robert L. McCarty, was critical of many practices by the water bureau – especially for not reimbursing customers for overbillings unless they filed complaints with the city.

According to McCarty, most of the overcharges occurred when the agency added, rather than deducted, so-called “true” meter readings on customer bills. These readings are performed when a meter is suspected to be improperly working, and a meter reader is sent out between regular readings.

Another big problem cited by the report was the agency’s failure to adjust a customer’s bill when an estimated reading was too high. The audit found that 18,266 of the system’s 411,000 metered water accounts had been estimated for four consecutive quarters or longer.

Rudolph Chow, chief of the water bureau, said yesterday that “none of these findings are a surprise” and the agency is working hard to address the problems.

A first step is to add temporary clerks to the telephone call line so that customers don’t have long waits while inquiring about their water bills. His goal is to increase the number of personnel at the office from seven to 22.

Over the next few years, the city will install a wireless meter-reading system, which he said should correct many of the current billing problems. Chow said the department is now hobbled by a 30-plus-year-old “legacy system” that handles billing and other data.

The department’s explanation of the Webb case suggests that problems with water billing may be a bigger problem than the audit shows – and city officials acknowledge.

According to Kocher, Webb does have to pay these quarterly “minimum usage” charges because the property is still is on record as receiving service.

“It probably dates back to when there was a house there,” Kocher said. “There may be a pipe underground, what they call a ‘space pipe.’”

In an email, Kocher explained that “minimum usage charges apply even when there is no usage. . .that pays for the upkeep to the system which connects to that property.”

How do customers such as Webb cut their ties to ancient water usage and stop such bills from coming?

“She needs to write us and pay a $305 ‘abandonment of water supply service’ fee,” Kocher said.

Over many years of protesting the fee, Webb said no one ever told her or her aunt that they could stop the quarterly water bills by paying a fee.

Kocher said the city is trying to do a better job of finding these  hidden pipes and erroneous service billings but they are understaffed and hoping to do better under new leadership.

“I think the attempt to find those in the past has not been diligent enough,” he said, “but our new system is going to really solve the problem.”

Webb did eventually find out about the abandonment of service process, but not until this last November when something really outrageous brought her down to the Abel Woman Building – a bill for $19,370.44 for 3608 Wabash.

“I said ‘They’re crazy,’” she recalled. “‘They’re out of their minds. There’s not even a water meter there.”

Webb called a local television station and complained, and the city adjusted the bill.

(Kocher said a meter on a different vacant lot with a $19,000 bill was accidentally “assigned” to Webb’s vacant lot. “It was human error,” he said.)

When Webb was downtown to discuss the $19,000 mistake, she said she was told by a “Mrs. Washington” that she could pay a $280 fee to have the service stopped. That didn’t make sense to her.

“They told me I could pay a fee and abandon the meter but how do I abandon a meter I never had?” she said, adding that the fee seemed high: “I’m on a fixed income.”

Webb said she may be contacting a lawyer and just won’t pay the latest bill. “I’ve had it.”

“It happens a lot, especially with the elderly who will just pay without question,” Stewart said. “They don’t want to even make a phone call about it, they’re afraid of reprisals.”

Stewart has made a personal campaign out of tracking and publicizing examples of the city’s broken water billing system ever since her own bad experience – a year-and-a-half-long quest to get the city to adjust her water bill.

Since then, using city databases, she’s been tracking hundreds of water bills and believes that only an outside auditor can properly untangle the millions in over- and under-billings, phantom water meters and other problems she has identified.

“I don’t want to see it happen to others,” Stewart said. “People are losing their homes in tax sales and foreclosures. The city is wasting huge amounts of money.”

Stewart said today she’s feeling vindicated by the new audit, but is not satisfied from what she’s read so far about the city’s response.

“They are not going to fix this by simply putting in new water meters,” she said.

It’s not hard to see why Stewart is skeptical. She has amassed a long list of seemingly egregious examples of mistaken billings and payments, and not just from hapless individuals.

Much of her research suggests that the city itself has been one of the biggest victims of erroneous billing – parking garages, shuttered schools, parks, vacant properties and public housing projects where bills have been sent and paid for water never used.

“The city is still paying a water bill for the Pennington Avenue Landfill (Bloody Pond) property, located at 1501 Aspen Street in Baltimore City, Maryland 21226. The landfill closed in May 1, 1981,” she wrote to David McClintock, Baltimore Inspector General, in a November 29 email.

Kocher said Stewart has been “does not have a full picture but is just pulling off items that may or may not been billed. She has no idea what happens to many of these bills.” The school Stewart talks about, Highlandtown Middle School (which closed in 2006), is still paying water bills to maintain fire service, he said. (City schools spokeswoman Edie House Foster, noted that the Department of General Services is responsible for the building now.)

In an interview with The Brew, Stewart said she believes the same mechanism that put the onus on Webb to detect and stop her erroneous billing is at work in these cases.

“Think of all the city-owned abandoned properties in Baltimore, the demolished structures, they’re billing themselves for all of that. Unless somebody does something about it, it stays on the books,” she said. “There are city parks where they’ve got four water fountains and the water bill is higher than the Marriott Waterfront.”

Stewart sent McClintock a number of examples, including her voluminous spreadsheet analyses.

In one of his email replies to Stewart, McClintock said the material she was providing was “troubling” and promised to look into it.