Today those auditors caught up with Singleton – and this evening Rawlings-Blake announced that Singleton has resigned in the wake of a blistering report of his alleged misconduct.

In written statement tonight, Rawlings-Blake called the allegations in the audit “deeply troubling” and said they “were not known” by her office until the audit was released publicly this morning.

“Government transparency and ethical conduct are an important foundation of my administration,” she said.

Singleton, who earned $160,000 as a level three city executive, had been repeatedly touted by the mayor for his efforts to improve the 311 call system and to make Baltimore government more open and accessible.

He was well-liked by the local tech community and said his chief mission was to improve Baltimore’s creaking data and billing systems, such as the 30-plus-year-old billing system at the Bureau of Water and Wastewater.

The audit paints a less savory portrait of an ambitious high flier (Singleton is now 32) who allegedly committed ethical improprieties on behalf of himself and his girlfriend.

Specifically, the audit found that he had pressured the software security company McAfee for a job – “nothing less than Director level at minimum,” according to an e-mail cited in the audit – after he negotiated a multi-million contract with the company. 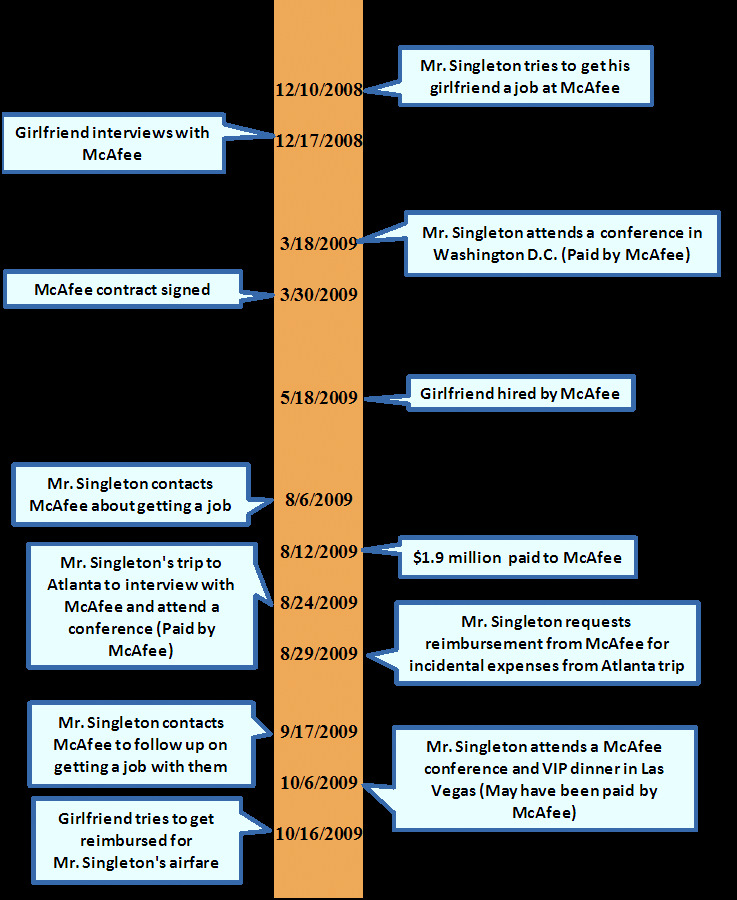 Timeline of Singleton’s relationship with McAfee Security Systems after it sought a contract with New York State in August 2008, according to today’s audit report. (New York State Comptroller’s Office)

He also set up a job for his live-in girlfriend at McAfee and accepted air and hotel reimbursement from the security company on trips to Washington and Atlanta.

He appeared to be McAfee’s paid guest at a convention in Las Vegas where he enjoyed a “VIP dinner” with former Secretary of State Colin Powell.

In one e-mail, a McAfee manager wrote:

“What’s up stud? I had a blast the other day. Question, the girl who was at the hotel with us. Can I get her contact info? We have an Associate Account Manager role open and I wanna recruit her to McAfee.”

The McAfee account manager then wrote to his supervisor, “He’s not giving it up,” referring to Singleton’s efforts on behalf of the girlfriend.

The girlfriend was hired by McAfee in May 2009 – two months after the contract was signed and three months before the company was paid $1.9 million by New York State.

The contract was subsequently canceled, costing the state at least $1.5 million, according to the audit by State Comptroller Thomas P. DiNapoli.

In one instance, Singleton manipulated the competitive bidding process by “pre-negotiating” with a computer company before the contract was publicly announced. Before cutting the deal, he demanded that the company hire a subcontractor of his choosing.

“These officials were supposed to lead New York State’s efforts to modernize technology, but my office found flagrant misconduct and that no one within OFT stepped forward to question these actions, indicating a systematic breakdown in agency ethics,” DiNapoli said in a statement today.

The audit report would be turned over to the state’s Joint Commission on Public Ethics for further action.

The audit began in October 2010 after DiNapoli’s office rejected a contract requested by the agency for “staff augmentation” valued at $7.5 billion.

Flawed cost estimates and “overspending on consultants” were among the questionable items in the contract that sparked DiNapoli to order a full audit of the agency.

E-mails disclosed by the audit indicate that Singleton – who previously served as CIO for the Ohio treasurer’s office – had ambitions that went well beyond New York State.

He told a McAfee confidant in September 2009 that he wanted to work for McAfee in the area of “government, health, education,” live in Georgia where the company is headquartered, and “have flexibility to grow business where ever possible and feasible around the country.”

In another e-mail he said, “I’m ready to talk about MFE [the stock symbol for McAfee]. Looking to leave before December so need to start putting things in motion.”

The job he wanted with McAfee never came to pass. But then the job in Baltimore did.

–Fern Shen contributed to this story.