Stalled for more than a decade, the Westside “Superblock” project appears on the verge of coming to life.

Confident that a lawsuit against the project will be turned aside by the Maryland Court of Appeals, city officials are preparing to sell the property to Lexington Square Partners.

The agency went into closed session to approve the PILOT (payment in lieu of taxes), whose amount has not been disclosed. Under a PILOT, a developer pays as little as 5% of the assessed value of improved property for a period of 10 to 20 years.

Meanwhile, time has taken its toll on the vacant city-owned properties that was once at the heart of Baltimore’s thriving Howard Street retail district.

Back in 2007, when the Baltimore Board of Estimates agreed to sell the parcel to Lexington Square Partners, the property was valued at $21.6 million.

Today, the site is appraised at $12.2 million, according to M.J. “Jay” Brodie, president of the BDC. As a result, the city is renegotiating the original pact to reflect the 43% drop in price.

At the same time, the city is expending $1.2 million to demolish the ex-Greyhound bus terminal on Fayette St., and $349,000 to stabilize the roof of the ex-Read’s Drug Store at Howard and Lexington.

Brodie said these costs would be factored into BDC’s negotiations with the New York and Atlanta development group.

Brodie also pointed out that the original agreement allowed the developer to deduct up to $10 million for demolition and remediation expenses.

If the site were to require extensive environmental remediation, Brodie said in an interview today, the developer is entitled to a major reduction in the $12.2 million appraised value.

That could potentially cut the sales price of the land to a few million dollars. 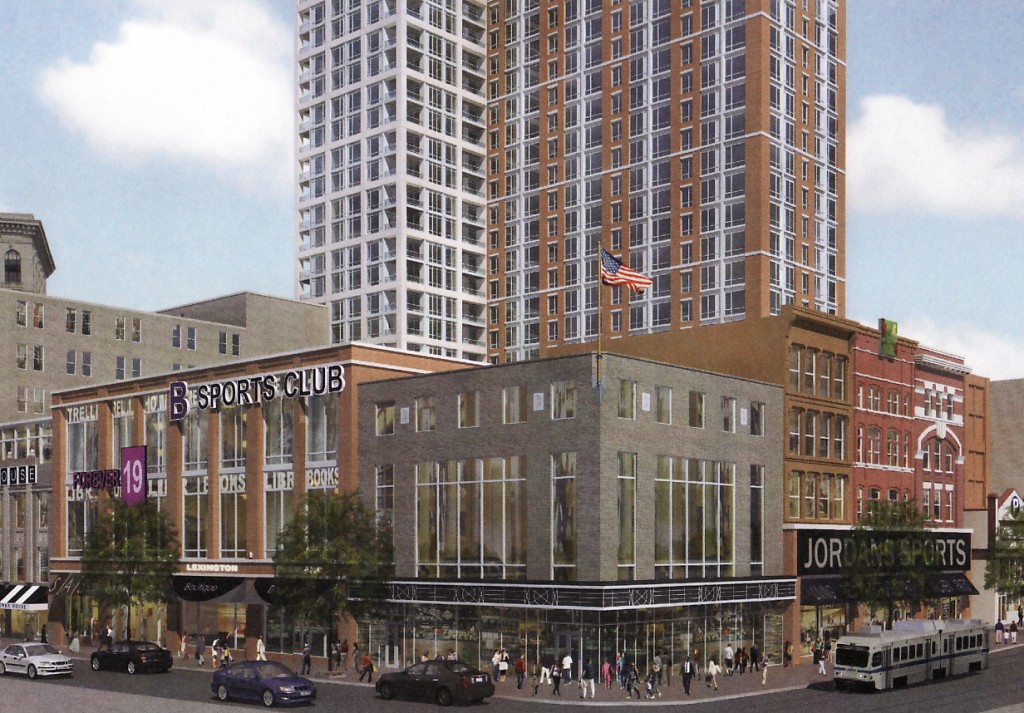 Artist’s rendition of Lexington and Howard streets upon completion of the “Superblock” project. (Courtesy of Dawson Co.)

Lexington Square Partners has until April 30 to reach an agreement with the city.

The developer proposes to build 296 market-rate apartments over a parking garage on the site of the demolished Greyhound terminal.

More than 200,000 square feet of retail space would wrap around the apartment high-rise, mostly fronting on Howard and Lexington streets.

Some of the retail space would be located in renovated historic buildings, including the ex-Read’s Drug Store, whose Art Deco facade would be retained.

The developer proposes to lease 53% of the space to a “national retail anchor,” Brodie said today.

He said leases with the anchor store and other retailers have not been signed.

The biggest obstacle facing the project, according to Brodie, is the lawsuit from 120 West Fayette Street L.L.L.P., an entity controlled by Orioles owner Peter G. Angelos, now before the Maryland Court of Appeals.

The city joined forces with Lexington Square Partners and Maryland Historical Trust (MHT) to block the suit, which claims that MHT violated a 2001 pact that protected the historic buildings on the site when its executive director approved the developer’s plans in late 2010.

The suit, dismissed by lower courts, was argued before the state’s highest court in early January. A decision is expected in April – and the city anticipates getting a green light to proceed with the development.

In addition to the proposed PILOT, Superblock is located in a state Enterprise Zone, which entitles the developer to a 50% reduction in property taxes for five years, with 10% incremental increases for the next five years. (The state partially reimburses Baltimore for the loss in tax revenues).

Brodie said demolition of the Greyhound station will begin next month, and stabilization of the Read’s roof is scheduled to start in May.

Lexington Square Partners is headed by the Goldman, Chera, Feil and Nakash families of New York.

The first three groups are active in Manhattan and Brooklyn real estate, while the Nakash family owns Jordache, the clothes company. They are joined by Dawson Co., a black-owned development firm in Atlanta.