As the sedate center of municipal government, Baltimore City Hall is typically a place where swift-stepping suits converse in hushed voices as they pass through the marbled corridors of power.

For 45 minutes today, though, the building erupted in hollers and loud clapping as about 100 city employees gathered to celebrate the Richard A. Lidinsky Sr. Award for Excellence in Public Service.

Donald W. Heinbuch stepped forward as the winner of this year’s award. 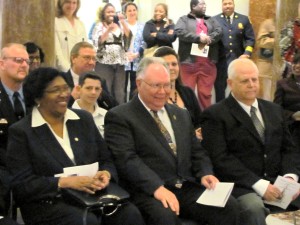 Fulfilling what he said was a childhood dream, Heinbuch started working for the Baltimore City Fire Department at age 19.

He retired last month as assistant chief of operations after 41 years of service.

Among his duties, Heinbuch was the incident commander of the 2001 Howard Street railroad tunnel fire and was in charge of many other major emergencies, “of which we have had a few,” Mayor Stephanie Rawlings-Blake joked.

Two runners-up were also cited in the ceremony: Francine Childs, assistant commissioner of school health at the Baltimore City Health Department, and Kevin Cleary, deputy director of the Mayor’s Office of Neighborhoods and Constituent Services.

Heinbuch picked up a handsome brass replica of the Battle Monument and $2,500. His name was unveiled on a plaque of awardees that hangs in the City Hall Rotunda. 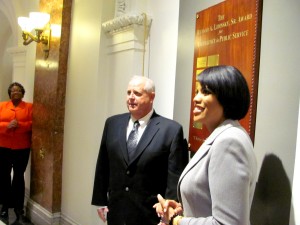 Heinbuch stands beside the awards plaque with Mayor Rawlings-Blake. (Photo by Mark Reutter)

The runners-up each received $1,000 and handshakes from the Mayor and City Comptroller Joan M. Pratt, plus those claps and hollers.

The award is named after Richard Lidinsky, the legendary deputy comptroller who wore the city’s seal on his tie clip as “a badge of honor.”

Lidinsky retired from city government in 1991.