Consultants were piled up all over City Hall this week as Baltimore officials hired one consulting firm – for nearly $1 million – to oversee the consulting work of others.

The largest accretion of outside aides and overseers was requested by the Engineering Division at the chronically criticized Bureau of Water and Wastewater.

In addition to trying to sort out tens of thousands of tangled residential water bills, the agency is tasked with managing $65 million in water infrastructure improvements over the next year, as well as making progress on a federal consent decree to stop untreated wastewater from gushing into the Chesapeake Bay.

The Board of Estimates yesterday awarded $899,989.98 to Johnson, Mirmiran & Thompson to oversee the “study and design efforts” of other unnamed consultants.

The Sparks-based consultancy will also assist the water bureau with documentation for the sale of revenue bonds and strategic planning efforts, according to the board’s agenda.

Just two months ago, the Johnson firm shared $1.7 million with O’Brien & Gere Engineers to prepare design memoranda and other data for new manholes and sewers for the Gwynns Falls Valley sewershed.

The Johnson firm picked up an additional $105,201 yesterday to provide engineering support services at the Patapsco Wastewater Treatment Plant, which is undergoing a $117 million overhaul at the hands of Fru-Con Construction Corp.

Across Curtis Bay from the Patapsco Wastewater Plant lies another monument to the city’s perpetual need to purge itself of waste.

The Quarantine Road and Millennium landfills consist of a series of sculptured hills and dales created by residential trash, sewage sludge and recycling from the city’s Wheelabrator Waste-to-Energy facility.

Affording spectacular views of downtown Baltimore and the Key Highway Bridge, the landfill has been dubbed “Mt. Baltimore” and  semi-seriously nominated by Brew contributor Gerald Neily as a national park.

The city has no such lofty aims.

Instead, it awarded $3.88 million to American Infrastructure-MD. Inc. to provide “comprehensive improvements to the sediment and erosion control devices” across the sweep of squishy peaks.

But the contract “did not indicate the proper total acreage to be stabilized with permanent seeding and erosion control matting.” Hence, the Bureau of Solid Waste renegotiated the contract with American Infrastructure and came up with EWOs (Extra Work Orders) 1 and 2 totaling $1,230,052.09.

Yesterday, the Board of Estimates unanimously approved the 32% increase over the original price. (NOTE: Although city contracts over $25,000 are supposed to be pre-approved by the board, the Bureau of Solid Waste gave this project the go-ahead months ago and, according to spending board records, “work on this change order is 100% completed.”)

The panel also approved $450,000, in four EWOs, to Spiniello Companies for “urgent-need” work for the bureau of water and wastewater.

This contract (WC 1198) has now seen 44 extra work orders, which has more than doubled its original bid cost of $10.5 million to $24 million. The EWOs on this contract stretch back to April 2010.

The practice of adding work orders onto existing contracts – rather than going through the competitive bidding process – has been detailed by The Brew (here and here) and was criticized last year by City Auditor Robert L.McCarty. 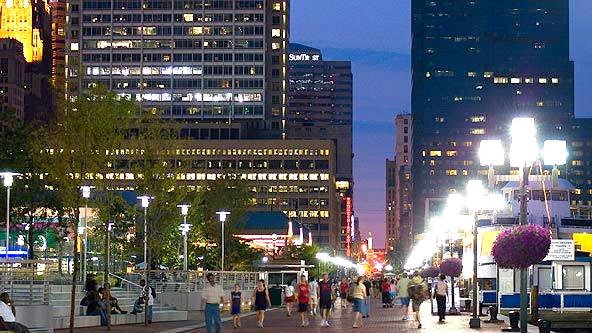 Rummel, Klepper & Kahl has won the contract to assess the Inner Harbor Promenade opened 40 years ago. (Photo by Alamy)

The five-member board, controlled by Mayor Stephanie Rawlings-Blake, also approved the following:

• $281,533 to consultants Rummel, Klepper & Kahl (RK&K) to assess the condition of the aging Inner Harbor Promenade from the Rusty Scupper Restaurant in South Baltimore to Pier 6 on the northeast side of the harbor.

This assessment “will include 77 surface-level features, including landscape/hardscape, drainage, stormwater management and underwater assessment of bulkheads, piers and relieving platforms,” according to the board’s agenda. The promenade was opened in 1972.

• $133,345 again to RK&K, to provide design engineering services to the city DOT for the replacement of the 60-year-old Maisel Street Pedestrian Bridge over the Baltimore-Washington Parkway. A new bridge has been promised to residents of Westport and Mount Winans for at least a decade.

• $184,049 to RK&K – one more time – to assist the Bureau of Water and Wastewater to review change orders, scheduling and claims analysis.

• $268,703 to Lorenz Inc. for the supply, delivery, planting and maintenance of street trees.

• $257,611 to consultants STV Inc. and PB Americans to provide inspection services for the Central Avenue pavement and storm drain rehabilitation project, which will serve Harbor East and the continuation of the road to Harbor Point, the future home of Exelon’s regional headquarters.

• $179,144 to P. Flanigan & Sons as an EWO (Extra Work Order) to its $1.4 million traffic calming contract. This expenditure relates to work on the Guilford Avenue Bike Boulevard, which Jamie Kendrick, deputy transportation director, calls a “break-out traffic calming project” undertaken by the city.

• $316,533 to Marian House Inc. to provide housing and support services to 30 homeless women between April 1 and July 25, 2012. The women are primarily ex-offenders who are disabled as well as homeless, according to board records.

• $140,000 to the Central Baltimore Partnership to develop a plan, with city DOT, to improve “pedestrian connectivity” around Amtrak’s Penn Station. The study area will be between Lanvale Street and Mt. Royal Avenue (north and south of the station) and from Maryland Avenue east to St. Paul Street.

Mayor Rawlings-Blake was absent at yesterday’s meeting. She was represented by Finance Director Harry Black.