Mayor Stephanie Rawlings-Blake’s office has placed before the Board of Estimates a $300,000 consulting contract to produce this year’s African American Festival, directed at a company run by a close friend.

The award – up for approval this morning by the board, which  Rawlings-Blake controls – would pay greiBO K Designs a “producer’s fee” of $150,000 as well as $50,000 for “marketing and infrastructure costs” and $100,000 for “entertainment fees to assist with securing local and national talent.”

The festival is scheduled for July 7-8 in the parking lots north of M&T Bank Stadium and reportedly attracts over 500,000 visitors.

The firm’s president and CEO, Shelonda D. Stokes, has been a friend of the mayor for a number of years. In last year’s election, Stokes contributed $2,200 to the mayor’s campaign under her name and greiBO’s name.

Stokes, a resident of Owings Mills, has otherwise supported Republican candidates, including Michael Steele, for whom she served on a commission that he chaired when he was Maryland’s lieutenant governor.

The festival contract bypasses the city’s Request for Proposals process – and competitive bidding – by being designated a “professional service contract.”

Such contracts need only be listed on the Board of Estimates agenda and considered by the board at its weekly meeting.

Reached today at the Board of Estimates meeting – which unanimously approved the consulting deal – Stokes said she could not comment on the financial aspects of her dealings with the city and referred a reporter to the mayor’s office.

In an email to The Brew, the mayor’s spokesman Ryan O’Doherty said campaign contributions to Rawlings-Blake have not and will not influence her administration’s actions.

Stokes did tell The Brew that last year, under her guidance, the festival was a great success and “all the vendors were paid.”

The fees will not go directly to greiBo K Designs. Instead, they will pass through the Baltimore City Foundation, a municipal charity set up to support youth programs and underprivileged residents.

As stated in the agreement signed by the mayor’s office and Stokes: “In order to expedite payments to the Consultant, the City will transfer $300,000 to the Foundation from which the Foundation will pay greiBO’s compensation and the entertainment fees described above.”

The Brew obtained a copy of the consultant’s agreement yesterday. 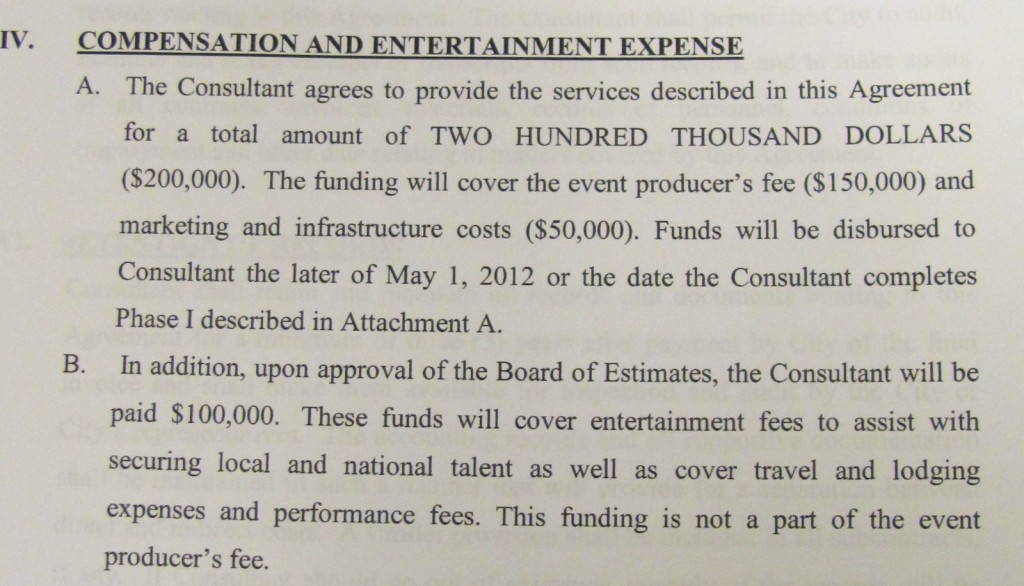 Section of consultant’s contract that stipulates the fees to be paid to greiBO. (City Comptroller’s Office)

The one-year agreement stipulates that greiBO “will work closely with the mayor’s office” in designing, fundraising, planning, organizing, managing and producing the 2012 African American Festival.

The greiBO group will work directly with Kimberly Washington, deputy chief for government and community affairs. Harry E. Black, newly-appointed director of finance, signed the agreement on behalf of the mayor.

This arrangement differs from other city-sponsored events and festivals, most of which are run by the Baltimore Office of Promotion and the Arts and do not have special promoters, especially promoters with such a high fee schedule.

A fixture in the city for more than 30 years, the African American Festival (long known as AFRAM) has had a rocky financial history.

After years of falling attendance, the festival was placed under the control of then Mayor Martin O’Malley in 2002, and run for many years by the Visionary Marketing Group (VMG) headed by LaRian Finney.

The greiBO consulting fees will be channeled through the Baltimore City Foundation, according to the contract before the BOE today.

Last year, which was the first time Rawlings-Blake’s office had control of the fair, VMG was replaced by greiBO. This followed complaints by several vendors that they had not been paid after the 2010 festival.

Finney disputed these claims. Informed sources told The Brew that Finney and Rawlings-Blake did not get along, and the mayor “fired” VMG as festival promoter.

Following greiBO’s takeover last year, the Board of Estimates earmarked two grants, totaling $225,000, to greiBO to produce the 2011 festival.

In each case, the funds were described as advances to the company that would be repaid from the festival’s fundraising and vendor revenues.

It could not be determined yesterday if the grants have actually been paid back to the city.

Stokes today confirmed that she received grants this year directly from the City but did not know if they were offset by the Baltimore City Foundation and referred a reporter to the Foundation on that question.

GreiBO describes itself as a “boutique-style agency” specializing in video production, advertising, marketing, music and publishing.

The new contract with greiBO is due to be voted on by the Board of Estimates this morning. The five-member board is controlled by Rawlings-Blake through her vote and the votes of two appointees, City Solicitor George Nilson and Public Works Director Alfred Foxx.

The other spending board members are City Council President Bernard C. “Jack” Young and Comptroller Joan M. Pratt, who voted to approve the contract.