Activists yesterday condemned what they said was abusive behavior by Baltimore police, pointing to the recent police shooting of a disabled man in West Baltimore and the point-blank macing – captured on the video below – of a man participating in a protest near the Johns Hopkins Medical Campus.

“We’ll be damned if we’re going to allow people to be disrespected this way,” said Rev. Cortly C.D. Witherspoon, president of the local chapter of the Southern Christian Leadership Conference.

Witherspoon, the lead speaker at the March 26 Trayvon Martin rally that drew more than a thousand people to downtown Baltimore, said that the U.S. Justice Department should investigate the incidents, the city should discipline or fire the officers involved and a number of other measures should be taken to rein in excessive use of force by city police, including “a real civilian review board.”

According to the mother of David Yim, police responding to an April 10 call “for medical assistance” arrived ahead of the ambulance and shot her 39-year-old son who is disabled, firing at him from inside their patrol car.

“He wasn’t a threat to them. They should have known that he was disabled from the way he moves,” said a sobbing Janice Thompthin, who said her son has a number of physical disabilities including an arm that is paralyzed.

She added that his physical condition is “stable” following the shooting and that he was transferred, at the family’s request, to a psychiatric hospital following the incident.

No Response from Police

City police have not responded to an email and phone call from The Brew seeking comment this morning on these cases or on the group’s charges.

The news conference, organized by the All People’s Congress and Witherspoon’s Justice 4 Trayvon Martin Committee, attracted a small group of media and residents.

It fell on the same day the Maryland branch of the American Civil Liberties Union was giving city police poor marks for failing to comply with the terms of a settlement in a lawsuit over their handling of low-level “quality of life” crimes.

An independent auditor found that 17 percent of reports written by officers did not support a finding of probable cause and that almost 20 percent of the arrests were not properly documented.

The auditor’s report “demonstrates a police department that is not making a good faith or effective effort to correct its wrongdoing,” said David Rocah, staff attorney for the ACLU of Maryland, in an emailed statement.

The cost to the city of settling citizen lawsuits against the police, covered most recently in The Brew here, has been a longtime subject of concern.

Another speaker at the news conference described how he was maced and roughed up by police during a March 29 jobs protest that began at the 2100 block of East Oliver Street.

The church group has been arguing that EBDI’s massive redevelopment project near  the Johns Hopkins medical campus has failed to deliver promised jobs to neighborhood people. (At a December protest, an EBDI official addressed a crowd of 200 protesters, saying they “work as hard as we can to place as many of you as we can.”)

At the corner of Rutland and Eager streets, the 3/29 action became confrontational. Police say protesters blocked trucks from entering the site.

“They started clearing the street and I guess I didn’t get to the sidewalk fast enough,” Thomas H. Threatt recalled. He said several officers “grabbed me” and after getting him prone on the ground, sprayed mace in his face. “They sprayed it in my face and my eyes,” he said. 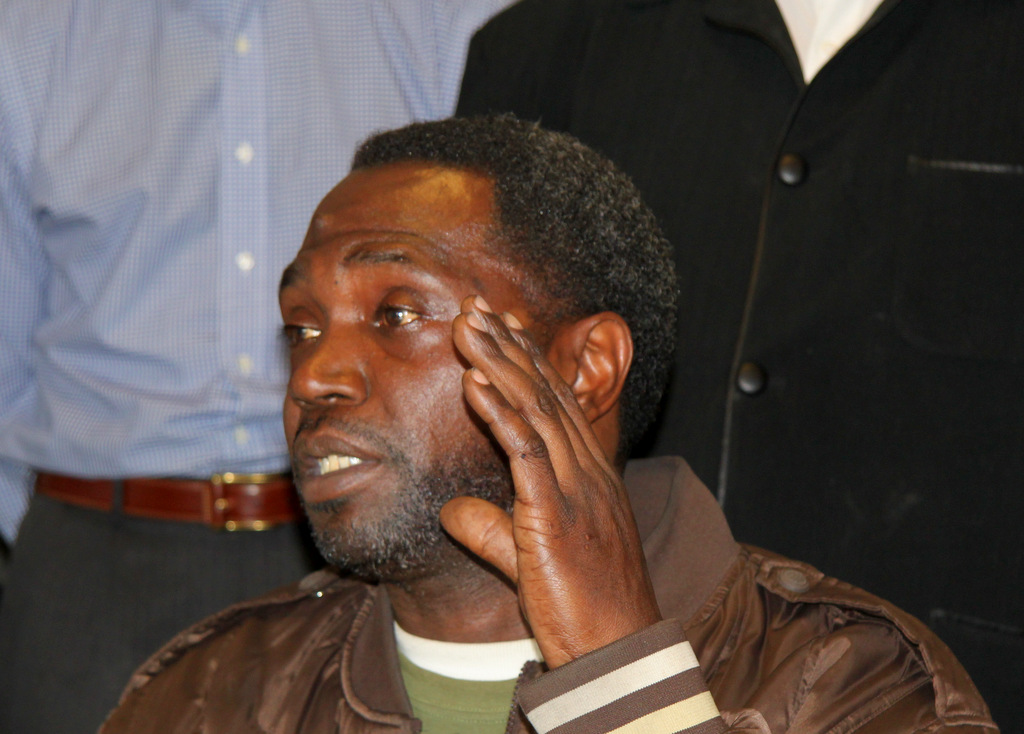 The video appears to illustrate his account, showing Threatt trying to protect his face by pressing it to the ground, as five or six officers pin him down, yanking his head up by the hair at one point so they could continue to reach within inches of his face with the mace.

The video also shows officers putting their knees on Threatt’s neck and head.

Threatt, who was arrested along with three other protesters, still faces charges in connection with the incident, including disorderly conduct and inciting a riot, he said.

“They should drop the charges” against Threatt, suspend the major who was present and discipline the other officers involved, Witherspoon said

He said his group will file Civilian Review Board complaints about the Threat’s arrest, as well as Yim’s shooting.

All Peoples Congress and Occupy 4 Jobs organizer Sharon Black said the groups plan a community meeting on June 9 June to ask the public to testify about police abuse, false arrest, racial profiling or other improprieties.

“We do not have any confidence in the police to investigate these abuses internally,” Black said.