Arguing that city development policy “is broken,” about 75 people gathered Saturday outside the Charles Center offices of the Baltimore Development Corporation (BDC) to call for more emphasis on working people, children and neighborhoods.

Activist Kim Trueheart told the audience they need look no further than the BDC’s mission statement to understand the core problem with the city’s development arm, which has wielded great power for years through land deals and subsidies:

“Our job is to insure that Baltimore is meeting the needs of its business community, to the greatest extent possible, every day,” the agency’s statement reads in part.

“The model is broken. It’s foul!” Trueheart said to applause.

“We need to demand that the mission statement of the BDC be changed to ‘to advocate for the workforce,’” she said, going on to cite high unemployment for the city overall and for African-American residents in particular.

Trueheart’s remarks were delivered as part of a forum sponsored by Another BDC is Possible, a group loosely composed of Occupy Baltimore activists, union representatives, workers’ rights groups and advocates for more programs for youth and neighborhoods.

Organizer John Duda said Another BDC is Possible pulled together the forum in part because they are frustrated with lack of progress since a November meeting with BDC chief M.J. “Jay” Brodie.

Since then, he noted, Brodie (who had promised a continuing dialogue with the group) announced his plans to retire and BDC policy has seemingly continued unchanged, with the city proposing a PILOT subsidy for the Superblock project valued at about $35 million over 20 years. 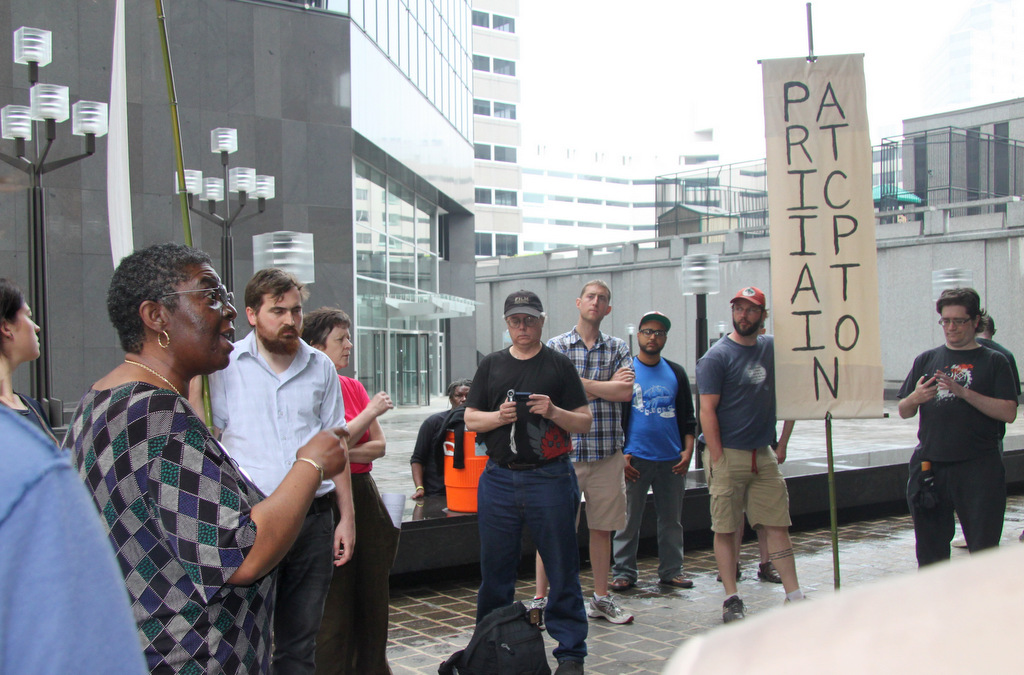 Kim Trueheart addresses the group "Another BDC is Possible" on Saturday. (Photo by Fern Shen)

The city needs “fair development policies,” he said, arguing that the benefits of subsidies to developers and corporations “never filter down to the working people of this city.”

Leaders of a Beautiful Struggle, United Workers and several other groups were represented at the gathering, held in a protected area on Charles Street, during an afternoon of heavy rain.

Several said that the departure of Brodie (BDC president and CEO since 1996, who defended the agency and its use of tax abatements at length in The Brew here) offers an opportunity for a change of direction.

Friday was the deadline for applications for his position.

In a description of the job, the BDC says the “ideal candidate” will possess “thorough knowledge and experience in urban economic development” and have a “passion” for real estate and business development.

A candidate is expected to be thoroughly versed in Baltimore’s controversial developer subsidy programs, such as PILOTs (payments in lieu of taxes) and TIFs (tax increment financing).

The job description does not specifically cite neighborhoods or neighborhood development as part of the agency’s mission, and instead emphasizes “facilitating new commercial development projects” to create job opportunities for city residents.

While potential candidates will be initially vetted by the agency, Mayor Stephanie Rawlings-Blake and Kaliope Parthemos, deputy chief for economic and neighborhood development, will make the final decision.

The mayor and her staff have so far not discussed the criteria they will use to select the new BDC chief, nor solicited feedback from the City Council or the public.

Many of the speakers yesterday called for the city to redirect public spending from developer subsidies to youth and neighborhood programs.

Hathaway Ferebee, executive director of the Safe and Sound Campaign, had some very specific proposals. She called on the City Council to reject Mayor Rawlings-Blake’s proposed 2013 budget until she agrees to double youth summer jobs and after-school programs for city children.

Council members need to be encouraged because they fear for their political careers if they oppose the mayor, Ferebee said: “Tell your council people ‘We have got your back.’” 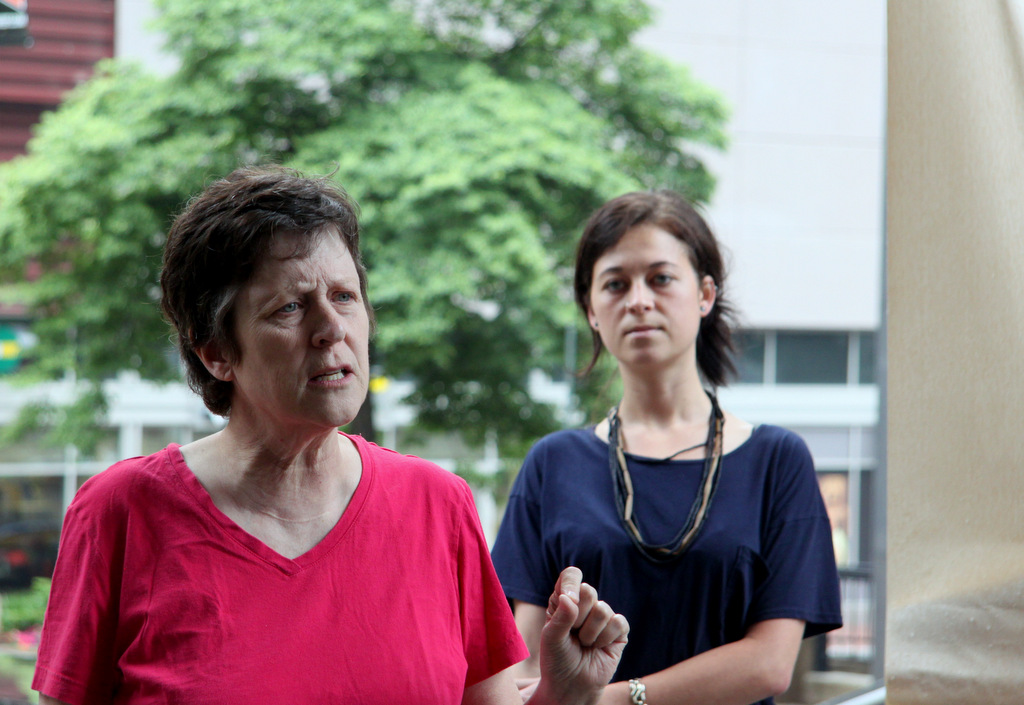 Hathaway Ferebee, of Safe and Sound Campaign, and Casey McKeel at the rally. (Photo by Fern Shen)

One of several opponents to the proposed juvenile detention center in Baltimore, Ferebee is calling for the state to use the $80 million remaining from $100 million set aside in the capital budget for the project to be spent instead on city recreation centers, youth programs and dilapidated city schools.

“We are planning meetings with groups and rallies in each legislative district,” Ferebee said. “Make it impossible for anyone who wants to have a political career to build that jail.”

“Only 10 per cent of Baltimore’s full service hotels are union and the average wage for temporary workers is $8 per hour,” with full-time housekeepers making only $10.32 per hour, Leiblum said.

“Hospitality jobs don’t have to be this way,” she said.

In Philadelphia, she said, 30% of the hotels have union representation and the average pay for housekeepers in $14.50 an hour. In Washington, D.C., she added, 35% are union, “and they make on average $16 an hour, with good benefits and health care.”

Leiblum said this summer, Unite plans to rally workers and push city officials on this issue: “The companies are nasty, and the city is letting them get away with it.”