The Baltimore Board of Finance’s approval yesterday of $35 million in tax increment financing for the expansion of Under Armour’s Locust Point headquarters violates its own financing guidelines.

A memo by the board’s clerk notes that the proposal is at odds with the city’s TIF financing policy requirements by supplying a significantly higher ratio of public to private funds.

The memo also reveals that the lion’s share of TIF bond money won’t go to street or other infrastructure improvements in Locust Point, but to a new waterfront park and “state-of-the-art” sports facilities adjoining the Under Armour headquarters.

The memo says that ownership of the park site has not been determined and may wind up in private hands “with public access.”

The memo justifies the high ratio of public underwriting by saying that “due [to] the public nature of certain of the expenditures and the relocation to Baltimore of a major corporate headquarters, this project is worthy of an exception.”

It also asserts that without the TIF tax break, the expansion would not yield Under Armour, which is acting as its own developer, a sufficient return on its investment.

The board yesterday went into closed session to discuss the Under Armour plan, invoking an exemption to Maryland’s Open Meetings Act that permits closed meetings when a matter involves proprietary financial information.

This reporter, along with a reporter from The Baltimore Sun and citizen activist Kim Trueheart, were asked to leave prior to the “presentation for the board’s approval of the introduction of legislation for the North Locust Point TIF,” which comprises the Under Armour expansion.

The Brew obtained a copy of the board’s six-page memo describing the financial ramifications of the Under Armour plan, which will be introduced to the City Council for approval.

Who Will Own Sports Facilities?

In addition to the high ratio of public financing, the memo describes the city’s plan to spend $27 million of the $31 million of bond funds ($3.9 million will be consumed in financing fees and reserves) on a park to be located adjacent to Under Armour’s current Tide Point campus on Hull Street.

The waterfront land is currently owned by the Maryland Port Administration and used by Westway Terminals for the storage of acids, molasses and chemicals in large tanks.

The city proposes to relocate Westway’s tanks, upgrade the existing bulkheads and piers along the harbor and redevelop the acreage “as open space with state-of-the-art athletic fields and sport facilities.”

Who will own the park and athletic facilities has not been determined, according to the memo, written by Stephen M. Kraus, chief of the city’s bureau of treasury management and clerk of the finance board.

“Potential scenarios” for ownership of the site, Kraus told the board, “include state, city or private ownership with public access.”

The city’s Board of Finance handles matters involving the capital budget, issuance of municipal bonds and other financial matters. 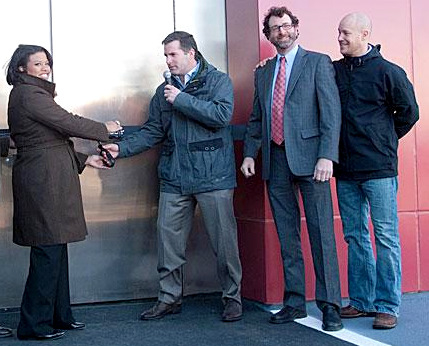 The TIF guidelines adopted by the board in 2008 (and updated in January 2012) state that “each project must evidence substantial private resources (debt and/or equity) for the development.”

Kraus’ memo states that the Under Armor project has a 6.6:1 ratio, meaning the amount of private funds is 21% below the recommended minimum.

But this calculation actually understates the low level of Under Armour’s own capital commitment.

It includes the company’s $60 million purchase of its Tide Point headquarters last July – months before the Finance Board granted approval to begin the process of reviewing Under Armour’s expansion.

By including the building purchase, the ratio reached the 6.6:1 ratio. If excluded, the ratio drops to 4.8:1 of private-public financing. This figure is 66% below the minimum 8:1 threshold.

The Kraus memo breaks down the public improvements to be made with the $35 million TIF bond, showing that three-quarters of the bond money would go to the proposed park and sports facilities:

The land is part of the Locust Point Industrial Area, which entitles the sports apparel maker to a 50% reduction in city property taxes for five years, with 10% incremental increases for the next five years.

Under Armour is proposing to spend $170 million in expansion, so the EZ tax credits would be substantial. (The Kraus memo indicates a $8.4 million property tax credit, which is partially reimbursed to Baltimore by the state.)

Yesterday’s approval of the plan by the Finance Board means that three pieces of legislation will be submitted  to the City Council by the Rawlings-Blake administration.

They are: an amendment expanding the original development district, an ordinance that designates Locust Point as a special taxing district, and approval for the city to issue TIF bonds not to exceed $35.017 million.

The expansion will create 617 new jobs, according to the Baltimore Development Corp. (BDC), whose outgoing president, M.J. “Jay” Brodie, presented material on the project to the Finance Board during yesterday’s private session.

By the latter estimate, each job created by Under Armour will amount to $75,503 in TIF bond funding.