So, you say you’d love to whiz around the leafy bike paths at Druid Hill Park or bike a few laps around Druid Hill Reservoir or Lake Montebello, but you don’t have a bicycle?

Or, you have a bike but you don’t have time to ride it over there . . . or a way to haul the bike to the lake? (Or perhaps bicycling through Baltimore traffic seems kind of intimidating.)

The Baltimore City Department of Recreation and Parks has bikes at both reservoirs that you can rent for a $5 suggested donation.

“We come out here every year to support it,” Ruby Turner said on a recent Tuesday, as she secured two shiny blue bikes for her sons Deandre, 13, and Jordan, 9, to ride the protected 1.5-mile path around Druid Hill Reservoir.

“It’s a great opportunity for the community,” she said, “It’s therapeutic for us. And it saves me money.” 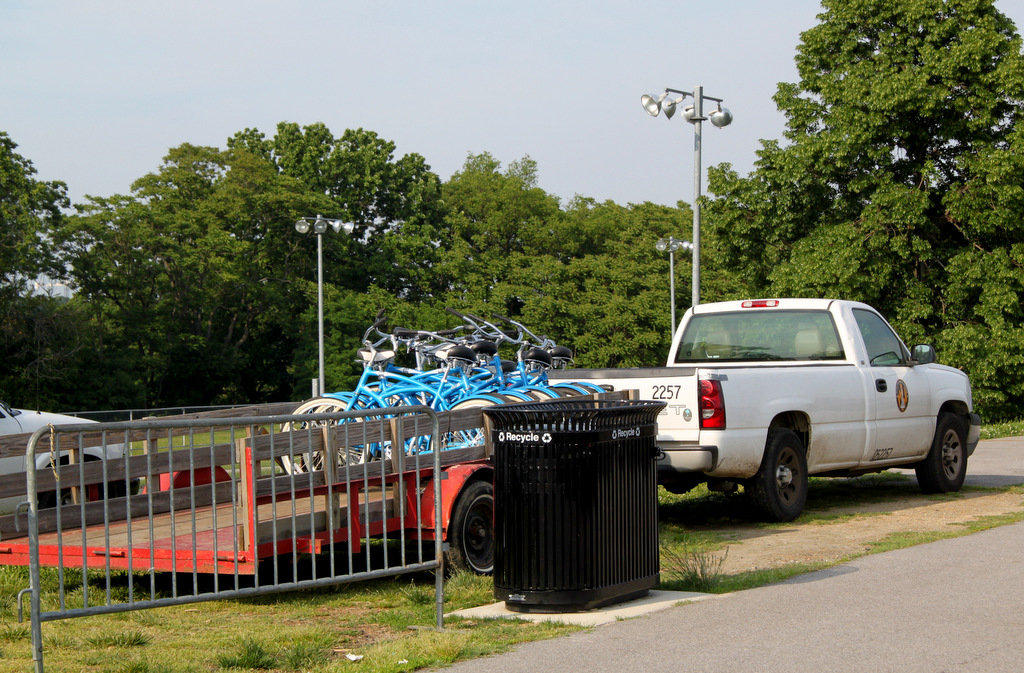 How the city brings the bikes to Baltimore parks. (Photo by Ben Halvorsen)

The “Ride Around the Reservoir” program, operated by the city since 2007, was expanded this year, in partnership with the Department of Public Works, to include a “Laps around the Lake” program at Lake Montebello.

Both programs require only a photo ID to rent a bike and ask for a $5 suggested donation. Helmets are provided.

If the Montebello effort gets a good enough response, Rec and Parks officials hope to expand the programs to parks all over the city.

“We’re sending out our in-house people to try and see how it goes. If we expand we’re definitely going to try and find some more funding” said the department’s Fran Spero. She noted that, despite a few minor setbacks, things have been going well.

“We got rained out a couple times and we weren’t able to get going at Montebello initially,” she said. “So far, the response has been pretty good. By June the nights can get busy. We’d love to expand out to some of the other parks in the city.”