Da’Shawn Alston’s turn comes first. For the next few seconds, the 5th grader will be solely responsible for training Bella, an 80-lb Golden Retriever/Standard Poodle mix, who’s become a regular at Yorkwood Elementary in northeast Baltimore.

As classmates watch, Da’Shawn holds out the training baton. Bella touches the far end with her nose. Da’Shawn’s face lights with a smile, and he presses the baton’s clicker to signal “good job.” Bella gets a scrap of roast beef, too, courtesy of Bella’s owner, Natalie Keegan.

The dozen students in this special-needs classroom take their turns, one child after another looking beatific while interacting with the hypnotically calm and attentive Bella.

“High five!” Da’Shawn’s classmate Samir urges Bella softly, and the dog offers him her soft-ball-sized paw. The exchange ends with Samir working his hands gently into the thick fur of her ruff.

Skeptics might question the decision to take time away from the standard curriculum for classes centered on how to be safe around dogs and cats and how to treat the animals humanely. But the lessons Keegan and Bella are teaching about sensitivity and compassion are invaluable for both learning and life, says Yorkwood’s principal, Deborah F. Sharpe.

“Even though it’s about animals,” Sharpe explains, “it’s also about how we interact with each other, and how it takes time to learn through training and repetition.” 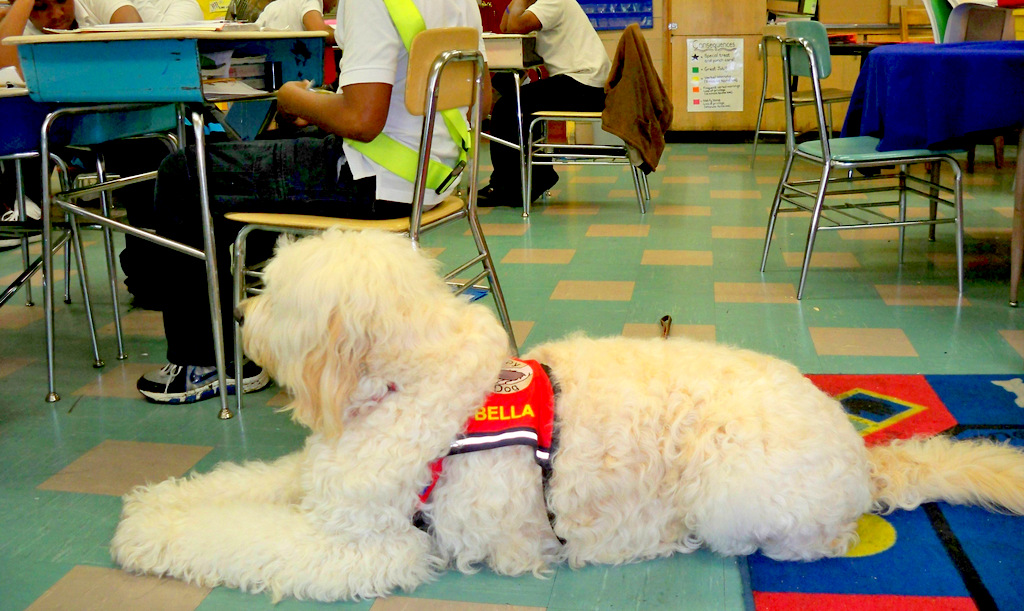 Bella, the most popular component of a unique animal care class at Yorkwood Elementary School. (Photo by Christine Lando)

That’s at the heart of the program, says Keegan, a professional dog trainer who has also worked in human-to-human violence prevention. Kids learn how to “read” dog body language and what pets need. But they also get an idea of how far kindness, patience and an emphasis on the positive can take you in challenging situations.

Across the country, schools have welcomed dogs into classrooms for a variety of purposes,  including to encourage kids in their learning, even though student safety and allergies continue be issues. But when it comes to curriculum, classes like Keegan’s in bite prevention and the humane treatment of animals are far more likely to be occasional add-ons than built into the school day.

Keegan sees her program as worth a school’s commitment in part because, unlike most other humane education programs, it gives children hands-on experience with positive reinforcement—using the psychological technique of ignoring undesired behavior and rewarding wanted behavior.

Before school is out this month, Keegan and Bella, a certified therapy dog, will have given a series of seven or so lessons to most of the classes at the 400-student Yorkwood Elementary in the Loch Raven area. In the coming school year, they will go to John Ruhrah Elementary/Middle in Highlandtown.

Keegan’s program, Kids 4 K9s, is being supported by a fellowship from the Open Society Institute-Baltimore, the local arm of the foundation set up by billionaire philanthropist George Soros. (The fellowships recognize social entrepreneurs who are trying to address the needs of underserved populations in Baltimore City.)

Natalie Keegan leads a discussion on what dogs – and people – need. (Photo by Christine Lando)

Keegan, a city resident, wanted her program to touch kids in neighborhoods where neglect and violence thread through children’s lives. Every child at Yorkwood seems to know about the Baltimore pitbull, Phoenix, who had to be euthanized after he was set on fire in southwest Baltimore two years ago. In their own neat row house neighborhood, the students have seen dogs chained up all day and without food, they say.

Mistreatment isn’t limited to pets either. For some of her students, says teacher Izelle Van Zuylen, “empathy and care are not something they are used to.” As a result, those are not always qualities that come easily  to the kids themselves.

What Dogs and People Need

On a recent Thursday, Bella stretches out lazily on the tile floor of a 3rd grade classroom at Yorkwood, awaiting her star turn at the end of the lesson. Sometimes the dog raises her head to watch as Keegan dashes around, asking questions and rewarding good answers with enthusiasm and tickets that earn prizes later.

Today’s questions are about what pets need to be healthy and happy.

“They need shelter,” one student volunteers. “A bath,” offers another.

By this time several hands are straining upward. Keegan chooses one and the boy crows, “Exercise.” Keegan presses a ticket onto his desk.

Then she leans down to catch the quiet voice of a girl. “My dog ran away,” the 3rd grader confides.

“He tries to charge out because he likes it outside?” Keegan suggests.

“Notice anything similar between the dogs and people?” she continues, referring to a page of pictures she has distributed showing dogs and kids eating, playing, cuddling. “That dogs and pets kind of need the same things as people?”

The class’s teacher, Joslyn Fennell, admits she had her doubts when the idea of Kid 4 K9s was presented to the faculty at the beginning of the school year. “I didn’t feel it was necessary for instruction,” she explains, given all that had to be covered between August and June.

On the other hand, she knew her kids would love having Bella come to their classroom, and gradually she got a sense that some of her students were missing what Fennell considered basic information about dogs and cats, even if they had a pet at home. 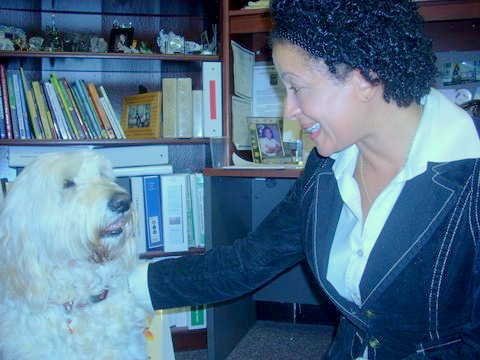 Now, almost at the end of the program, she’s seeing they’ve gained more than factual knowledge.

“I just feel like the way they treat Bella—you know, `Oh, Bella, we love you’—I feel like it transferred to the ways they treat each other: Less`Get out of my face.’ ”

It’s a little as if Bella passed on some of her own mellow approach to life.

Another surprise for Fennell was the way the Bella sessions energized her own teaching. Just two years out of the teacher-training program at Morgan State University down the street, she sometimes catches herself growing frazzled, impatient and punitive with her 24 students. Then she thinks of Keegan:

“Her bubbly self, the fact that she is always positive. I learned a lot from the program — to use the positive rather than the negative.”

Principal Sharpe was hoping for that kind of effect. And from the beginning she was sure that Bella and Keenan had the right mojo for Yorkwood students. Parents and guardians, who had to sign permission letters for their children to participate, came on board easily with the idea, too, the principal says.

“The program is a fun and interesting way to learn about animals, but about humanity and compassion and sensitivity, too,” she says.

Yorkwood, with its 400 students in pre-K through 5th grade is already on a school-wide plan for raising the level of positive discipline, which means that Keegan’s program fits right in with the behaviors modeled for students and for teachers. Time for the program comes out of the social studies block of the curriculum. Sharpe believes the tradeoff is worth it because memories of Bella and the lessons she was part of will stick in a way that many pencil-and-paper activities don’t.

This month Keegan is using assessments and surveys to test whether the lessons at Yorkwood have made the differences she has hypothesized. The results, if positive, could help build a Kids 4 K9s foundation. Keegan wants to expand the program to additional schools and activities. 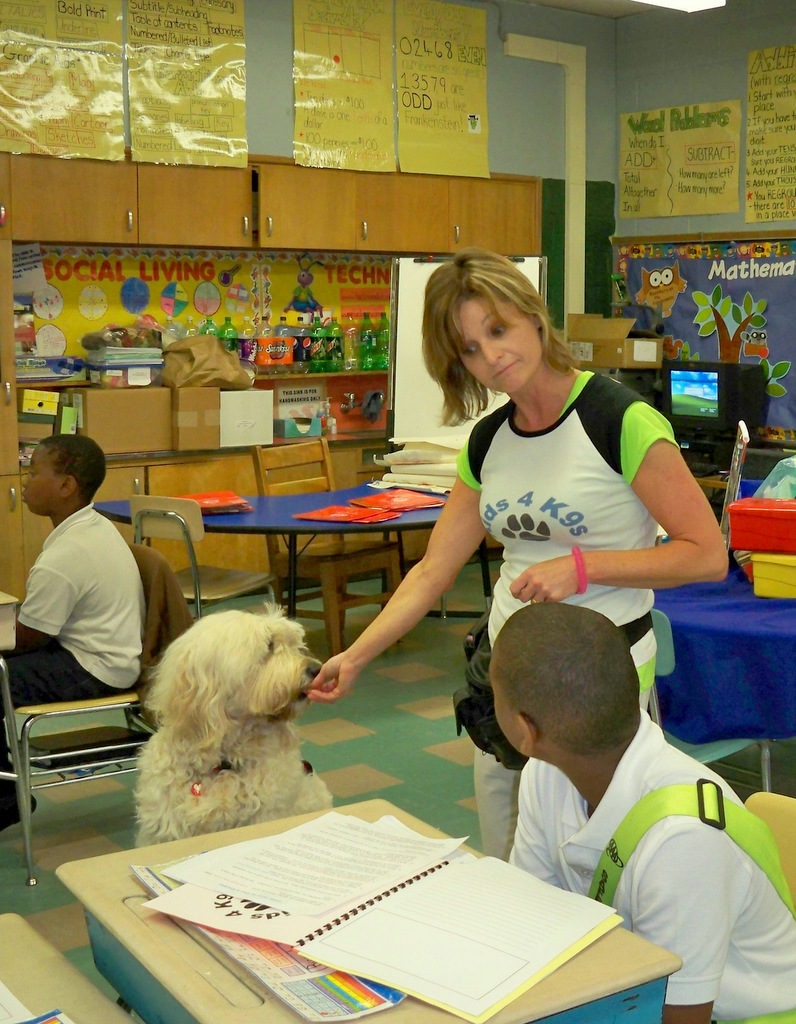 This summer, for instance, Kids 4 K9s is offering short-term volunteer internships for students age 12 through 17 at the Maryland Society for the Prevention of Cruelty to Animals’ shelter in North Baltimore. The volunteers are to work under adult supervision to help get dogs ready for family life.

One part of the program at Yorkwood hasn’t worked out, though. Keegan had planned to offer free workshops to parents and guardians on topics like kids and dogs living together and dog training, but there were no takers.

Keegan says she’s pinning her hopes more on children anyway – kids like Da’Shawn, who got a beagle puppy from a teacher at Yorkwood about the time he lost his father.

His beagle is friendly, but Da’Shawn remembers when his little cousin had a scary experience with an angry pit bull. Da’Shawn is confident that when he grows up and if he gets a pit bull, which he would like, his dog will be different.