We’ve been curious about the rising popularity of malbec, a once-obscure Argentine import, lately touted as the poor man’s barolo.

So at our inaugural The Brew Decants beverage-tasting event (sponsored by The Classic Catering People), we decided to test a few – and to do it “blind.”

In other words, our panel wouldn’t know whether they were getting the $13 Cahors Malbec Gouleyant or the $38 Bressia Profundo.

They were tactful about it, but our tasters – including Bridget and Galen Sampson, co-owners of North Baltimore’s Dogwood Restaurant – clearly came in with lowered expectations.

Malbec’s boosters portray it as hearty, rustic and international, but with a sophisticated balance of fruit and tannins. Any purist would doubt you could get that for a fraction of the price of a good Bordeaux or Pinot.

“A floral smokiness, with a bit of cocoa. No complexity,” said Bridget, of our second Malbec, (which was later revealed to be a $20 2010 Felino, Vina Cobos.) 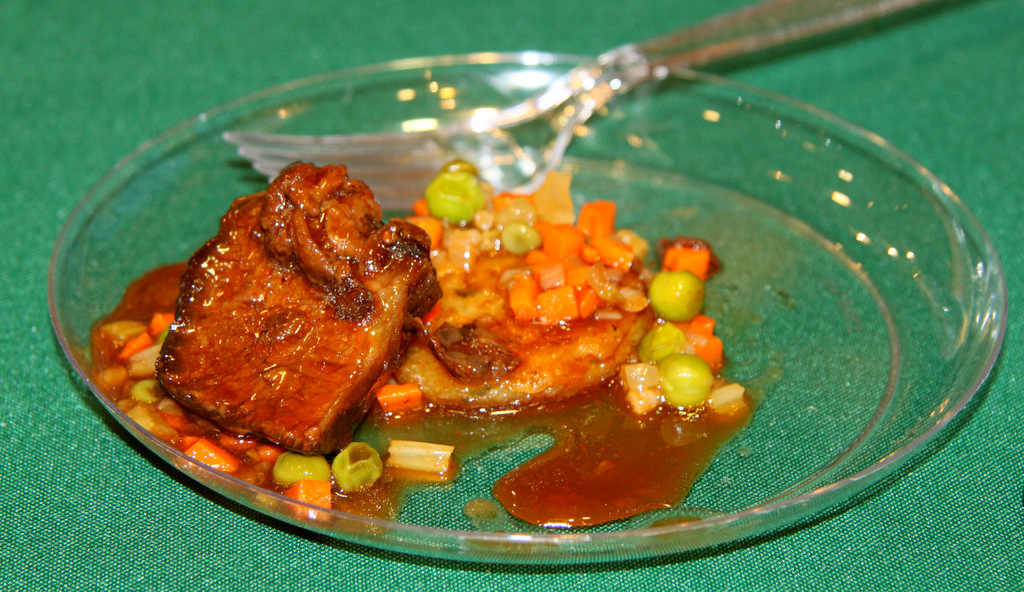 Galen, the Dogwood’s executive chef, was more brutal: “No structure, but full-fruit – a good Welches [grape juice]. A box Malbec!”

As the evening wore on, though, and the more complicated Malbecs were poured and we enjoyed the food pairings provided by The Classic Catering People (I was also a panelist, as was wine enthusiast Greg Krauss), the tasters, like good wine, opened up.

And several of the Malbecs – and one in particular – bowled us over.

“This is completely different,” Bridget said, sitting up a little straighter in her chair at The Ivy Bookshop on Falls Road, the cozy setting for our tasting. “It has a subdued nose . . . some black cherry . . . it has rose hints!”

“The first taste has a hint of oak and soft elegant tannins,” Galen agreed. “It’s sort of light and feminine. This one is a movie star. It’s kind of long-lingering in the mouth. It’s gentle and well-balanced.” 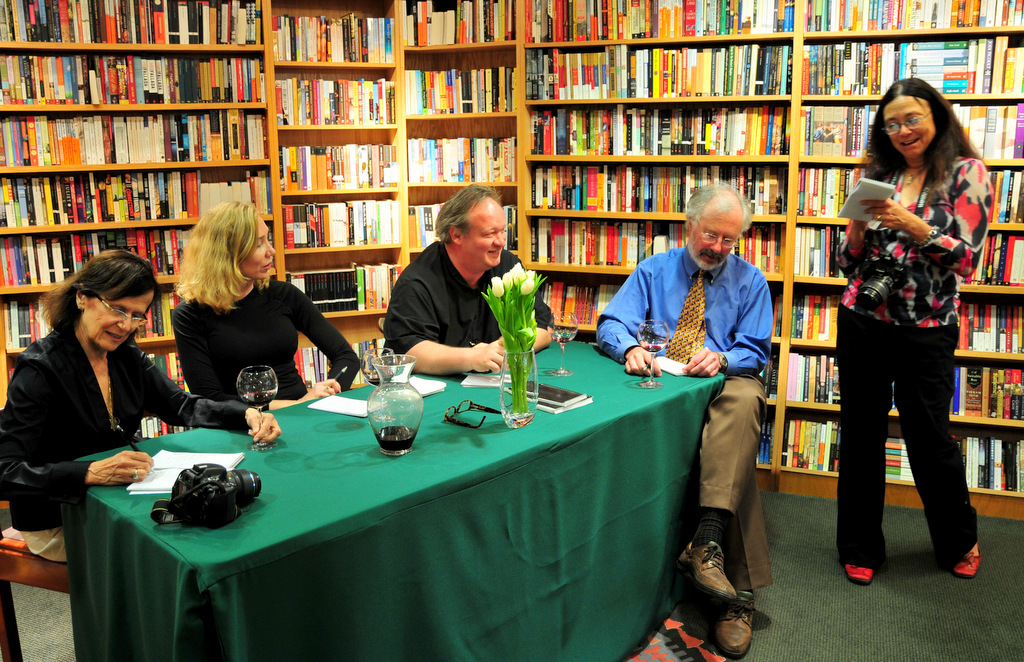 Our first "The Brew Decants" tasting, sponsored by The Classic Catering People, held at The Ivy Bookshop. (Photo by Doug Birch)

I took in the long legs, pretty cerise color and soft aroma and realized I liked it before I even took the first sip. Greg (who is Brew editor Fern Shen’s husband) said he could imagine it “with duck, mushrooms or any earthy flavor.”

When we weren’t reaching for the metaphors or our pens and scoring pads, we were reaching for Classic’s small plates. The surprisingly intense flavors worked well with the more complex Malbecs and showcased the wine’s reputation for being great with hearty red-meat meals. 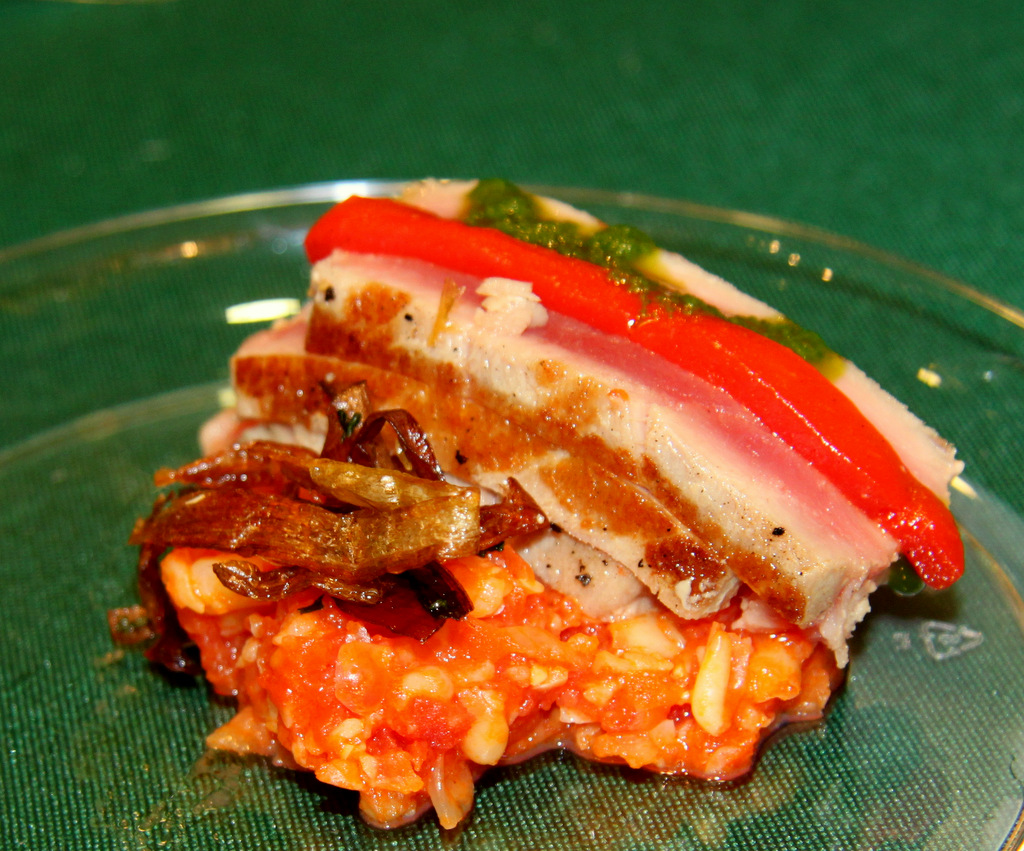 As with the wine, time slows down when you bite into something with so many flavors and textures.

What a change from the processed, mass-produced food we slam down in a gulp!

The Grilled Tuna with charred tomato, crispy leeks and a bouquet of other components, also woke up our senses and harmonized with the wine.

So, what was this most satisfying Malbec (of the nine we tasted, mostly from Argentina but also one each from France, Washington and California)?

OUR WINNER WAS: The 2009 La Posta Malbec, from the Pizzella Family Vineyard in Mendoza, for $14.

Ahh, the $14 wine beat the $38 bottle! It was a gratifying outcome for the first in our new “The Brew Decants” series.

The idea is to apply Baltimore Brew’s ebullient empiricism to something other than city spending and campaign finance! 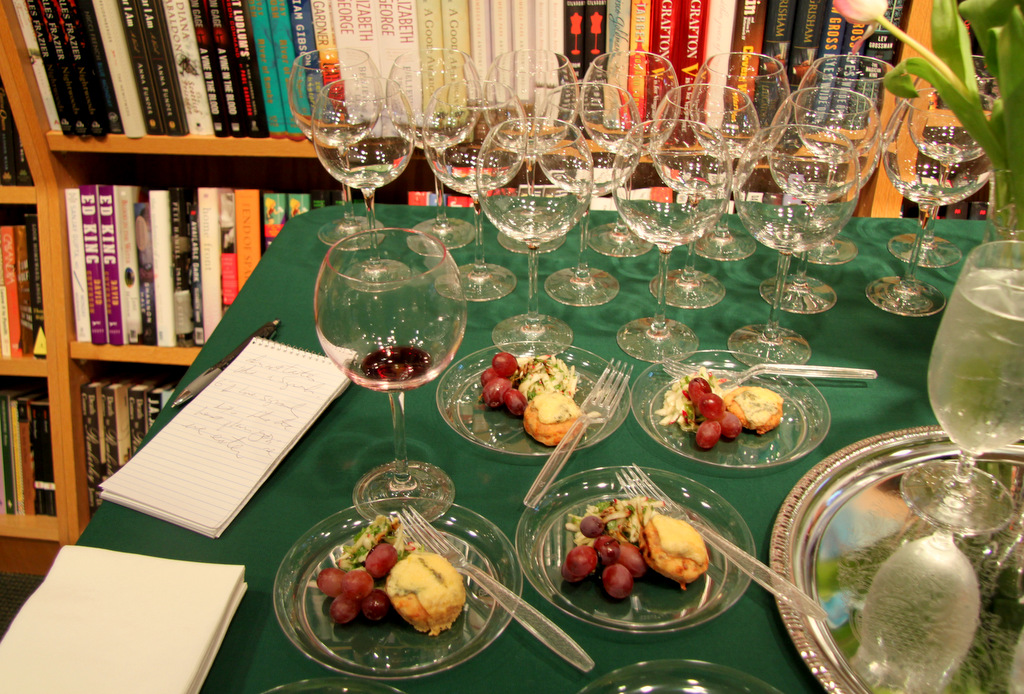 Small plates of bacon crackers topped with minced arugula, fennel and other root vegetables in a vinaigrette.

Along with carefully-paired food from Classic and the insights of skilled local tasters, we’ll feature conducive Baltimore locations such as The Ivy. And we’ll use the excellent 1-to-4 rating system Bridget and Galen helped us establish to give these wines (and beers and spirits) a spritz of consumer scrutiny.

Kicking off the series with this jammy, sunny, affordable-yet-ambitious South American wine seemed especially apt given the rainy, cool spring weather lately. Increasingly, Malbec is finding a place in America’s wineglasses. Almost as much Malbec is sold here, nowadays, as in Argentina. Our tasting helped us figure out why.

The inky-crimson-skinned Malbec grape originated in the Bordeaux region of France and was once an important part of many Bordeaux blends. (It is still one of only six grapes that may go into the blend.)

Over time it grew susceptible to frost and succumbed to various blights, but thanks to a French agronomist, Malbec vines found a home in Western Argentina, where they thrive. The Andean elevation (4,000 to 5,000 feet) has promoted this grape from the chorus to stardom. 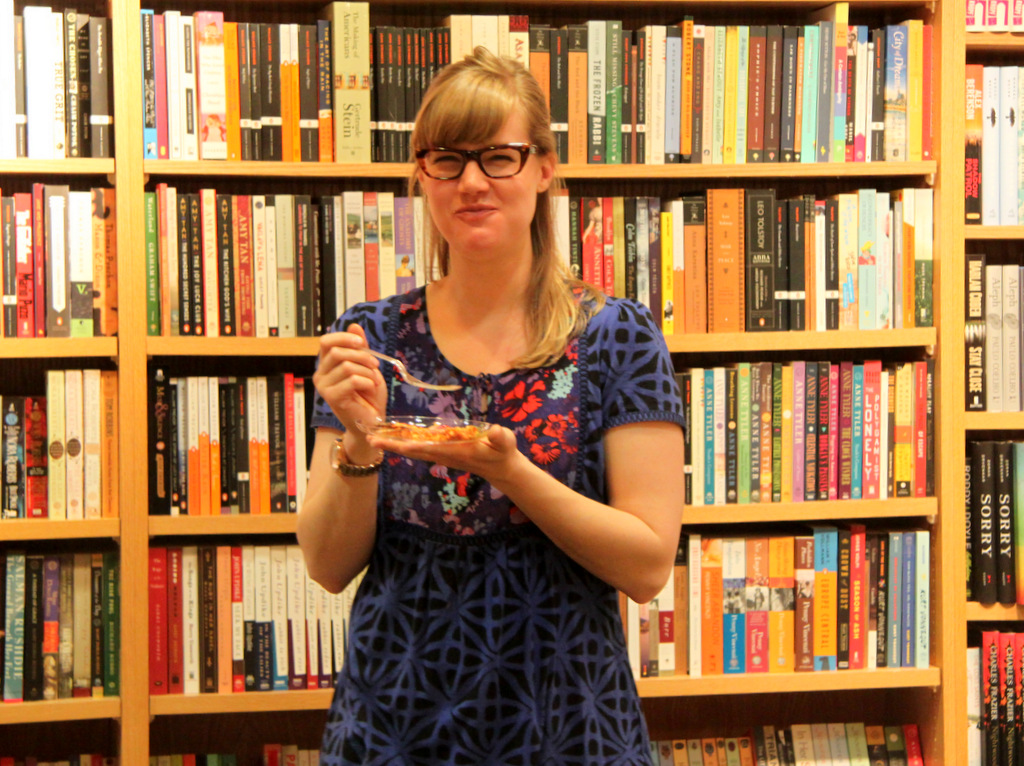 The Brew's Meredith Mitchell took a break from pouring to enjoy the food. (Photo by Doug Birch)

The bottles we sampled had the classic deep-purple Malbec luminosity, ranging from cherry-red to black plum, and that slight cocoa finish and assorted spicy undertones. Though there were a few dissensions, our reactions were surprisingly close. We found a couple of them watery, simple, and not very interesting.

But we also discovered some wonderful Malbecs that would please the pickiest palate. 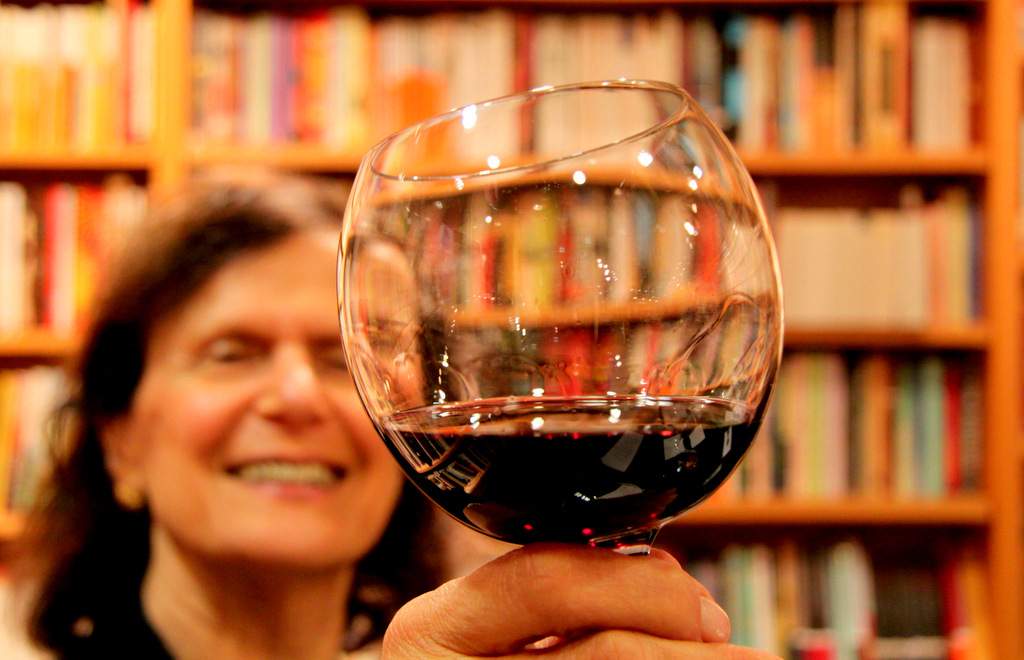 Another conclusion we drew from our tasting? The Sampsons care passionately about good food and drink and have tasting vocabularies that rival those of their colleague down the street.  Galen was especially proud of his uncanny ability to sus out which wines we were drinking, before “the reveal.” He definitely called the Cahors.

And they helped us understand Malbec’s prominent place in the wine universe right now. “People feel really comfortable with them, where they might not with a cab,” Bridget said. 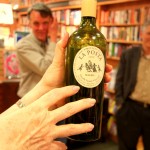 Comfortable, in part because of the price, Greg added, getting down to it: “For $14, to have that wine – that’s tremendous – and it’s got a screw top!”

But also comfortable because of the character of the wine. Malbec’s got that proletarian panache going for it – as much hike-in-the-woods as stroll-in-the-museum, as much Remington as Harbor East.

In terms of restaurant wine lists, where the economics dictate painful mark-ups, that means a well-chosen Malbec can deliver big pleasure at a very sweet price.

– To inquire about any of the foods described in this series, contact our sponsors:
The Classic Catering People
99 Painters Mill Road
Owings Mills, MD
410-356-1666