June is not just the month when Baltimore city politicians (in practice, the mayor) decide on the budget for the next fiscal year starting July 1.

It’s also a time when city agencies frontload the Board of Estimates (controlled by same) with contracts that soak up funds from the current year’s budget.

The goal: to make sure the tap stays open.

Getting end-of-year funds obligated for future projects is a time-honored process that does make sense when they involve infrastructure and other long-term work.

Speaking of taps, the biggest benefactors of the process at this week’s Board of Estimates meeting were five water consultants with existing contracts with the Department of Public Works.

As an example of the art of obliging funds today for future use, take the water bureau’s request for $693,817 to Rummel, Klepper & Kahl.

This “urgent need water design” contract does not expire until next January 18, or 7½ months from now.

More examples of serious spending of city funds were on exhibit Wednesday.

Here are some other contracts approved by the spending panel, which is controlled by Mayor Stephanie Rawlings-Blake by virtue of her vote and the votes of her two appointees, Public Works Director Alfred H. Foxx and City Solicitor George A. Nilson. (The other board members are City Council President Bernard C. “Jack” Young and Comptroller Joan Pratt.)

• $129.7 million to Fru-Con Construction LLC for nitrification filters and related work for the enhanced nutrient removal facilities at the Patapsco Wastewater Treatment Plant.

• $20 million to Isobunkers for gasoline and diesel fuel for city vehicles. This is an extension of a $68.75 million contract authorized by the board in 2009 to the Norfolk, Va., fuel wholesaler.

• $10.7 million to Baltimore-based Abacus Corp. for “unarmed uniformed security guard services for various agencies.” This is the upper limit of a contract whose use and costs will vary, according to the board’s agenda, which provided no further information. 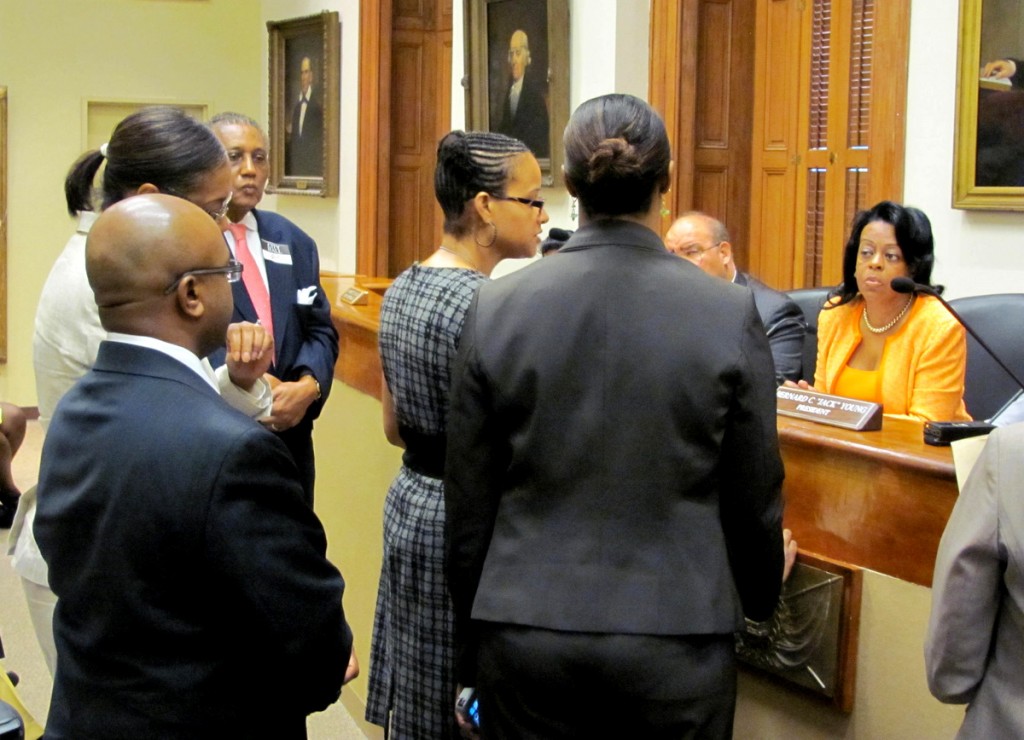 Minority lawyers protest a legal services contract before the board. Arnold Jolivet wears the pink tie. (Photo by Mark Reutter)

• $6.5 million to New Jersey-based Spiniello Companies for the replacement of Automatic Reading and Billing (ARB) water meters with outside meters. This is part of a larger group of water meter contracts, for which Spiniello was the low bidder, that has not been authorized yet by the board.

• $4.45 million to ADP Inc. for software for the departments of Finance and Human Resources. The contracts are extensions of existing agreements with ADP that are not subject to competitive bids because the “procurement is of such a nature that no advantage will result in seeking” other vendors. (Since 2007, the Board of Estimates has awarded $22.75 million to the New Jersey-based payroll software company.)

• $3.99 million over four years to Semmes, Bowen & Semmes to provide defense lawyers and other legal services for workers’ compensation cases. An evaluation committee overseen by City Solicitor Nilson picked Semmes out of four law firms responding to an RFP (Request for Proposals) by the law department.

The Semmes contract drew criticism from five black lawyers, who spoke before the board, because it waived any obligation for minority and women’s participation. (Under city rules, 27% of a municipal contract should be set aside for certified minority firms and 10% for certified women-owned businesses. This rule, however, is  waived frequently.)

Four of the lawyers said they were certified minority businesses who had represented clients in worker comp cases.

They said they should have been notified about the pending contract as part of the mayor’s oft-publicized efforts to “reach out” to minority businesses.

Thomas B. Corey, chief of the Minority and Women’s Business Opportunity Office (MWBOO), said the contract was advertised in the Daily Record. He argued that he was under no obligation to notify minority firms of the contract, especially since none of the firms listed workers’ compensation as a practice specialty.

“If we continue to grant waivers, how can we break through the doors,” persisted attorney Kendra Randall, of Randall & Sonnier.

She and the others also questioned the length of the contract, extending until June 30, 2016.

Mayor Rawlings-Blake took umbrage at the criticism of Corey and told Arnold M. Jolivet, the attorney who organized the protest, “I’m not going to waste my breath every time you’re wrong. You’re absolutely wrong.”

She said MWBOO followed proper procedure. City Solicitor Nilson added that the minority firms did not represent agencies or firms “close to the size of the city.”

The Semmes firm has held the workers’ comp contract for many years, according to Deputy Solicitor David E. Ralph. The current contract was executed after Nilson was named city solicitor by then-Mayor Sheila Dixon in 2007.

Although Young and Pratt voted against the contract, it was approved by Rawlings-Blake, Nilson and Foxx.

After the meeting, Ralph expressed displeasure at the objections by Randall and Jolivet, and emphasized that the city’s aim was to select the most experienced law firm.

“This is outrageous [the protest] because it is not fair,” Ralph said. “It’s a gotcha. After the fact, did we do what is necessary? People can always come up with something. Our goal was to get the best qualified lawyers for the city.”

Mayoral spokesman Ryan O’Doherty also denounced the protest, saying, “We don’t force the taxpayer to take on risk. We don’t do it!”