City Comptroller Joan Pratt dropped another bombshell this afternoon – that Mayor Stephanie Rawlings-Blake offered her two staff positions in return for her silence over the mayor’s expenditures for Voice-Over Internet Protocol (VOIP) phones.

“This is another false allegation,” retorted the mayor’s spokesman, Ryan O’Doherty, who held an impromptu news conference just minutes after Pratt distributed documents in support of her claim that the VOIP initiative has cost the city $659,000 – not the $20,803 claimed by O’Doherty last week.

The horse-trading of jobs and influence is a time-honored tradition among elected officials. But bluntly calling out a fellow politician is not.

Then again, terming the mayor’s phone project “illegal” – which Pratt did publicly at the Board of Estimates last week – and saying that Rawlings-Blake spoke “an untruth” in describing her role in the affair is taboo-breaking, too.

Especially coming from Pratt, who plays close to the vest and maintains such a low public profile that most Baltimoreans would be surprised to learn that she’s been the city’s third highest elected official since 1995.

Faced with purchase orders indicating that the Mayor’s Office of Information Technology (MOIT) spent city funds for 80 high-tech telephones, two IP PBX servers and 124 Cisco switches – O’Doherty said that the expenditures were part of the mayor’s plan to save taxpayer money by developing the VOIP system in-house. 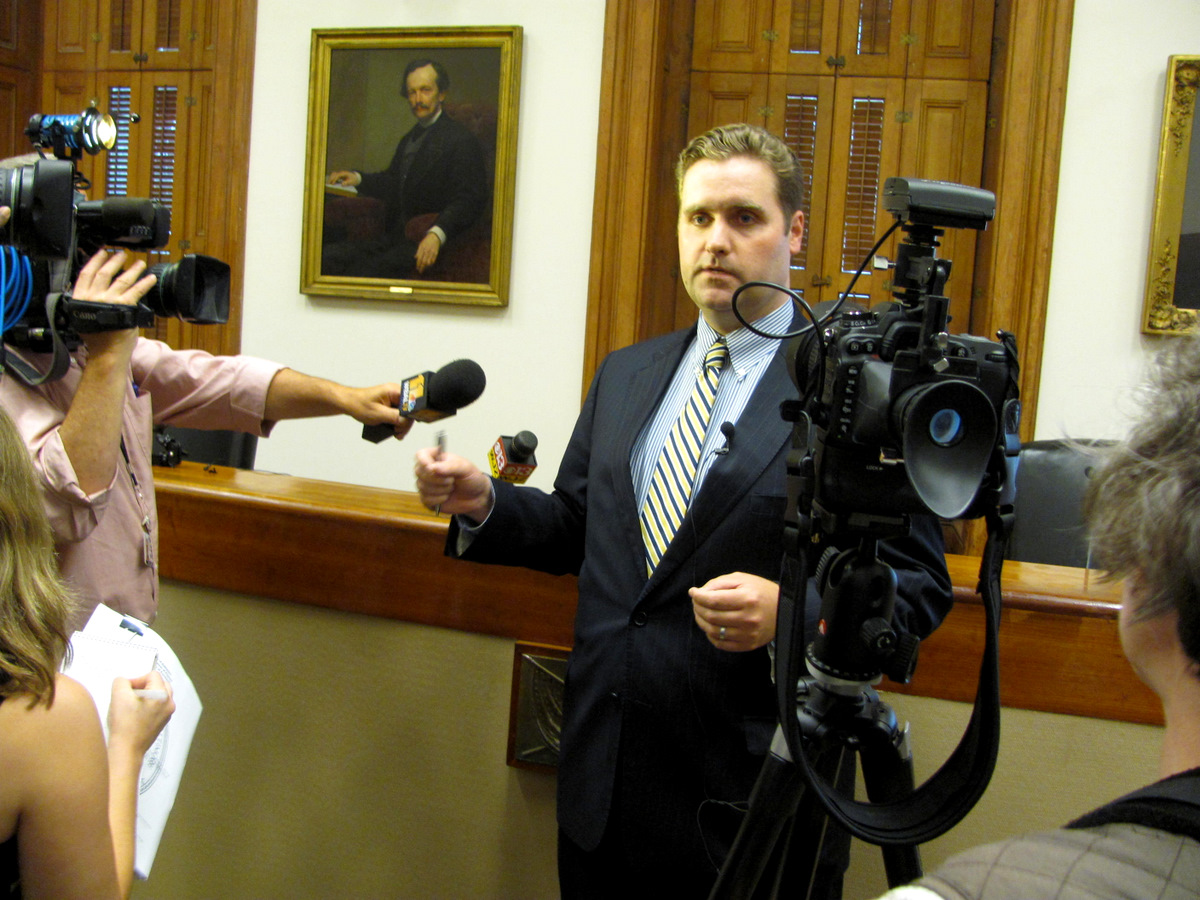 Ryan O’Doherty defended the mayor and her spending on new phones after Pratt left the Board of Estimates room today. (Photo by Mark Reutter)

“We can save millions of dollars by not having the comptrollers’ office” install the VOIP system, he asserted.

The comptroller and the bureau of purchases had selected IBM to make telecommunications upgrades in the city system – a $7.4 million award reached after a laborious RFP (Request for Proposals) process that began several years ago.

It was Rawlings-Blake’s request at last Wednesday’s Board of Estimates meeting to delay action on the IBM contract that sparked Pratt’s initial outburst.

The comptroller’s office may be responsible for the municipal government’s phone service, but it is incapable of overseeing VOIP, O’Doherty said today.

“We are not convinced that spending $7 million is in the best interest of the city going forward,” he said during his press conference. “We are convinced MOIT can do it faster, cheaper, better.”

While portraying the comptroller’s staff as inhabiting a technological backwater, O’Doherty was careful to add, “I’m not disparaging IBM.”

The fracture between the two – Pratt said she had a 4 p.m. meeting scheduled today with the mayor, but it was abruptly canceled – comes at a politically inopportune time for Rawlings-Blake.

Her office is scrambling to preserve rec centers and fire company cuts in the face of a surprising City Council rebellion stage-managed by Council President Bernard C. “Jack” Young (who has exchanged his own harsh words with the mayor in recent months).

O’Doherty says all Pratt wants to do is “force through” an expensive contract with IBM that the city can ill afford. Pratt’s beef is that Rawlings-Blake is violating competitive bidding rules and trying to “usurp” powers long vested in the comptroller’s office.

Absent from the fray was the mayor herself, who was not immediately available to speak to the media, according to O’Doherty, and Rico Singleton, the former head of MOIT, who signed off on the $659,000 worth of equipment before he was forced out of his position.

Singleton was caught up four months ago in a contracting scandal at his former job, accused of using his influence at the New York State Office for Technology to win favors from a vendor for himself and his girlfriend.

New York State Comptroller Thomas DiNapoli exposed the arrangement in a scathing audit. Some have suggested that a similar independent audit of VOIP could help reduce the pawing and scratching going on at City Hall at the time when the city faces severe economic problems and a budget that needs to be passed in two weeks.