Sign-waving residents came out in force Saturday to oppose a planned Royal Farms convenience store in northeast Baltimore, saying that it would undermine neighborhood revival efforts that could serve as a model for a shrinking city.

“This area is one of the places that could attract young families – it’s undergoing a bit of a renaissance,” Nick McDaniels said, as his wife Amie McDaniels held their squirming young daughter, Charlie.

Independently-owned businesses like Clementine (a family-friendly, farm-to-table restaurant in Hamilton) and Red Canoe (the bookstore and cafe in Lauraville) were a major reason why the couple bought a house in the area a couple of years ago, McDaniels said. 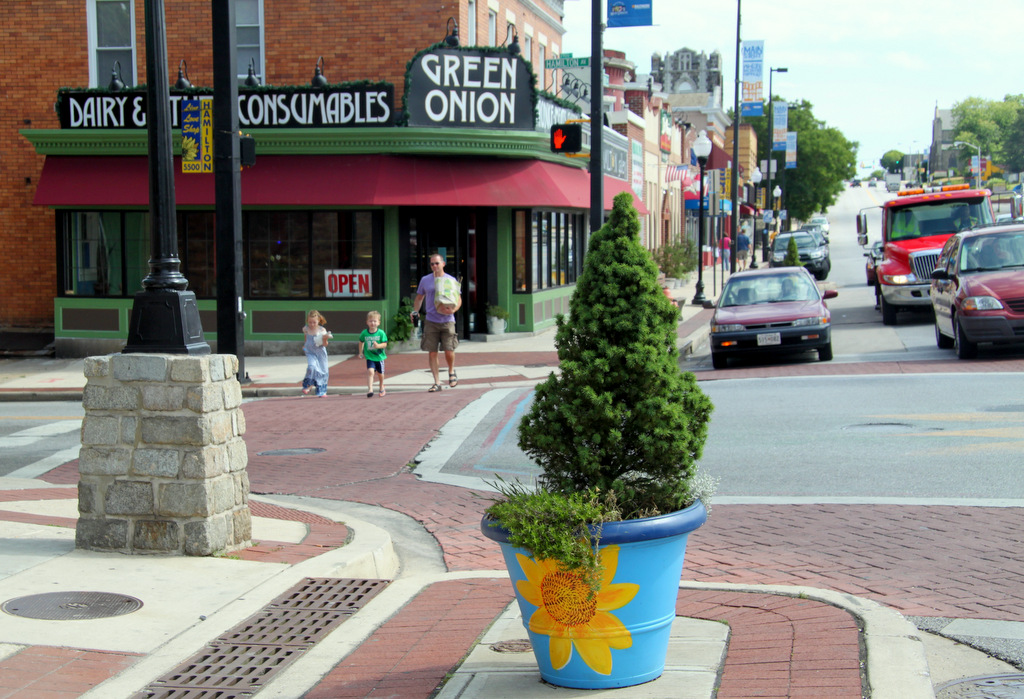 New businesses in Hamilton (shown here) and nearby Lauraville have been brightening the Harford Road corridor. (Photo by Fern Shen)

But now, just up Harford Road from Lauraville and Hamilton, Royal Farms is proposing a 24-hour, 5,121-square-foot convenience store with 7 pumps (each with two fueling devices) and 74 parking places.

The property is a union hiring hall and parking lot, at the Glenmore Avenue intersection, right across from the local branch of the Enoch Pratt Library, at a 5-way intersection where Old Harford Road comes in.

“It’s going to be like a truck stop!” said nearby resident Roop Vijayan. “It’s going to make Harford Road look like Pulaski Highway!”

Over the weekend, with less than a day’s notice, about 65 people including McDaniels and Vijayan convened at that intersection to talk to a reporter and voice their opposition to the project.

The lawyer representing Royal Farms at community meetings in recent weeks didn’t return The Brew’s calls but the marketing manager for the chain, Ed Stronski, did send a copy of the site plan and answered questions. 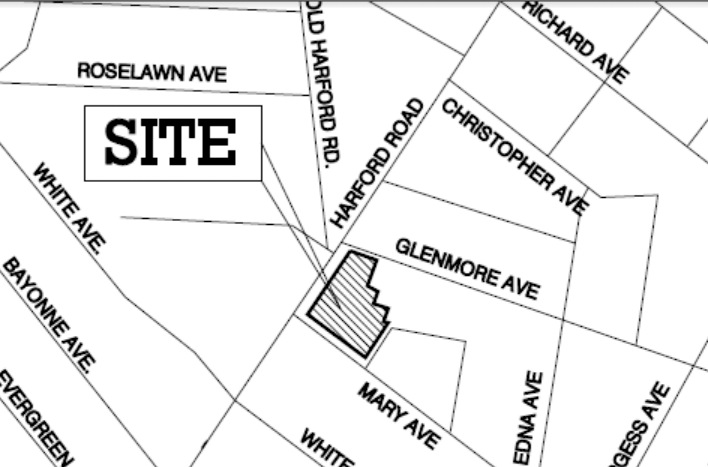 From the site plan submitted by Royal Farms for Baltimore city officials to review.

“We certainly want to work with the city to resolve any traffic concerns,” Stronski said of the project, which would require “conditional use” approval by the city’s Board of Municipal Zoning Appeals.

Pushing strollers and holding signs that said “Jobs, not cars” and “Neighborhood, not mega store” was a crowd that included newcomers like the McDaniels family but also many longtime residents.

Tyler Somerville, whose family has lived in the area since 1927, was one of several who said the gas station threatens to erase the gains Hamilton and Lauraville have made as a result of small independently-owned businesses that have boosted property values and walk-ability.

But although grass-roots organizing against the project appears strong, one community group – the one whose turf includes the parcel – voted to support it.

And now City Councilman Robert Curran is citing that recent 13 to 11 vote by members of the Glenham-Belhar Community Association as a major reason why he supports the convenience store-gas station project.

“Those are 24 people who are their representatives and who showed up at the meeting and who paid their dues,” Curran said, in a phone interview with The Brew. “Their vote on this carries a lot of weight with me.” 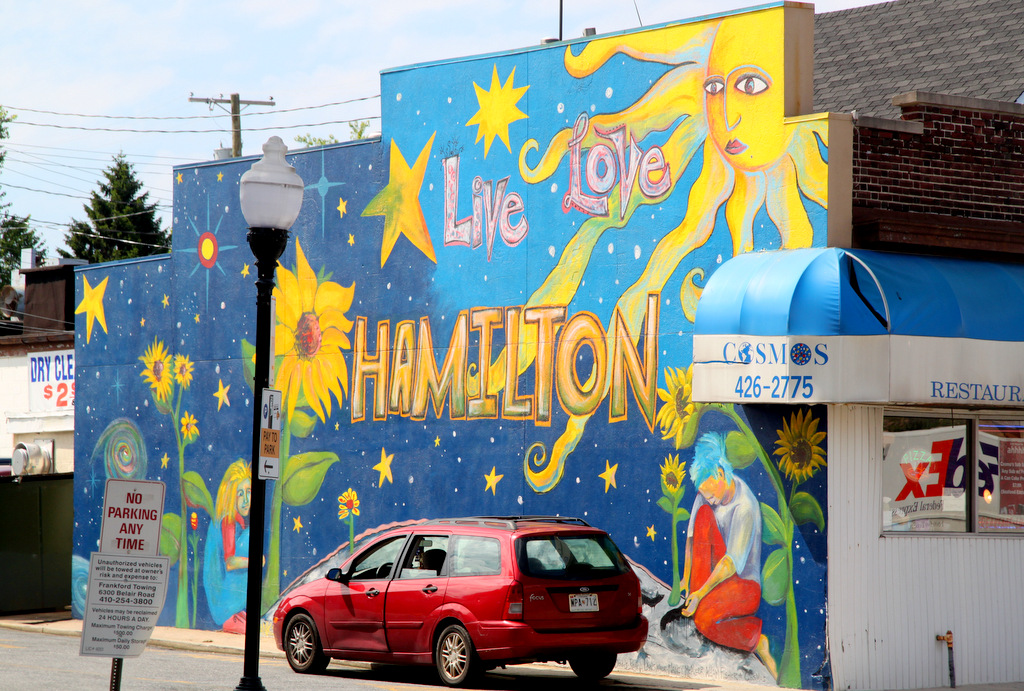 Downtown Hamilton is a few blocks south of the gas station site. (Photo by Fern Shen)

Meanwhile other nearby community groups are up in arms. “It’s just over our border, but boy is it going to affect us,” said John Reuter, president of the Westfield Improvement Association, which voted unanimously to oppose the gas station.

In other neighborhoods which have yet to vote (Lauraville and Hamilton Hills, for instance), the Royal Farms is lighting up the listservs.

“People are asking how those 13 votes count more than all of us?” Vijayan said. “A lot of people had no idea this was happening.” 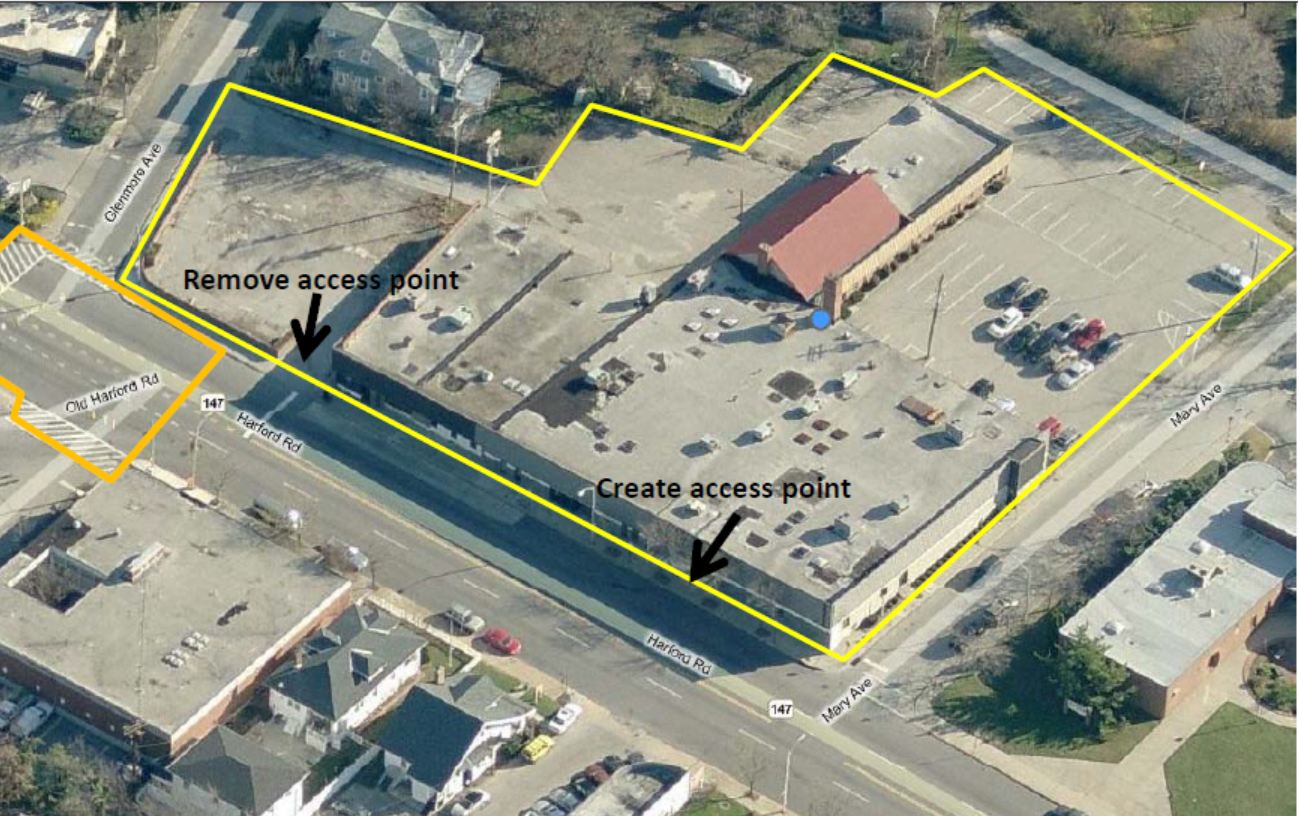 From site plan for Royal Farms project, between Glenmore and Mary avenues, on Harford Road, marked up to reflect traffic mitigation discussion.

Glenham-Belhar’s secretary, John Whelan, said the group may have to revisit the issue at a special meeting, in light of the broader community’s antipathy to the project. “I don’t see how we can ignore the whole thing, in spite of the vote,” he said.

But the group’s president, Joe Oaks said he is “staying neutral” on the gas station flap and has not decided yet how to handle it. Oaks had a bitter reply when told that some at Saturday’s meeting said they hadn’t known about Glenham-Belhar and vowed to start attending meetings and pay the annual $12 annual dues needed to be able to vote.

“They always say that,” said Oaks, who has headed the association for nine years.

“Do I get in a pissing contest between competing community organizations?” Curran asked, rhetorically.

Taking the Opposition “with a Grain of Salt”

Curran said Royal Farms’ representatives “have informally been to talk to me when it was in the concept stage” and praised the company for “going to the community first.” (Their plans are at the “site review” stage with the city, which is planing a traffic study, according to Mike Hilliard, community services director for the local community association umbrella group Harbel.)

Curran said he thinks most of the complaining so far is driven by area business owners who fear the chain store’s lower food and gas prices.

“I take with a grain of salt all the opposition at this time. I believe it is competition-driven,” he said. “Competition? Hello! That’s good for the consumer!” 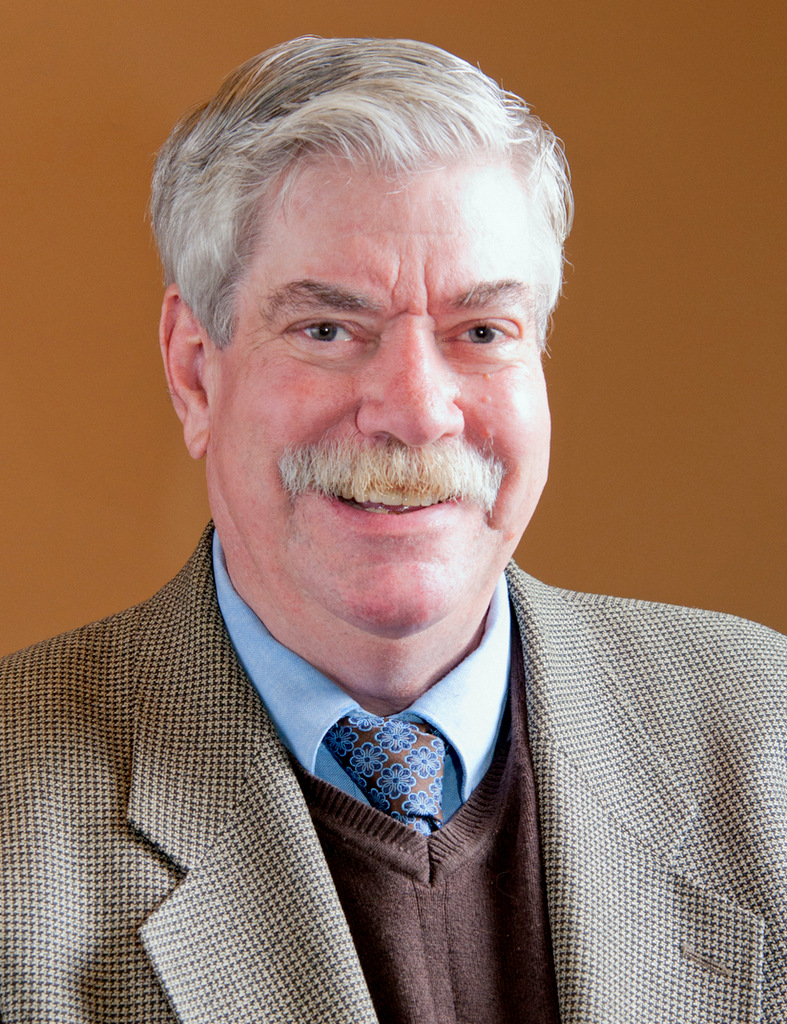 Other than observing that the project might need to be scaled back a bit (“I think 14 gas pumps seems a little excessive”), Curran expressed few strong feelings about its merits.

As for residents who accuse him of “carrying water” for Royal Farms, Curran advised them to “go back and check their history.” He recounted how he listened to community concerns a few years ago and opposed gas pumps at another Royal Farms store in the district.

Asked about his relationship with the building’s owners, the International Union of Operating Engineers Local 37, meanwhile, Curran does not hesitate to characterize it as close.

A Curran campaign sign is still on the side of the hulking structure at 5901 Harford Road. There’s a sign for City Council President Bernard C. “Jack” Young as well. (The union represents heavy equipment operators and other construction trades) 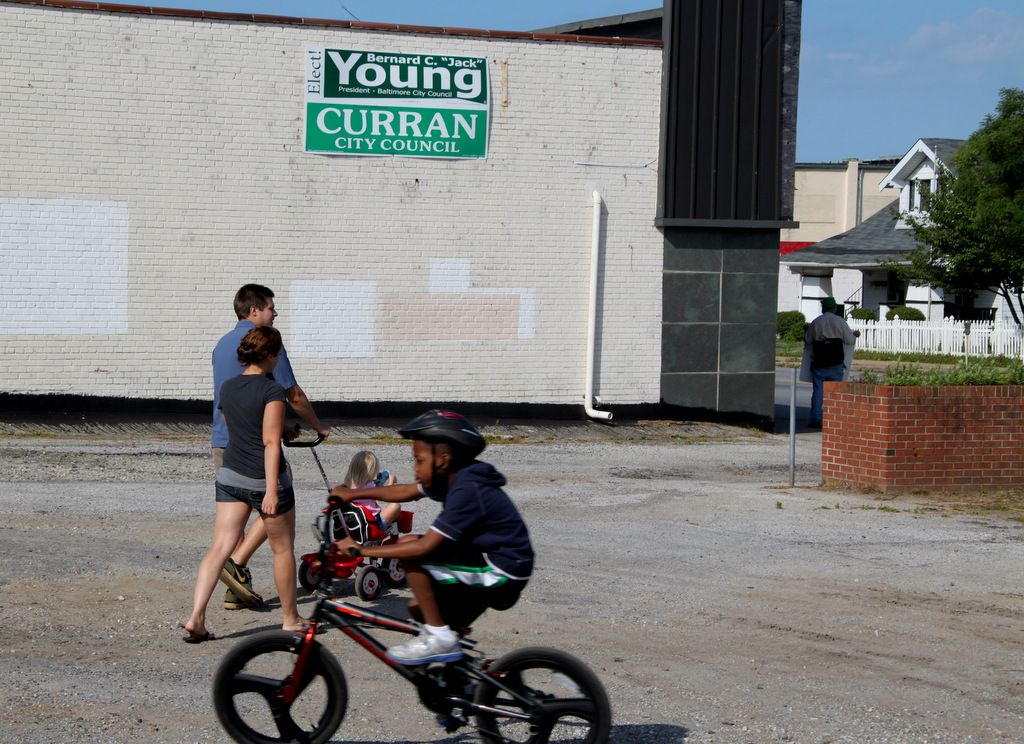 Campaign signs on the side of the building at 5901 Harford Road, site of the proposed gas station. (Photo by Fern Shen)

In the back, signs designating union officials’ parking spaces are still visible, as is a space for attorney and Baltimore Orioles owner Peter Angelos. (Angelos’ law firm had rented space there until a couple of years ago.)

Some observers appear to have little enthusiasm for the idea of a Royal Farms in that spot, but worry that leaving the space unoccupied would be worse.

“What would the future be for that site? The union is relocating – it’s just a matter of time before they sell it,” said Hilliard, who said his organization takes no position on such matters when the community is divided.

Residents fear that a convenience store/gas station is going to tip their part of town toward a condition that is all too familiar in Baltimore. 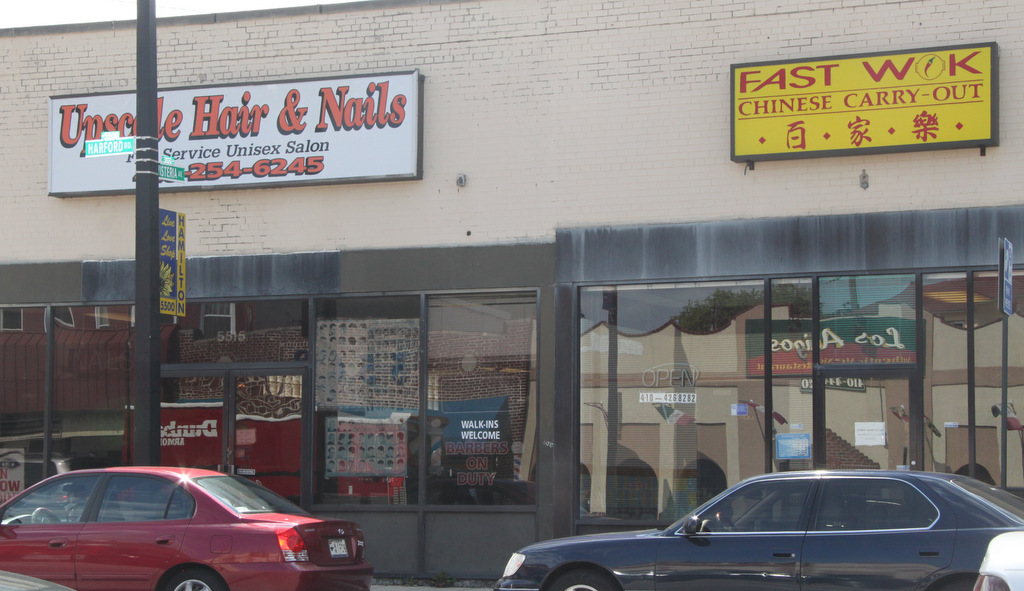 “We’re going to have crackheads and hookers,” said Jackie Burnett, a 13-year resident who lives on Bertram Ave.

“Nobody wants to be in a neighborhood that looks like that so we’re going to have property values go down.” Others worry about bright lights, fumes and potential water pollution. (Some on Saturday expressed plans to pass out leaflets and possibly gather picketers at the site again.)

Aided by receiving “Main Street” status from the city, “downtown” Lauraville and Hamilton have been livened up in recent years with art galleries, restaurants, seasonal fairs and a Tuesday farmer’s market. But they also have their share of check-cashing places, low end retail, vacancies and crime.

“The residential side’s been healthy – property values are up – but the commercial district is troubled,” said Bill Barry, an active member of the Lauraville Improvement Association. Worry about the area’s future was rampant among the picketers Saturday.

A regular Brew commenter who goes by “JS” (and asked not to be identified because of her city job) lives around the corner from the project and said she’d rather see fewer car-oriented chains and more hip mom ‘n pop places like the Green Onion.

“The neighborhood is going to shrivel up and die if this kind of place takes over,” she said. “It will be like a traffic corridor where people just whizz by.” 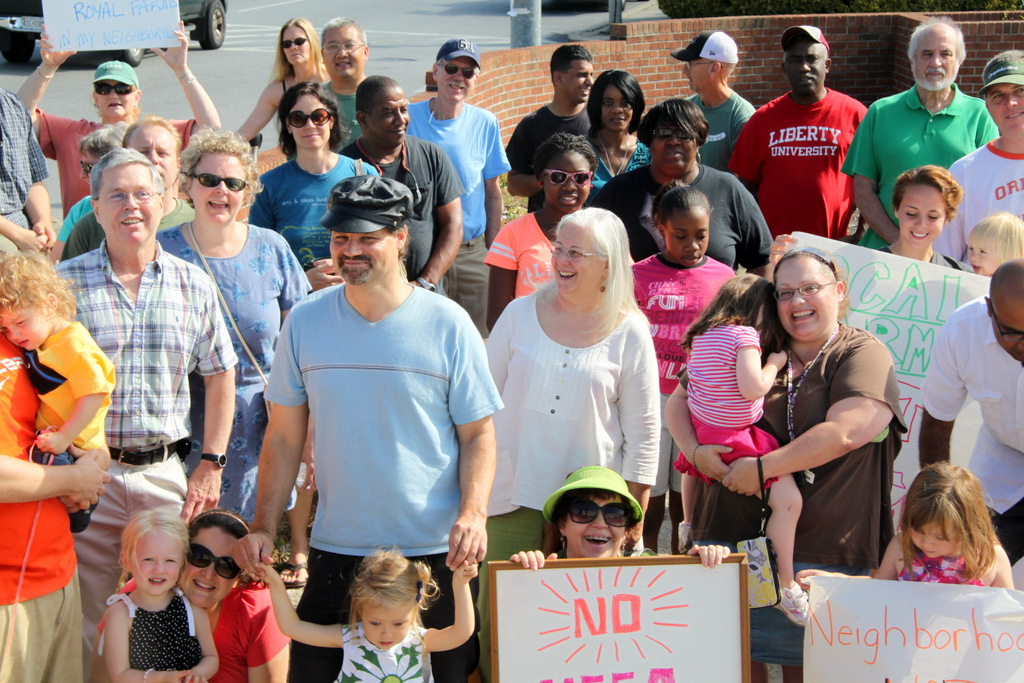 The protest drew members of several northeast Baltimore neighborhoods, many meeting each other for the first time. (Photo by Fern Shen)

For Gwendolyn Unoko, her fear is that the area could become a harsher place to raise her three children, who attend the nearby City Neighbors charter school.

“My kids use the [Pratt] library here four days a week,” she said. “It’s a wonderful family oriented neighborhood. We want to keep it that way.”