We chose to decant rosé months ago, thinking that a cold, condensation-covered glass of it might be just the thing for a warm July day.

Now that the Mid-Atlantic seems to be entering an end-times epoch of record-setting hot weather, our choice could practically qualify us for a grant from FEMA.

An astonishing number of vintners around the world are producing complex varieties these days, so it seemed like it shouldn’t be that hard to find a rosé that not only hydrates a parched populace, but is good. (The awful ones are well known to be sickeningly sweet or stupefyingly dull.)

If the rosés disappointed, we figured, at least we could count on tasty and ambitious food pairings from our sponsor, The Classic Catering People, and a (literally and figuratively) cool venue – the Wine Underground’s lovely stone-walled subterranean tasting room. 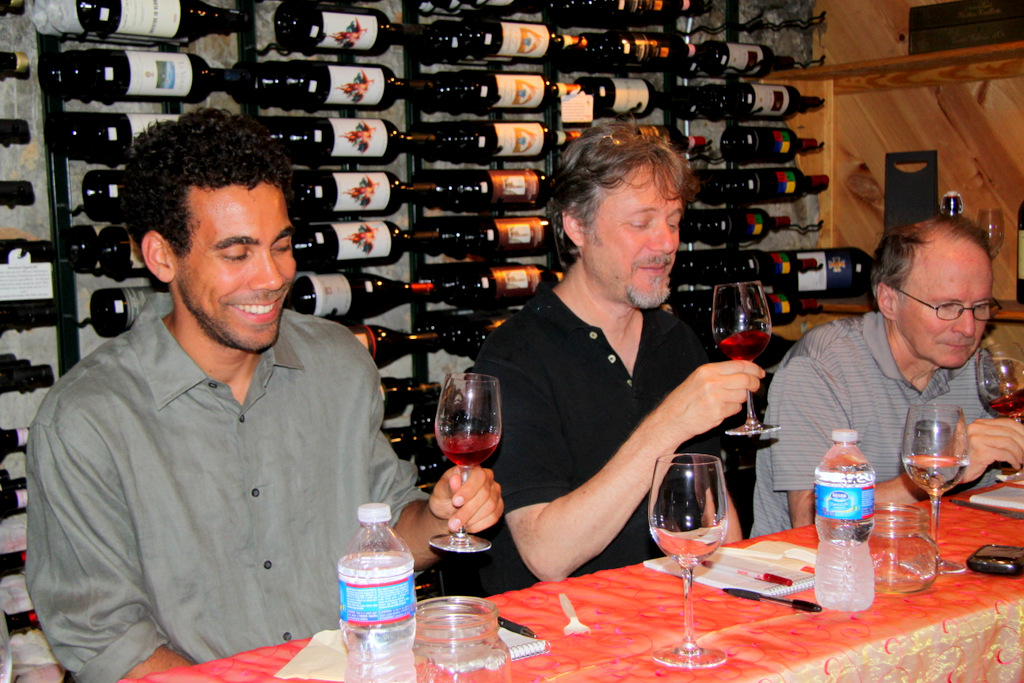 Joining me for the second installment of The Brew Decants were some opinionated Baltimore oenophiles.

Summer Breeze in a Glass

Rosé makes a virtue of simplicity in many ways, including the matter of age – it’s meant to be quickly-made and consumed. Everything we drank was 2011.

In Provence, the grapes are harvested in August or September, then washed and crushed just enough to pop the skins. After only a few hours, the wine is strained and drained into a fermentation tank. (The length of time determines the color and the strength of the tannins, usually leaving just a blush.)

The wine is then fermented and aged for a couple of months. Some rosés are bottled from a single batch, while others are blended. 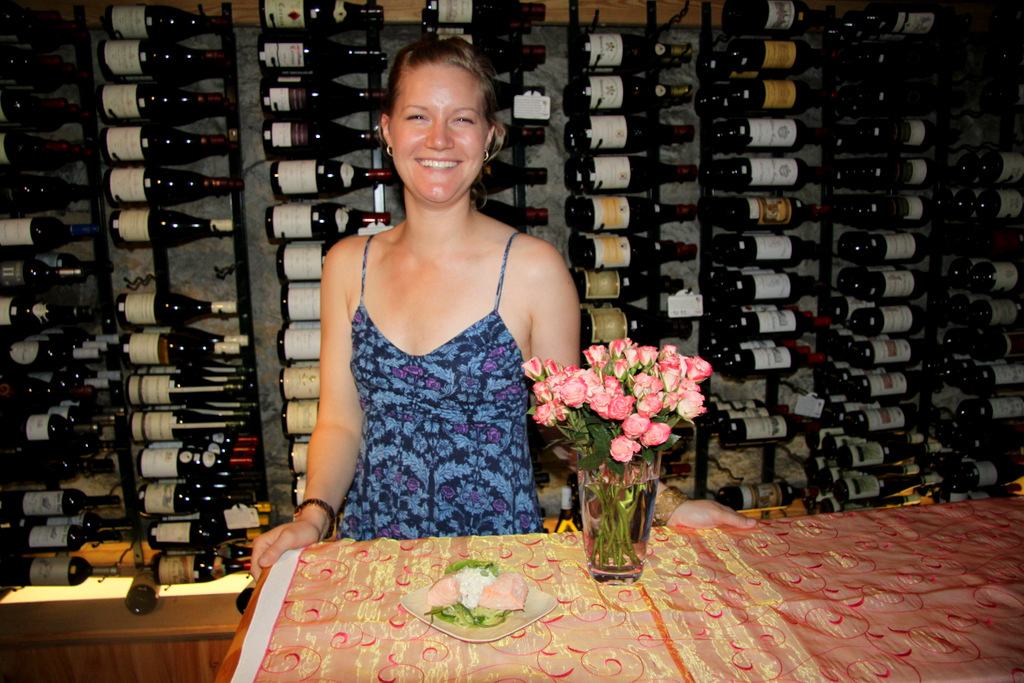 Ready for her rosé: The Brew’s Meredith Mitchell with pink roses and Classic’s pink salmon. (Photo by Fern Shen)

The color ranges from a pale melon to a deep pomegranate and the mouth-feel can be flat or frizzante (a natural light fizz that some wines produce).

In some instances it feels like soda. If it doesn’t have the cool relaxing taste in your mouth of a summer breeze – it is lacking something.

This easy-on-the-palate, fast-to-make wine is said to have been drunk on the Mediterranean and Adriatic coasts for millennia.

The classic French rosés are crisp and faintly mineral on the tongue with a slightly berry aroma.

Most of them have a somewhat short finish, which, if you like the taste leads to a second pour. At its best, rosé will have a lively mouth-feel with some satisfying undertones.

We sampled bottles ranging in price from $9.99 to $21.99 from France, Spain, South Africa, Argentina and the United States. Using our 1 to 4 scale and tasting “blind,” (i.e., the wines’ labels were hidden inside brown paper bags) our panelists came up with some clear winners.

This crisp, floral rosé (a blend of grenache, syrah, cinsault and rolle) is produced in the Massif de Maures, an elevated portion of Provence that extends to the Mediterranean and is thought to be the birthplace of all French vineyards.

After several mediocre bottles, Michael found this one “very classy” and Zach concurred, guessing it could be expensive.

“It’s got a slightly floral aroma,” Michael said. “The frizzante tingle is pleasing in the mouth.”

I liked the complex amber/pink color: “It looks and tastes like my image of a rosé,” I said. “It smells like gardens and cut grass.” 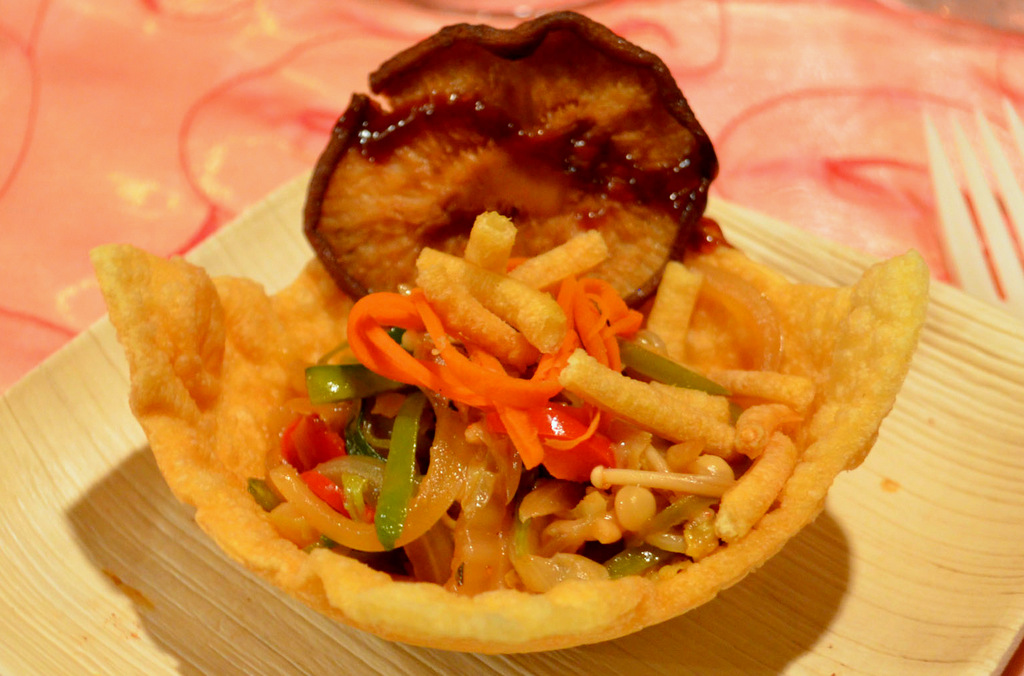 Thai Vegetable-mushrooom Stir-fry was a crunchy counterpoint to one of the more floral-scented rosés. (Photo by Francine Halvorsen)

Ricky liked the “bright aroma” and “pleasant bite,” observing “it’s on the dry side in a way that I like.”

This wine is drinkable on its own with simple snacks, but will, I think, also hold up to strong dishes such as a French bouillabaisse or Maryland crab chowders and hearty soups.

For us, it paired nicely with the earthy Thai-spiced shiitake mushroom stir-fry served up by Chef Bryan Davis of The Classic Catering People.

We were strongly divided on this blend of garnacha (60%), virua (30%) and tempranillo (10%). “Like a slow drumbeat with no crescendo,” Zach said. (We were trying work a music metaphor!) “I don’t appreciate the acidity or the tang.”

Michael disagreed: ” I think it’s more interesting than that. There’s a nice hint of sweetness over the light, dry undertones.” 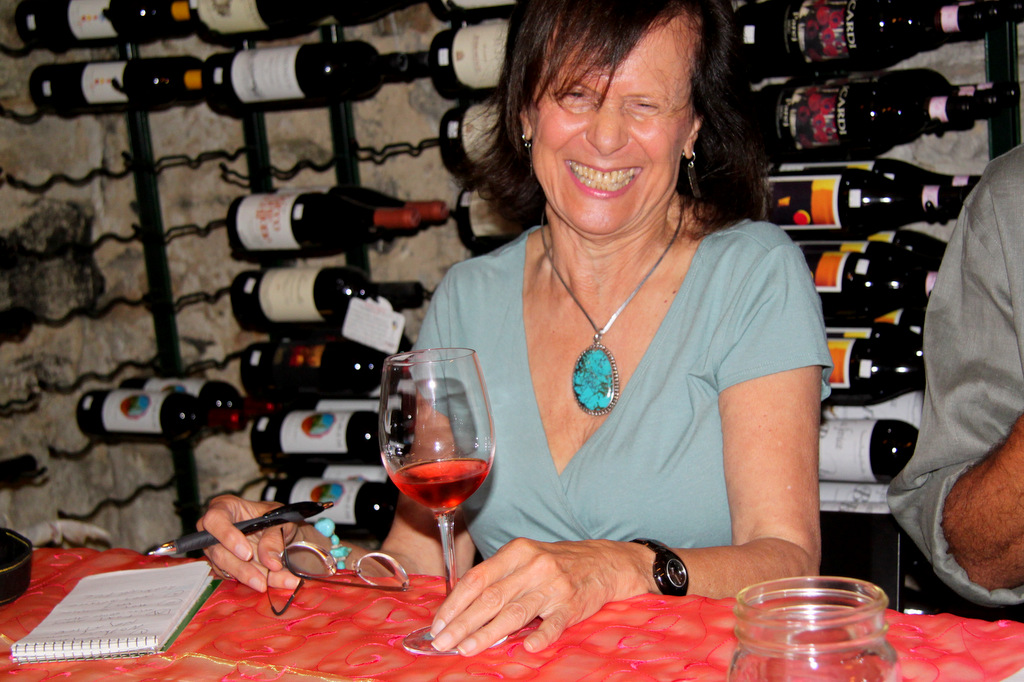 Great food and (pretty good) wine? The Brew’s Francine Halvorsen was fine with it. (Photo by Fern Shen)

It is the ubiquitous granache grape, which thrives in Southern Spain and France, that gives this wine its memorable strong fruit and berry flavor, and the white viura grape that delivers the tart undertone.

The deep color is achieved by macerating the grape skins for 12 hours. It is fermented for three to four weeks and then poured into wooden vats where it develops for two months before being bottled.

Tapas anyone? actually, the sparkling sequence of flavors in the Chicken Firecracker Rolls, including  sesame seeds and aromatic hoisin sauce, made this Spanish Asian fusion pairing an inspired choice.

This 100% cabernet sauvignon was pleasing to most, including me (“the mouth-feel of a ripe wild strawberry”), but Michael was underwhelmed (“Just not interesting”). 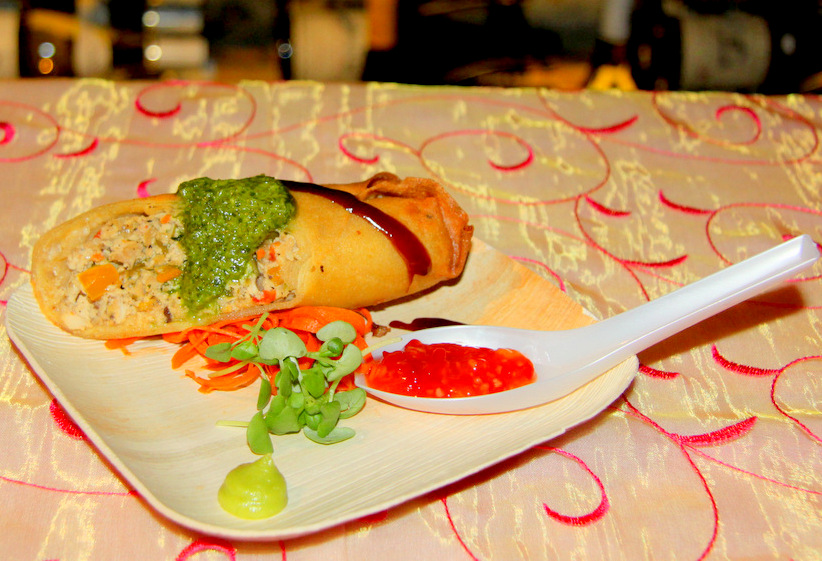 Located in the Stellenbosch Woods about 30 miles east of Capetown, Mulderbosch was established in 1989, and is committed to biodiversity.

It is not surprising that this was a winner in our group. (Mulderbosch’s great-for-the-price whites are legendary.) To make the rosé, they crush and filter the cabernet grapes, then add the wild yeast to enhance the complexity in a short fermentation time.

After fermentation, any yeast residue is filtered out so that its effect remains subtle. We would recommend it with the delicious butter-poached salmon we had or something similar.

Crios Rosé of Malbec, Mendoza, Argentina ($9.99)
This 100% malbec was a crowd-pleaser from the beginning. I tasted pomegranate, Ricky detected “a plum-like flavor with a  slight spice aftertaste” and those who came in professing some skepticism about the whole rosé concept found this one to have the proper pedigree. 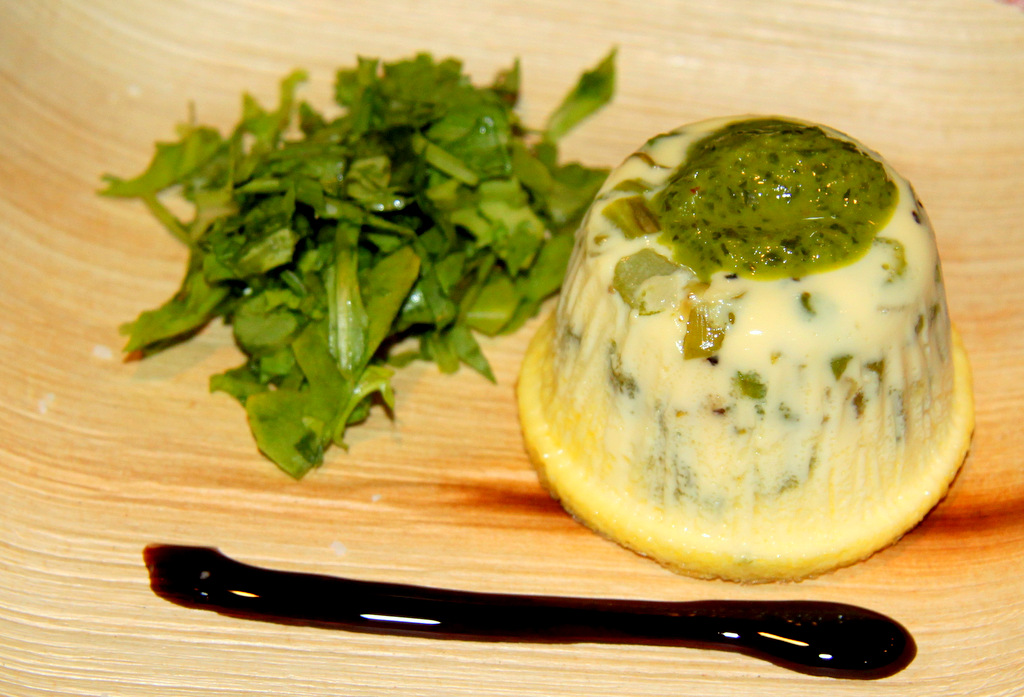 “It’s a rosé for folks who like reds,” Zach remarked. Michael pronounced it “tasty and straightforward, with the good breeding of a cabernet.”

Susana Balbo, the Crios vintner, is the first woman winemaker in South America, and since she earned her oenology degree in 1981, she has been determined to make excellent and memorable wines using bio-sustainable systems.

At the family vineyards in Lujan de Cuyo in Mendoza, the grapes are hand -picked, crushed and then fermented at 56-57 ° – the temperature the wine is best served at. Jose Balbo has taken over the production of the Crios Rosé and has maintained the unadulterated malbec grape taste. 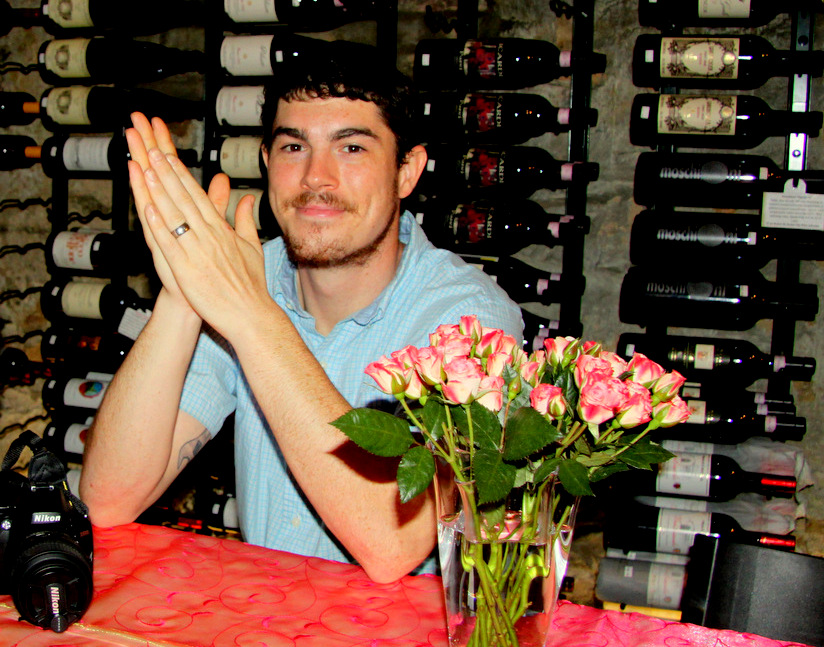