In the end she won by virtue of her 3-2 grip on Board of Estimates’ votes, but Mayor Stephanie Rawlngs-Blake took quite a battering yesterday from the normally reserved city comptroller, Joan M. Pratt.

At issue was a $7.4 million contract to IBM for an upgrade of the city’s phone system to VOIP (Voice-Over Internet Protocol). The contract had been competitively bid and was up for approval under a submission by a unit of Pratt’s office known as the Municipal Telephone Exchange (MTE).

Pratt said the contract was fully vetted by an independent city panel and was in the best interests of the citizens.

The mayor disagreed. Her proxy, Robert Minor, acting head of the Mayor’s Office of Information Technology (MOIT), told the board that VOIP and related upgrades would best be handled by the mayor’s people.

So there it stood – MOIT against MTE – with City Council President Bernard C. “Jack” Young sandwiched between a glaring Pratt and a rigidly composed Rawlings-Blake behind the spending board’s brightly polished dais. 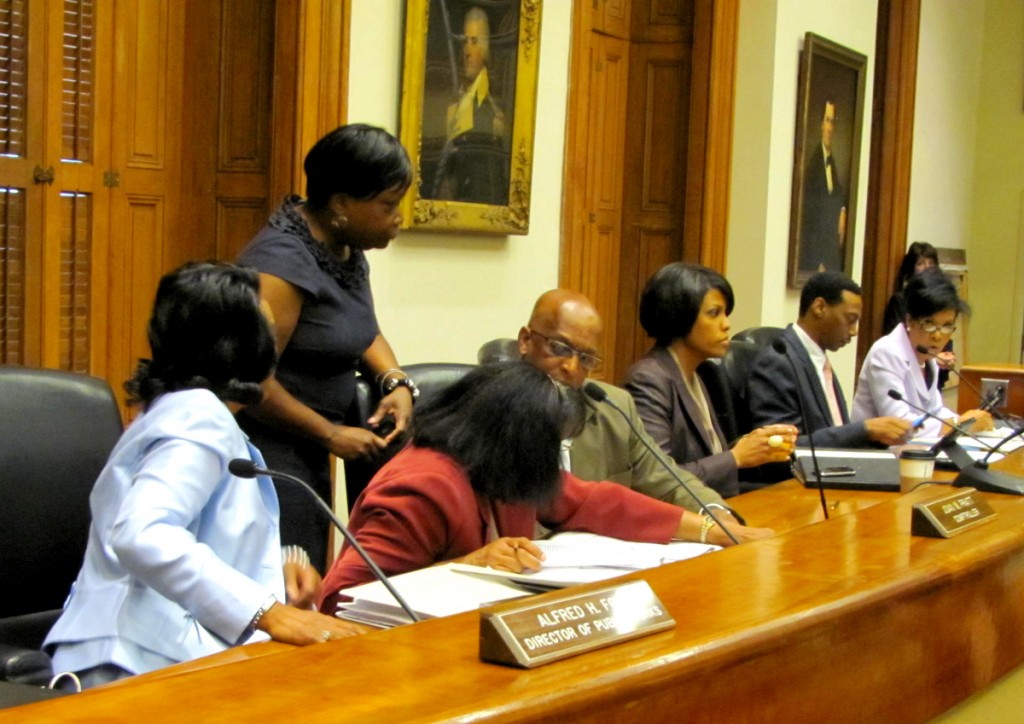 As Pratt and Young confer with their aides, Rawlings-Blake cradles a cup before the vote on the IBM contract. (Mark Reutter)

While the outcome of the vote was a given – even with Young voting with Pratt, Rawlings-Blake had an automatic majority, and the IBM award was rejected – the drama was compelling.

Pratt used the public forum of blazing TV lights to take pokes at the mayor.

She characterized MOIT’s installation of new video camera phones at City Hall as “a clear case of fraud, waste and abuse in city government” and, lest anyone wonder how she really feels, added, “The taxpayers should be outraged and in an uproar.”

For her part, Rawlings-Blake followed the dictum in politics that if you are responding, you are losing. 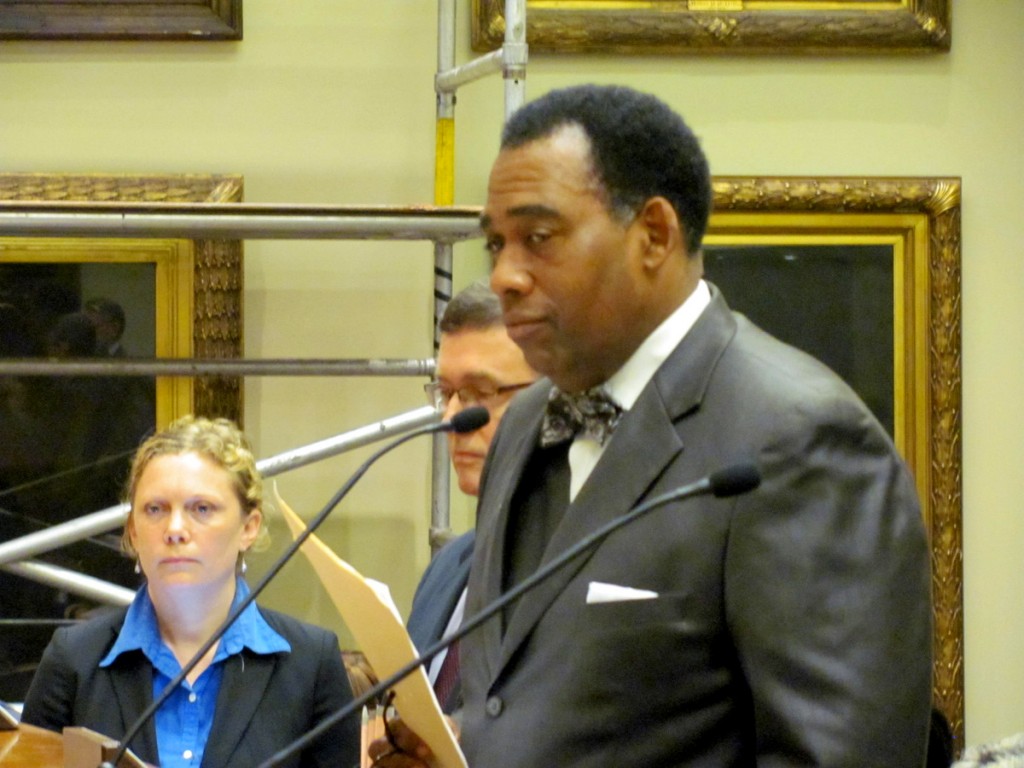 Robert Minor speaks before the board as Erin Sher of the Law Department listens intently. (Mark Reutter)

Looking away from the comptroller, the mayor said tersely, “I will make my concerns known when I respond to the motion.”

Tasked with the job of dissing Pratt and her staff was an awkward-appearing Minor.

He said MTE “cannot be successful” without the help of MOIT and then didn’t respond to some of Pratt’s questions under orders from Deputy City Solicitor David Ralph, who noted that the camera phone installations are under review by the inspector general.

Pratt and her top technology aide, Simon Etta, countered that MOIT’s work was amateurish, as witnessed by the video camera installations (which Pratt said cost $659,000 and the mayor’s office said amounted to no more than $55,000).

Adding another wrinkle to this story was the Cisco angle, namely Pratt’s belief that the mayor and MOIT have favored Cisco equipment through extensions of an existing contract with Digicon Corp., a Cisco-authorized provider.

Digicon was recently awarded a $2 million extension to a contract to provide consultants to MOIT, including a program manager who bills the city over $189,000 a year, according to information supplied by Pratt’s office.

The mayor did not respond to Pratt’s charges in detail.

Instead, she said “the truth” was that there have been no violations by her office of city procurement laws, and her intention all along was to make sure that the city wisely spent its money and chose the best telecommunications upgrades.

She also confessed that she was weary of being “the subject of media attention and misinformation” regarding the Cisco video camera phones installed in her office suite.

Both officials insisted that their approach will save the taxpayers money – and the other side will squander it.

The bottom line was that the telecommunication upgrades may be slowed in the near run, but not halted by yesterday’s rejection of the IBM contract.

For sure, Pratt’s office won’t have money to do the upgrades. But the mayor’s office will be able to move forward through the extended contracts with Digicon and another outfit called Telecommunication Systems, Inc.

What’s more, the Board of Estimates yesterday approved $2 million for “Consulting and Technical Services II” with a pool of vendors that includes Digicon but not IBM. MOIT appears to have the upper hand in gleaning those funds.

As for the future of relations between the city’s No. 1 and No. 3 elected officials, that’s hard to say. Pratt said the mayor hasn’t spoken to her in over a month.