Last night Carl Stokes, chairman of the City Council’s taxation and finance committee, placed the cost of the tax break proposed for the Superblock retail and apartment project on Baltimore’s Westside at $48 million.

His estimate, first reported in The Maryland Daily Record, is nearly three times more than the estimate given by the Baltimore Development Corp. (BDC), which is championing the project on the city-owned block anchored by Howard and Lexington streets.

The BDC has said that, based on current assessments, the 20-year tax break would be worth $17.6 million.

This estimate followed an article in The Brew that placed the Superblock tax break at $35 million. Prior to the Brew article, the BDC had said it could not reliably estimate the tax loss from the PILOT, or payment in lieu of taxes, it had proposed for the developer, Lexington Square Partners.

The tax break would make the Superblock project the second highest beneficiary of the city’s controversial PILOT program.

The largest PILOT break was given to a development group headed by bakery magnate John Paterakis to build the Baltimore Marriott Waterfront Hotel.

That PILOT, approved in 1997 by then-Mayor Kurt Schmoke, reduced property taxes on the 752-room Marriott to $1 a year for 25 years.

This has resulted in a reduction of $61.5 million in property tax revenues over the life of the PILOT.

Like other city hotels, Marriott does pay parking, hotel, energy and other taxes to the city, which totaled $3.5 million in 2011.

M.J. “Jay” Brodie, ongoing president of the BDC, said that tax breaks were the only way the Superblock project can get underway.

If the break was not offered, the $150 million project would not be built, Brodie has argued, and the city would not receive any tax revenues from the properties, which are currently owned by the city in anticipation of redevelopment.

The developer did not request a PILOT tax break until early this year, or five years after it won exclusive rights from the city to build on the site.

In addition to the proposed PILOT, Superblock is eligible for Enterprise Zone (EZ) tax credits from the state.

The credits would entitle project developers Lexington Square Partners to a 50% property tax reduction for five years – and potentially save the group another $6-7 million.

The Westside project has been stalled for nearly a decade as the city purchased all of the buildings bounded by Lexington, Howard and Fayette streets and Park Avenue and evicted the tenants. 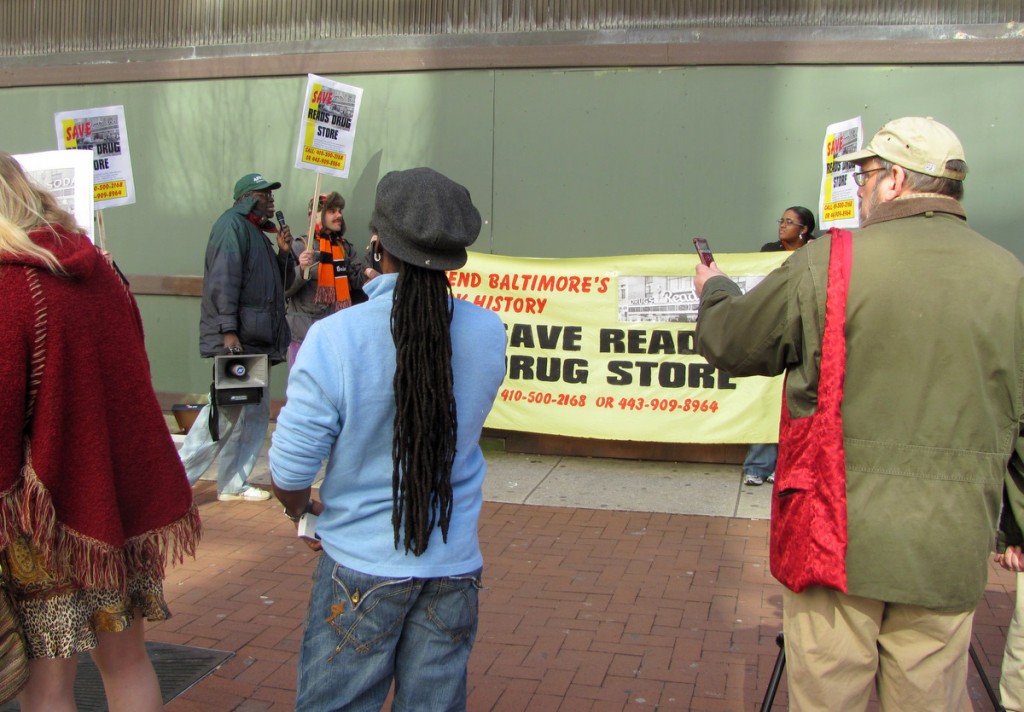 Protesters call for the preservation of the former Read’s Drug Store on Superblock last February. The developer has pledged to retain the building’s outer facade. (Photo by Mark Reutter)

Lexington Square Partners, headed by the Chera, Feil, Goodman and Nakash families of New York and the Dawson Group of Atlanta, have been given four extensions by the Rawlings-Blake administration to get the project underway.

The group entered an exclusive land disposition agreement with the city in January 2007, but the project has been beset by legal challenges and community protests over the preservation of historic buildings and the proposed commemoration of a pioneering civil rights sit-in at the former Read’s Drug Store.

The Rawlings-Blake administration has rejected suggestions that the property be opened up to other developers, and has insisted that Lexington Square’s “big-box” retail development – with an apartment tower and possible hotel – is the best use of the Superblock site.

At a hearing before Stokes’ committee last night, Harry Dawson Jr. pledged to hire local residents once construction gets underway in 2013.

He said his company is drafting an agreement for hiring minorities with Associated Black Charities, the Maryland Minority Contractors Association and other groups.

While Stokes has expressed misgivings over PILOT tax breaks, it is likely that the City Council will approve the Superblock PILOT.

The City Council has never vetoed a PILOT advanced by the mayor’s office.

Currently, there are 13 PILOTs in place for commercial building projects, nearly all of them located on or near the Inner Harbor, and the majority directed at new construction by the Paterakis development group

These include PILOTs for the Legg Mason Office Tower at 100 International Drive, Spinnaker Bay Apartments at 707 President St. and Laureate Office Building at 650 South Exeter St., all in Paterakis’ Harbor East enclave.