At issue is about $169 million of “enterprise zone” tax breaks over a 10-year period if the project is completed as planned by Baltimore’s biggest developer.

The “EZ” tax credit is not to be confused with other tax breaks awarded to the Paterakis group, such as PILOTs (payments in lieu of taxes) for the Marriott Waterfront Hotel and Legg Mason Tower and a TIF (tax increment financing) for banking giant Morgan Stanley’s Thames Street offices.

For example, the Paterakis group has already secured a $155 million TIF to subsidize infrastructure building at Harbor Point, where 2.97 million square feet of office, retail and residential development is planned.

EZ is a separate state program that lops off 80% of a developer’s property tax bill for five years (with diminishing reductions over the following five years), but comes with a catch – the development must be in a low-income, high-unemployment community.

Eligibility requires either a rate of unemployment at least 150% of the state average, poverty levels at least 1.25 times the state or national average, 70% of residents with under 80% of median family income, or a loss of population accompanied by “chronic abandonment or demolition of property.”

The Harbor Point zone has none of these requirements. 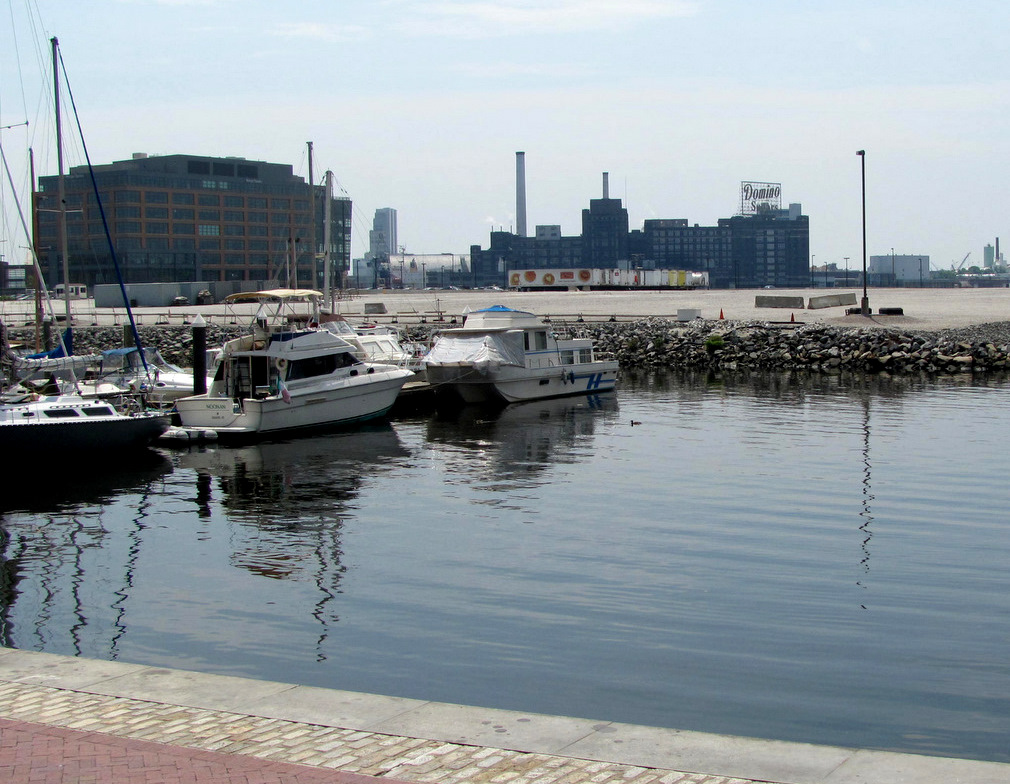 Harbor Point, seen behind sailboats and cruisers moored at Harbor East, is a 27-acre site where Paterakis proposes to build a $1.3 billion commercial and residential community. The brown building at the far left – completed by the Paterakis group for Morgan Stanley in 2010 – secured an EZ tax break.  (Photo by Mark Reutter)

Instead, the site is located in one of the most affluent, growing districts of Baltimore.

Sandwiched between Harbor East and Fells Point, the 27-acre site is surrounded by luxury condominiums, rehabbed historic rowhouses and upscale restaurants and retail stores that have attracted residents with median annual incomes of $62,185 – nearly twice Baltimore’s average – and unemployment under a third of the city’s average, according to U.S. Census Community Survey data used to establish an EZ zone.

The site was designated an EZ zone back in 2002 when it was a former factory undergoing environmental remediation. During the mandated 10-year review of EZ zones this year, Harbor Point was removed by the Baltimore Development Corp. (BDC).

That was in April. On July 10, Gov. Martin O’Malley approved the new EZ map, replacing the expired 2002 map.

Now three weeks later, the BDC has set in motion an “expansion application” process that not only proposes to restore Harbor Point’s EZ status, but to expand the designation to include other Paterakis-owned property along the Thames Street waterfront and the east side of Central Avenue south of Eastern Avenue.

The BDC plans to submit the expansion application to the City Council this month after holding a public meeting on the application next Wednesday (see location of meeting below).

“High Poverty Rates” Near the Site

Already, the Paterakis group has geared up with a 10-page letter justifying its tax-break status as essential to move the $1.3 billion project forward. 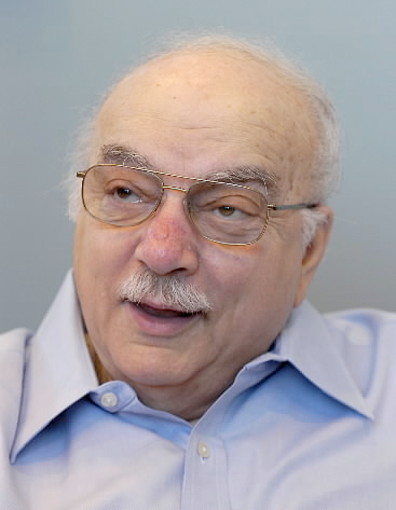 “The history of the past two decades strongly suggests that the economic formula [the EZ zone and other tax breaks for Harbor East] has been working,” the letter says.

“Now is not the time to upend that formula by removing Enterprise Zone status from the site.”

The application letter strongly suggests that construction will not proceed without the tax break, even though the Paterakis group signed an agreement to complete a 350-foot-high office tower for energy giant Exelon by 2014.

In its application, the Paterakis group argues that Harbor Point would improve “the area immediately north of Harbor East,” which it characterizes as having “high poverty rates, elevated joblessness and ongoing lack of investment momentum.”

The application does not further identify the impoverished zone. The community “immediately north” of Harbor East is Little Italy, a thriving neighborhood of well-kept rowhomes, restaurants and condos. Neither does the document provide any census tract or demographic data that typically under-girds EZ zone designations.

Instead, the Paterakis groups lauds its success in championing “an already established dynamic waterfront neighborhood” by luring global banker Morgan Stanley to the Thames Street Wharf in 2010 – “a success for the city, for the state and for the enterprise zone program.”

The ultimate build-out of Harbor Point will produce 7,040 construction jobs and will “support $1,642.2 million in sales of goods and services by city businesses when multiplier effects are fully considered,” the application said.

These and other economic impacts come from a study that the developer commissioned from the Sage Policy Group, a Baltimore firm that has done economic impact studies for East Baltimore Development Inc., General Growth Properties and the Maryland Stadium Authority.

Estimating the Tax Benefits for Paterakis

There are no estimates of the value of proposed EZ tax breaks for the developer.

M.J. “Jay” Brodie, president of the BDC, did not respond to a request for information by The Brew earlier this week. Marco E. Greenberg, vice president for development of Paterakis’ Harbor East Development Group, said in an email, “We are still pulling together all the information that we will present at next week’s hearing, including the answers to your questions. I would be happy to provide more details at that time.”

The application says that the Harbor Point project will ultimately cost $1.3 billion. Discounting $150 million of that cost covered by the TIF tax break, the value of the property should be approximately $1.15 billion. At the current tax rate, Paterakis would pay $26 million in annual property taxes.

But with an 80% credit on the tax bill, the developer would save $20.8 million in taxes a year – or $104 million over the first five years. After the fifth year, the tax discount is reduced in 10% annual increments until it reaches 30% in the tenth and final year.

These savings would help Paterakis reduce the amount of TIF tax financing on the project, which would in turn reduce his financing costs. So far, the developer has not applied for the PILOT tax credits that subsidized the Legg Mason Tower, Marriott Waterfront Hotel and other properties constructed at Harbor East.

The Paterakis proposal to extend the EZ zone to its Thames Street/Jackson Wharf property in Fells Point (2 acres) and Central Avenue property (2.4 acres) would result in an estimated $600 million in additional private development, according to the application letter.

Using the city’s current tax rate, the tax credits for these improvements would amount to $54 million for the first five years and $27 million in the final five years – for a total of $81 million over the life of the EZ credit. 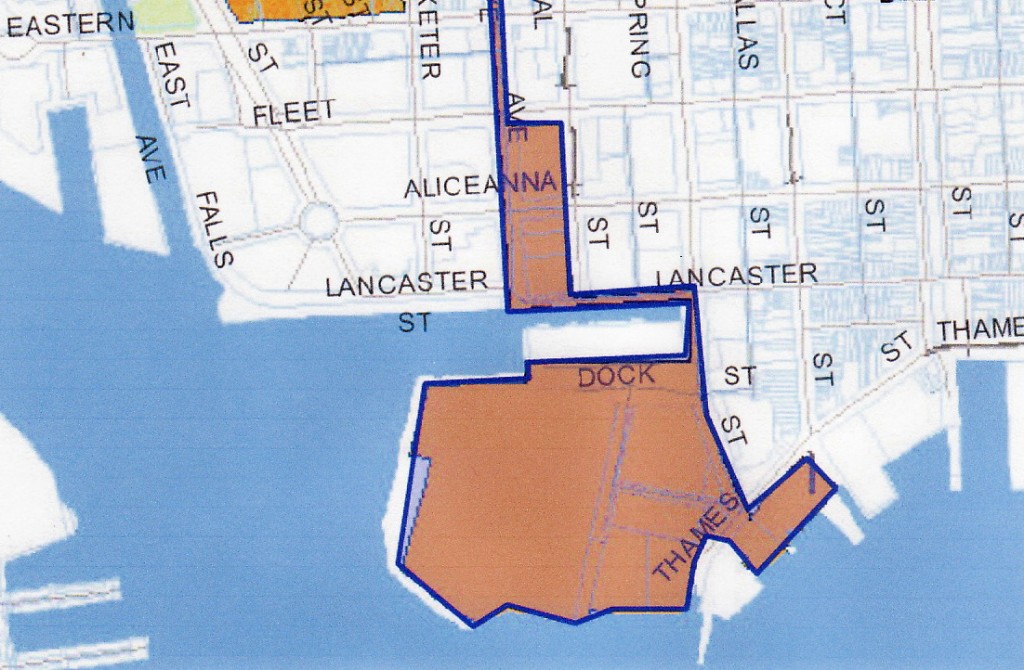 In addition to the Harbor Point peninsula, Paterakis seeks an EZ designation for property he owns along the Thames Street waterfront in Fells Point and land between Lancaster St. and Eastern Ave. owned by his H&S Bakery group. (Harbor East Development Group)

Unlike the PILOT and TIF programs, where the city bears the full cost of the tax savings in lost general funds, the EZ tax program splits the net reduction of property taxes between the city and state.

In other words, the city is reimbursed for 50% of the amount of the tax savings accrued to the developer.

Because of the high level of state reimbursement and because the EZ zones are primarily located in low-income Baltimore, Gov. O’Malley called on the city to decrease the amount of land eligible for tax benefits in the latest redrawing of the tax map.

That resulted in the shrinking of the city’s enterprise zone from 22,000 acres to 13,500 acres by removing large areas of south, west and east Baltimore from the map.

The tax credit is only available for commercial businesses and developers in an enterprise zone. A business is eligible for the 80% tax savings if it makes a capital investment (new construction or renovation) or hires at least one new employee.
_______________________________________
The BDC has scheduled a public hearing next Wednesday (August 8) at 6:30 p.m. at Johns Hopkins Eastern, 1101 East 33rd Street, 3rd floor, on the proposed EZ zone expansion for Harbor Point and for the Alameda Shopping Center in northeast Baltimore.