Lest a cynic suggest that this week’s Maryland Association of Counties 2012 Summer Convention at Ocean City, where 1,800 elected and appointed officials congregate, is simply a schmoozing, boozing, deal-cutting gabfest by the sea – consider the hard work undertaken at the workshops by some of Baltimore’s finest.

Yesterday, Rochelle “Rikki” Spector, the septuagenarian Councilwoman who has represented her northwest district for 35 years, agreed to moderate a panel on how the Internet makes for more transparent government.

Spector, who occasionally responds to emails, was tasked, according to MACoCon’s agenda, to channel discussion on “how trends in web functionality and expectations are changing how citizens receive information and demand interactions with their governments, and how governments can best equip themselves to capture their citizens’ attention.”

Tomorrow, Councilwoman Helen Holton of West Baltimore’s 8th will weigh in on “County Collaboration on School Board Budgets,” a subject we heretofore did not know she was intimate with.

In addition to the Councilwomen, Mayor Stephanie Rawlings-Blake and key members of her staff are attending the meeting, which kicked off on Wednesday with a golf tournament that lasted from 7:30 a.m. to 4 p.m. 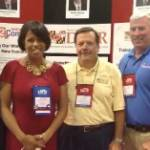 “Thanks for coming to our booth,” says this tweet of Mayor Rawlings-Blake posing with employees of the Maryland Department of Labor, Licensing and Regulation yesterday.

Other highlights of the four-day retreat at the Roland Powell Convention Center – a keynote speech by “world-renowned solo yacht racer” Neal Petersen, a reception featuring Broadway show tunes, and plenty of food and drink.

The latter comes courtesy of the convention’s sponsors and exhibitors.