The five-page agreement will leave 1,600 unionized workers at Sparrows Point – and another 2,400 workers in Ohio and West Virginia – without health benefits, SUB (supplemental unemployment benefits), insurance or an active pension plan.

Nearly all of the workers have been laid off since RG Steel filed for bankruptcy protection in May and suspended production at Sparrows Point in June.

Last week, the Steelworkers lost all rights to represent employees for the new owners of Sparrows Point at a bankruptcy court hearing.

McCall, who has handled all contract matters with present owner RG Steel, has been criticized for not keeping workers informed of the bankruptcy proceedings.

As recently as 10 days ago, McCall suggested to his inner circle that steelworkers would be paid SUB and health benefits for the next six months and “everything would work out fine,” informed sources told The Brew. Earlier, McCall implied that Sparrows Point would return to active steel production following the sale of its assets.

The agreement signed by McCall on Thursday is set to be presented this week to U.S. Bankruptcy Judge Kevin Carey, who will almost certainly sign the order.

The agreement calls on SUB and pension payments to be terminated August 10, while health benefits will continue to August 31.

After August 31, a very small contingent of workers – approximately 100, according to the document – will assist RG Steel in “asset protection” of the Sparrows Point and Warren mills in anticipation of the sale of the properties to liquidating and redevelopment firms.

In this AFL-CIO video clip from a Labor Day 2011 event, Dave McCall speaks about the importance of unions to prevent “some of the greed and the exploitation that some employers live by every day.”

RG Steel expects to wind up its affairs and dissolve as a company after the closing date of the sales, now expected in mid-to-late September.

Buyers Have No Obligations to Union

As The Brew disclosed last week, the new Sparrows Point buyers – liquidator Hilco Industrial and brownfield re-developer Environmental Liability Transfer Inc. – are free from obligations to the USW and are not required to hire anyone from the current Sparrows Point workforce. 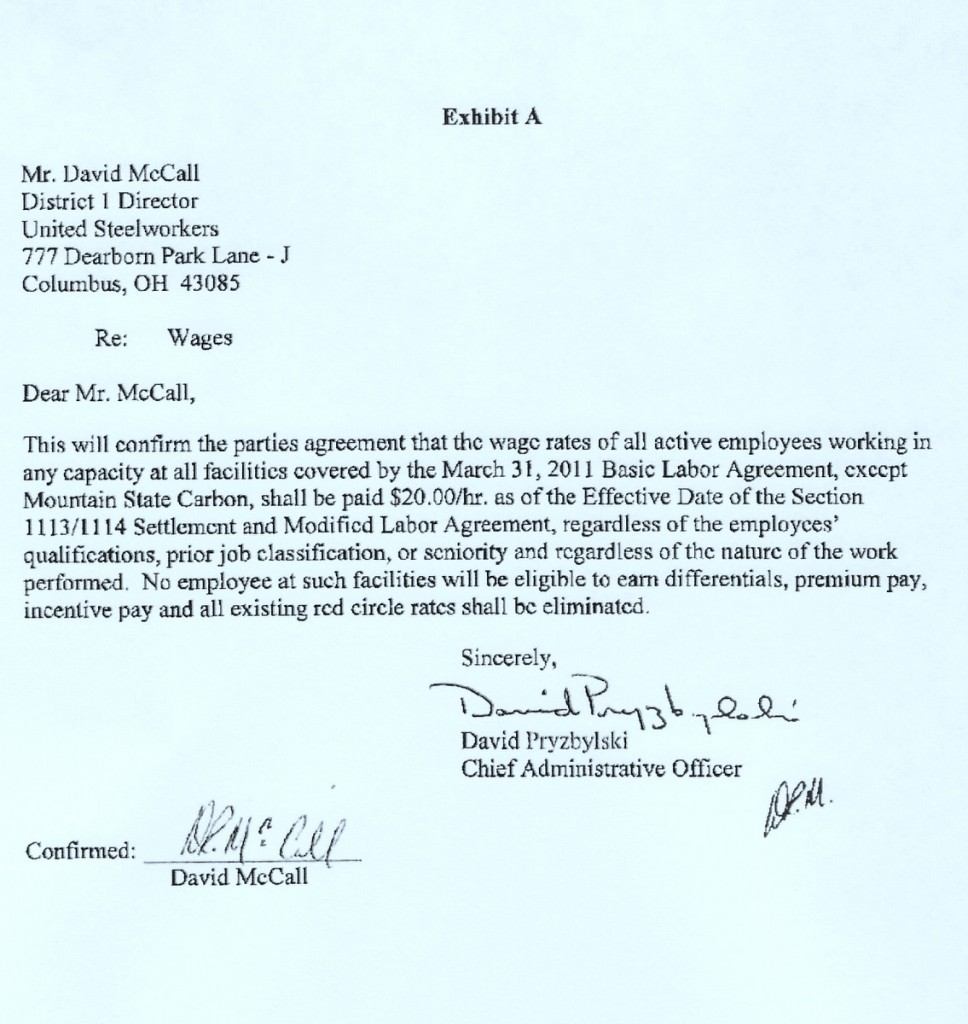 Dave McCall signed off on this supplemental agreement that sets the new wage at Sparrows Point at $20 an hour with no benefits or premiums. (Downloaded from U.S. Bankruptcy Court in Wilmington)

Hilco-ELT are expected to bring their their own workforce to the 2,400-acre property.

After a period of environmental remediation, the group is expected to scrap most or all of the mill and sell parcels to investors and perhaps the state of Maryland.

Sparrows Point’s deep-water port has also been eyed by the MPA in anticipation of larger ships docking in Baltimore following the widening of the Panama Canal.

While termination of the current labor agreement was expected, Local 9477 USW officials were led to believe that the termination would not be reached until this week.

Rumor also had it that SUB pay would continue at least through August 15, the date that Judge Carey approved the sale to the Hilco-ELT group.

Instead, an agreement was signed by McCall and RG Steel’s David Pryzbylski on Thursday – and filed after the close of business on Friday at the U.S. Bankruptcy Court in Wilmington.

Modification of a labor agreement is allowed under Section 1113 of the U.S. Bankruptcy Code. This can happen either through a ruling by the bankruptcy judge or through voluntary settlement talks between the company and union. A final option is for the union to litigate against any proposed change in the contract.

• All active and retiree benefit programs, including medical coverage, accidental death and dismemberment insurance, and prescription drug care, shall be terminated on August 31, 2012.

• RG Steel will deposit $6.5 million from the sale of its properties into an escrow account for the purpose of paying medical and prescription drug claims incurred on or before the August 31 termination date.

• RG Steel will deposit $210,000 to address unsettled arbitration awards and other employment claims, and thereafter is released from such claims.

• The workers assisting RG Steel in asset protection will be paid $20-an-hour, with none of the cherished incentive and differential pay that have been hallmarks of USW labor agreements for the last 50 years.

• RG Steel agrees that the “successorship clause” of their 2011  labor contract “shall continue for one year from the effective date of the MLA (Modified Labor Agreement).”

The successorship clause gives the USW the right to negotiate a contract with a company that wants to restart steel operations.

But since the Hilco-ELT group has been released from all obligations to the USW – and has expressed only lukewarm interest in trying to reactivate Sparrows Point as an ongoing operation – it is unlikely that the successorship clause will result in the return of a unionized workforce.

The USW has represented employees at Sparrows Point since 1941, when its predecessor, the Steel Workers’ Organizing Committee (SWOC), won a government-supervised election following a bitter struggle with owner Bethlehem Steel Corp.