Talk about putting your eggs in one basket.

Of the $2.9 million requested from the Maryland Department of Housing and Community Development, the Baltimore Development Corp. asked that $2 million go for improvements on the 600 and 700 blocks of South Broadway in Fells Point.

BDC board member Deborah Hunt Devan repeatedly questioned the request, saying it appeared to be a large amount of money to spend on curbs, streets and gutters along two blocks.

“Streetscape is expensive,” acting BDC executive director Kimberly A. Clark replied, at yesterday’s monthly board meeting. She said the work would include installing new utilities, granite curbs, cobblestone paving and other amenities.

The BDC is currently involved in funding improvements on the 800 block of Broadway at Broadway Square. The city park overlooks Thames Street and its various tourist destinations, stylish restaurants and Water Taxi boat service.

Earlier this year, the BDC transferred $269,000 of East Baltimore Construction Reserve Funds for design work to enhance Broadway Square. The city’s Board of Estimates approved the allocation because it would “complement” improvements on the 600 block of South Broadway.

BDC board member Armentha Cruise wondered how the staff determined what neighborhoods were eligible for state grant money? “So many communities might have a need. What determines” the criteria, she asked.

Cruise was told by BDC staffer Nick Rudolph that a committee composed of city staffers “reaches out to a grid of sustainable communities” to determine their needs.

The Sustainable Communities program was established by the Maryland General Assembly to provide government funds to leverage private capital and is tied to the Community Legacy and Baltimore Main Streets initiatives. 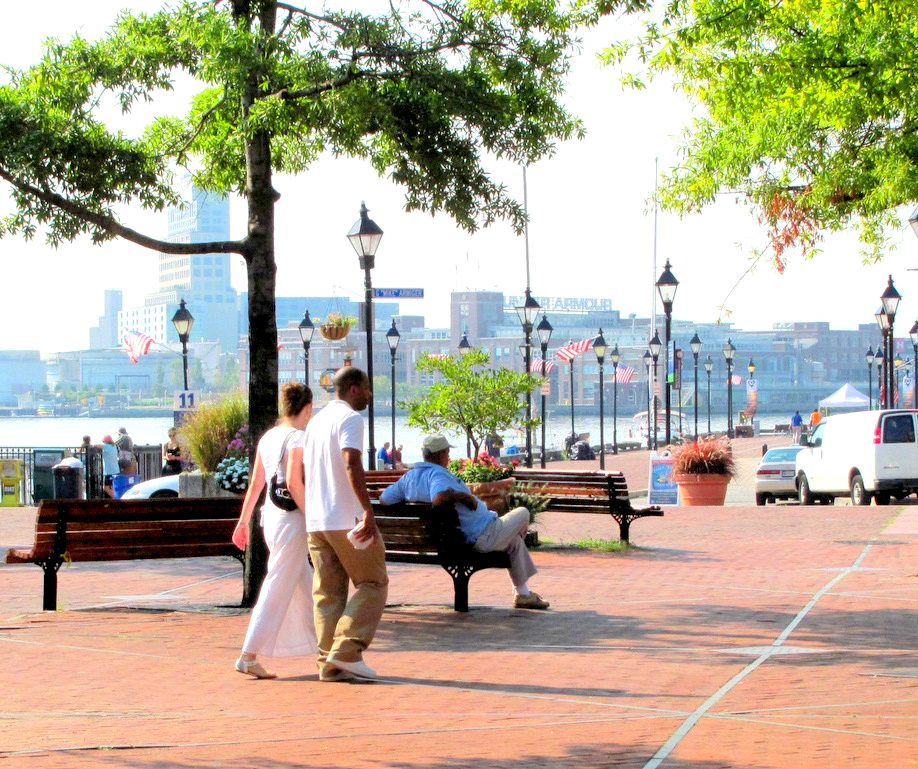 A couple crosses Broadway Square yesterday, with Thames Street and the Locust Point waterfront in the background. (Photo by Mark Reutter)

The program calls for funds to be allocated “to revitalize a declining area” and provide money for new storefront facades, streetscape improvements and business retention.

The 600 block of South Broadway is undergoing a $24 million private project to convert the 19th-century rowhouses into 159 apartments and ground-level retail shops.

At the same time, the city is renovating the public market located in the middle of the block.

Under the state grant application, nine of the communities (the Pennsylvania Avenue corridor was excluded) would be eligible to share $150,000 in building facade improvements, $450,000 for streetscape improvements and $100,000 for parking-lot improvements.

In addition, the agency requested $50,000 for a solar roof on a former fire station in Lauraville-Hamilton and $150,000 for three design charrettes in Highlandltown.

Rudolph told the board that the grant application was a wish list, “knowing that we won’t get the full ask.” The city’s request is nearly half of the $6 million available statewide in fiscal 2013.