The word “new” was announced, shouted and chanted at the First Day Celebration and Ribbon Cutting Ceremony at the Leith Walk Elementary School yesterday.

Students were unveiling a new addition to their 61-year-old elementary school building in northeast Baltimore, completed in time for the opening day of the new school year.

“The brrrand newww building” is “like Christmas, Easter and spring vacation rolled into one!” said Kabir Ishamail, a fifth grader, welcoming parents, students and dignitaries to the ceremony.

Intended to house grades 2-5, the structure has modern classrooms, with smart boards and wirelesss data networks, as well as a media center with computer stations and a gymnasium. The new building, connected to the existing structure, is part of the conversion of the school to serve pre-K through eighth grade, beginning in 2014.

“There is even a little stage in the library,” exclaimed fifth grader Amber Peoples, pointing to a cozy, raised carpeted area in the well-lit media center, dedicated to reading.

But the star attraction was something the guests could only feel – cold air on a warm August day.

Built in 1961, Leith Walk’s aging air conditioning units, boiler and windows have been, by all accounts, never up to the challenge of keeping children cool in hot weather and warm in the winter.

“We used to send the kids to school with water bottles we froze the night before,” said Kristyn Hockaday, a Leith Walk parent with a kindergartner, 2nd grader and 4th grader in the school system.

Having grown up in the local Loch Raven neighborhood, Hockaday remembers the poor conditions of the school back when she attended with her brothers.

“It felt like 100 degrees in class” back then, she recalled. 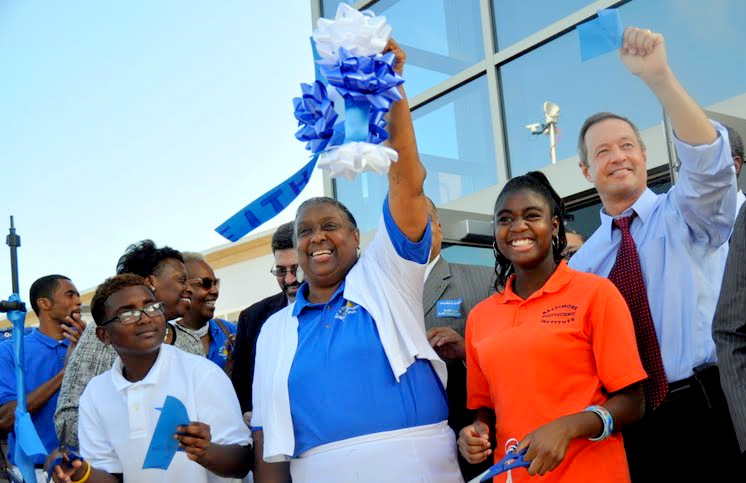 The extreme temperatures and poor facilities were what inspired Principal Edna Greer to take action.

“My dream began when I saw my students try to concentrate when, outside, it was 90 degrees, and inside the east side of the building it was 100 degrees,” Greer said.

With the support of the Leith Walk community, she competed against other schools in Baltimore to receive state funds. In total, they have received $20.3 million from the state. According to Mayor Stephanie Rawlings-Blake, it is “largest single school funding every approved by the state.”

After the speeches, Greer led the students in call-and-response style chanting: “When I say Leith Walk, you say NEW SCHOOL. Leith Walk! NEW SCHOOL!” Then came the ribbon-cutting and soon students were filing in the new doors, one of them held by 5th grader Kaylah Robinson.

“When I first heard about the new building,” she said, “I was thinking about how big the school was going to be and how it wouldn’t be as hot.”

The dignitaries gathered yesterday described Leith Walk as just the beginning of larger plans to renovate and rebuild across the city’s network of dilapidated school facilities. The school’s new addition is “one small step,” Del. Curtis Anderson said, preceding “a giant leap.”

But not all the small steps, even at Leith Walk, have been taken. Next, the original 1951 Leith Walk building, which currently houses pre-kindergarten through 1st grade students, must be renovated.

I got new shoes, a new shirt and a new skirt,” said kindergartner Jayla Salters, who seemed to naturally join in the celebration of all that is new. So, when will Jayla and the other younger kids get their newly improved school?

This spending is a fraction of the $2.5 billion said to be needed to renovate all of Baltimore’s public schools.

School construction advocates were on hand to make this point, as well as applaud the shiny new building on Sherwood Avenue and the funding expected to be generated for school repairs by casino revenue and the mayor’s bottle tax.

But these current strategies only generate “a small trickle of money” compared to what’s needed, said Bebe Verdery, director of the Education Reform Project of the ACLU of Maryland and a leader of the Transform Baltimore coalition. The needs were described in detail in the June “Jacobs report,” commissioned by city schools.

“The vast majority of city schools buildings pre-date the color TV and man on the moon – 23% were built prior to 1946 and 74% were built between 1946 and 1985,” according to a city schools summary of the report, which conclud4es 50 of the 182 are in such poor condition they should be replaced or considered surplus. 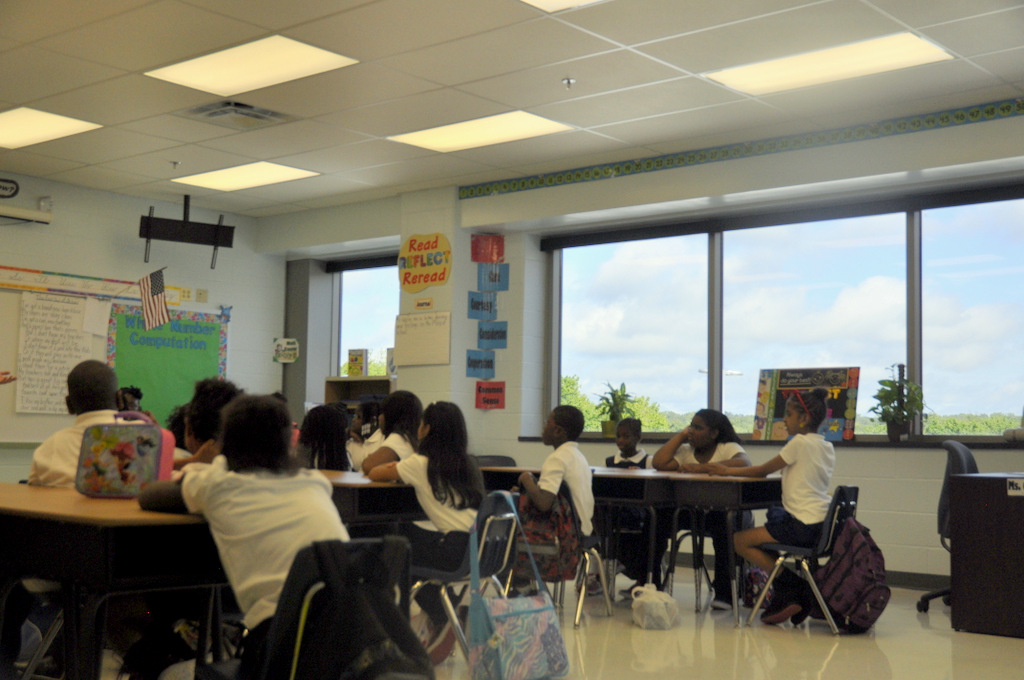 One of the new classrooms at Leith Walk Elementary School. (Photo by Laura Flynn)

In October, the school system is expected to release a 10-year plan to address the problem but it won’t work without a new approach to funding, Verdery said.

“The $60 million or so in school construction money spent in Baltimore now goes primarily for band-aids on old buildings- a new roof on one building, a set of windows at another, etc.” she said. “Only 1 building gets renovated every year or two.”

Transform’s approach would allow the same sum of money to be used in an installment purchase arrangement so that a large sum can be borrowed up-front, all the buildings renovated or built, then the debt paid off over time.