Sometimes what appears to be happening isn’t what’s really going on. Especially in the convoluted world of preservation versus development in the city of Baltimore.

For example, today’s decision by the Commission for Historical and Architectural Preservation (CHAP) to deny Howard Brown the right to demolish the Morris A. Mechanic Theatre for an apartment-retail complex would appear to be a serious blow to the Owings Mills developer.

What really scared Brown at today’s hearing, according to his attorney, Stanley Fine, would be tabling the motion to deny the demolition permit by CHAP or – still worse – removing the Brutalist-style building from commission’s “special list” of historic properties.

The former would subject Brown to another month of ruminations by CHAP over the fate of the vacant building, while the latter could subject his plans to a lawsuit alleging that CHAP acted illegally by withdrawing the special list status.

So while Brown ideally wanted approval for immediate demolition today, CHAP’s denial of a permit will trigger a six-month interlude in which the agency’s power over the Mechanic will end in March 2013. 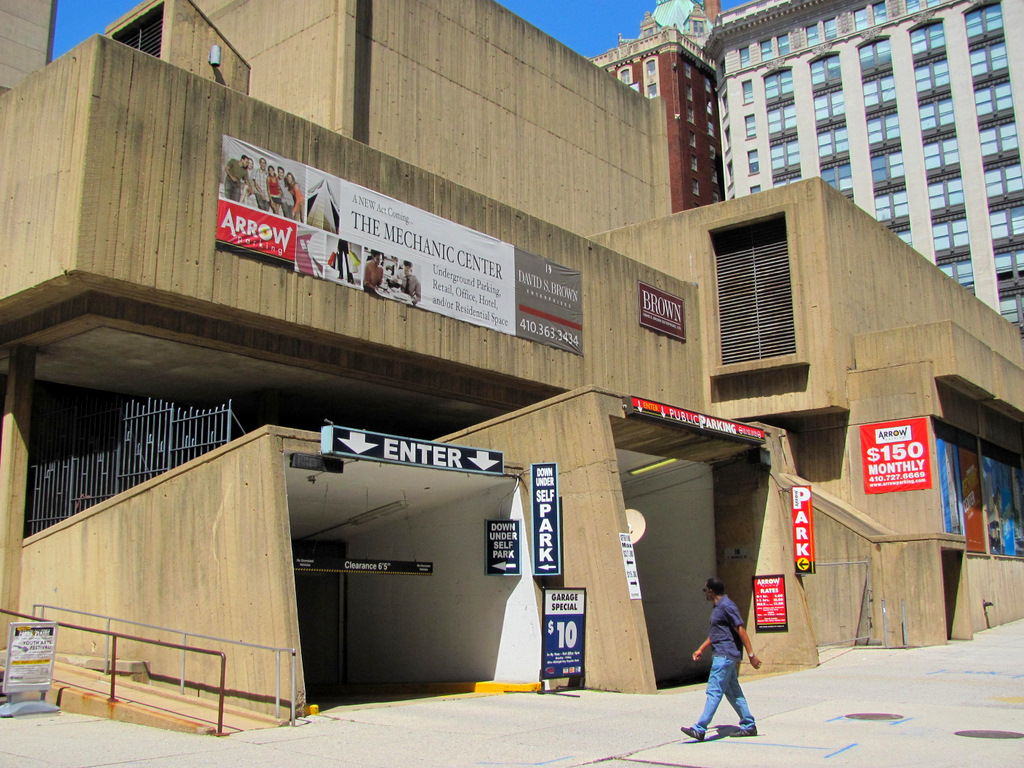 Morris Mechanic Theatre is destined to be torn down. What will replace it is still not clear. (Photo by Mark Reutter)

At that time, final say over demolition will fall to Paul Graziano, the housing commissioner.

While a month ago Brown was reportedly fuming to the mayor that CHAP and Kotarba were blocking his plans, Fine explained today that the developer has plenty to do before he’d even consider knocking down the building.

Among the tasks Brown faces: reaching an agreement with the Maryland Transit Administration that owns the Charles Center Metro stop beneath the theater, negotiating with adjoining property owners over a pedestrian tunnel and engineering a much bigger parking garage for the site.

“We told them they should allow us the demolition permit, but if they weren’t going to, deny the permit so the clock starts ticking,” Fine said.

It was the prospect of having no say in the Mechanic parcel that generated concern among some CHAP members.

Commissioner Larry Gibson worried that the Brown group might tear down the Mechanic before it had its replacement project in place, resulting in another unsightly gap in downtown Baltimore.

While Fine said his client was not required to make any commitments to CHAP, he added, “We have no intention to demolish the building for a surface lot.”

Longtime preservationist John C. Murphy told the commission that the city had many tools to encourage the developer to do the right thing. He cited city-administered tax breaks, such as PILOTs (payments in lieu of taxes), as carrots that could encourage a quick transition from a vacant lot to new construction.

What is required is a city administration that keeps the fire lit under the developer.

A topic never raised at today’s hearing was the practicality of Brown’s proposed development on a small parcel of downtown.

He wants to build two towers – with 600 apartment units – atop 100,000-square-feet of retail, and a five-level parking garage replacing the existing two-level garage.

That’s a lot of building for an area that has not been historically conducive to large-scale retail or especially attractive to permanent residents.

The proposed price tag of $200 million would be roughly equal in size and scope to the Westside Superblock.

The Superblock project, just a few blocks away on Fayette Street, has been stalled for a decade thanks to lawsuits and controversy over the developer’s efforts to tear down much of the site (since amended to keep the outer facades of Read’s Drug Store and several other historic buildings).

The city is tearing down the former Greyhound Bus Terminal on Fayette Street, creating a big hole that may be replaced by a parking garage and apartment tower if the Superblock development ever gets underway. (It’s currently on its fourth extension of a land disposition agreement with the city.)

CHAP and Director Kotarba have experienced the stress of being at odds with Mayor Rawlings-Blake, who has staked her tenure on the success of her pro-development “10,000 new families” policy.

Caught before in the cross hairs, CHAP today maneuvered itself away from another incendiary battle.