Anyone who has seen the Maryland Live! Casino at Arundel Mills would have been prepared for the monstrosity submitted  to the city’s Urban Design and Architectural Review Panel last week for the proposed Harrah’s Baltimore casino.

In suburbia, a 5,000-space garage that makes its attached 4,750-slot casino look like a mere sidelight is to be expected. Unfortunately, the city’s site between Russell Street’s “gasoline alley” and Middle Branch’s “no man’s land” has bred the same kind of design mentality, dominated by an almost as humongous 4,000-car garage.

The proposal by Caesars Entertainment makes even the largest of the existing downtown garages seem puny by comparison. The largest city-owned garage is “only” 1,105 spaces at Gay and Water Streets. And the garage for the First Mariner Arena is the second largest at a mere 888 spaces.

No wonder UDARP had to reject the casino and send its designers back to the drawing board.

The Middle Branch casino design is reminiscent of what happened 20 years ago at Camden Yards.

Nationally-famous stadium architectural firm HOK submitted a design proposal for Oriole Park that was a facsimile of their recently completed New Comiskey Park in Chicago, plopped down on the Camden Yards site as if it was any nondescript exurban corn field.

The rest is history. HOK redesigned Oriole Park to truly tailor it to the site, instigating the country’s downtown ballpark revolution.

Middle Branch in 2012 has very similar conditions to Camden Yards in the pre-ballpark 1980s.

Both sites were chosen because they are/were separated from potential disruptions. Camden Yards was not really urban yet. The B&O Warehouse was just a warehouse, and even more of the site was covered by a huge, 1960s-vintage food distribution facility.

Many lessons were learned in the planning of Oriole Park and its subsequent football neighbor, M&T Bank Stadium. Camden Yards taught us that isolation does not work, and that the biggest advantage of an urban setting is that it enables surrounding areas to work together. At Arundel Mills, there might have been no choice but to design what they did, but Middle Branch can do better.

1. Create an urban context. Originally, Camden Yards wasn’t really part of downtown. Downtown was extended there by integrating with existing buildings – Camden Station, the Ridgely Delight’s community and especially the magnificent B&O Warehouse – and infilling with the city’s Hilton Hotel, which may be ugly but fits in well.

2. Disperse and share the parking. Traffic flow actually works for Camden Yards because the parking facilities are cut down to size and everyone does not park in the same place. Patrons have options to avoid congestion.

3. Create an urban spine. Eutaw, Camden, Conway and Russell streets deftly fit into Camden Yards much better now than in the old days. Russell Street used to separate Ridgely’s Delight from the sprawling food warehouse situated at an odd angle.

Conway Street was able to become a powerful visual link between the B&O Warehouse as the westward focal point, and the Inner Harbor Aquarium to the east. A memorable pedestrian promenade was established between the baseball and football stadiums.

Applying the Rules to the Casino

Here is how these rules can be applied to the casino, so that an isolated monster parking garage will not be necessary and the valuable Middle Branch waterfront can be an asset and a focal point rather than just an afterthought.

1. Create an actual urban street linking downtown, Camden Yards, the Middle Branch and Westport. The pieces are already there. From Conway Street, the Oriole Park warehouse creates a wonderful 1,000-foot urban edge that could easily define a new street which could be extended southward to the roadway that already wraps around the football stadium, which can then be linked to the casino via Warner Street. 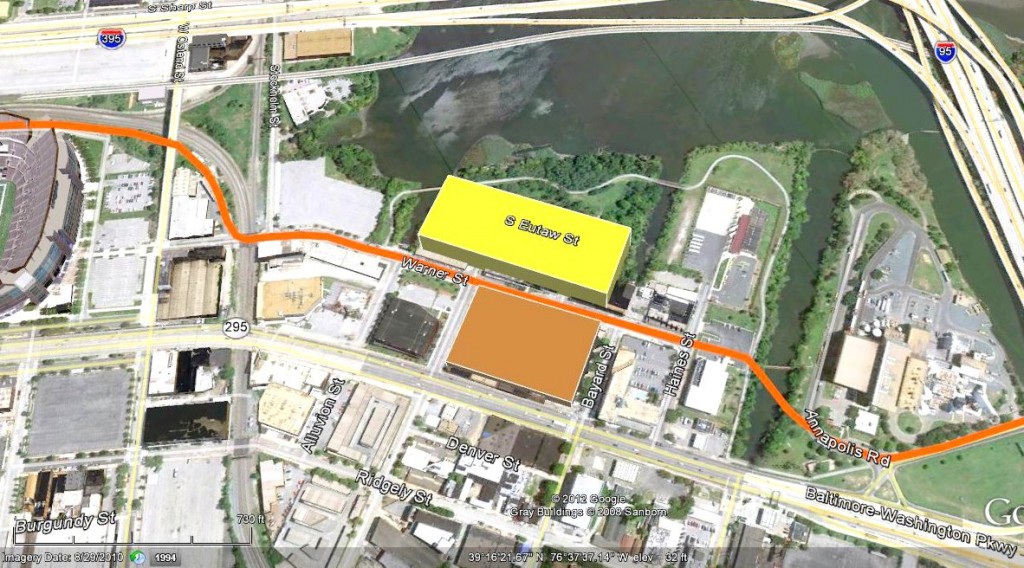 Warner could then be coupled with Annapolis Road into Westport. As a result, Camden Yards, Middle Branch and Westport would instantly be perceived as part of the same unified urban “Sports and Entertainment District.”

This would also be a great boon to the Westport community as well as the languishing Patrick Turner waterfront development, which have both suffered from isolation. And it would be a great place for a bikeway (perhaps the only affordable transportation after a casino trip), augmenting the current convoluted Gwynns Falls/Middle Branch bikeway.

2. Split up the casino’s proposed monster 4,000 car parking garage.  Yes, the casino needs primo parking for the high rollers, but 4,000 spaces is way too much. The new urban spine road would enable some of the parking demand to be shared with M&T Bank Stadium and other nearby locations.

3. Cancel the proposed permanent Greyhound Bus Terminal. The current bus terminal on a Middle Branch peninsula a block south of the casino site was intended to be temporary when the downtown terminal was displaced for Howard-Lexington “Superblock” project.

This is a terrible site for a bus hub and has very bad MTA access. But it could be a great site for something that shares parking with the casino. If the temporary bus terminal becomes permanent, it would signal that the city has given up on Middle Branch spin-off development despite decades of hype and promise.

4. Consider swapping the casino building on Russell with the parking garage on the Middle Branch. Russell Street is a honky-tonk, anything-goes highway strip with gas stations, Royal Farms (neither royal nor a farm, as mused Brew commenter Unellu), Public Storage and other miscellany. 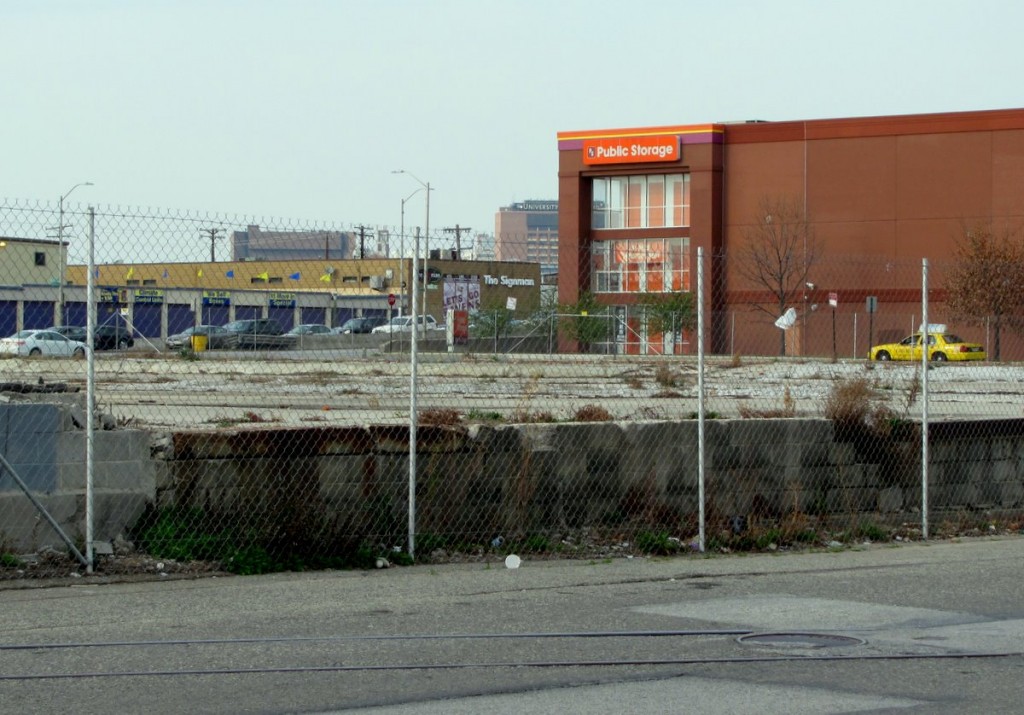 The Maryland Chemical Co. site on Warner Street – with Russell Street in the background – is a better place for a scaled-down parking garage. (Photo by Mark Reutter)

A parking garage on Russell Street would give the casino free reign to be as garish, grand, eye-catching, neon-drenched and out-of-place as it wants to be. Besides, where would most of the casino’s traffic be coming from anyway?

In contrast, Middle Branch adjacent to Warner Street would be a much better “urban face” for a formal casino entrance, sidewalk cafes and the like. This was originally intended as the casino site, and it remains a much better choice, while still providing maximum visibility and access on Russell Street.

5. Take advantage of gambling’s split personality to give the casino a classy image. The Middle Branch frontage is a blank slate that could reflect the “classier” images of a gambling casino. You know, with those impeccably dressed beautiful people shown socializing in the TV ads (as opposed to glassy-eyed grandma feeding slots in her PJs).

This is where the urban design panel showed they were most sensitive to what the casino looks like, visible from I-395 above and Baltimore’s iconic skyline views. And this is where the original idea of an Inner Harbor gambling palace comes in.

Yes, many people previously saw an Inner Harbor casino as repellent, but that was before a huge guitar was hung onto a Power Plant smokestack and a Chessie monster was wrapped around Harborplace. Now a casino could fit right in.

The Inner Harbor was originally centered on the crossroads of Pratt and Light Streets, but now extends many miles from Canton to Camden Yards to Fort McHenry.

Adept planning should allow the Inner Harbor  to be extended again to the Middle Branch so that the proposed casino can take rightful place in the Baltimore scene.