Tony Jobst measured his margin of safety by inches.

That’s how close the water came to flooding the Lost City Diner he’s been renovating at the corner of Charles and Lafayette.

The retired Baltimore policeman had enough street smarts to place a strip of wood, secured by bags of gravel, in front of the restaurant’s entrance. The makeshift barrier diverted water cartwheeling furiously down the sidewalk away from his building.

Or so he hopes – Jobst was waiting for the water to recede further before opening the door and examining the restaurant’s old pine flooring.

In general, merchants on the 1700 and 1800 blocks of North Charles Street survived today’s water main break – described as “extraordinary” in its force and volume by a city spokesman – with relatively minor damage. 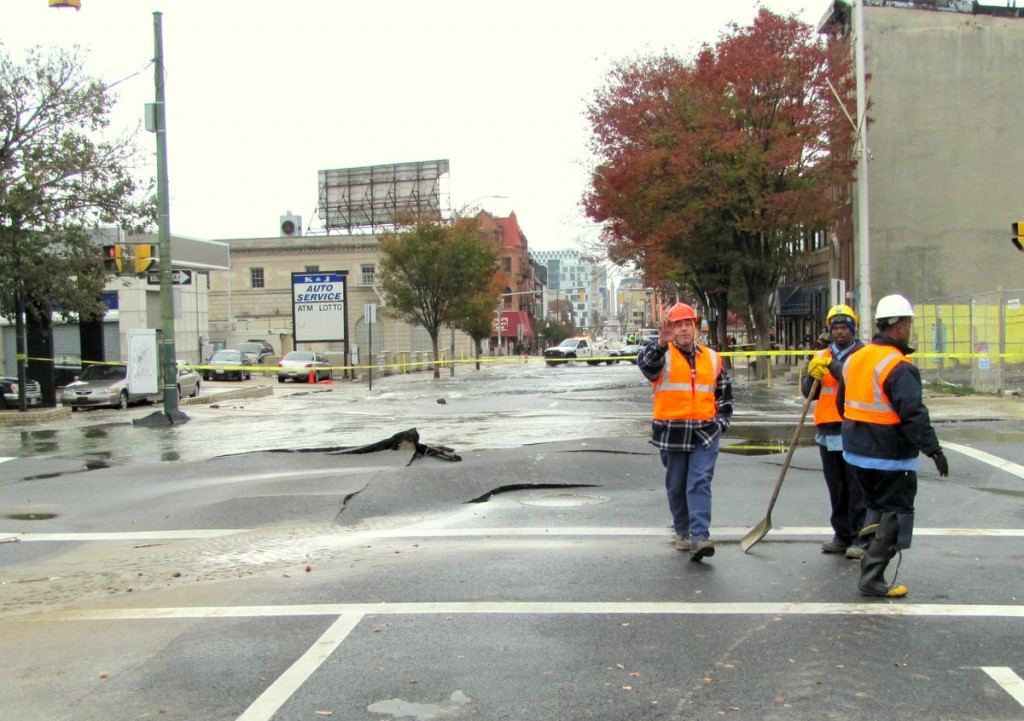 Ground zero: 20th and Charles with pavement buckled from the pressure of the water released by the broken transmission pipe. (Photo by Mark Reutter)

But the cost to the city is liable to be high. Repairing the break at 20th Street at Charles won’t be easy and is liable to keep Charles Street closed north of North Avenue for many weeks, according to officials at the scene.

Some water was still flowing down Charles Street this afternoon because a complete shutoff could cause the asphalt to crack around the broken pipe, affecting a nearby 20-inch BGE gas line and some electrical lines, said Kurt Kocher, spokesman for the Bureau of Water and Wastewater. 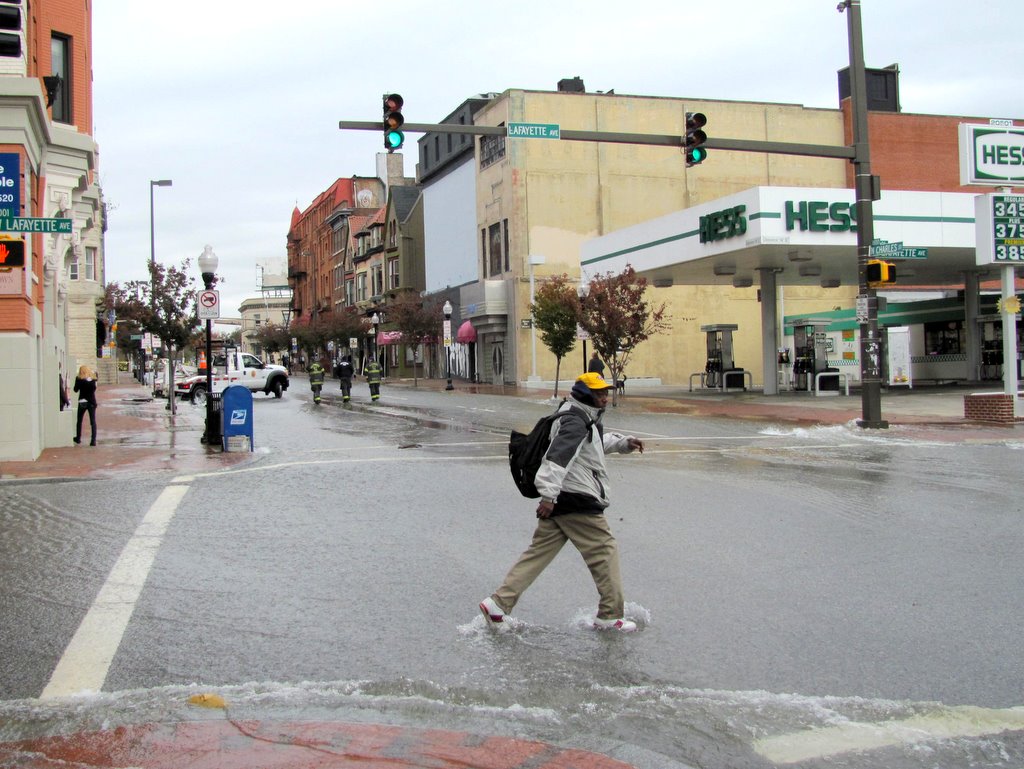 Kocher said the break occurred in a cast-iron pipe manufactured in 1913 and installed in the 1920s. “Basically we’re talking about a 100-year-old pipe,” he said.

The city has been replacing about five miles of old water mains a year – not enough to keep up with the advancing age of the system, Kocher added.

Close Call for BGE and Merchants

Rob Gould, a spokesman for BGE, said gas and electricity service to several customers was turned off today as a precautionary measure. “We’re working with the city to ensure everyone’s safety,” he said. “We may be able to reroute some customers temporarily until the situation is resolved.” 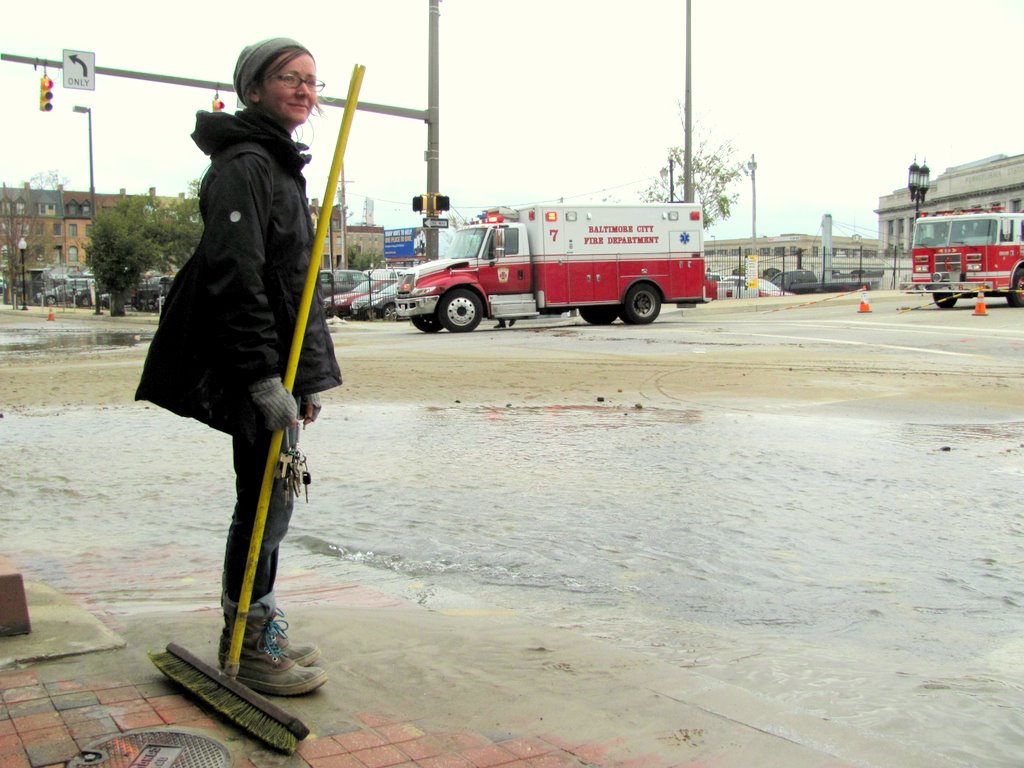 Clean Up: Marian Glebes takes a break from sweeping in front of the Metro Gallery at the intersection of Charles and Lanvale streets. (Photo by Mark Reutter)

Like the city, BGE has been concerned about the stability of the pavement at the breakage point, but “We’ve not had had any damage [to gas or electricity lines] as far as we know,” Gould said.

As a result of letting the water flow out of the broken pipe, two steady currents of water continued to course down Charles Street to Lanvale, where the water was emptying into city storm drains.

At the height of the break around 9 a.m., Charles Street was inundated with roiling currents that spilled over the embankment at Lanvale Street into Amtrak’s Penn Station yard and service road below. 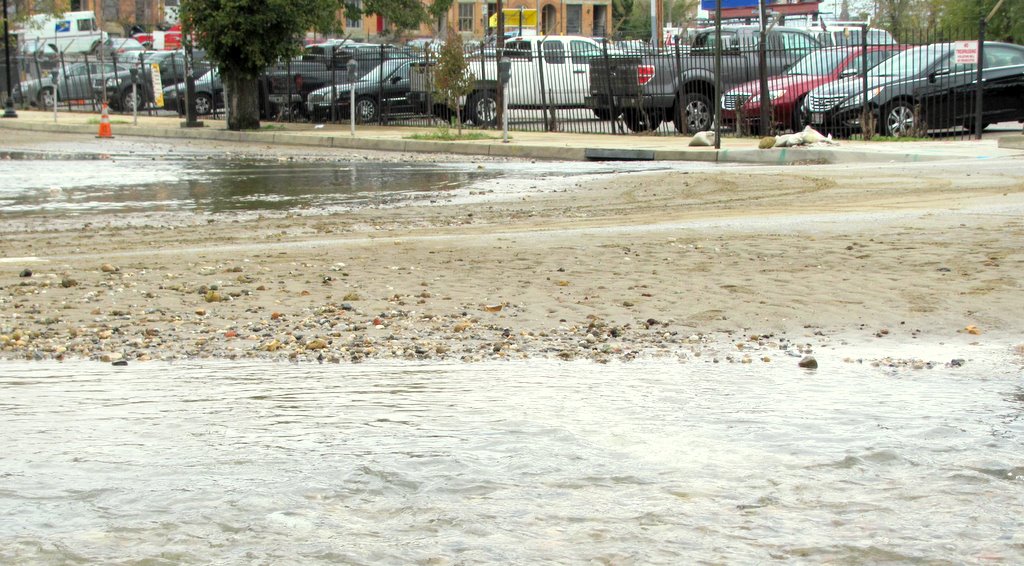 After the flood receded, Lanvale and Charles took on the look of a bedraggled seashore. (Photo by Mark Reutter)

As a precaution, Amtrak  took one track out of service this morning, but did not cancel train service. There were some delays reported to Northeast Corridor and MARC commuter service.

Guy and Sarah Werner, who own the Metro Gallery at the corner of Lanvale and Charles, were busy today mopping up several inches of water that seeped into the building.

“We got away better than some probably did,” Guy Werner said, noting that the building has no basement and he and his wife were able to remove sound equipment on the first floor to higher ground.

“The art wasn’t damaged, and we’re very happy about that,” he said, adding that the gallery still plans to host a punk rock event this Friday and Saturday nights “come hell or high water.” 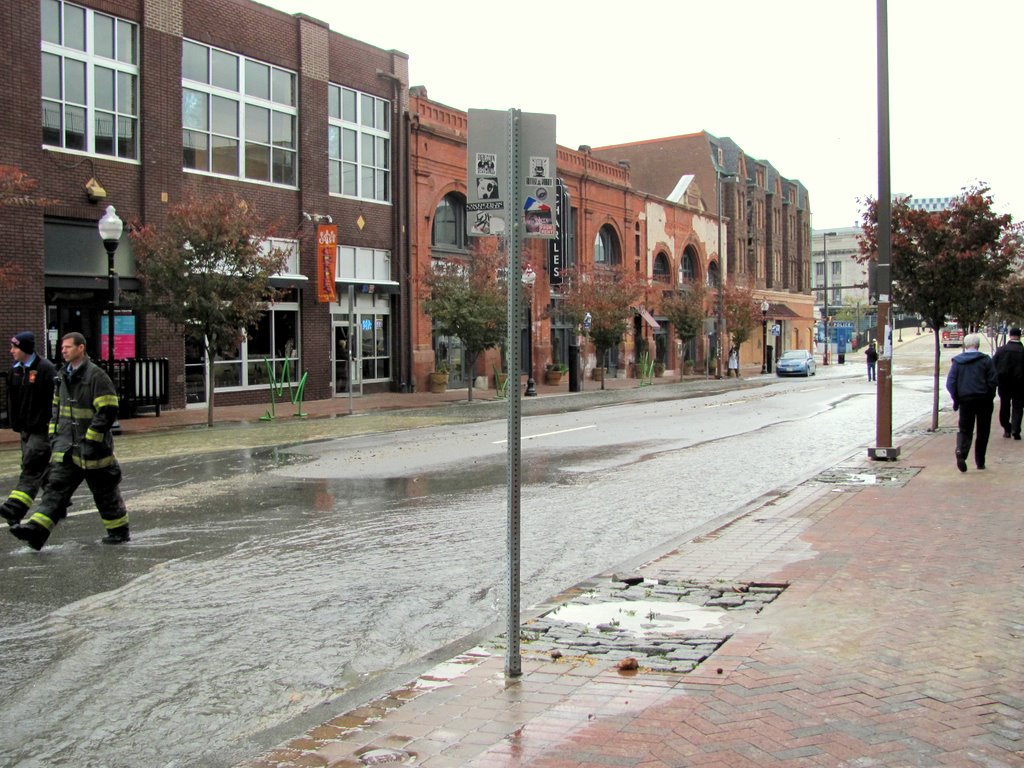 Across Charles Street, the water reached the foundation of the former Chesapeake House restaurant, which is under renovation, and reportedly flooded the basement.

Along the east side of Charles Street water lapped the sidewalk fronting Everyman’s Theatre, Sofi’s Crepes, Charles Theatre and Tapas Teatro Cafe. But it appeared that the main channel of “River Charles” was guided down the street bed by a new granite curb, which defended the buildings from the worst of the flow.

The same was true on the 1800 block of Charles where a cluster of nightclubs and eateries were spared heavy water damage, according to several merchants interviewed. 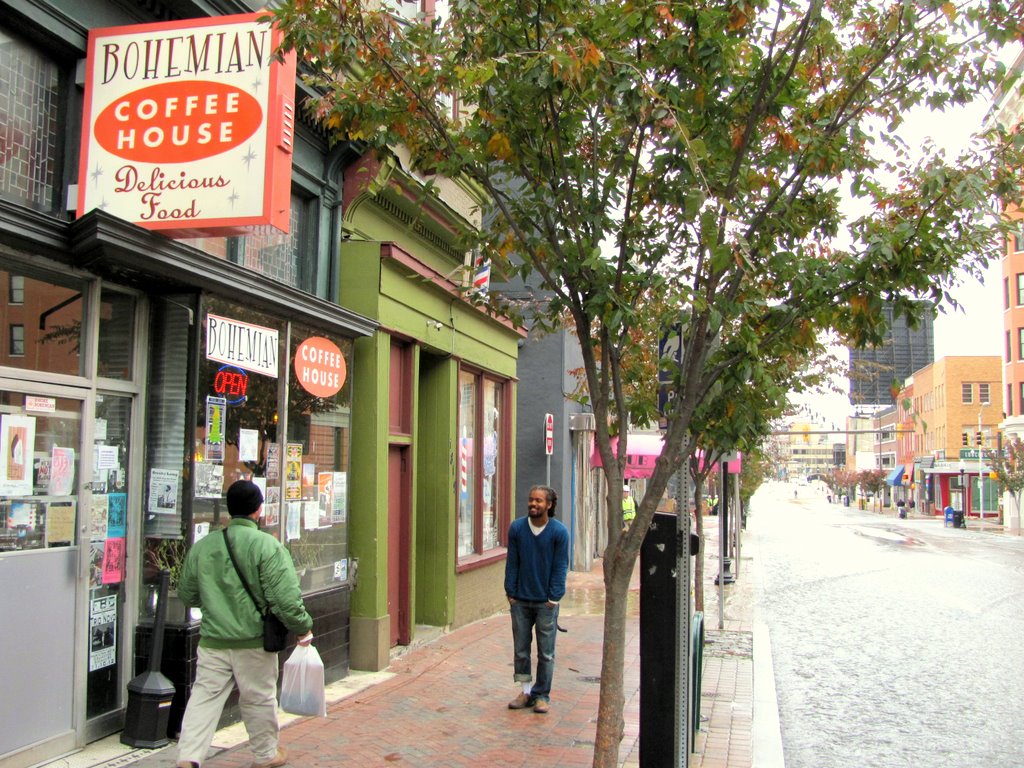 Going with the flow: Steven Carson (right), owner of Bohemian Cafe, on the 1800 block of North Charles today. (Photo by Mark Reutter)

Steven Carson, owner of the Bohemian Cafe, said he watched the water rise above the curb and then inch across the sidewalk before stopping at his door.

“I was lucky. It was like going through another Sandy experience,” he said, recalling last week’s tropical storm that dumped 6 inches of rain on the city, but otherwise caused no major damage. 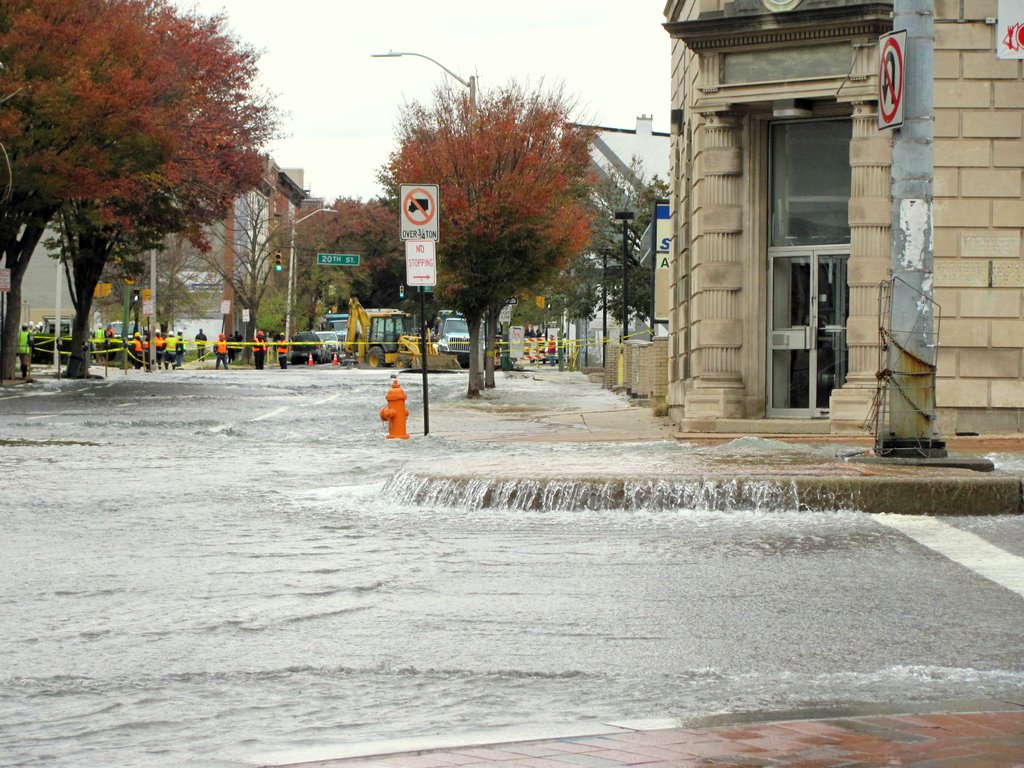 New addition to the streetscape? Waterfall at Charles and North. The water main break can be seen in background. (Photo by Mark Reutter)