(UPDATE, 7:30 p.m. Thursday: Charles Street was reopened from Penn Station to North Avenue, as were the eastbound lanes of North Avenue. Westbound North Avenue between St. Paul and Charles – and Charles between North and 21st Street – remain closed.)

The “River Charles” today ebbed into a babbling brook, but the flow of water from a broken main continued to snarl transport and disrupt businesses at one of North Baltimore’s major hubs.

A city spokesmen said water is expected to spew from the ruptured transmission pipe at Charles and 20th streets through most of today as city crews locate and shut a final series of valves that control the water.

Some of the valves are located miles from the rupture, Kurt Kocher, spokesman for the Bureau of Water and Wastewater, said today. One set of valves is located at the city’s Montebello Filtration Plant, he noted, while more valves are in Wyman Park near Johns Hopkins University .

“There are many, many valves, and many are as old as the transmission pipe. Shutting them down is a slow process,” he said.

Worries Over a Gas Line

Adding to the difficulty has been the need to redirect the water to substitute lines to maintain service to customers. Ironically, the broken line, while located in the heart of Charles North, primarily serves residents in eastern Baltimore County.

Yet another complication, said Kocher, has been monitoring a BGE gas line located underneath the pipe, which is itself buried 17 feet below Charles Street. 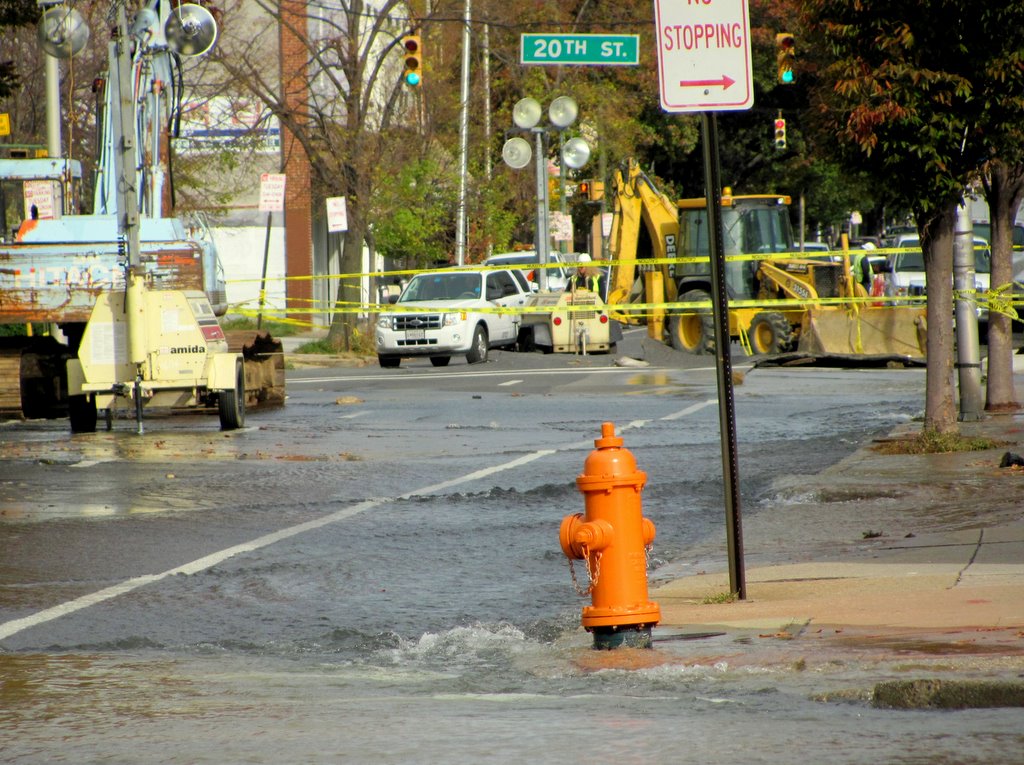 A steady flow of water runs down Charles Street to North Avenue this morning. (Photo by Mark Reutter)

BGE has been concerned that shutting off the water too quickly would undermine the road surface that buckled from the force of the water main break. This could damage the gas line or cause water to enter the system.

So far, that has not happened, according to a BGE spokesman, and the city and utility are cautiously proceeding with the water turnoff.

Once the line is shut, the city will assess the damage and develop a repair plan. “We have replacement pipe ready to go, but we  haven’t seen the [ruptured] line and have no idea of the extent of the damage,” Kocher said. 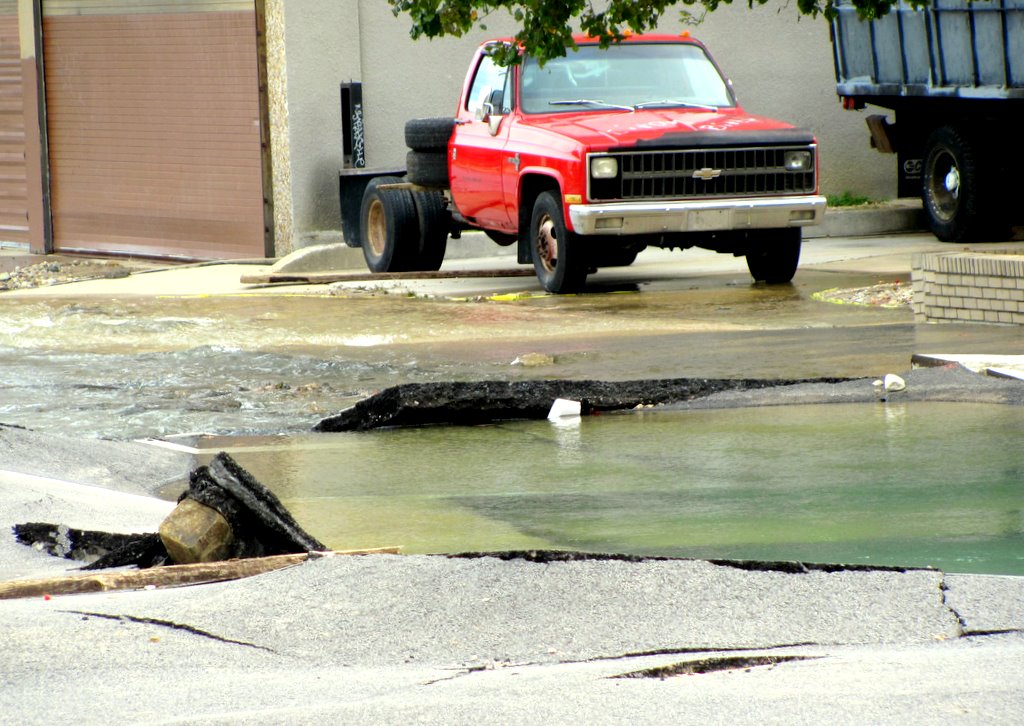 Thick slabs of asphalt buckled under the force of yesterday’s water main break. Water continues to seep through a dozen cracks at 20th Street. (Photo by Mark Reutter)

Repairing the damage will take weeks – and there is no estimate of the cost. Fixing a water main break on Light Street this summer took two months and cost more than $1 million.

East-west traffic continued to be disrupted by the latest water main break, with busy North Avenue closed between Maryland Ave. and St. Paul St. Both cars and buses are being rerouted to 25th Street and (in some cases) Mt. Royal Ave.

Charles Street is closed between Amtrak’s Penn Station and 21st Street. The popular entertainment zone along the 1700 and 1800 blocks of Charles St. was eerily quiet today as city crews cleaned up the street, which was pockmarked with stones and small piles of sand.

As previously noted, most of the businesses were spared heavy damage, thanks to the bulk of the water flowing down the street to Amtrak’s rail facilities located below an embankment at Lanvale St.

Today, an Amtrak contractor cleaned up muck along a service road at the rail yard. 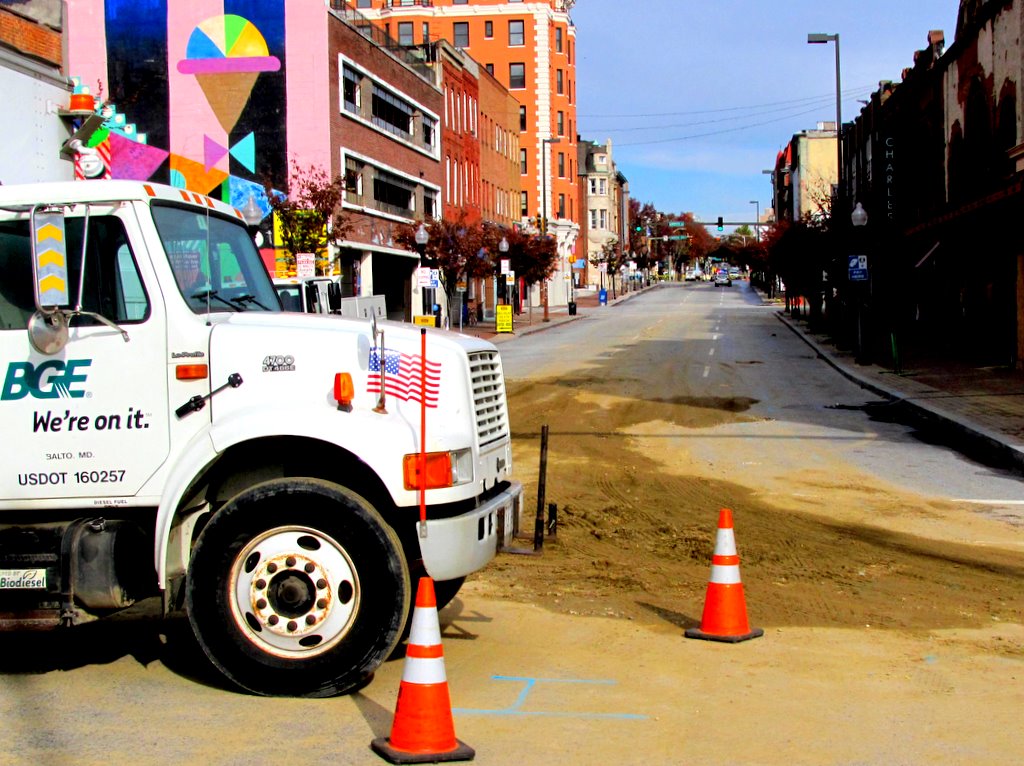