Saying that Anne Arundel County residents will be harmed by a trash-burning power plant just over the line in Baltimore, a group of state and county officials, as well as nearby residents, came together yesterday to voice their opposition to the project – and demand to be included in the discussion.

“These substances don’t respect borders,” said Anne Arundel County Executive John R. Leopold, speaking at a press event in Brooklyn Park, not far from where the 160-megawatt Fairfield Renewable Energy Project would be burning as much as 4,000 tons of ground up-tires, wood waste and shredded auto parts a day.

“It’s unfortunate that MDE [Maryland Department of the Environment] is failing to protect public health and failing to provide notice to affected communities,” Leopold said of the project which, after receiving permission to proceed in 2010 from MDE and the Maryland Public Service Commission, missed its deadline to start construction and is now asking for more time.

“It is outrageous that neither the county government nor the delegation was made aware of this project,” said Del. Steven R. Schuh, who was representing Sen. Bryan Simonaire and Delegates Nicholaus Kipke and Don Dwyer at the news conference.

“To me there’s been a lot of secrecy about this project – the people knew nothing about it,” said Debbie Frank, president of the Arundel Neighborhoods Association, part of a coalition called Brooklyn Citizens United formed to oppose the construction of the plant that Albany, N.Y.-based Energy Answers wants to build.

At a minimum, said Andy Galli of Clean Water Action, opponents want more hearings and more time to allow Anne Arundel stakeholders to comment. The PSC is weighing that request to extend the deadline.

“If we had more time, we could have gotten 1,000 signatures,” said Frank, one of the grassroots opponents who helped collect 200 signatures in Brooklyn and Brooklyn Park by talking to neighbors and standing at supermarkets.

The voices calling for a deadline extension include not just Leopold and state lawmakers but other community leaders. The PSC case file [#9199] includes entreaties to stop the incinerator from the county chapter of the NAACP and Linda Stewart, a.k.a. “Water Bill Woman,” a citizen activist who lives in Curtis Bay. 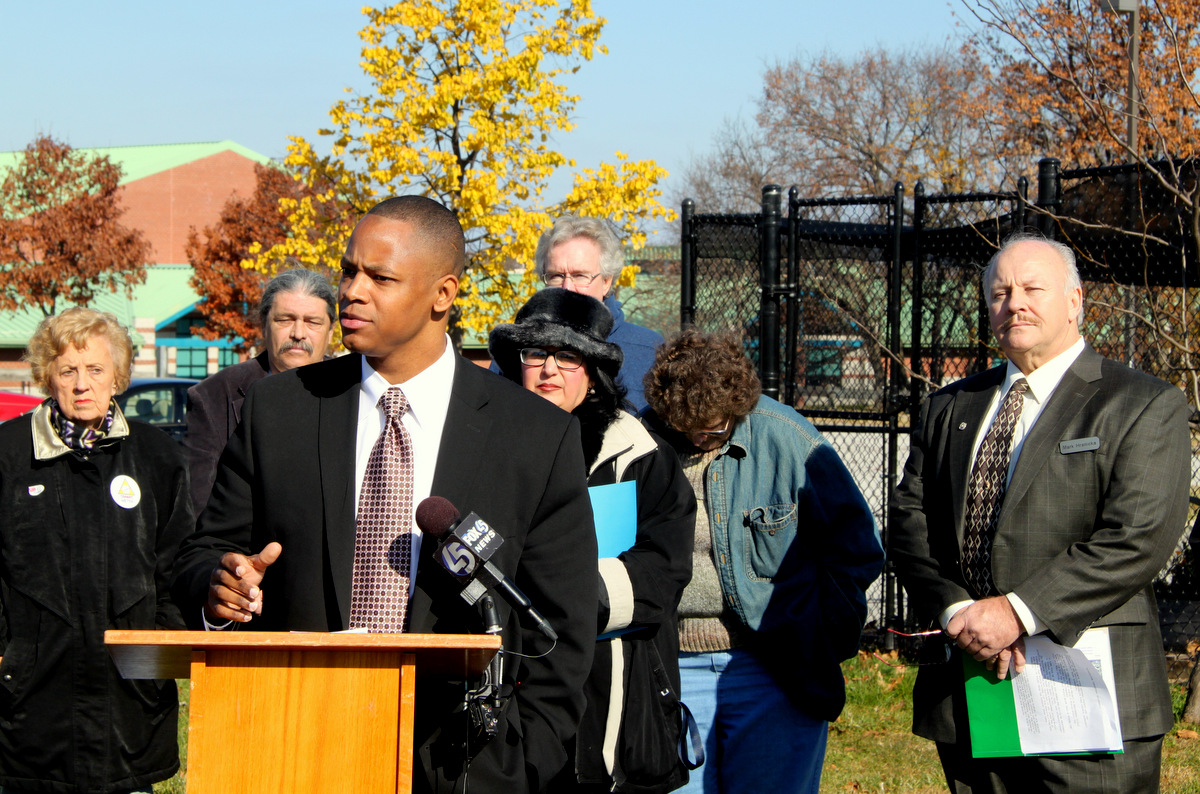 For many opponents, the PSC’s August 30 hearing held at the Curtis Bay recreation center was the first they heard about the trash-to-energy plant, which would be built on the site of the former FMC Chemical facility.

“It was very disturbing,”  Hranicka said, at yesterday’s press conference. “It was what started our grassroots effort.”

240 Pounds of Mercury a Year

Hranicka was one of the residents of nearby communities in the standing-room-only crowd at that August hearing,  listening to physicians and environmentalists testify about the health implications of the emissions allowed by the PSC’s 2010 permit.

The permit allows annually 147 tons of fine particulates, 601 tons of nitrogen oxide, 446 tons of sulfur dioxide and 1,000 pounds of lead, among other substances.

“I have every reason to believe that these chemicals and other pollutants would affect not just my neighborhood but resident homes all over Northern Anne Arundel,” Hranicka said yesterday. 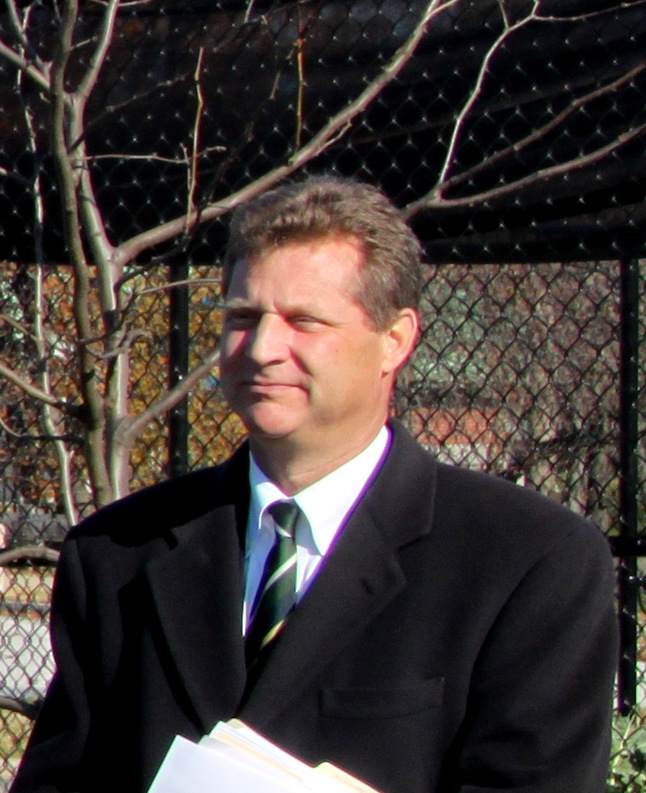 “We’re talking about lead, mercury, nitrogen oxide and other compounds known to cause cancer, to cause respiratory disease, to cause developmental disorders,” said Schuh.

He and other speakers also raised concern about the impact of the potential 200 trucks-per-day bringing in the trash to the plant.

County Councilman Peter I. Smith asked why MDE, in allowing the permit to go forward, made an exception to the state law requiring that solid waste incinerators may be no closer than one mile to any school.

“If a trash plant is more valuable than the health of these students, it’s a sad day in this country,” Smith said.

He noted that there are four public schools and several parochial schools in the Brooklyn and Curtis Bay neighborhoods within a mile from the boundary of the plant.

Support from O’Malley and Rawlings-Blake

The plant may face opposition in places like Brooklyn Park and Cherry Hill, but it appears to have key support elsewhere, including City Hall and Annapolis.

In October 2010, Energy Answers officials hosted O’Malley and Rawlings-Blake, as well as U.S. Rep. C.A. “Dutch” Ruppersberger, labor leaders, a community organization and representatives from the Environmental Protection Agency for a ceremony kicking off the project.

The plant was described as an environmental boon, because it would divert waste otherwise clogging landfills, and an economic boost for a struggling community (because it would bring 400 construction and 180 permanent jobs.)

Company officials argued that, as renewable energy facility burning shredded waste, it would burn more cleanly than unprocessed trash and should not be regulated as an incinerator.

Last year, O’Malley and state legislators handed Energy Answers more support in the form of a bill that classified waste-to-energy incinerators as a “Tier 1” renewable source of energy – eligible, like wind turbines and solar panels, for lucrative energy credits.

The company, meanwhile, has been generous in its contributions to the campaign funds of Maryland politicians, according to documents on file with the state, as The Brew reported in August. 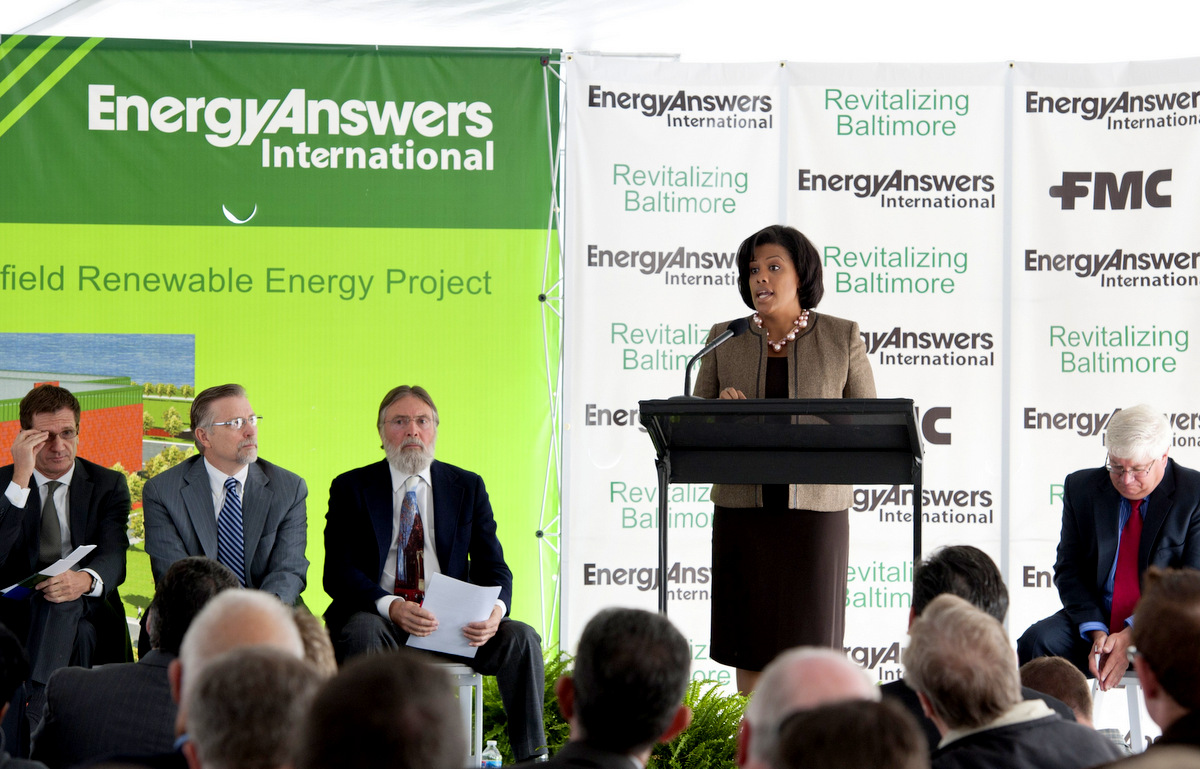 • Another contribution, as the Baltimore Sun first reported, was made to the Democratic Governors’ Association. During the first six months after O’Malley took the helm of the DGA in 2010, Energy Answers International gave the Association a total of $100,000.

What Falls From the Sky

Several speakers yesterday pointed to other environmental battles that have soured northern Anne Arundel on new projects.  Leopold spoke of fly ash issue in Gambrills, where Constellation Energy dumped fly ash in a mine leading to a multimillion dollar settlement with residents. 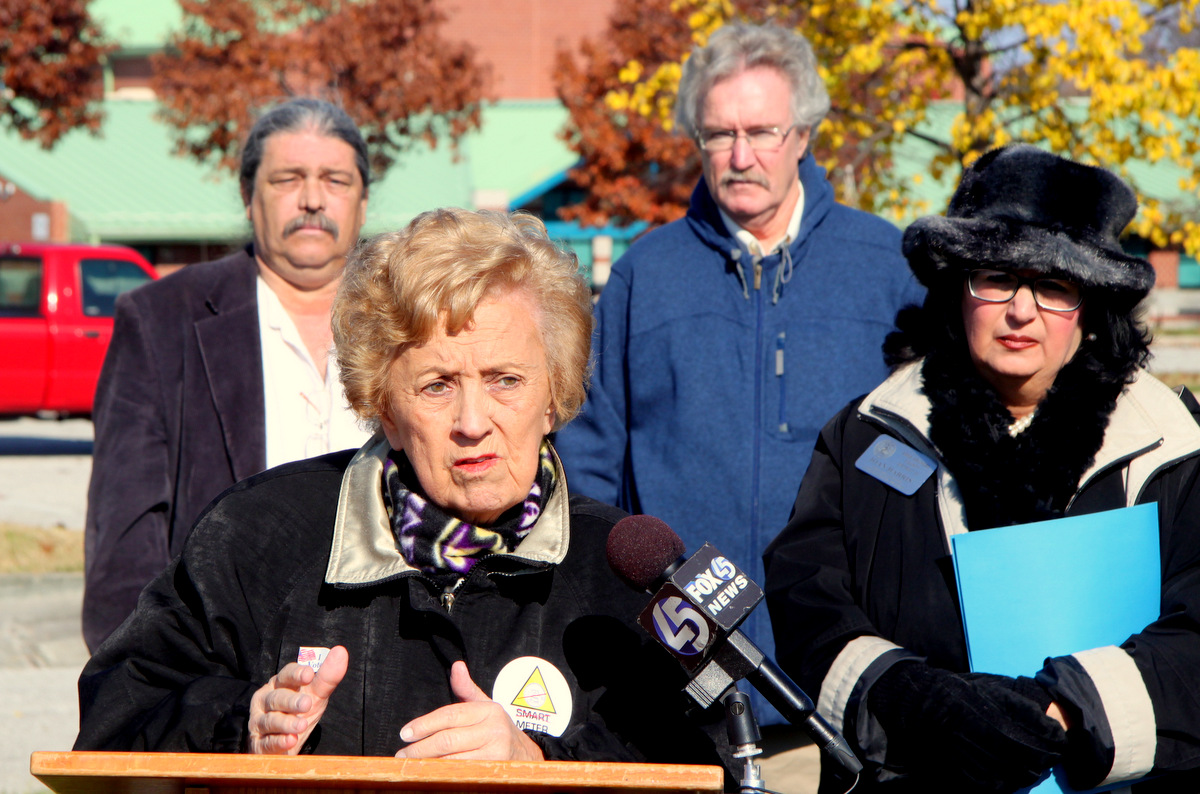 Cecelia Fabula, of Brooklyn Park, said the state has been failing to protect citizens from industrial polluters for years. (Photo by Fern Shen)

Schuh spoke of state legislators’ letter to the PSC, which notes that the Energy Answers plant would emit three times the mercury and 25 times the lead of the two coal-fired power plants currently operating in the county.

Cecelia Fabula, of Brooklyn Park, said she has been fighting battles against industrial pollution for 35 years and has little faith in state regulators.

“The MDE is a rubber stamp,” she said, explaining what motivates her to be active on the issue.

“My brother died at 59 of cancer,” she said, noting that he lived near Curtis Bay industrial facilities. “That’s a result of those things that fall from the sky.”