As the judges and professors at the podium spoke about the University of Baltimore School of Law Truancy Court Program yesterday, many of the people with the day-to-day job of making it work sat quietly in the audience listening.

“I’m so proud to be part of it,” mentor coordinator Anthony “Bubba” Green said afterwards.

The event was organized to announce that AT&T had just awarded a $300,000 grant to the truancy program and the school’s Center for Families, Children and the Courts, which runs it.

The eight-year-old program takes a supportive team-based approach to combatting the problems that are keeping Baltimore students from showing up at school: asthma, lack of a school uniform, fear of gang violence, sick or elderly family members at home who need care, poverty, whatever it might be.

“Attendance is just the tip of the iceberg,” Green said, going on to list some of the issues affecting the children he’s working with right now.

“One young man, his cat just died. We’re in the process of helping him get another. One child, their clothes are not clean. For another, it’s transportation,” Green said, explaining that teaching time management is often his best way of helping the students.

“In one case, the young man has to take his siblings to their schools,” Green said. “I’m talking to him about ‘Is your backpack ready the night before? Are you getting up in time?’”

Sometimes they just provide the children with alarm clocks.

Started in 2005, the program offers students consistent support and resources – in hopes of keeping them in school and out of the justice system.

The new grant will allow them to expand services to more schools in Baltimore, including schools serving eighth and ninth graders. The grant will also allow for enhanced case management, staff training on how to intervene if a student is truant and group discussion and mentoring sessions. 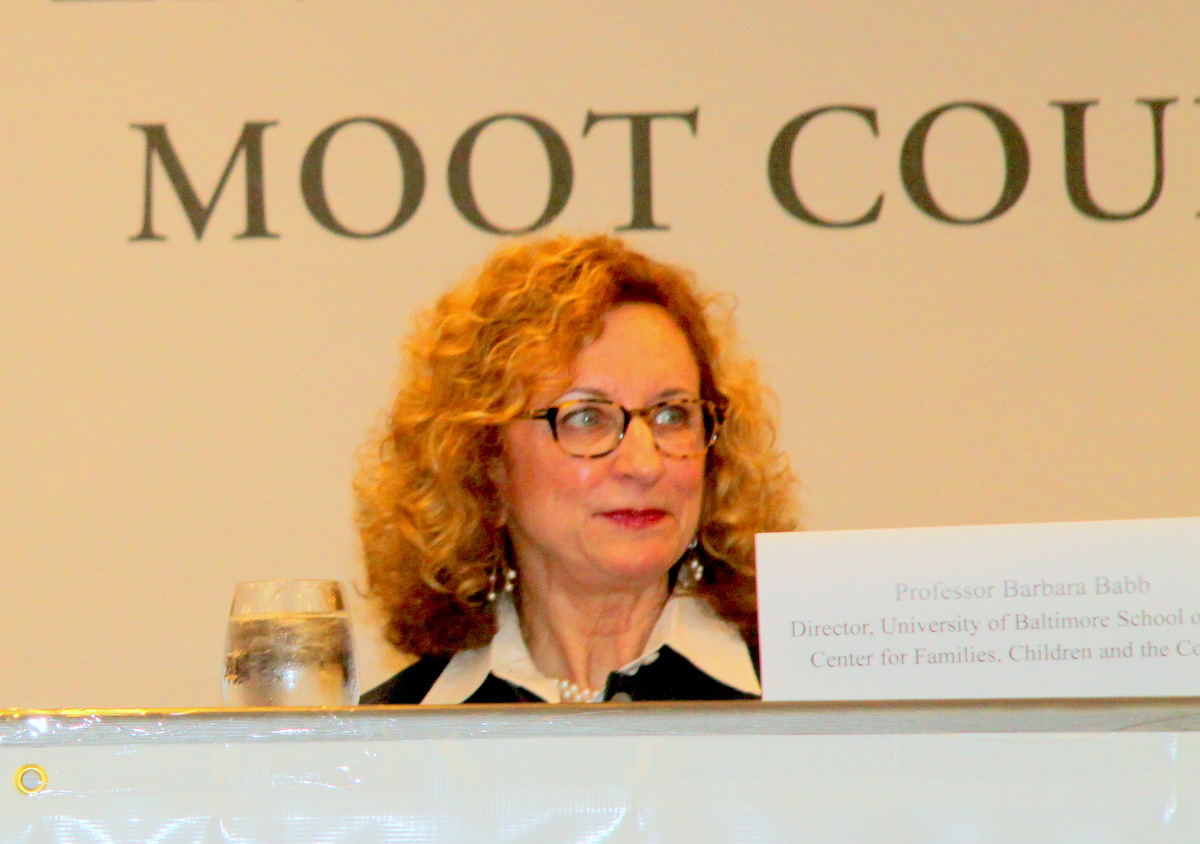 The program consists of 10 weekly in-school sessions with a city judge, a center staff person, a law student, the child and the child’s family.

The team identifies the underlying reasons for the truant behavior and develops a plan to deal with them. Mentors and volunteers are brought in as well.

The judges don’t hand out punishment, but rather, solutions, guidance and sometimes little rewards. If one girl graduated, Baltimore City Circuit Court Judge David Young told her, he would dance on the table. 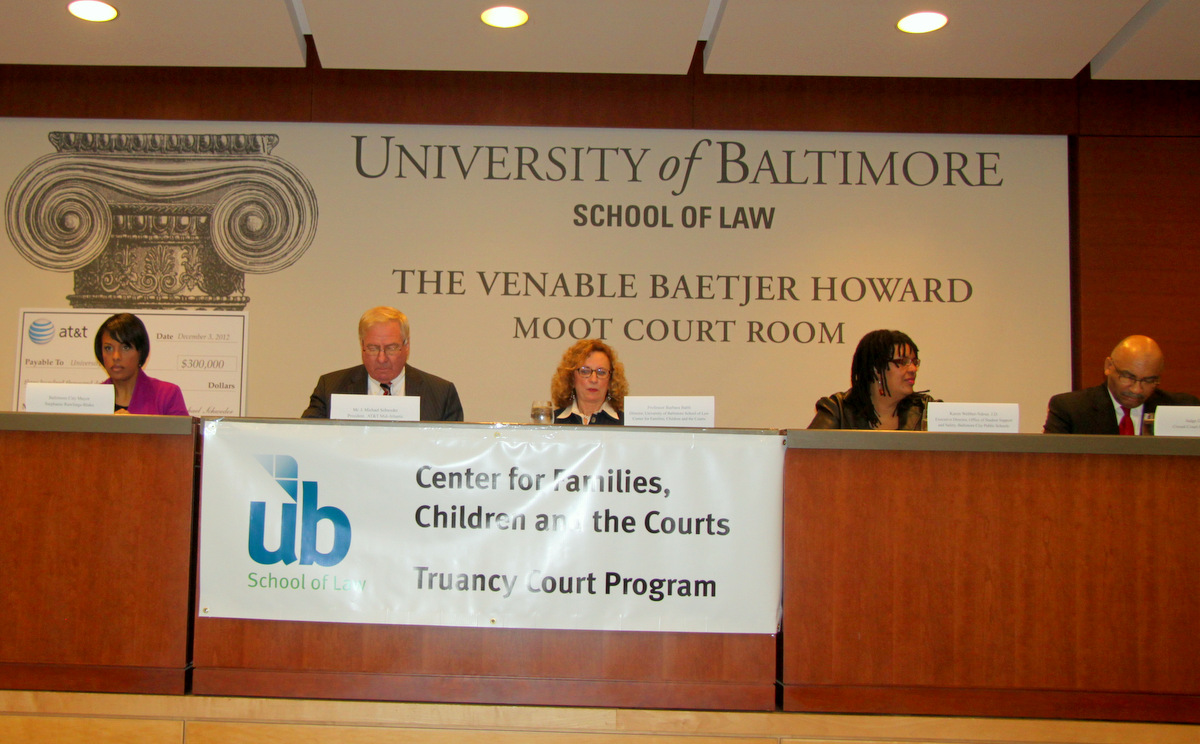 University of Baltimore School of Law announced a $300,000 gift from AT&T to expand their truancy court program. (Photo by Fern Shen)

“Turns out I have to keep my promise,” the judge said yesterday. “I’m practicing my moves.”

Students “graduate” from the program if they decrease their unexcused absences by 65%, said Professor Barbara A. Babb, director of the program and center.

Mayor Stephanie Rawlings-Blake put in an appearance to lend her support. As with other speakers, she noted that there are times when compulsory education laws must be enforced to compel parents to get the children to school.

But she said through her work as an attorney in the city she has come to understand the pressures on city parents and their need for a helping hand. “Some of these women you could tell had difficulty because they had not gone to school themselves. Some of them were struggling with addiction, or not having enough resources to support themselves,” she said.

Rawlings-Blake, who has been supportive of initiatives to increase city school graduation rates, said that, among the many approaches to lowering the achievement gap, focusing on getting students to simply show up is one that she favors. 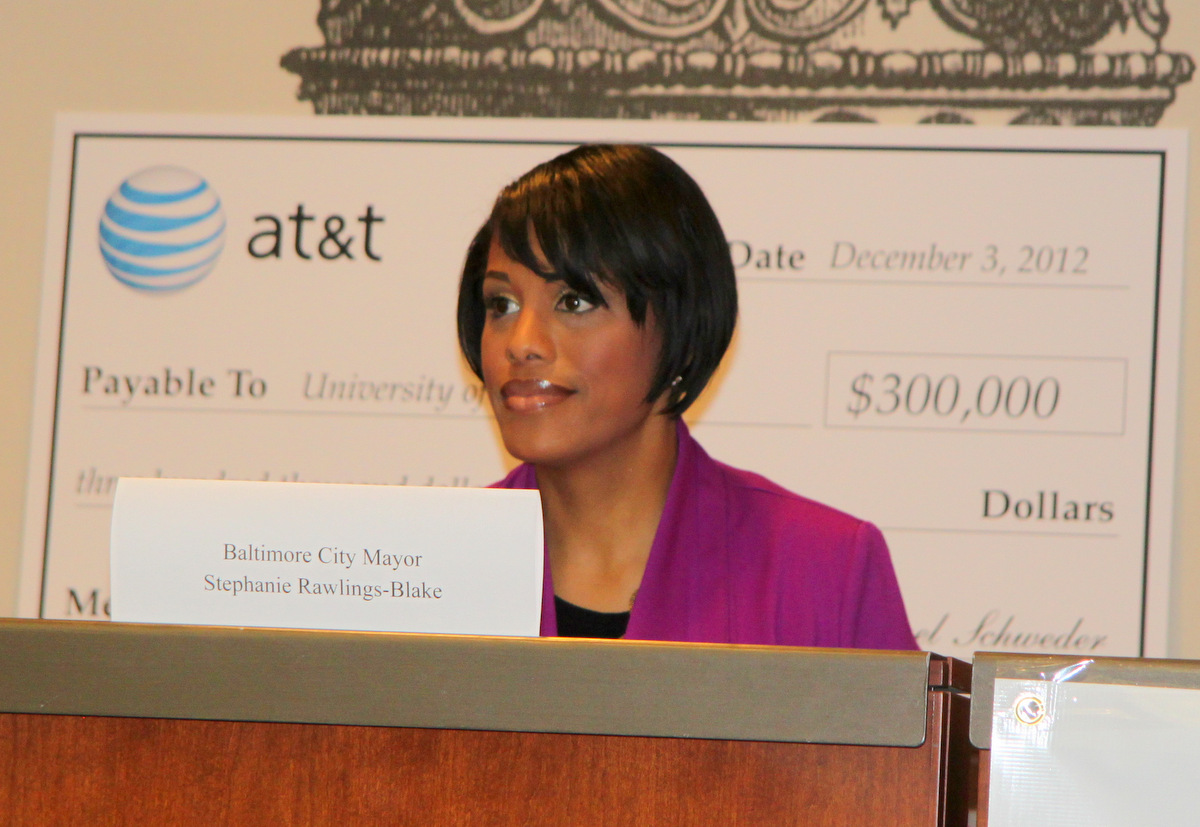 Being a parent herself helped Mayor Rawlings-Blake sympathize with parents’ struggles to make their children go to school. (Photo by Fern Shen)

“It’s not a rich or poor, black or white issue, it’s just attendance,” the mayor said.

“It’s letting them know people care” whether they come to school or not, said Karen Webber-Ndour, director of student support services for Baltimore City Public Schools.

She said she came to realize that message was more important than “the wonderful trips I provided,” as a principal, “or the wonderful programs I created.”

Judge Young said he has also had a kind of epiphany about the subject since getting involved with the program, which he praised as “data-driven and competently delivered.”

“I had my 15 minutes of fame years ago. I was on The Oprah Show because I was putting people in jail for not sending their kids to school,” Young said. “When I look back, I’m not proud of that at all.” 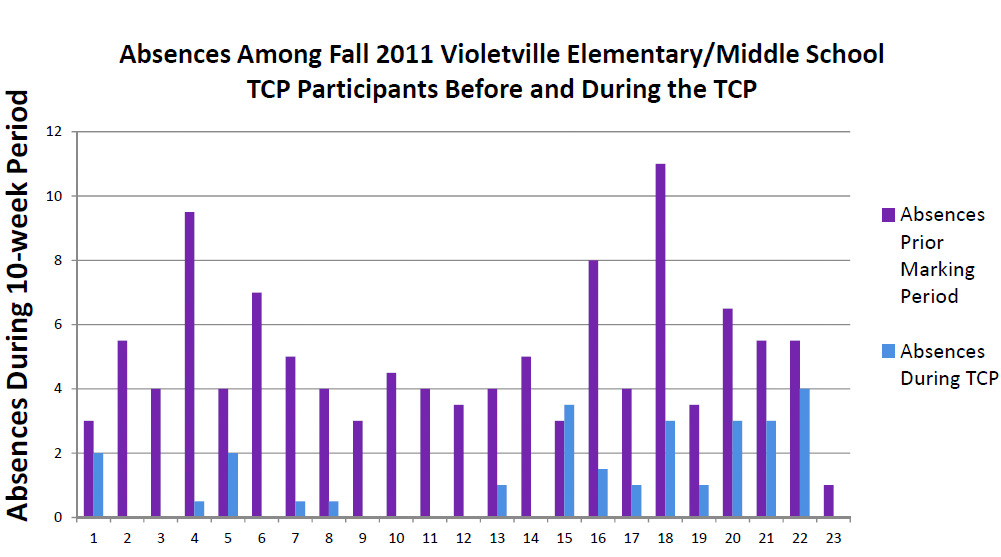 The blue bars are 2011 absences at Violetville Elementary/Middle School during the Truancy Court Program. The purple bars are absences in the prior marking period. (Source: University of Baltimore School of Law)