Preston Greene says the delays and disappointments have become so numerous that “I’ve almost become numb to it.”

The president of the Howard Park Civic Association is referring to a 13-year-long battle by residents to attract a grocery store to a Northwest Baltimore neighborhood known as a “food desert.”

The community thought the war had been won when Mayor Stephanie Rawlings-Blake announced during her election campaign in 2011 that the Klein family would purchase the city-owned property at Liberty Heights and Gwynn Oak avenues and build a ShopRite supermarket.

“We fought very hard for this day,” Rawlings-Blake said in a news release, while more than 100 residents met at the New All Saints Church to rejoice in the news.

Originally scheduled to open early next year, the supermarket has yet to break ground. It’s been hobbled by slower-than-expected demolition and other site-related issues. But most frustrating to Greene is the latest holdup – a restrictive land covenant on a small parcel of the lot.

“The city has known about this issue since November 2010. It’s something that the city could have settled in 60-90 days, but for some reason it hasn’t,” Greene said.

Howard Klein, of Klein’s Family Markets, says his group can’t secure construction financing until the covenant, which prohibits locating a pharmacy on the land, is annulled or condemned.

The covenant was placed on the property years ago by Rite Aid, which once owned a pharmacy on the site and did not want a competitor. The pharmacy is long gone and the building itself has been torn down, but the covenant remains in effect. 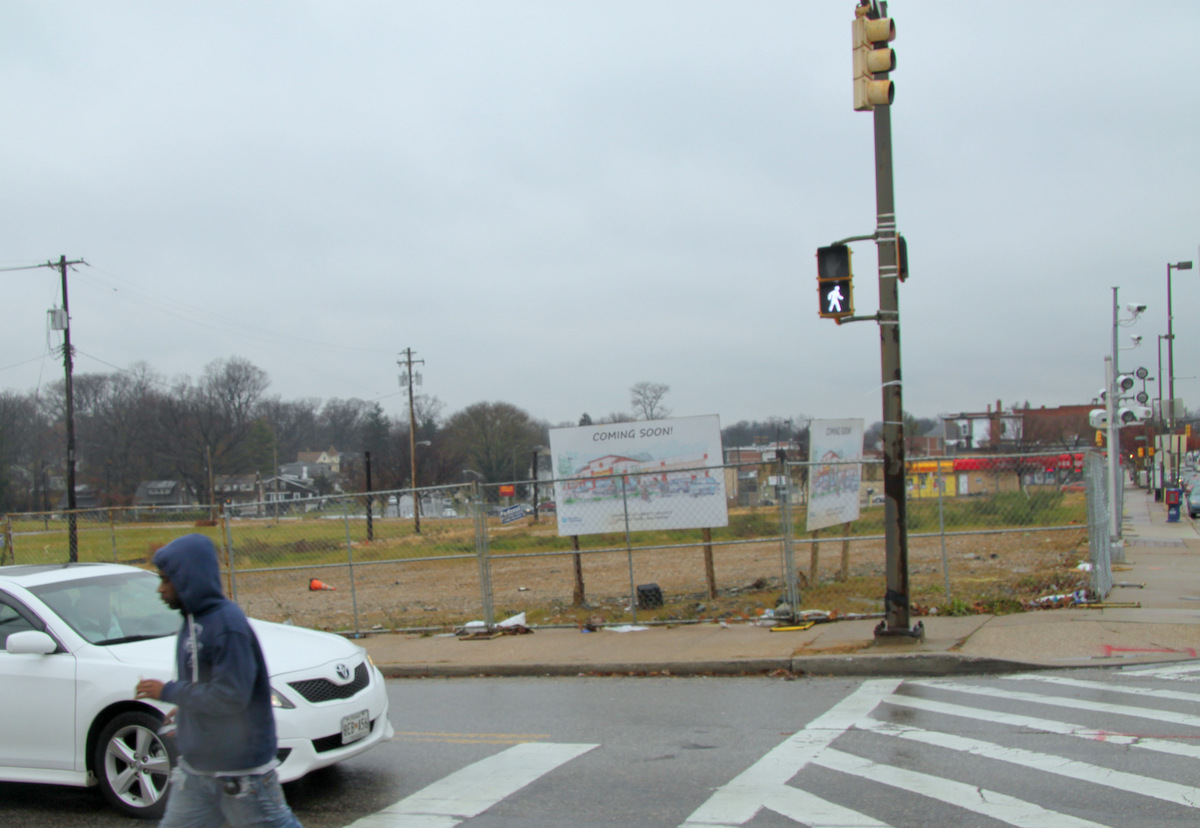 The area where the SuperPride store was demolished is now empty and trash strewn. (Photo by Fern Shen)

Klein says the city will need to file a civil action to condemn the covenant or disclaim it as having no effect on the ShopRite store, which will include a full-service pharmacy.

George Nilson, the city solicitor, agreed that the Rite Aid covenant must be settled before the city can sell the land to the Klein group.

“We believe this issue and other matters can and will be resolved,” Nilson told The Brew. He said he had been personally aware of the Rite Aid issue “for roughly a year,” and city lawyers were determining how best to proceed.

“I expect the documentation and closing to occur in the near term rather than the mid term or the long term.” Asked for an approximate date, Nilson replied, “Early in 2013. Maybe January. Maybe February.”

Once the land is obtained from the city, Klein said his group expects to build the 68,000-square-foot supermarket in 10 months. Speaking to The Brew yesterday, he held out hope that the supermarket might open its doors in December 2013.

The painstakingly slow process of finding a supermarket for Howard Park, a neighborhood of mostly detached homes that originally was a suburb of the city, was symbolized by the large rusting sign that hung for years above the boarded-up SuperPride store in the 4600 block of Liberty Heights.

The city’s economic arm, the Baltimore Development Corporation, began planning for a new grocery store a decade ago. The BDC has since spent more than $2.5 million to purchase the abandoned SuperPride, Rite Aid and other buildings and to relocate tenants remaining in the once-thriving commercial district.

The agency completed its assembly of 6.6 acres of land in November 2010 and began negotiations with the Klein family and another investor, Jeffrey Brown, to sell the property for a ShopRite.

The agency was allocated $1,030,286 in 2011 by the Board of Estimates to prepare the site. Included was $428,300 to tear down the SuperPride building by P&J Contracting, headed by “demolition king” Pless Jones.

According to a BDC memo, demolition was completed in August 20, 2012 and construction permits were issued by the cite on August 24. The developers are currently assessing the bids of potential building contractors. 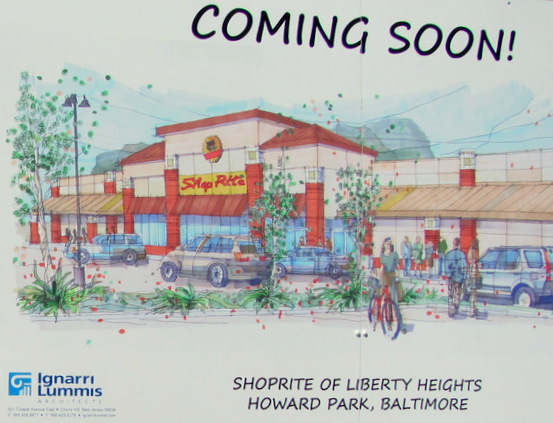 2011 sketch of the planned supermarket. (Photo by Mark Reutter)

Once the covenant issue is settled, the city has agreed to sell the 6.6 acres to Liberty Heights Shopping Center LLC, which is majority-owned by the Kleins, for $2 million.

All payments on the property, however, will be deferred until “the eighth year of the project,” which presumably means year 2021 if the pact is signed in 2013.

“We are reasonably confident that the supermarket will get build, eventually,” said Howard Park leader Greene.

But he said the civic association is so concerned about the delays that it met in executive session last night to draft a letter to elected officials concerning the supermarket delays.

“We are pleased with the sensitivity and cooperation that’s been shown by the Klein family and Jeffrey Brown,” Greene said. “But there have been so many broken promises by the city. What we need now from our elected officials is action.”

For his part, Howard Klein says he’s been pleased with the services he’s received from the city. “The BDC has been phenomenally helpful. They have helped us navigate through the development process and offered advice and counsel.”

Klein said his family, which owns and operates eight ShopRites in Maryland, plans to spend about $6-7 million on construction and another $6½ million for the store’s interior fit-out.