Making last-minute adjustments to tuxes and tiaras, the people preparing to be married at Baltimore City Hall last night looked both ecstatic and anxious, as wedding couples have through the ages.

But these marriages were extra-momentous – gay couples were exchanging vows in a national spotlight just after the stroke of midnight, as Maryland’s new law allowing same-sex couples to marry took effect.

“This marriage is not customary – it is historic! Tonight, Lisa and Biggie celebrate their relationship but they also celebrate and claim a civil right!” said Circuit Court Judge Gale E. Rasin.

Rasin was officiating at the marriage of Lisa Walther and Brigitte M. Ronnett, one of the seven couples who were married in wee-hours City Hall ceremonies today.

Across the city and state, gay and lesbian couples reportedly were marking the New Year in similar fashion, exercising a right won after a years-long battle that culminated in a statewide ballot victory in November. 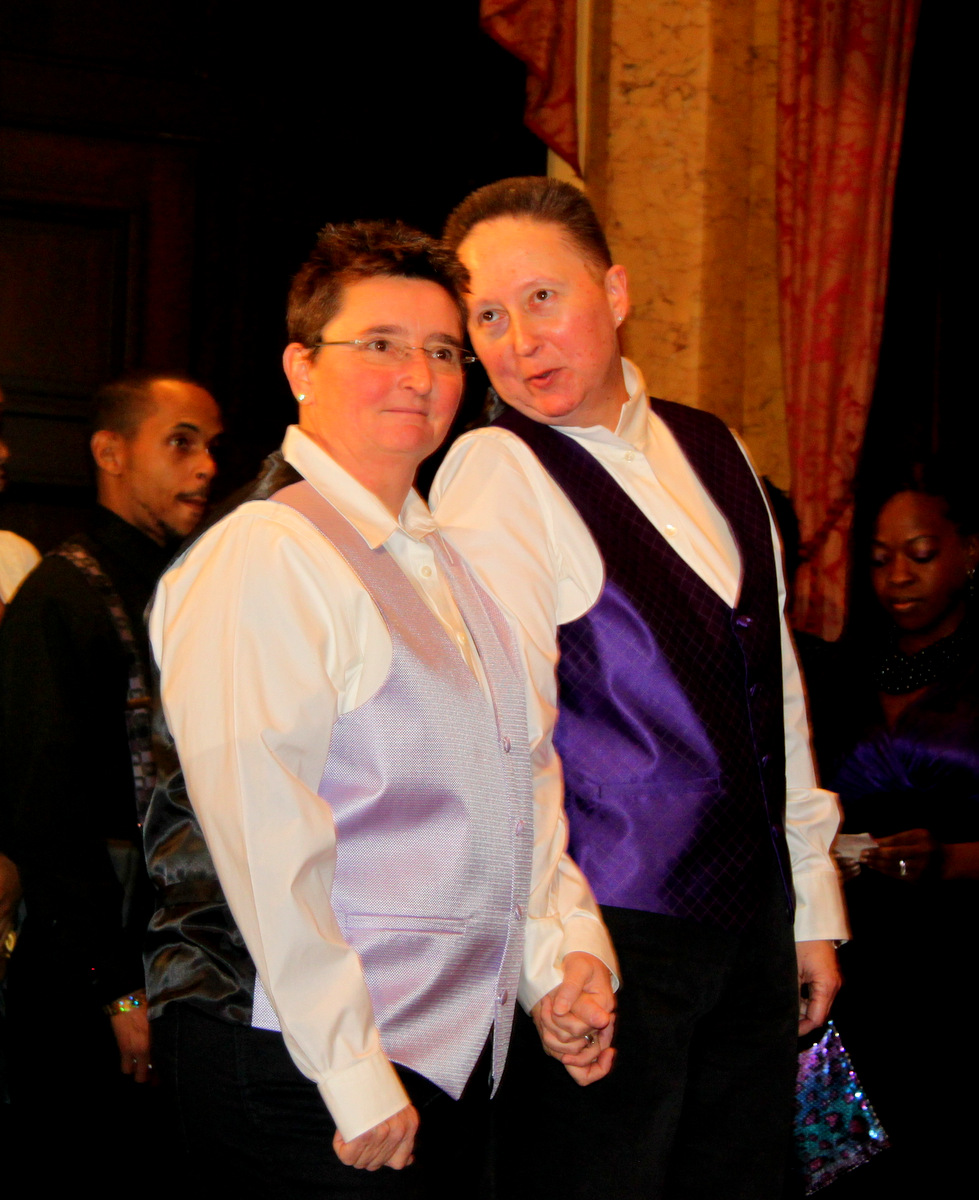 Lisa Walther and Brigitte Ronnett wait their turn to be married at Baltimore City Hall. (Photo by Louie Krauss)

With voters’ approval of Question Six, Maryland became the first state south of the Mason-Dixon line to legalize same-sex marriage.

“It’s just so hard to believe it’s happening,” James Scales said, as he held the hand of the man he was about to marry, his partner of 35 years, William Tasker.

Adding to the excitement, city employee Scales – an office manager for  William Donald Schaefer and every Baltimore mayor since – was about to be married by his current boss.

“We Chose Equality over Hate”

Scales, 68, recalled how Mayor Stephanie Rawlings-Blake promised him that if Question Six passed, she would preside over the nuptials herself.

“She was excited about this all day,” said Scales. (Monday was a work day for him.)

Under chandeliers in the ornate Ceremonial Room, watched over by 20 friends and family, a gaggle of media and the silent visages of former mayors in oil paintings lining the walls, they waited for Rawlings-Blake to arrive from New Year’s fireworks festivities at the Inner Harbor.

During the ceremony, the mayor was by turns solemn (“There is no human institution more sacred than that of the bond you are about to form.”) and jolly (“Jim and Bill – you may kiss!”)

Asked later by a reporter, Rawlings-Blake acknowledged that while she can conduct wedding ceremonies as mayor, she has gotten ordained to make sure marriages where she officiates are legal. (“Getting married?” she joked. “I’m available!”) 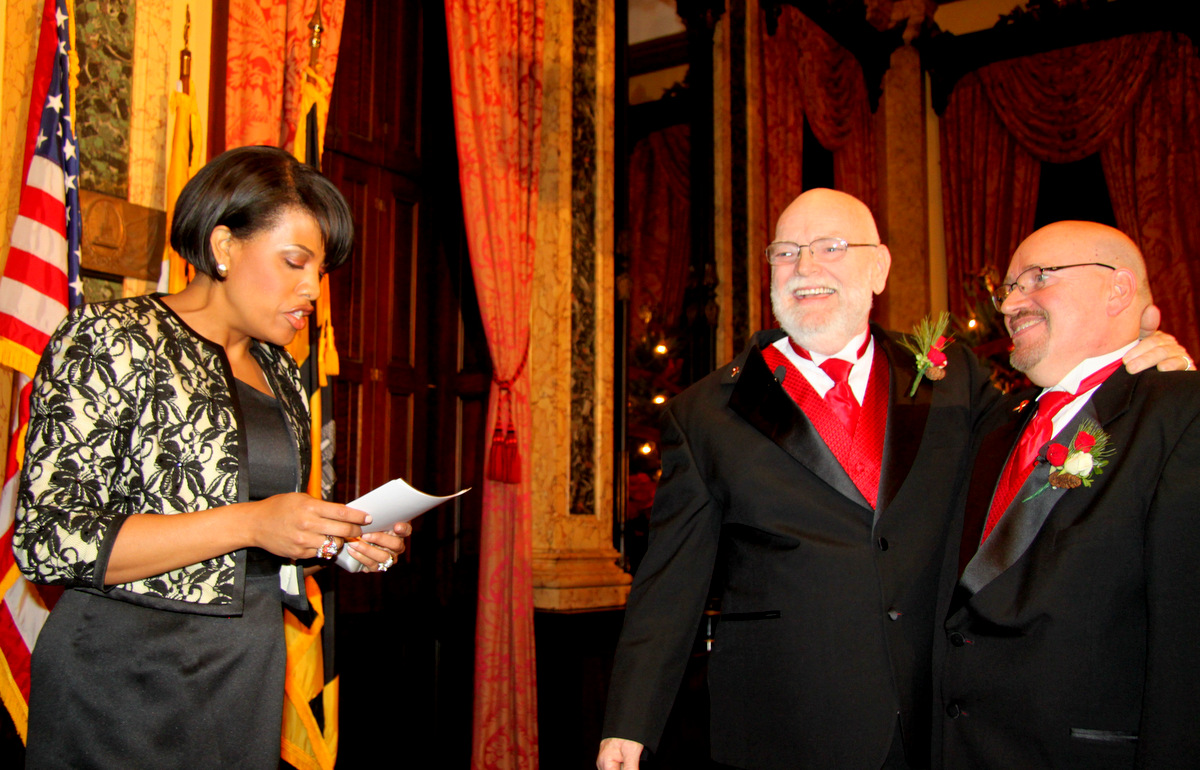 James Scales and William Tasker were wed early this morning in City Hall by Mayor Rawlings-Blake. (Photo by Louie Krauss)

Addressing the crowd, Rawlings-Blake tried to convey the significance of the milestone, reached after a bruising battle over the Marriage Equality measure that she, Gov. Martin O’Malley and others championed.

“It’s a very emotional night, an incredibly meaningful night. There’s so many people who have a chance now to have the life they wanted for themselves and for their family,” she said. ”I’m so proud for Maryland, that we chose equality over hate.”

Opposition from the Archbishop

Past efforts to win marriage rights for gays had foundered in Annapolis. A 2011 bill that passed the Maryland Senate stalled in the House of Delegates.

But in 2012 – this time with exclusions for religious organizations and with full-throated support from O’Malley and other Democrats – the measure passed.  Opponents collected roughly 160,000 signatures, more than enough to put same-sex marriage to a statewide vote.

The Maryland Catholic hierarchy fought the bill hard from the pulpit, with Archbishop William E. Lori also appearing at anti-Question 6 events and on television spots. He even personally contributed $2,000 toward the measure’s defeat.

But the opponents were outspent. Marylanders for Marriage Equality raised about $5.9 million (more than twice the opposition.)

Voters approved the ballot issue 52%-48% in the November general election.

As the couples prepared for this  morning’s ceremonies, they were asked what changes for them, legally, with marriage.

“There’s actually a number of advantages, we learned. For instance there is some greater protection of our property rights, ‘tenants in the entirety,’” said Ronnett, a Johns Hopkins pathologist who lives with Walther in Canton.

“If he was to die, I wouldn’t have to pay inheritance taxes,” Scales said. “And in 2014, we’ll be able to file joint [tax] statements. But we still have a ways to go on the federal side.” 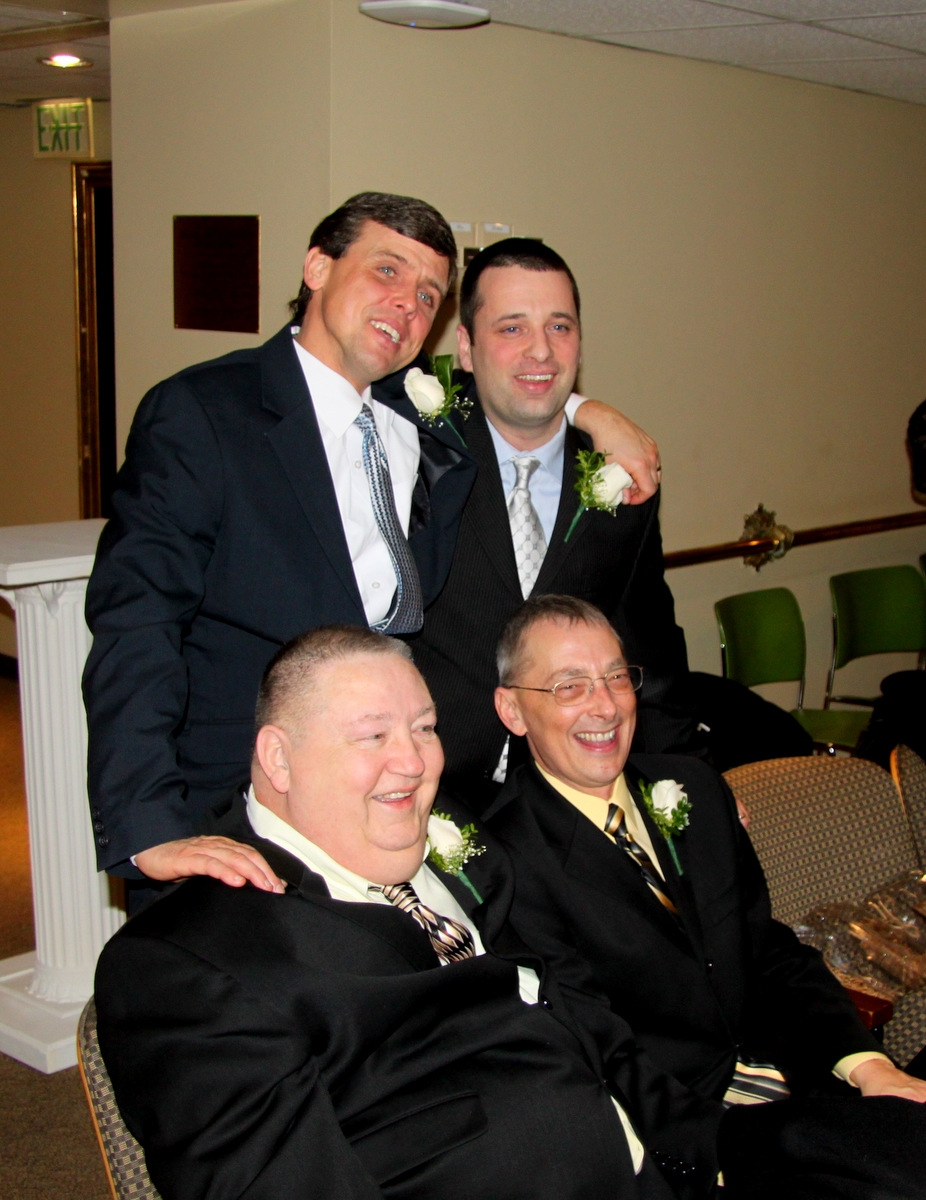 William Countryman and Roy Neal (seated), with friends, as they wait their turn for a Baltimore City Hall New Year’s Day wedding. (Photo by Louie Krauss)

He was referring to pending issues before the U.S. Supreme Court.

The  justices said they will hear two constitutional challenges to state and federal laws associated with legal marriages for gay and lesbian couples.

One involves the federal Defense of Marriage Act (or DOMA), which denies federal benefits to same-sex couples legally married in their own states.

The other is a challenge to California’s Proposition 8, that took away a right of same-sex marriage that had been approved by the state’s courts.

Living as they do in Pennsylvania, William L. Countryman Jr. and Roy Allen Neal are looking forward to favorable decisions on the federal level to reap the legal benefits of their Baltimore City Hall wedding today.

A paralegal who works in Baltimore, Neal said that he and Countryman, a nurse, have had no trouble with hospital visitation or other issues. Like several of the couples in this morning’s City Hall Gay Marriage Class of 2013, they seemed amused by the idea of being called newly-weds.

“We’ve been together for 30 years,” Countryman said, as the two cracked jokes with two friends taking on the Best Man role. “Not much is going to be that different.”

“It’s so funny,” said Ronnett, who has been with Walther for 22 years. “Here we are getting married today and meanwhile, two years ago, we were already taking a trip to celebrate our 20-year anniversary.”

Reporters kept asking Scales and Tasker, as the first couple to wed last night, what their marriage meant. “It means maybe marriage equality is going to be embraced by all the states and by the federal government,” Tasker said.

Yes, they asked, but how does it feel? At one point Scales answered it this way. “I guess it’s a little more security. And people don’t feel so much like they have to live in the closet.”