The laid-off Baltimore ESPN Zone workers who won their lawsuit against the Walt Disney Co. subsidiary last week are claiming a victory that’s larger than their two-year-old class action suit.

The ruling by a federal judge Thursday that workers were underpaid when the Inner Harbor attraction closed abruptly in 2010 supports, they say, a broader critique of a city economic development policy that they say relies too heavily on tourism-oriented service industry jobs.

“We have been calling on city leaders and developers to address human rights abuses at the Inner Harbor for years,” said former ESPN Zone host Emanuel McCray, in a statement released by United Workers.

The group has been advocating for employees there and for other low-wage workers at waterfront restaurants and attractions.

“I hope that this important federal court ruling will spur a renewed energy to rethink development in Baltimore so that our public resources are used to ensure work with dignity,” McCray said.

That the litigation was about more than money comes through in the voices of workers who rallied outside the Pratt Street attraction after it, along with four other ESPN Zone locations nationwide, was closed down.

In the October 2010 video below, former ESPN Zone employee Leonard Gray said he found out about the closure through Facebook and that other longtime employees learned about it on television news.

“We felt like we were disposable cups, thrown out when we were no longer needed,” said Gray, who worked at the sports-themed arcade and amusement attraction for six years.

“If it wasn’t for the media leaking it out, we would have came to work on June 15 with the doors closed and locked.”

The suit against Zone Enterprises of Maryland, on behalf of 140 full and part-time workers, charged that the company failed to give employees 60 days notice as required by the federal Worker Adjustment and Retraining Notification (WARN) Act and to properly pay them for that 60-day period as required by the law.

Guard: “This is Private Property”

United Workers has been alleging widespread human rights abuses at Inner Harbor businesses since 2008, including abusive working conditions, chronic wage theft, a lack of health insurance and sick days, and a failure by the city to respond adequately to workplace injuries.

Employers have generally rebuffed the group’s efforts to discuss these complaints, including ESPN Zone landlord, the Cordish Company. According to United Workers, they still have not responded to the group’s requests to discuss their 2011 report, “Hidden in Plain Sight.”

Video of a 2010 rally (above) shows a security guard attempting to disrupt Rev. Roger Scott Powers as he participates in a rally supporting workers outside the ESPN Zone.

The workers’ group has also taken to task the Baltimore Development Corporation (BDC)  for subsidizing waterfront developers and businesses without holding them accountable for mistreatment of workers and inadequate pay.

Cordish, as The Brew first reported, sought $3 million in rent relief from the city for his Power Plant properties. So-called “living wage” bills have been proposed in the Baltimore City Council but haven’t – as this report on the City Council’s response – gotten far. 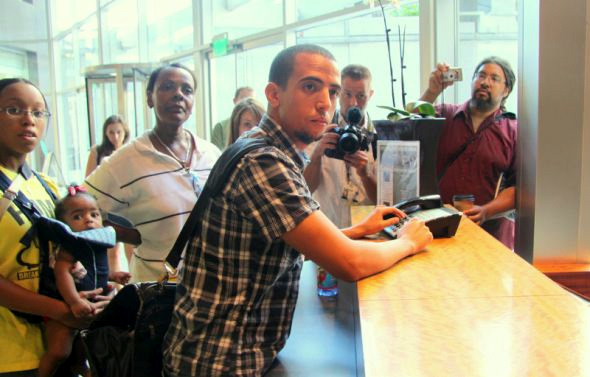 United Workers protest “preferential treatment” given to developer David Cordish outside the offices of the BDC in 2011. (Photo by Fern Shen)

Workers have scored some victories.

Employees of the Baltimore Hyatt hotel complained this year to the National Labor Relations Board (NLRB) that they were being spied on, harassed and even fired as retaliation for talking with the national hotel  workers’ union, Unite Here!

In November, the NLRB filed a complaint on their behalf. The Hyatt says its handling of employee disciplinary matters was justified and not improper.

A trial is scheduled on January 14.

“I Had a Beautiful Job”

As for former ESPN Zone workers, they are awaiting recalculation of their severance packages but also looking back on the disruption they suffered as a result of the company’s abrupt shut-down.

Several had to move out of their homes and experienced homelessness after losing their jobs and receiving inadequate severance packages, United Workers organizers said.

“I had a beautiful job. I loved going to work every day,” said ESPN Zone chef Winston Gupton, fighting back tears in one of the 2010 videos shot after the place was shuttered. “And then for them to snatch the rug out from under me . . . us, with no respect, no kind of solutions.”

In their 2011 report on conditions at Inner Harbor workplaces, United Workers argues that experiences like Gupton’s are endemic to the service industry jobs offered by out-of-town companies – employers the city has been encouraging at Baltimore’s waterfront since it was developed in the 1970s:

“Job creation has been addressed as a simple matter of quantity – how many jobs created – not quality.”