Mayor Stephanie Rawlings-Blake today presented a 10-year financial forecast so bleak that it led to a published report that Baltimore is facing “financial ruin” and “bankruptcy.”

In fact, the city’s current 2013 budget is balanced, there is $90 million available in a “budget stabilization reserve,” and next year’s projected shortfall of $30.3 million is modest compared to recent budget deficits.

Still, the forecast by the Philadelphia-based PFM Group – that the city faces a cumulative budget deficit of $745 million over the next decade as well as $3 billion in unfunded retiree liabilities – was enough to produce an AP news article saying that Baltimore city government “is on a path to financial ruin and must enact major reforms to stave off bankruptcy.”

Reporters questioning the mayor over the prospect of municipal bankruptcy got this response, “This is about being pro-active to get around that [bankruptcy].”

Softening the Blow of Budget Cuts

The mayor’s media presentation – and report by PFM – was clearly aimed at softening political opposition to cuts in the upcoming 2014 budget and changes in the way employee pensions and health benefits are paid.

Beginning with her “State of the City address” before the City Council next Monday, Rawlings-Blake said she will propose “a bold set of major reforms to address the fiscal challenges outlined in the Ten-Year Fiscal Forecast.”

In today’s prepared statement, the mayor said, “The reforms will focus on eliminating the deficit, making modern investments and changing the city’s tax structure to make Baltimore more competitive for growth. But before proposing anything, we need to understand the full scope of the problem, and that is why we are outlining the forecast today.”

In September 2011, the city paid PFM $460,942 to provide “professional services” for the development of a 10-year financial forecast, with an option to retain the consultants for two more years after the forecast is completed.

Essentially, PFM found that the city’s revenues will remain stagnant for the next 10 years, while costs, especially for employee health and pension benefits, will grow steadily. 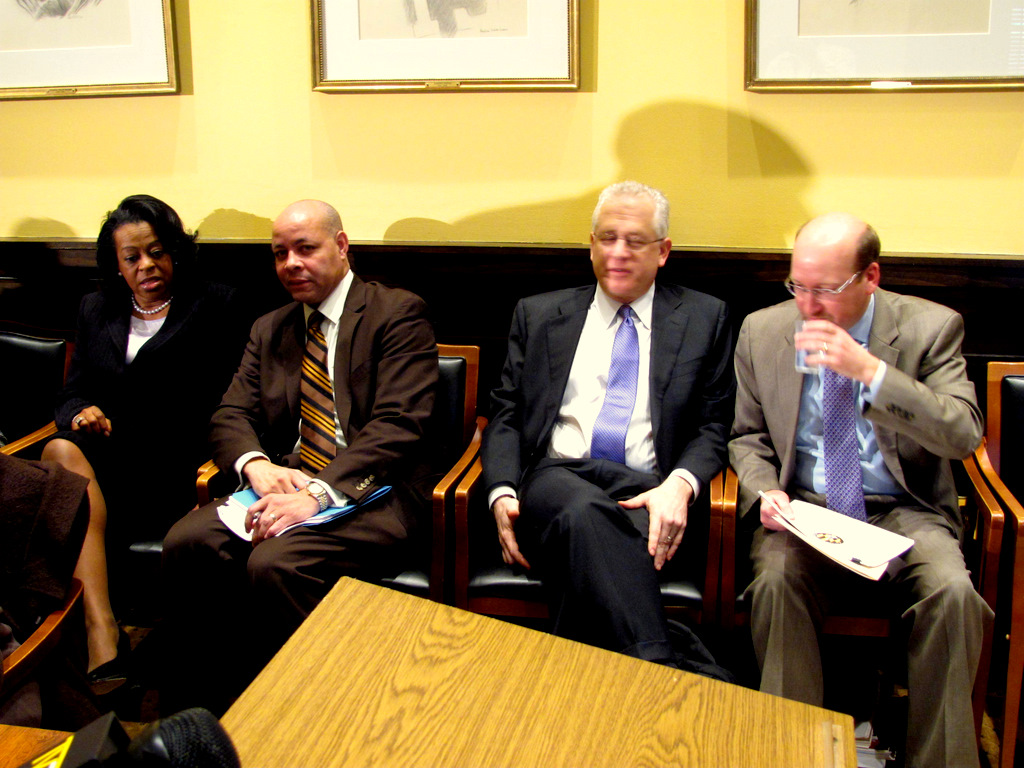 Regarding employee costs, the report described the ongoing litigation with the fire and police unions over retirement benefits “the single largest, most immediate threat to the city’s fiscal stability.”

The retirement plan was changed in 2010, leading to lawsuits by the unions. “If the city’s approach [to changing the pension plans] is not fully upheld by the courts, the city’s recent fiscal progress would be set back dramatically to the severe detriment of the public interest and welfare,” PFM reported.

The consultants projected that Baltimore will have unfunded pension and other retiree liabilities of $3.2 billion by 2022. Currently, the city has 14,000 employees, down from 15,500 four years ago, said Budget Director Andrew Kleine.

The city will also face a $1.1 billion cumulative shortfall in infrastructure spending by 2022, mostly for roads, bridges and municipal building repairs. This figure does not include the $2.5 billion that’s needed to rebuild the city’s “aging schools [that] are now in substandard condition.”

The mayor stressed today that the city could not spend it way out of the projected deficits by raising property taxes. In fact, she said that “new ways to restructure and diversify overall tax policies to reduce the burden on residents” was an important goal of her administration.

Asked if she planned to reevaluate PILOTS and other lucrative tax breaks that her administration has awarded to private developers, Rawlings-Blake said, “I’m not sure about reopening existing deals.”

She said her goal is “how we can use these [tax] incentives to grow the city.”