The girl with the candy corn-colored hair beads speaks in a halting whisper around adults and is hardly the best musician in the ensemble, but she is the first to grab Russell Kirk’s attention when he walks in the room.

And so Morgan Brown gets what many of the children urgently want at this weekly session of the Baltimore Symphony Orchestra’s OrchKids program, held at Lockerman-Bundy Elementary School in one of the city’s toughest neighborhoods – one-on-one time with “Mr. Russell.”

“Look at me!” Kirk says gently to Morgan, whose head is now bowed, shoulders sagging. He points out that she’s only been playing for six months and “that’s not very long and you have done SO MUCH in just that time!”

“You think Jonah was able to play like he does when he was just beginning? (A reference to Jonah, one of the more advanced OrchKids students). I remember Jonah when he sounded like this!” Kirk makes a puffy, bleating sound. Finally, super-serious Morgan smiles. 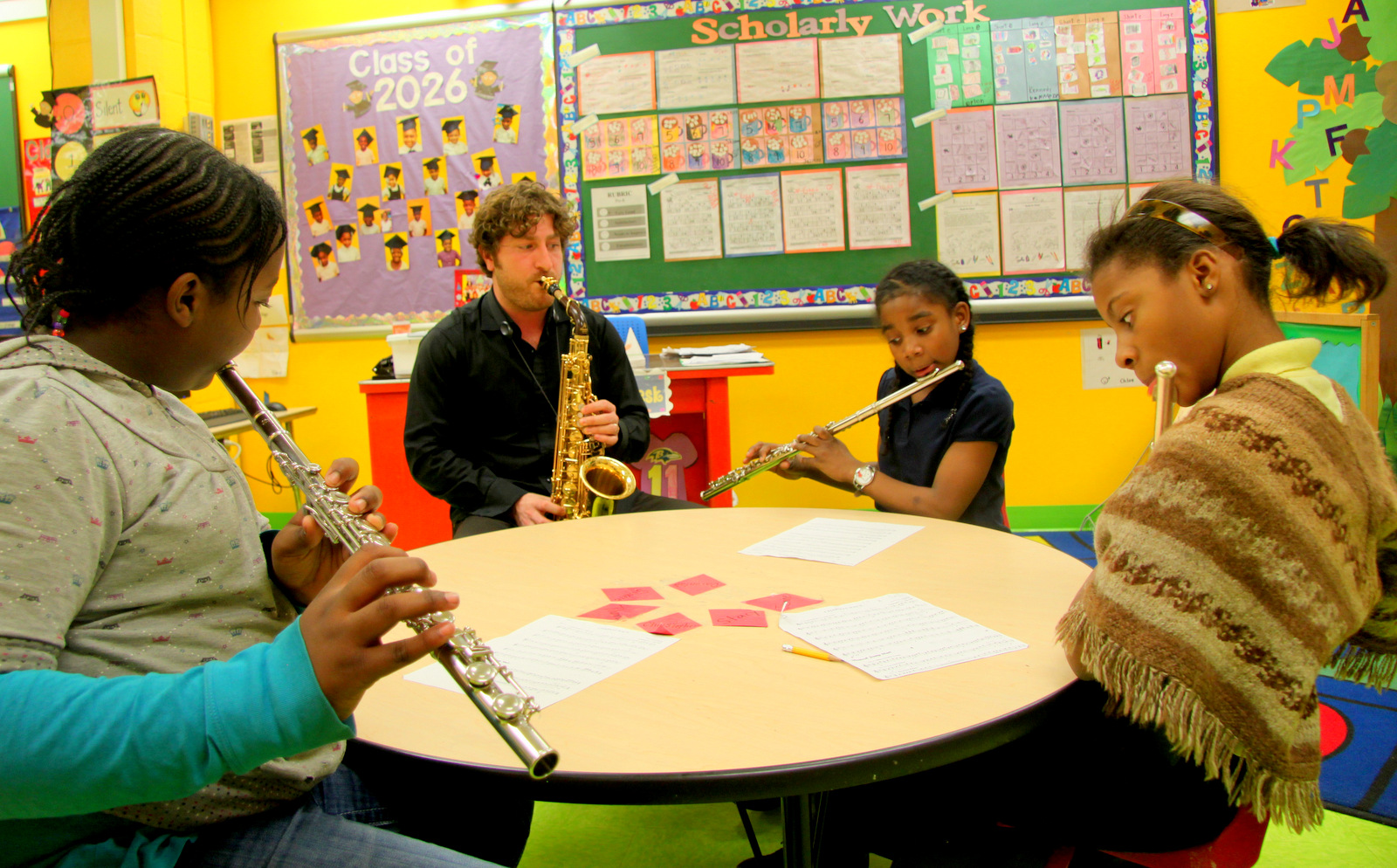 Afterwards, Kirk talks about the experience of teaching Morgan and her fellow student musicians in the four-year-old BSO program. Often, they crack him up with the funny things they say. Other times they hurt his heart, when they let him know the difficult circumstances of their lives outside the safety of the school.

“I am very patient with them. I feel a connection with them. For some of these kids, music is going to save their lives,” Kirk said. “It certainly saved me.”

Kirk, 33, grew up in Northeast Baltimore in Lauraville, with some of his relatives hailing from Highlandtown. He says he was on a rocky path and “most likely going to wind up in some kind of manual labor job.”

Neither of his parents were particularly musically inclined. But in middle school, Kirk took up the alto saxophone (“Maybe I’d seen it in ‘St. Elmo’s Fire’ or Hall & Oates songs”) and participated in the Baltimore School for the Arts TWIGS program. His first big inspiration, though, came from the sax teacher who taught him at his Catholic high school, Al Maniscalco.

Maniscalco took the young Kirk to D.C. jam sessions and opened his eyes to music and the musician’s life. “It’s amazing, at 14, what I got to see,” Kirk says, with a grin. 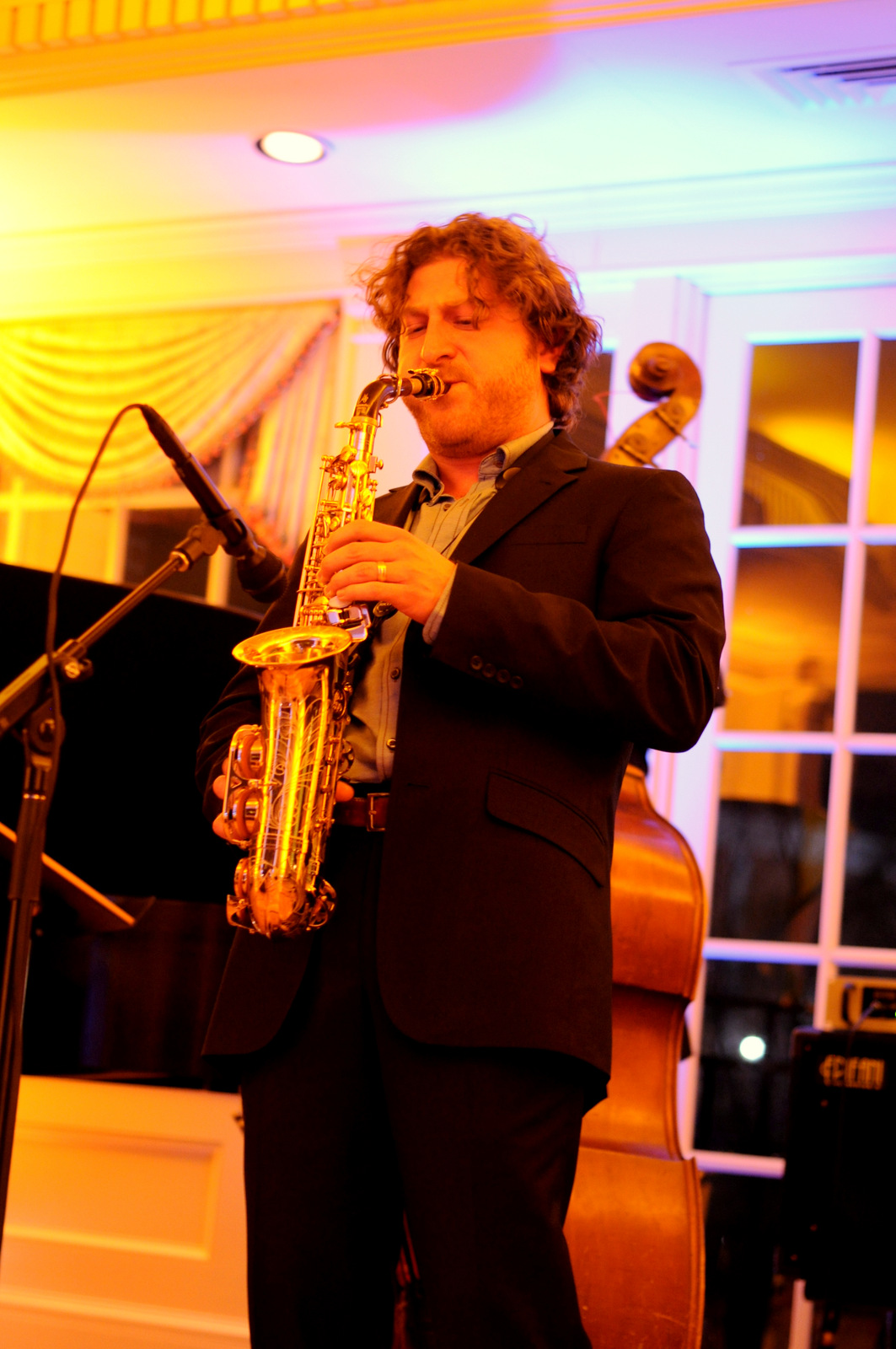 Russell Kirk in a performance with his band in Baltimore last year. (Photo by Ian Simms)

His next mentor was Gary Thomas, of Johns Hopkins’ Peabody Institute of Music, where Kirk went on to get his undergraduate degree.

Then, thanks to a scholarship, he got into a graduate program at New York University. While in the city, he interned at Saturday Night Live and played with such artists as John Scofield, Chris Potter and Lenny Pickett.

Over the course of his career, Kirk has opened for Herbie Hancock and played with a wide variety of big-name artists (Sam Rivers, Michael Formanek, Dennis Chambers, Terri Lyne Carrington, Wayne Krantz, Jill Scott and Gary Thomas, among others) and orchestras (the Baltimore Symphony Orchestra, George Clinton’s Parliament Funkadelic, the Temptations.)

But now as he prepares a tour to promote his second album, Russell Kirk & the Path “To Journal Square, Kirk says the insights he’s gained from teaching students like Morgan are just as important as the lessons he learned from those cutting-edge New York musicians.

“We’re using music to get into her shell, to break through the mold when she can’t let anyone in.” 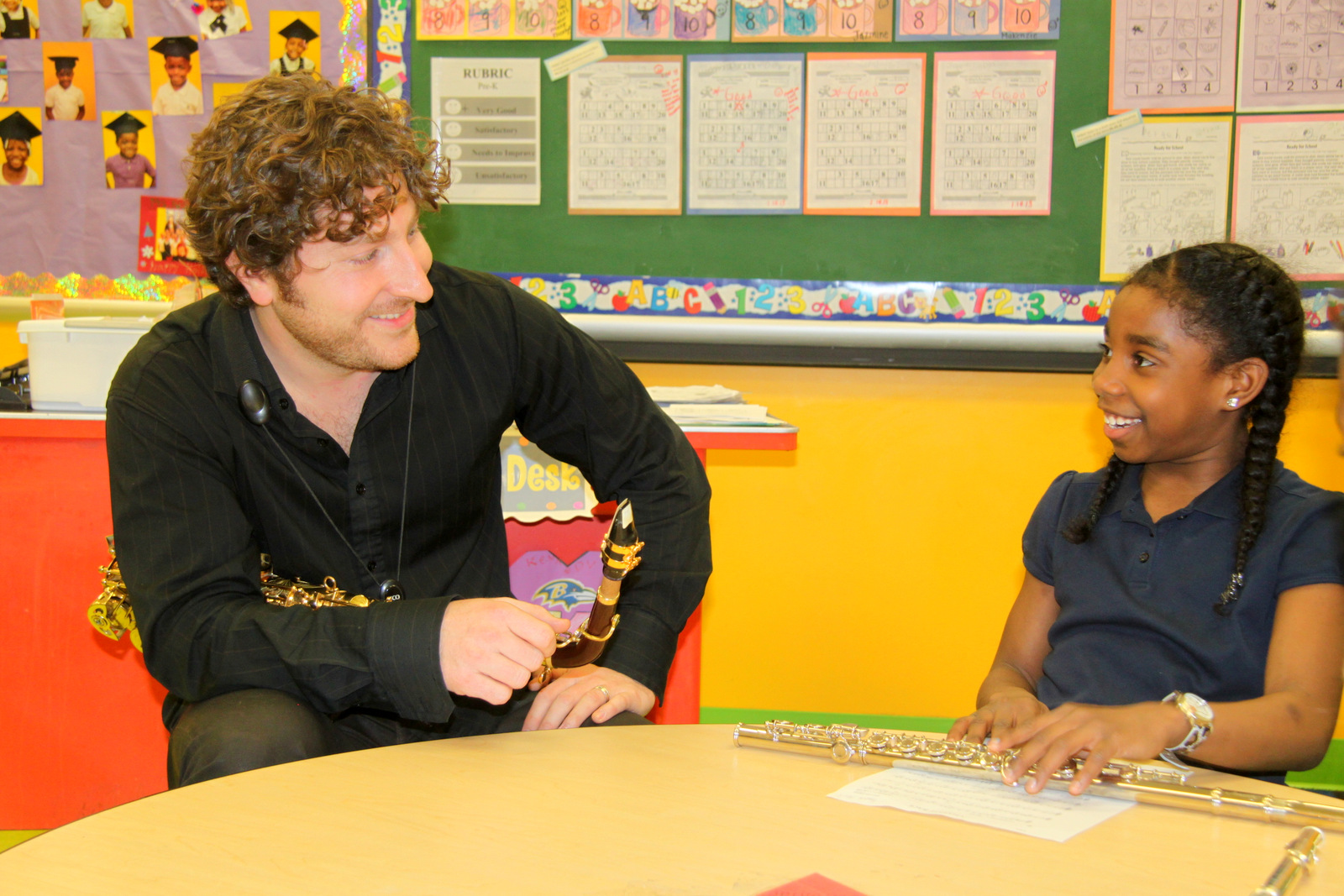 His album’s title, he said, comes from the experience of riding on the PATH train from his Jersey City home to Manhattan, with fellow passengers who came from all over the world. ”

All of them starting with nothing, all of them trying so hard to make it,” he said, just as he and his wife were struggling to find their way, living in New Jersey and working in New York for a couple of years.

Those rides on public transit, surrounded by so much yearning and diversity, put him in the right frame of mind for synthesizing all he’d learned into his own compositions, the artistic vision he wanted to communicate.

These days, with a three-year-old and a six month-old, Kirk and his wife are back in Baltimore, where he’s trying to make a go of it as a recording artist signed to Greg Osby’s Inner Circle label. He pieces together income from things like OrchKids and leading jazz ensembles and teaching private music lessons at area schools.

And he prepares for gigs – like the one with his band this Saturday at An Die Musik – by practicing whenever he can find the time, whether it’s with his band at a fellow performer’s house, by himself in a high school practice room or sitting in on Thursdays with the house band at Bertha’s in Fells Point.

“I get really excited about my music,” he says, explaining that his repertoire “is bebop, with a push toward the more artistic, modern end of that.” Another thing that gets him excited? When his students like Morgan start connecting with the music too.

“She’s got a bark to her. She’s taken to me, she’s more open to me,” he said. “In our last session, I could see she felt something greater. She was motivated.”

After a while, Morgan is hitting her notes right more often but when she doesn’t, she falls off the beat and gets completely derailed, grinding to a halt.

“If you mess up, if you crack the C sharp, just keep going. Don’t let it stop you!” he urges. But Morgan can’t seem to get it. He tries different metaphors. “It’s like a train car,” he says, “the tuba’s behind you, the trumpet’s in front of you. You’ve all got to move together.”

He illustrates with squares of paper on the table. She still can’t get it. Finally, he finds the image: 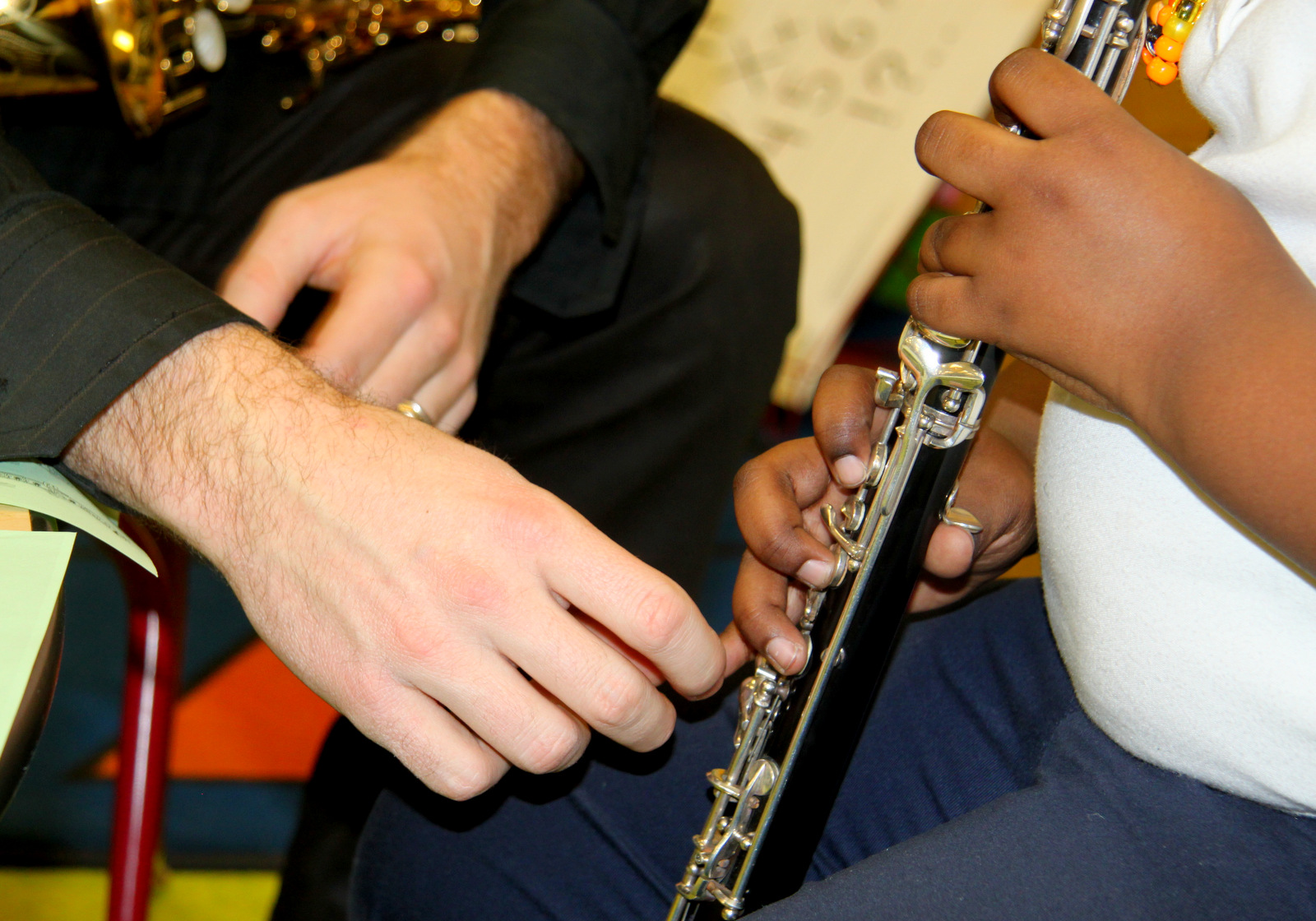 Kirk and Brown work on some issues involving that right pinky. (Photo by Fern Shen)

“There’s this big dude in front of you in the hallway. You’re trying to walk. Your little mistake is like the big dude. What do you do about him?”

“Push him out of the way!” Morgan says, in her biggest voice yet. “Or no, go around him!”

“You’ve got it,” Kirk says, grinning. Morgan nails the passage.

“We’re going to go back into ensemble now and you’ve got to be able to do all that,” he tells her. “Can you do it? You can do it!”