As part of her 10-year financial reform plan, the mayor called on employees to get on a strict diet of “wellness” and to shed (via givebacks in upcoming labor negotiations) some of their cherished health-care benefits.

Here are the mayor’s words that caused the stir: “Our workforce is unhealthy and it is driving up our costs. Nearly 50% of city employees and retirees have critical or chronic illnesses, or are at risk, which is double the rate of the overall CareFirst population.”

“I just want to say that again,” she said standing before the television cameras at the Walters Art Museum. “Nearly 50% of city employees and retirees have critical or chronic illnesses. We cannot reap the benefit of our reforms . . . if we do nothing to improve the health of our employees.”

Where did these figures come from?

“A consultant performed an evaluation of the health of our workforce,” said Ryan O’Doherty, chief of the Mayor’s Office of Policy and Communications. Not having the results in hand after the speech, O’Doherty said he would get back with the answers.

This week he supplied The Brew with a three-page excerpt of what appears to be a 2011 Powerpoint presentation by Hay Group, a Philadelphia-based consultant paid $41,000 for “valuation services” for the city.

The consultant divided up the workforce in year 2010 into active CareFirst city members, retirees non-Medicare, and retirees Medicare primary. The last two categories split the retiree population – plus spouses and dependents – into those 65 or younger and those 65 or older qualifying for Medicare.

Not unexpectedly, the highest incidence of illness (54%) occurred within the over 65 population. On the other hand, 79% of active city employees were reported in good or stable health.

It was by combining retirees with active employees – and by adding “at risk” members to the mix – that the mayor’s office arrived at the almost 50% figure that made local headlines.

How this figure compares to CareFirst’s general population is difficult to determine because the Hay Group does not breakdown the information by the same category. In fact, based on the three-page excerpt, it categorizes 50% of over 65-Medicare members as “healthy” and only 4% with critical illnesses – figures that defy common sense.

When we requested clarification of these figures – as well as a copy of the full Hay study – the mayor’s press office did not respond except to say that the latter would require a Maryland Public Information Act request.

What Happens When the Mayor is Out of Town?

Mayor Rawlings-Blake was out of town much of this week, including all of Wednesday when her office was citing potentially serious consequences for city residents because of predicted heavy snows and high winds.

Even as the city’s Emergency Operations Center was mobilizing, the mayor was on her way to New Orleans to attend seminars sponsored by the Mayors’ Institute on City Design, an offshoot of the U.S. Conference of Mayors which describes its mission as “preparing mayors to be the chief urban designers of their cities.” 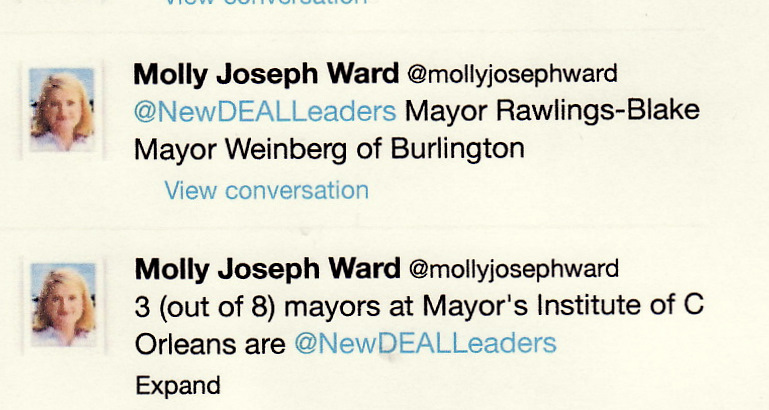 There was a news blackout of the mayor’s whereabouts beginning on Tuesday afternoon on her daily “Media Advisory” schedule distributed to the press.

On Wednesday morning, when she did not attend the weekly Board of Estimates meeting (where much of the informal chitchat was about how much snow was expected), there was no disclosure by the mayor’s office or by Finance Director Harry Black, who sat in her place.

Spokesman Ian Brennan refused after the meeting to say if the mayor was ill or at the emergency operations center or out of town. “She is unavailable,” he repeated.

It was not until today, after various inquiries by The Brew, that her press office sent out a Media Advisory disclosing that she was in New Orleans at the Mayors’ Institute.

All of this made us curious as to who was in charge of the city this week? The City Charter does not provide a set procedure for mayoral absences – though it had been past practice for mayors to designate the City Council President as “ex-officio mayor” in their absence.

Lester Davis, spokesman for the current Council President, Bernard C. “Jack” Young, said the ex-officio designation “is something that hasn’t been utilized in anyone’s recent memory.” He said he was unaware that the mayor was out of town this week and promised to ask his boss if he had been informed of her whereabouts.

As we go to press, that answer hasn’t come back.

Asked this morning in an email if Mayor Rawlings-Blake would have directed city emergency efforts from New Orleans if this week’s storm turned out as dangerous as forecast, her chief of staff, Alexander M. Sanchez, did not respond.

Nor did Ryan O’Doherty except to send out an advisory memo shortly before 11 a.m. that the mayor was spending all day today attending sessions at the Mayors’ Institute in New Orleans.