Word has been circulating among homeless advocates that Baltimore officials plan on Wednesday morning to evict more of the people sleeping under the Jones Falls Expressway – this time the clusters of homeless living in the parking lot near the Hollywood Diner where the Sunday Farmers’ Market is held.

According to Adam Schneider, community relations coordinator at Health Care for the Homeless, this rumored ultimatum was the result of some “confusion” and “crossed wires.”

“The police had told people they would have to move out by Wednesday, but we are now being told this is going to just be routine cleaning that is going to be done on Wednesdays and Fridays,” Schneider said today.

With the farmer’s market resuming this Sunday (April 7), Schneider wasn’t sure whether the city was planning its standard “cleaning” of the homeless encampment – or something new.

“Things are a little different these days,” Schneider said, a reference to the highly public demolition of the homeless encampment near Central Booking known as Camp 83. “I will be very interested to see what happens Wednesday.”

Homeless people have been hearing rumblings about an impending clearing of the camp for weeks, as The Brew reported on March 14.

In its newly issued “Protocol for Dismantling Homeless Encampments,” the city reserves the right to raze any homeless camp that poses potentially dangerous conditions following a “health and safety assessment” by outreach workers.

The city, however, pledges to give advance notice of any clearing to the inhabitants, provide storage bags and a 90-day storage facility for their belongings, and help identify “appropriate short-term placement options” if permanent housing cannot be secured “by the date the encampment is scheduled to be cleared.”

One of the controversies surrounding the razing of Camp 83 was the absence of any shelter for the campers aside from city’s main shelter at 620 Fallsway. (After the intervention of Councilwoman Mary Pat Clarke, the campers were given bed and board by homeless provider Christina Flowers.)

Many homeless complain that the Harry and Jeanette Weinberg Homeless Resource Center, owned by the city and operated by JHR (Jobs, Housing, Recovery), is unsafe. On March 17, Dana Bolden was stabbed to death inside the facility by another homeless person.

We emailed Olivia Farrow, director of the Mayor’s Office of Human Services, and Kate Briddell, head of homeless programs. Here’s an email we received tonight from Farrow:

“DPW is just looking to clean this area in preparation for the resumption of the Farmer’s Market. DPW’s plan for cleaning this area was developed last week with input from Health Care for the Homeless. A handout was created that was shared with people there last Wednesday by outreach teams.

“I understand that DPW will be posting permanent signs to inform newcomers that the area will be cleaned regularly (as is done at St. Vincent Park), so people know they need to move their belongings during posted hours so the site can be cleaned.

“This is merely a routine cleaning as the area is being prepared for use as a food service site. There’s no intention to ‘clear out’ any persons from this area.”

Cleaning up for the Sunday Crowd

The normal routine is familiar to Michael Allen, a 26-year-old homeless man who said he has been living for the past eight months with five other people in the parking lot where the farmers’ market is held under the Jones Falls Expressway.

About 30 peoples’ blankets and possessions (some with the occupants curled up asleep) could be seen this afternoon, just inside the cement wall that forms a sort of corral for metered parking spaces.

One man stood at a bank of electrical sockets and charged his cell phone. Allen’s encampment (“We watch out for each other”) is on the north side of the lot, near Holliday Street. 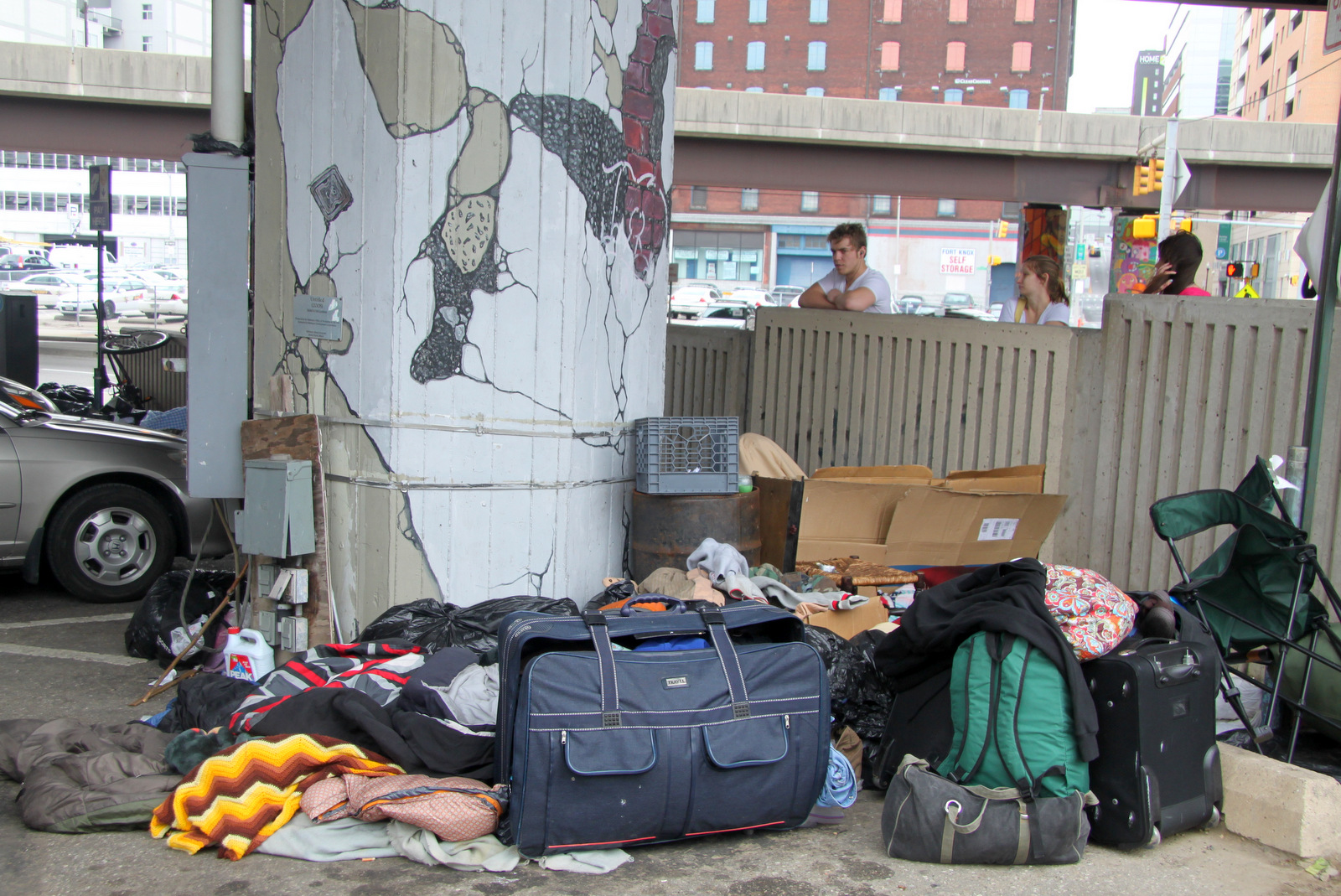 People living in the parking lot say the city typically requires them pick up all of their belongings before the Sunday Farmers’ Market. (Photo by Fern Shen)

Allen said a city truck typically comes through in the wee hours of the morning before market day.

“We have to take all our stuff and move it or else they throw it in the trash,” he said, pointing to battered suitcases, shopping bags, and black plastic trash bags holding his group’s possessions.

“It doesn’t matter whether you have important papers or medicine.”

“They take everything,” he said. “Then they spray it all down with a power washer.”

Originally from Annapolis, Allen said neither of his parents are living and that he has been homeless since he was 14. He said he attends a men’s group meeting at Health Care for the Homeless, does not consider the emergency shelter safe and would like to get a housing voucher.

We also received a call from HCH president Kevin Lindamood who said talks with the city in advance of Farmers Market season produced a plan for “scheduled cleaning” from 5 p.m. to 7 p.m. on Wednesdays and Fridays, with continued “power-washing on Saturday night” followed by power washing immediately after the market.

–Mark Reutter contributed to this story.