Just after 9 a.m. last Friday, men were already streaming into this corner store on Reisterstown Road in Northwest Baltimore to buy cigarettes, lottery tickets and single 24-ounce cans of beer.

Patrons hanging out near the ATM machine teased a young man who was putting $2 into the revolving plexiglass pass-through, to pay for his extra-large beer: “Hey, you’re under-age, getting that thing!”

Block’s Discount Liquors clerk Jason Kim, whose wife has owned the small Park Heights establishment for five years, sighed, hearing about it later: “You do know they were joking, don’t you?”

Kim says their store “absolutely never, ever” sells alcohol or cigarettes to minors: “The fine is, like $600. Why would we risk it?” Warning signs about loitering and under-age purchases compete for wall space with advertisements for “Kinky Liqueur,” “Four Loko” and “Colt 45 Malt Liquor.”

But one rule that Kim acknowledges Block’s Discount does not follow hasn’t really been enforced anywhere in Baltimore for over 40 years – the zoning provision that prohibits such liquor stores in residential areas, making his business technically “non-conforming.” 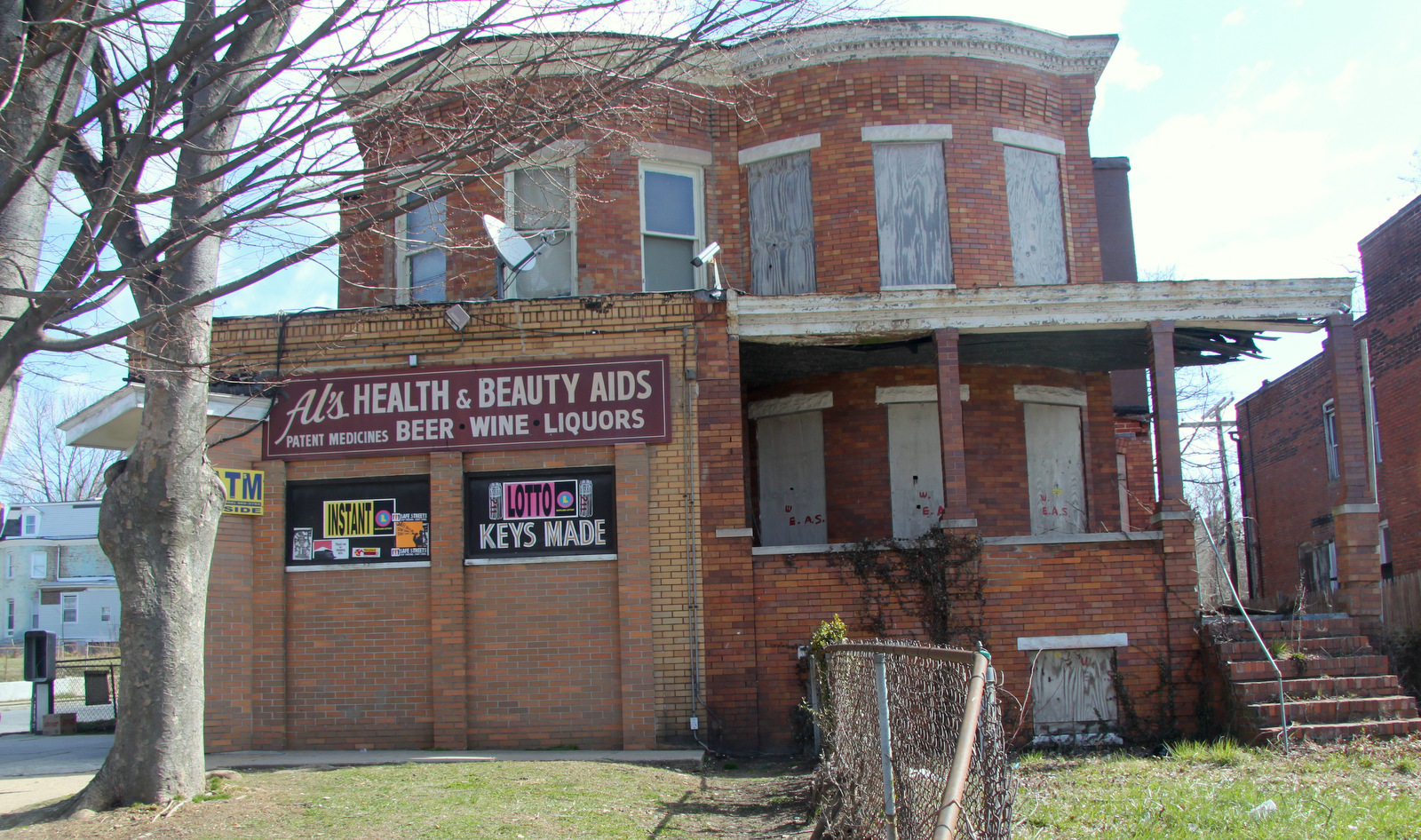 This store in the 3900 block of Park Heights Ave. wouldn’t be able to sell liquor under the proposed zoning code change. (Photo by Fern Shen)

Now, though, the city is revamping its zoning code to require Block’s and more than 100 others to either stop selling alcohol or shut down, saying that an over-concentration of such establishments encourages crime, violence, under-age drinking, unhealthy lifestyles and lower property values. [Here’s LIST of “non-conforming” stores.]

And so the Kims’ store – located as it is in a low-income residential rowhouse neighborhood, near the Dupont Road intersection – is one of those targeted.

“I agree with what the city is doing, somewhat. I get it,” he said, “but my family is going to take a big hit.”

“You Could Get Drunk Practically 24-7”

Block’s is one of six liquor outlets targeted by the city in the Park Heights Master Plan area, out of nearly 40 such establishments located there, according to Julius Colon, president and CEO of  Park Heights Renaissance, Inc. He wishes more of these places were being zoned away.

“He has a good attitude, I sympathize with him,” Colon said, speaking of Kim. “But these stores are just too many here, they are holding back the community, they are so seedy-looking.”

To prove his point, he took a reporter on a driving tour of area liquor outlets, including the more numerous liquor stores and taverns that are not affected by the zoning changes, presumably because they are on clearly commercial blocks of Park Heights Avenue and Reisterstown Road. 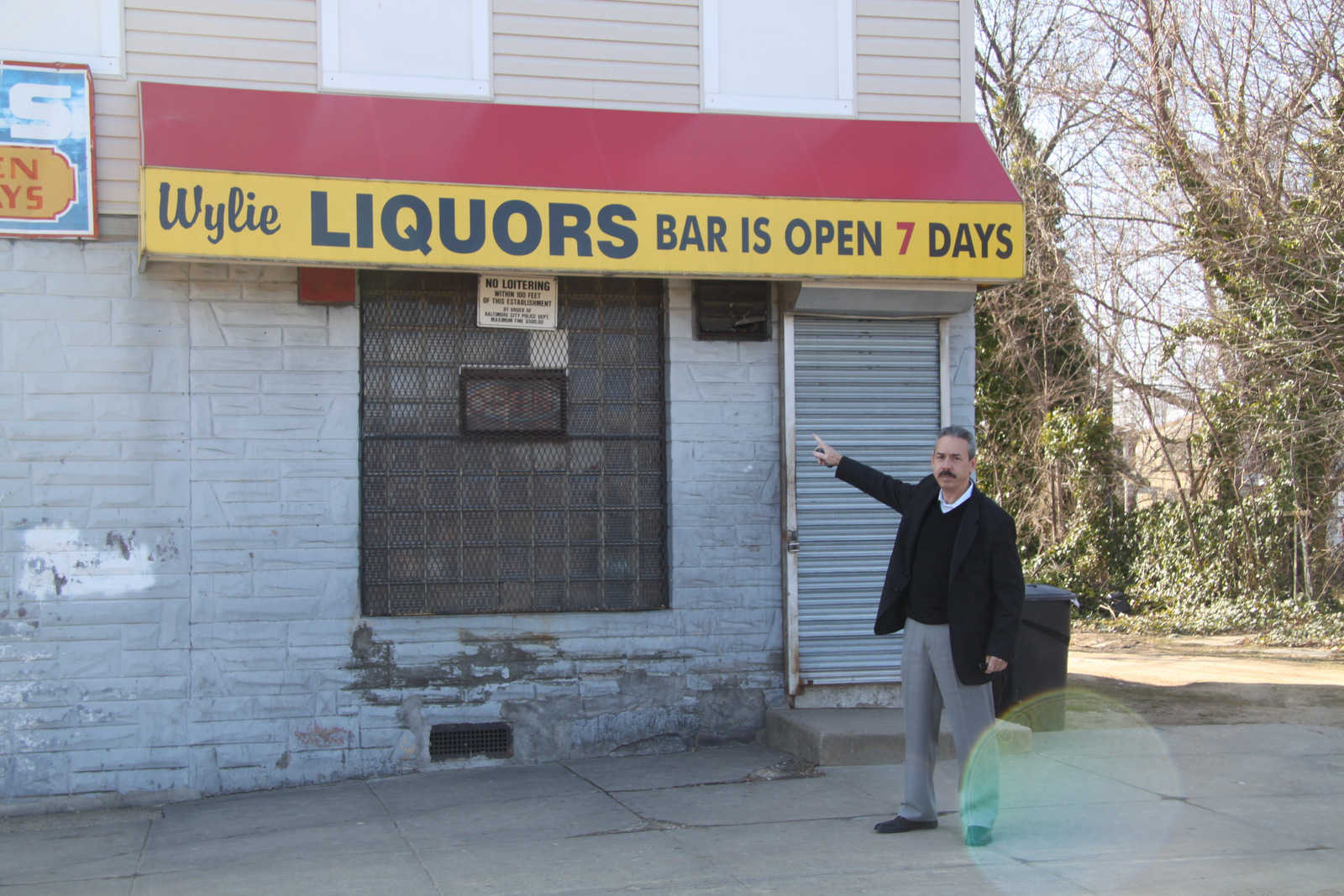 “Look here’s one. One block, two blocks, three blocks here’s another,” he said, cruising past three stores in a four-block area.

Each of them had young men standing around outside by the front door, shortly after 9 a.m.

“See, they’re already getting in position! They let people hang out inside that are dealing drugs. They don’t chase them out,” Colon said.

“At night you should see it around here.”

Colon said his city-supported redevelopment organization “had to fight in Annapolis a few years ago to get the laws changed so that liquor stores couldn’t open at 6 a.m.” They are still allowed to stay open until midnight or 2 a.m., while their counterparts in adjoining communities must close at 9 p.m., he complained.

“It’s been a place where you could get drunk practically 24-7,” he said.

“Lounge” Next to a School

Colon also cruised past the six targeted stores, most of which (like Block’s and like Al’s at 3927 Park Heights Ave.) had boarded-up row-homes next to them.

The front lawn was well-kept in front of Al’s (which advertises “Patent Medicines” and “Health and Beauty Aids” as well as “Beer, Wine and Liquors”). But on the other side of the chain link fence, the lawn in front of the next-door vacant property was covered with dead leaves, plastic bags, big beer bottles and small hard-liquor bottles. 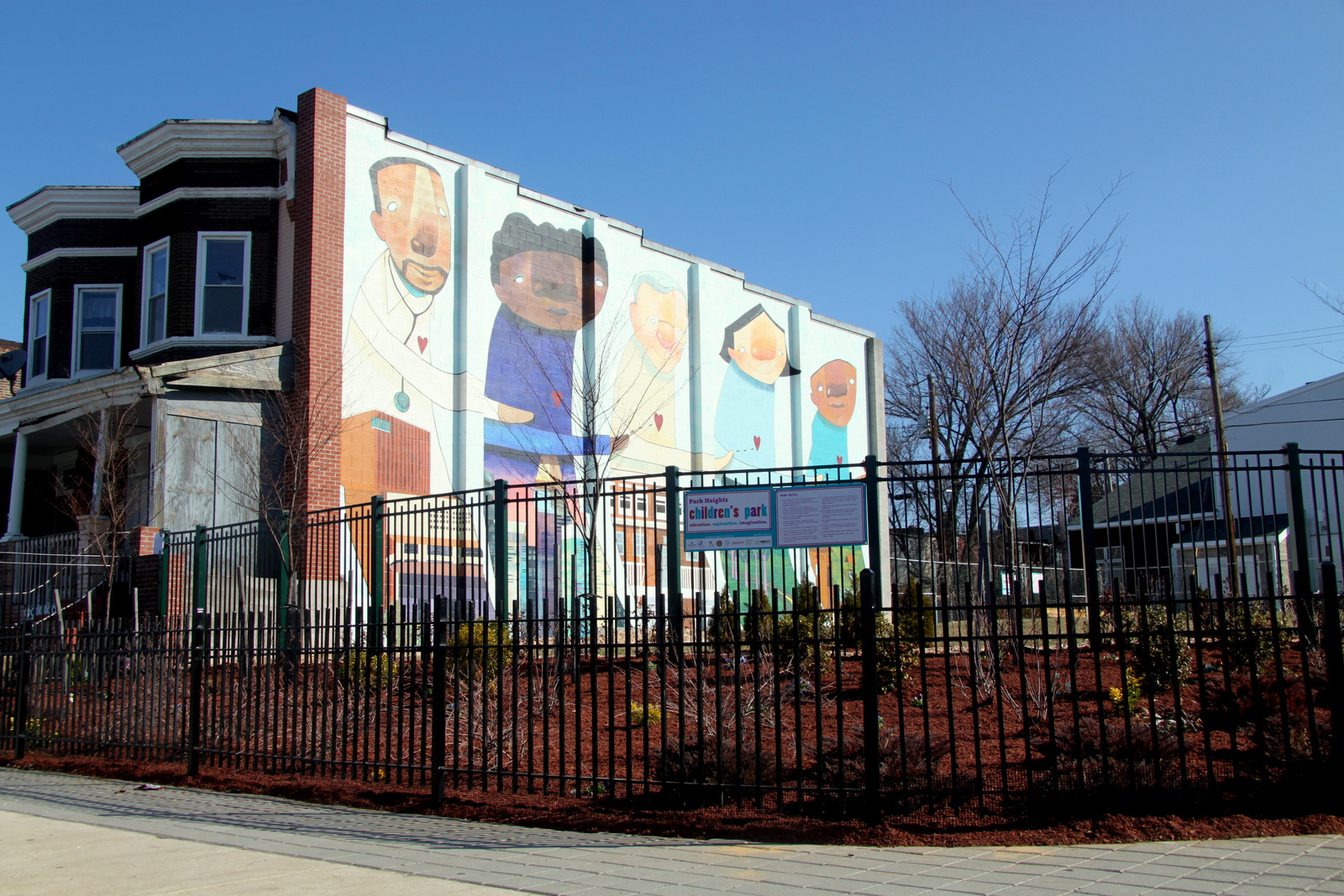 “What do these stores give back to the community?” Colon said.

For Colon, a New Yorker who has headed Park Heights Renaissance for three years, the liquor stores make his mission to redevelop and improve the impoverished 30,000-resident planning area “harder than it needs to be.”

He’s glad, for instance, the city re-zoning has targeted the Pimlico Food Market, a tiny liquor store at the utterly residential corner of Pimlico Road and Loyola Northway.

One of his organization’s projects, Renaissance Gardens, a 60-unit affordable senior housing complex, is under construction just a block or two away. 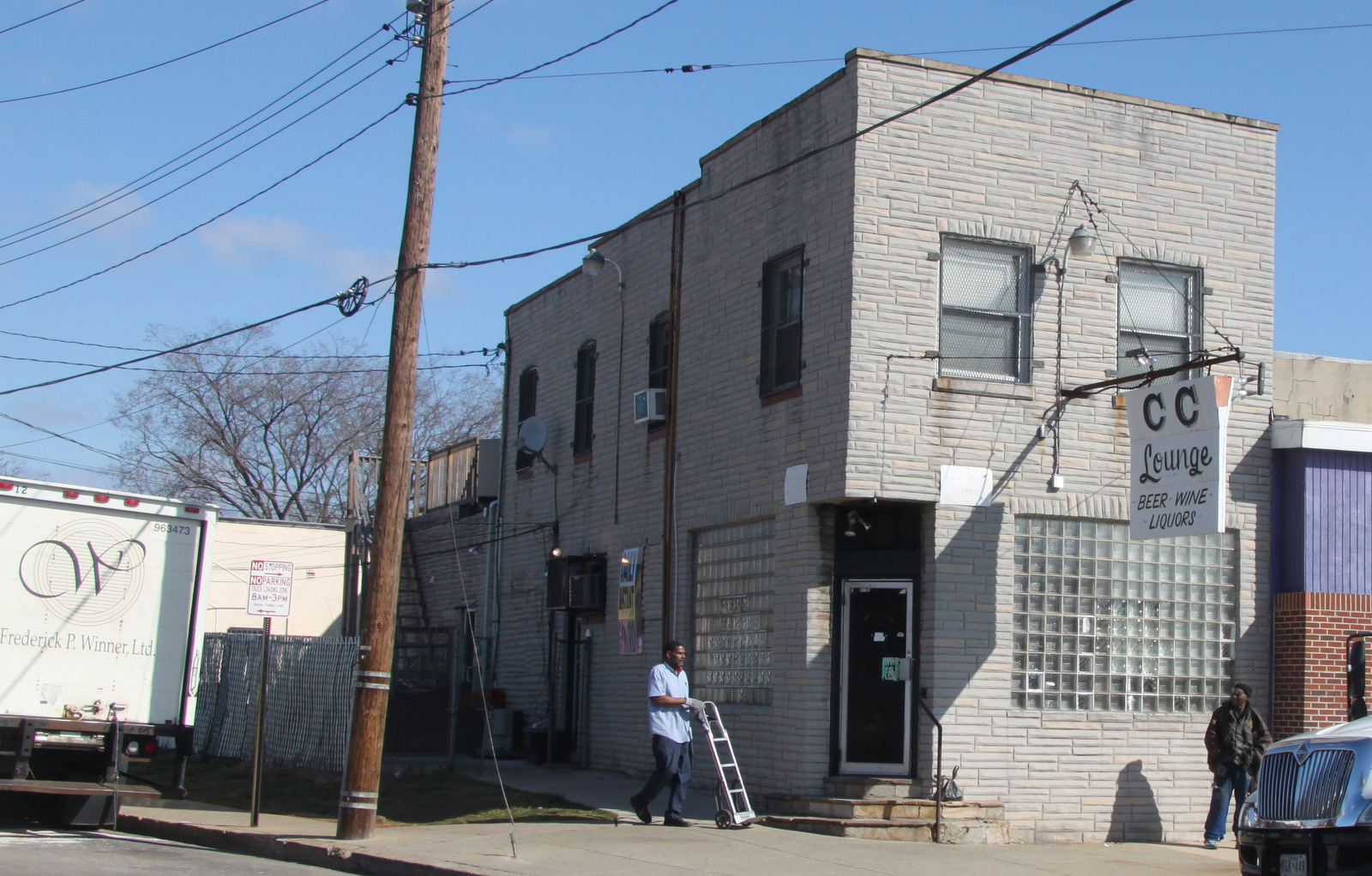 This lounge is across the street from Langston Hughes Elementary School. (Photo by Fern Shen)

But then he points out a store he wishes were on the crack-down list, Wylie’s Liquors, at the Wylie Avenue intersection with Pimlico Road.

Across the street is a big, weedy vacant eminently build-able lot. But it has little potential, he says, since it faces the run-down building with the peeling paint whose sign blares: “BAR IS OPEN 7 DAYS.”

“That right there would kill any re-development I would do in this lot,” he said. “I can’t figure out why it wasn’t on the list.”

Likewise, he’s puzzled by why the re-zoning  hasn’t targeted the CC Lounge, located right across Nelson Street from a school, Langston Hughes Elementary.

Finger-pointing? Or Finding a Fix?

Asked about the argument that stores like his bring the community down, Jason Kim rolls his eyes.

“They can point the finger at anything they want,” he said. “I see all these boys with no jobs and no future, selling drugs to make a buck.”

This cause-and-effect debate has dogged the initiative, with some predicting that the poverty, joblessness and other urban ills plaguing the whole city, but especially West and Northwest Baltimore, would leave the area unchanged after the shut-down of a few liquor outlets. (In 2010, the poverty rate among families with children in southern Park Heights was 36%, according to the Baltimore Neighborhood Indicators Alliance.)

“It would be lovely if this were going to become a nice restaurant,” Colon said, looking one of the targeted liquor stores in a particularly dreary landscape of shuttered row-houses. “But maybe it might become a food store or hardware store. Look, you gotta start somewhere. This is a community that has not advocated for itself.”

At  one point Colon attributed some of the community’s booze-related troubles to lack of enforcement of existing laws by the city Liquor Board: “Until they do their job, we’ve got to go after it this way.”  (His comments came just a few days before a damning audit of the city Liquor Board by the state Office of Legislative Audits.) Generally, though, he views the liquor store crack-down as a logical component in a multi-pronged approach to neighborhood uplift.

“I ask the guys in the Safe Streets program – these are former drug dealers, former gang bangers – where is the worst violence, the dealing? What’s the best way to help this community? And they tell me, ‘Go after those,’” said Colon, adding that residents and police say the same.

“We Took a Big Risk”

With Koreans owning almost all of the targeted liquor stores, their merchants’ association has banded together to retain lawyers to help them stop the rezoning or at least get more financial compensation for merchants’ losses. But Kim doubts they will get anywhere.

“I understand about eminent domain. I can see clearly that they don’t have enough money to make everyone happy,” he said. “Somebody has to be the loser.” If the rezoning kicks in on schedule in two years, Kim says he will lose pretty big. 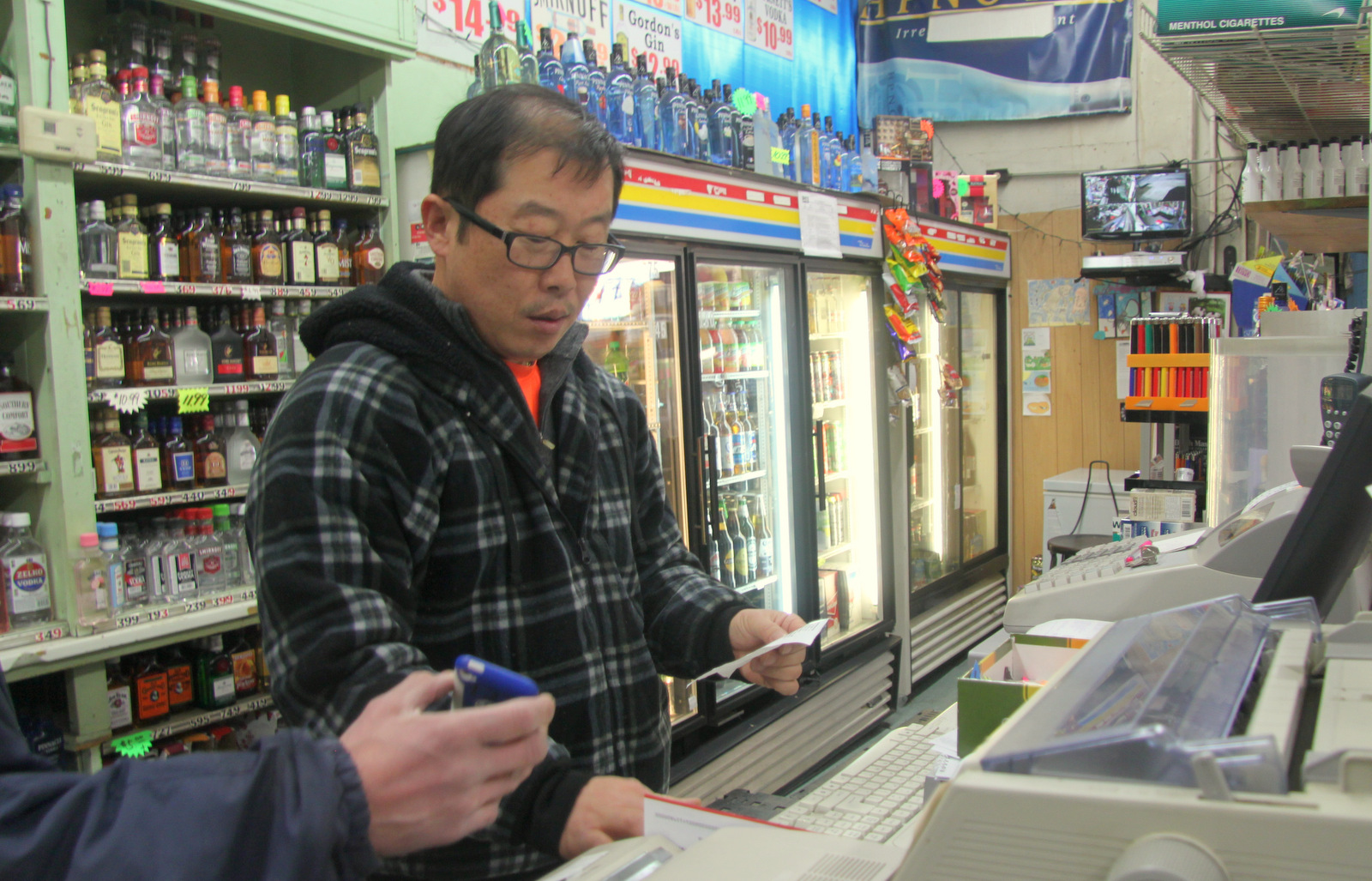 Jason Kim of Block’s Liquors: “I see all these boys with no jobs.” (Photo by Fern Shen)

His father came to Baltimore in 1987 and the family got into business buying properties and stores, including the Linden Market which the Kims own in Reservoir Hill.

Jason Kim, 47, with two kids in college, got into selling real estate and insurance.

“But our family took a big hit when the [housing] market went south, we lost properties. My wife had a heart attack,” he said.

“We took a big risk coming here.” Maybe, he said, the rezoning will take more than four or five years to go into effect: “I’m going to pray.”

Asked about his decision to buy Block’s in the first place, Kim said, “Maybe I made a wrong choice. But I feel like I’m on a train now and I can’t get off.”