Neighborhood activist Kim Trueheart yesterday commenced a one-woman protest against Rite Aid Pharmacy, positioning herself outside the chain’s store at 3804 Liberty Heights Avenue with a home-made sign and a pitch:

“Sir, please don’t go in there. Don’t give these people your money,” she said, going on to explain the purpose of the boycott.

Rite Aid owns a restrictive covenant on a now-city-owned parcel that is part of the planned ShopRite Supermarket 10 blocks to the north.

Rite Aid has demanded $600,000 from the city to release the covenant. The city has made a counteroffer of $15,000 and taken other recent action.

An Oasis in a Food Desert

Like many other residents of  this struggling part of northwest Baltimore, Trueheart sees a new supermarket as central to brightening the area’s prospects and providing a place to shop for fresh fruit and produce in a “food desert.” 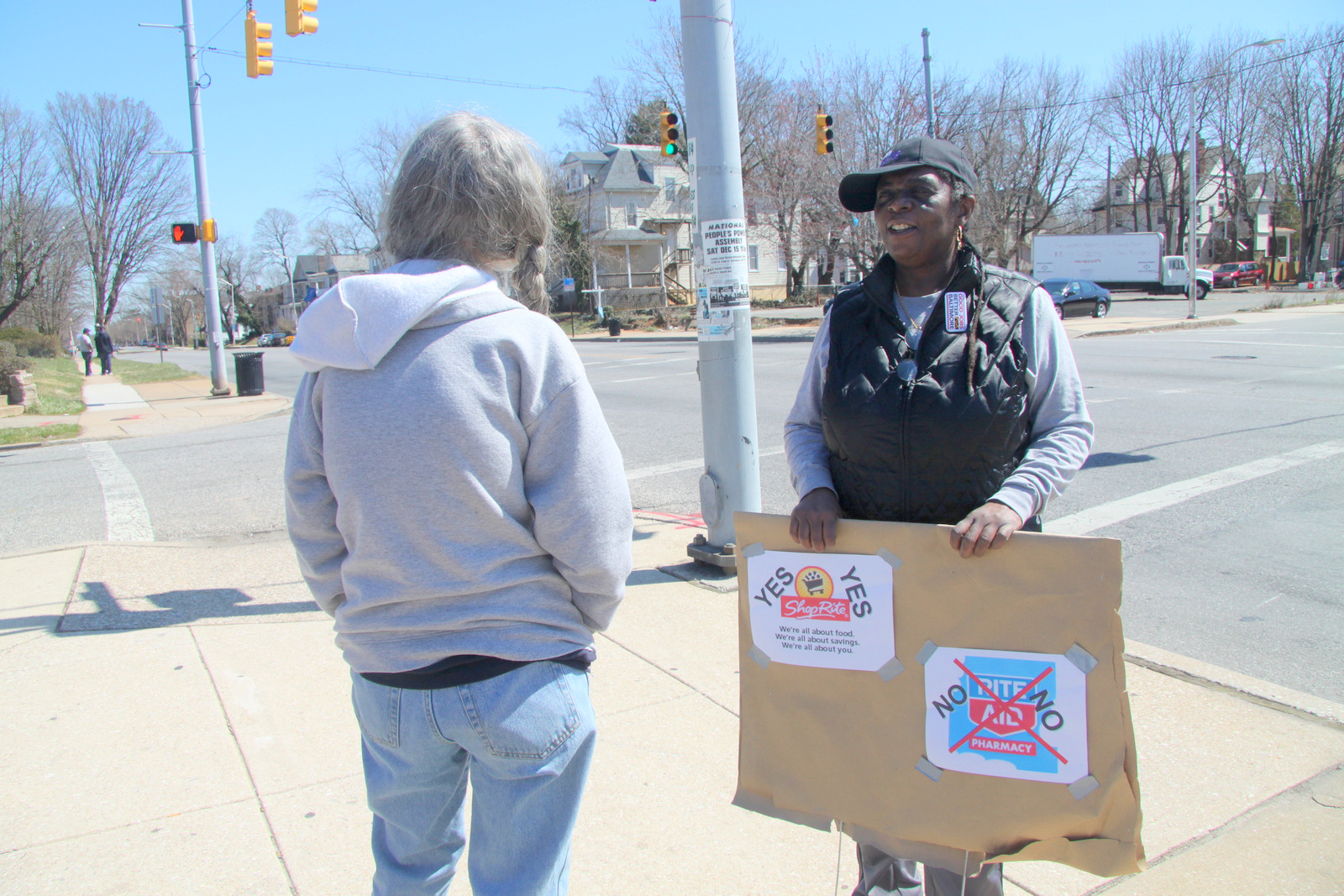 Trueheart (right), with a supporter outside the Rite Aid, where she was protesting the company’s stance in negotiations over a restrictive covenant.

The project has been a community priority for more than a decade, following the closing of a Super Pride market in 1999.

The city has so far spent more than $5 million buying property for the proposed supermarket and clearing the land at Liberty Heights, Gwynn Oak and Hillsdale avenues.

The discovery of the troublesome covenant and negotiations between Rite Aid and the city over it have continued for months – in Trueheart’s eyes dragging on far too long.

“Yes, I am getting impatient. They originally said there would be a grand opening in the fall of 2013. That is obviously not happening,” she said. “It’s outrageous, their position. To me, $15,000 seems pretty fair. Nothing in this neighborhood is worth $600,000.”

Trueheart said that she is also “offended” that the Pennsylvania-based chain “is dictating what amenities we have in our supermarket.” (The covenant would prohibit ShopRite from having a pharmacy at that location.)

Clerks inside the store declined to comment yesterday. Rite Aid senior manager for public relations, Ashley Flower, reached by phone, said she would do her best over the weekend to track down a company response.

The company previously told The Brew via email: “We are in negotiations with the city concerning this matter and hope to reach a solution that will be fair to all parties.” Company spokeswoman Flower, in a statement sent today via email, said pretty much the same as before: “We remain in negotiations with the city and are actively working to resolve the matter in a fair and equitable manner.”

“I’ve Been Waiting for the Market”

Interviewed in mid-afternoon after she had been on the sidewalk outside the store for several hours, Trueheart estimated that she had spoken with about 40 people and persuaded about a quarter of them to go to the Walgreen’s across the street or to just leave.

“I live in that area. I’ve been waiting for that market,” said Nannie Millings, of Norwood Avenue, speaking of the planned Howard Park ShopRite. After speaking with Trueheart, Millings changed course and headed for the Walgreen’s.

Trueheart pointed to a Baltimore city police car driving slowly out of the Rite Aid parking lot and said there had been five police officers at the spot at one point. There had been discussion of where she could stand, whether she could be on the sidewalk in front. By late afternoon she was on the sidewalk of the side-street, Ayrdale  Avenue.

At one point, she said, there were three other people joining her protest –”all of a us 50-plus year-old women.” Another woman who read about it online joined yesterday.

Trueheart said she plans to be outside the store again today. “I’m looking for a May 1 groundbreaking,” she said. “That’s what they had been talking about and that’s what I’m hoping to see.” 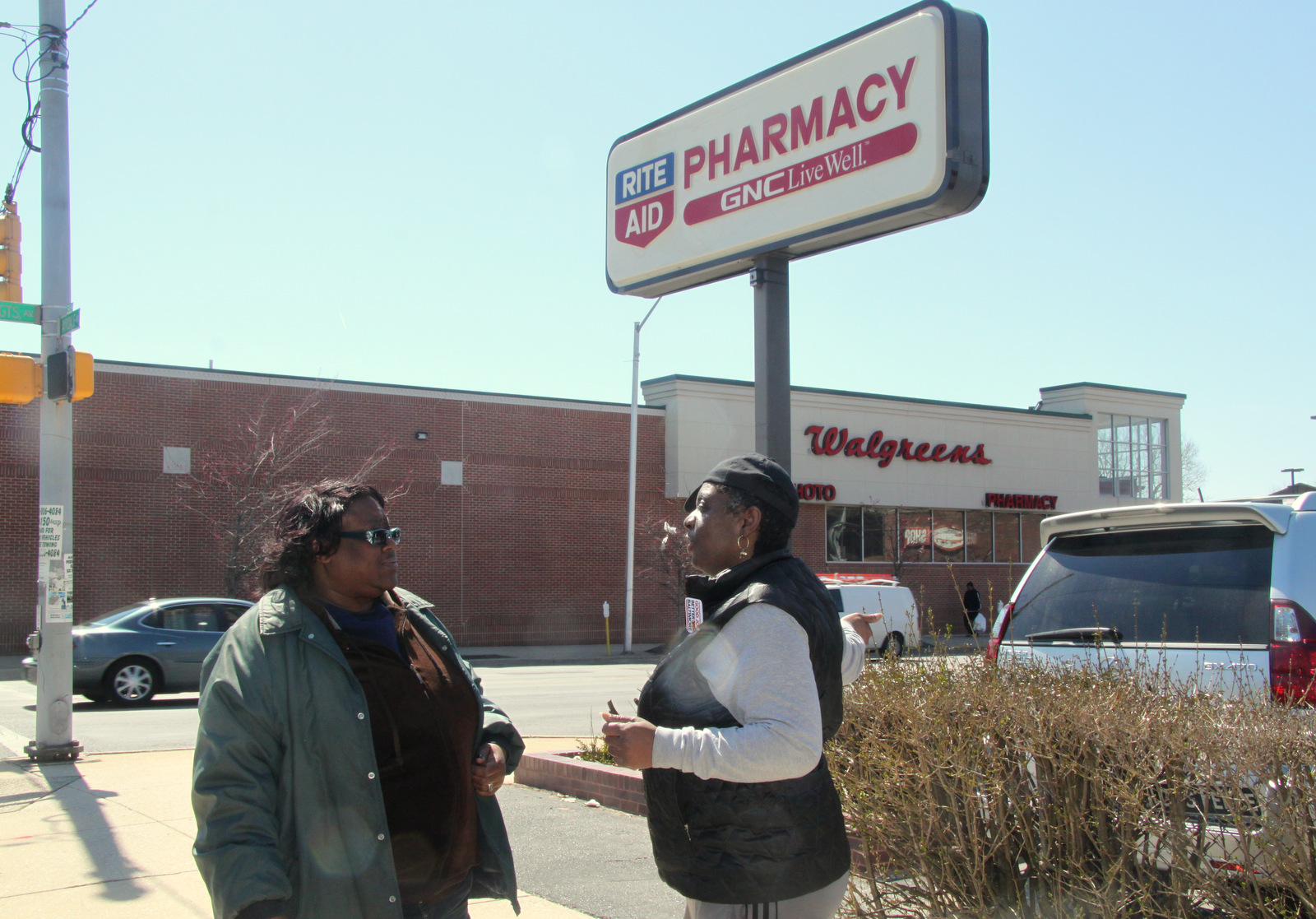