Rite Aid has dropped its demand for a large financial settlement from the city and agreed to release a restrictive covenant that has held up construction of a new grocery store in Howard Park for more than a year.

Confirming that a deal had been struck between the city and the pharmacy chain this afternoon, City Solicitor George Nilson told The Brew: “They will make the [deed] modification without financial compensation by the city.”

Asked why they dropped their longstanding monetary demands, Nilson said, “I think they believed it was better for them to be good corporate citizens in the eyes of the community and the city than continue their position.”

The Brew has reported extensively on the issue that has stalled a city-sponsored and subsidized ShopRite Supermarket at Liberty Heights, Hillsdale and Gwynn Oak avenues.

Originally Rite Aid demanded $600,000 to drop the restrictive covenant on a parcel of the land slated for the new market.

Last Friday, sources told The Brew, the company privately threatened to file suit against the city to stop construction of the proposed ShopRite, sources said.

On Monday, a boycott of all 44 RiteAid stores in Baltimore was declared by the Howard Park Civic Association, and a rally was planned at noon on Saturday at Rite Aid’s nearby outlet on the 3800 block of Liberty Heights Avenue. 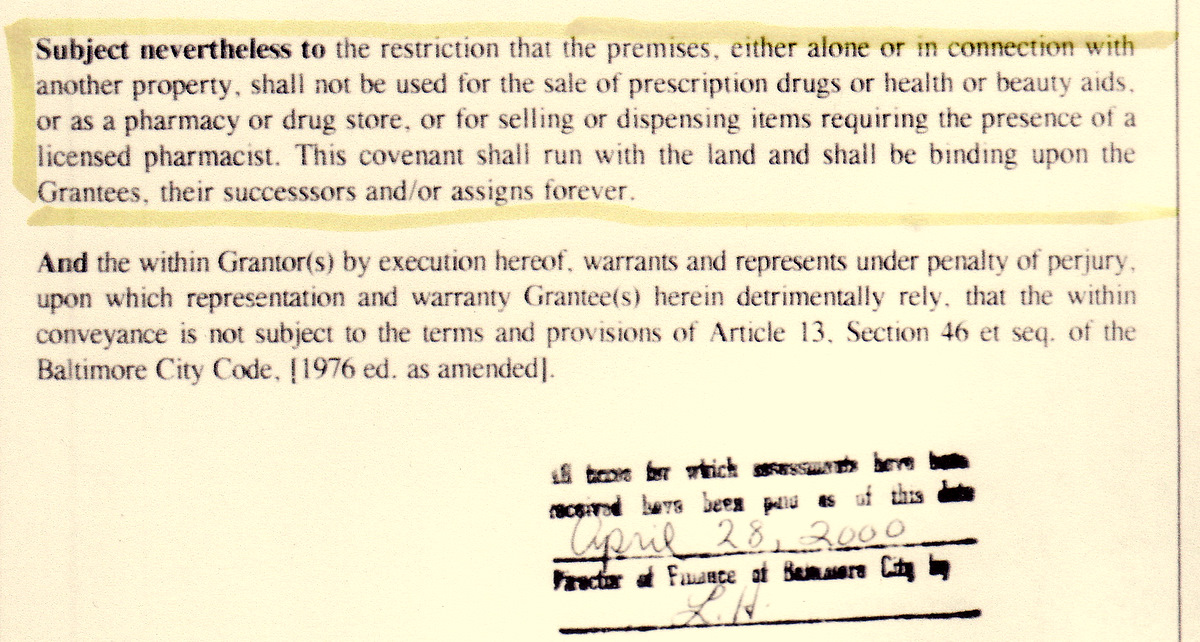 Copy of the original restrictive covenant inserted by RiteAid in 2000 that has caused so much grief for Howard Park. (MDLandRec.net)

“We’re very pleased,” said Preston Greene, president of the the Howard Park Civic Association, reached this afternoon. “We’ve had a simple mantra in this issue, namely that the community has been held hostage by the covenant.”

One of Many Delays

“This has been the back end of a long, long delay in getting a grocery store into a food desert. We want people to know that we are not anti-business but pro-community.” Greene said.

Greene said the boycott of Rite Aid stores will end. The community association’s board will decide whether to hold Saturday’s scheduled rally, but Greene said he believed it will take place as a “victory” rally. “Our theme will be, Rite Aid has seen the error of their ways and we welcome that.”

Nilson said the restrictive covenant was made in 2000 when Rite Aid sold its property at Gywnn Oak and Liberty Heights avenues to a tennis shoe merchant. The covenant, barring a pharmacy or beauty supply store on the premises “forever,” was never expunged when the city purchased the property in 2009 for $1.1 million.

According to Greene, the city “forgot about” the covenant until the prospective buyer of the land, Klein’s ShopRite, said that it could not get financing for the supermarket until the covenant was lifted.

Thus, began a year-long battle between the pharmacy chain and the city, with Greene, Truehart and other Howard Park citizens looking on with a growing sense of anger.

Reached this afternoon, Trueheart said, “You’re kidding! This is wonderful! I think they [Rite Aid] made the wisest decision possible. I’m glad it’s happening before Saturday.”

Trueheart added, “It would be wonderful if they would make a public statement saying they are really in support of our supermarket and that they want us to be as healthy as possible. . . I guess this is what a one-woman campaign can do.”

A RiteAid spokeswoman sent us this statement:

“Rite Aid has reached an agreement with the city of Baltimore regarding the restrictive covenant issue in Howard Park.

“Rite Aid sincerely appreciates the Howard Park community’s desire for a supermarket, and in fact, the company has never been opposed to a supermarket in Howard Park. Rite Aid’s sole interest in this matter has been to protect and support its core business – pharmacy – as the company’s closest store is located less than a mile from the property on which Rite Aid holds a restrictive covenant. These types of covenants are not uncommon among retailers. They are valid and legally enforceable.

“Rite Aid is proud of its long-standing relationship with the city of Baltimore and its residents. In keeping with our commitment to the community and with the best interest of the neighborhood in mind, our executive management team held discussions with city officials earlier this week. As a result of those discussions, Rite Aid agreed to modify the restrictive covenant it holds so that a supermarket with a pharmacy can operate at this location. Rite Aid did so at no cost to the city.

“As the leading drugstore chain in Baltimore, operating nearly 30 stores citywide, we’ve had a presence in the Howard Park neighborhood for 35 years. We have continuously operated our Liberty Heights Avenue store since 1977. The store expanded in 1995 and was remodeled in 2004, to ensure we continued to meet the health and wellness needs of the local community. Rite Aid remains committed to serving the health and wellness needs of its Howard Park customers, and looks forward to doing so in the future.”

The city also had a statement:

“The City of Baltimore understands Rite Aid’s business interests and responsibilities, and very much appreciates Rite Aid’s long-standing commitment to the community and its residents—most recently evidenced by this agreement,” said Mayor Rawlings-Blake, in an emailed statement sent by her spokesman Ryan O’Doherty.

The email suggests that the mayor was involved in getting Rite Aid to relent.

“Rite Aid, in recognition of the community’s need for a full-service supermarket that includes a pharmacy, and at the request of the mayor, has agreed to waive that restriction,” O’Doherty’s email says. Here’s the full text of his emailed press release, including the mayoral comment.