In February 1967, a few concerned residents of Fells Point banded together to challenge the merits of an eight-lane elevated highway bisecting southeast Baltimore.

Their activism so infuriated then-City Councilman William Donald Schaefer that he cut short a public hearing and, three months later, rammed through an ordinance condemning hundreds of homes.

But the citizens persisted and, a decade later, Mayor Schaefer agreed to halt the “East-West Expressway” through Fells Point and Canton, kicking off the area’s stunning success story of rejuvenated communities.

In recent months, a group of citizens have come together to offer alternatives to the Red Line, a $2.5 billion transit project whose route is uncannily similar to the banished expressway.

Calling themselves the “Right Rail Coalition” (a pun on “light rail,” the term used by the Maryland Transit Administration to describe the Red Line), the group is led by several Canton residents, a high-powered lawyer and a veteran of the expressway fight.

The group is calling for a streetcar network, running on city roads, to replace the eastern leg of the Red Line – a plan that follows the streetcar-building programs underway in Washington, D.C., and other cities.

Their proposal has won the backing of state Senator William C. “Bill” Ferguson IV (46th district), who calls the streetcar concept “a real advance” over the current alignment of the Red Line and says he plans to mount a campaign to educate the public about its merits. 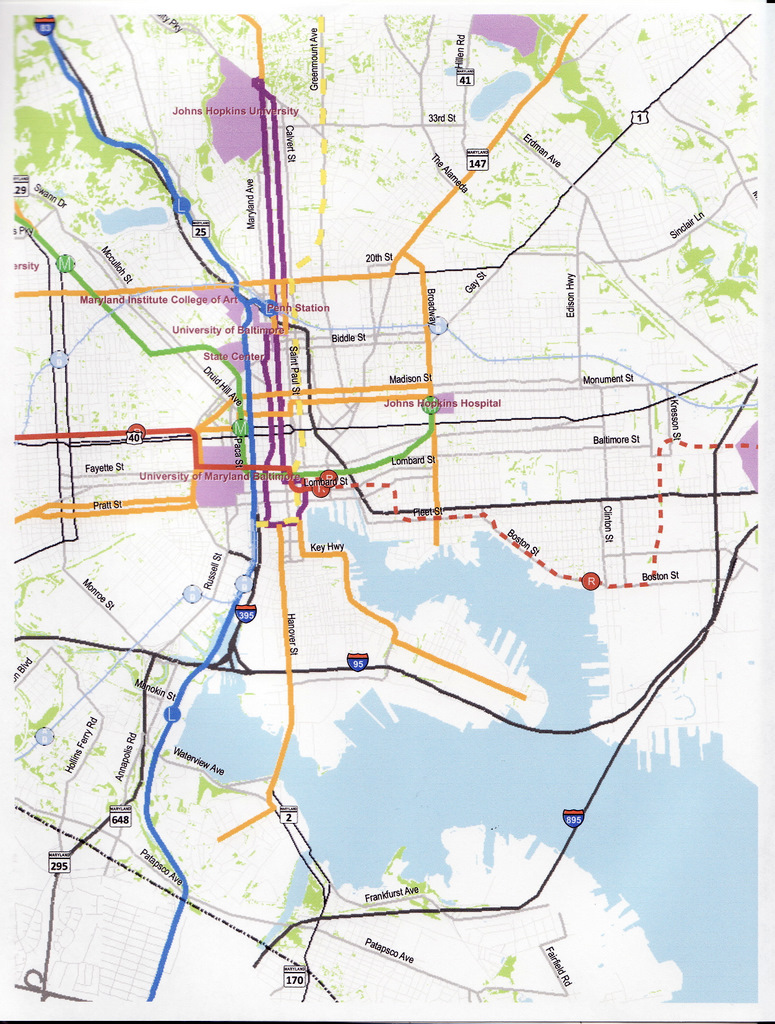 Even though it’s been talked about for years, the Red Line – the biggest public works project in Baltimore’s history – is still in an early phase of development.

So far, only about 20% of the design work has been completed. Actual construction is contingent on the availability of federal New Starts transit funds (that may not materialize) and matching state funds, which may not be enough despite the gas tax increase passed by the General Assembly last month.

Given these imponderables – and the sense by some politicians in Annapolis and Baltimore that the Red Line has grown too costly – the streetcar idea is gaining traction.

In opposing the Red Line’s route through Canton, the Right Rail Coalition says they are not NIMBY’s trying to derail the project because it may run (literally in some cases) through their back yards.

“We’re not a killer of the Red Line. We simply want to open a discussion that never happened,” says Marty S. Taylor, a Johns Hopkins MD/PhD candidate and president of a Boston Street condo association.

Current route of the proposed 14.1-mile Red Line between Woodlawn and Bayview. (MTA)

“The political leadership imposed the Red Line on the city,” adds Ben Rosenberg, founder of the Rosenberg Martin Greenberg law group who doubles as a Right Rail activist. “It’s a big, big plan. It will absorb all of the city’s transit funds for the next decade. But is it cost effective?”

Rosenberg and Taylor say the situation is nuanced. The line’s west end, planned from the University of Maryland’s downtown campus to Woodlawn in Baltimore County, has merits as both a transportation and development tool.

“It makes sense because it will go through a section that has depopulated in part because of the ‘highway to nowhere,’” Rosenberg said, referring to the only segment of the East-West Expressway that was completed along Franklin and Mulberry streets.

Rail Right member Art Cohen says the Westside line would serve a community that was uprooted by the expressway and provide environmental and social “justice” as required by federal law.

A prominent opponent of the East-West Expressway in the 1970s, Cohen recently wrote a 62-page analysis and critique of the Red Line’s eastern alignment. He is the founder and convenor of the transportation website, b’more mobile.

Cohen, Rosenberg and other coalition members argue that the tunneled section, starting near UMB and emerging at the American Can Company retail complex in Canton, is fundamentally misconceived.

“We’d love to have mass transit improvements in East Baltimore, but putting a railroad down Boston Street is not the way to do it,” Rosenberg argued. “And for goodness sake, let’s not build a parallel tunnel through downtown.”

The four-mile-long tunnel with five underground stations – which could cost as much as $1.2 billion, according to the coalition – would parallel the existing Metro Subway through downtown.

“A study shows that the Metro is only running at 11% of capacity. So why in the world would you build another tunnel 600 feet away?” asks Rosenberg.

A Giant Hole on Boston Street

East of downtown, the Red Line would tunnel through Fells Point before emerging at Boston Street near Montford Avenue and Hudson Street. The line’s resurfacing is a huge problem, according to the coalition as well as state Senator Ferguson.

An artist’s rendition of the Red Line emerging from tunnel on Boston Street. (MTA)

The MTA’s proposed “transition” of the line from 60 feet below ground to the surface was “the come-to-Jesus moment for us,” said Maris St. Cyr, a Right Rail founding member.

Residents of the upscale townhouses and condos along Boston Street were told that a giant hole, more than 500 feet long, would be built between Montford Avenue and the Safeway parking lot to raise the line to street level.

The MTA estimated that Boston Street would undergo “heavy construction” for up to 2½ years.

The project would either require the closing of the thoroughfare for long periods – with traffic diverted through the side streets of Canton – or a temporary bypass through a parking area owned by the Anchorage Townhomes and extending past the Anchorage Tower.

The news caused an uproar among Boston Street residents, who immediately began phoning local elected officials to complain. The movement to redirect the alignment has since gathered momentum, according to Rosenberg, as more people read the MTA’s reports and other documentation on the Red Line.

One such reader was Senator Ferguson.

“I still believe the Red Line can serve as a stimulus for better transit for Baltimore,” Ferguson said in an interview yesterday. “But I am less convinced that the project’s current alignment and mode are the most optimal choices. I’m concerned that the MTA and city have not fully explored how best to leverage mass transit funds for the most cost-effective and efficient system.” 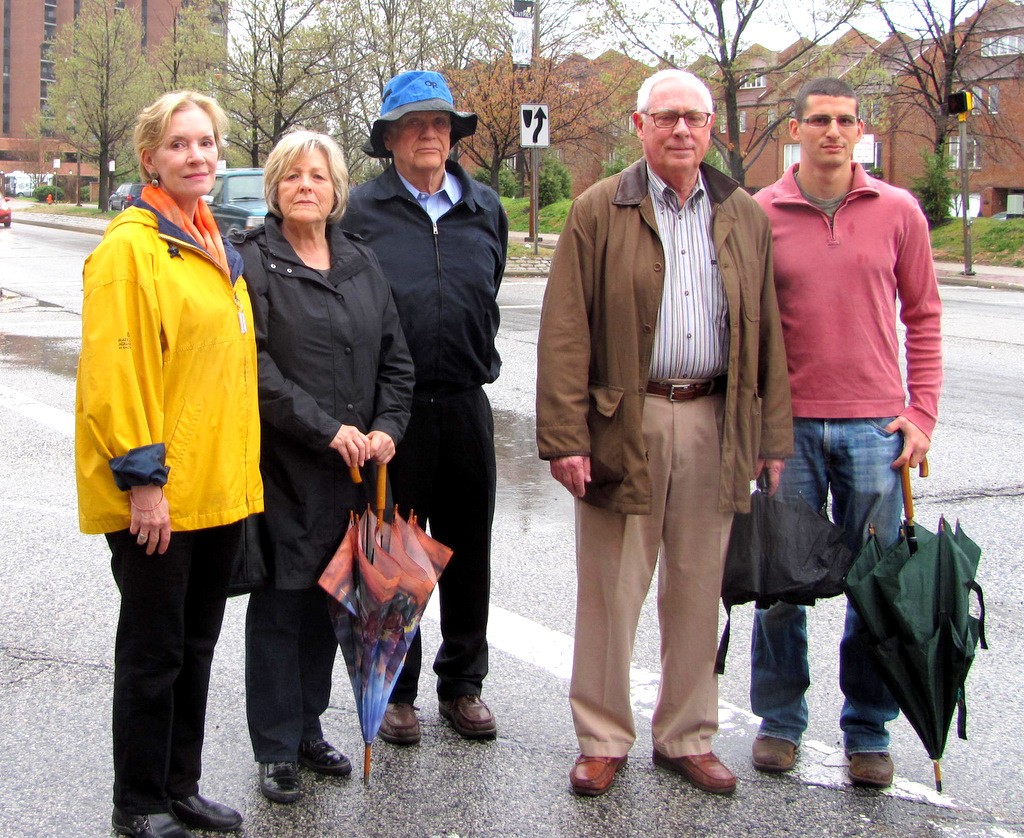 Ferguson asked Robin Budish, director of the Baltimore Streetcar Campaign, for an idea of what could be built in place of the eastern segment.

Kittleson & Associates, a transit engineering group, plotted four streetcar lines radiating from downtown – as well as a circulator route along Broadway and North Avenue – that would roughly cost the same.

He said that advancing technology is making streetcars a viable and low-cost alternative to “light rail” that needs it own right-of-way and stations.

Washington, D.C., for example, is completing the H Street-Benning Road line, which is expected to start revenue service from Washington’s Union Station within a year.

Last year, Mayor Vincent C. Gray established the Streetcar Financing and Governance Task Force to develop recommendations for the governance and financing of a “DC Streetcar” system. The task force is charged with advancing a 22-mile priority streetcar system to complement the current Metrorail system and bring transit options to more city neighborhoods.

Echoing the sentiments of the Right Rail Coalition, Ferguson says a neighborhood-based streetcar network should be explored in Baltimore.