The speed cameras that the Board of Estimates has agreed to buy from the Brekford Corp. are 18% more expensive than the speed cameras offered by the city’s former vendor, The Brew has found during a review of contract prices.

The cost differential is significant because the Rawlings-Blake administration has justified the $2.2 million speed camera purchase as a good investment for the city because Brekford, a small Hanover-based company, is charging less than its bigger competitors.

“So Brekford’s prices were lower than all the others you contacted?” asked Pratt.

In fact, the unit price of Brekford’s cameras was considerably higher than those that were offered by Xerox State & Local Solutions – and only marginally lower than a third bidder, Redflex Traffic Systems, according to city documents.

The Brekford figure, signed by the company’s CEO Chandra (C.D.) Breckin, makes its cameras 18.3% higher than the Xerox cameras and 9% lower than the Redflex equipment.

Brekford also charges $2,500 for installing a concrete pad for each portable camera. Xerox said it would charge no fee for the pads, and Redflex would charge $1,500.

During the board meeting, Krus said he did not have the specified bid prices at hand, but cited Brekford’s low price at least four times. (As part of its arrangement with the city, Brekford agreed to absorb half of the unit price of the cameras because all 72 cameras were originally contracted to be free of charge to the city.) 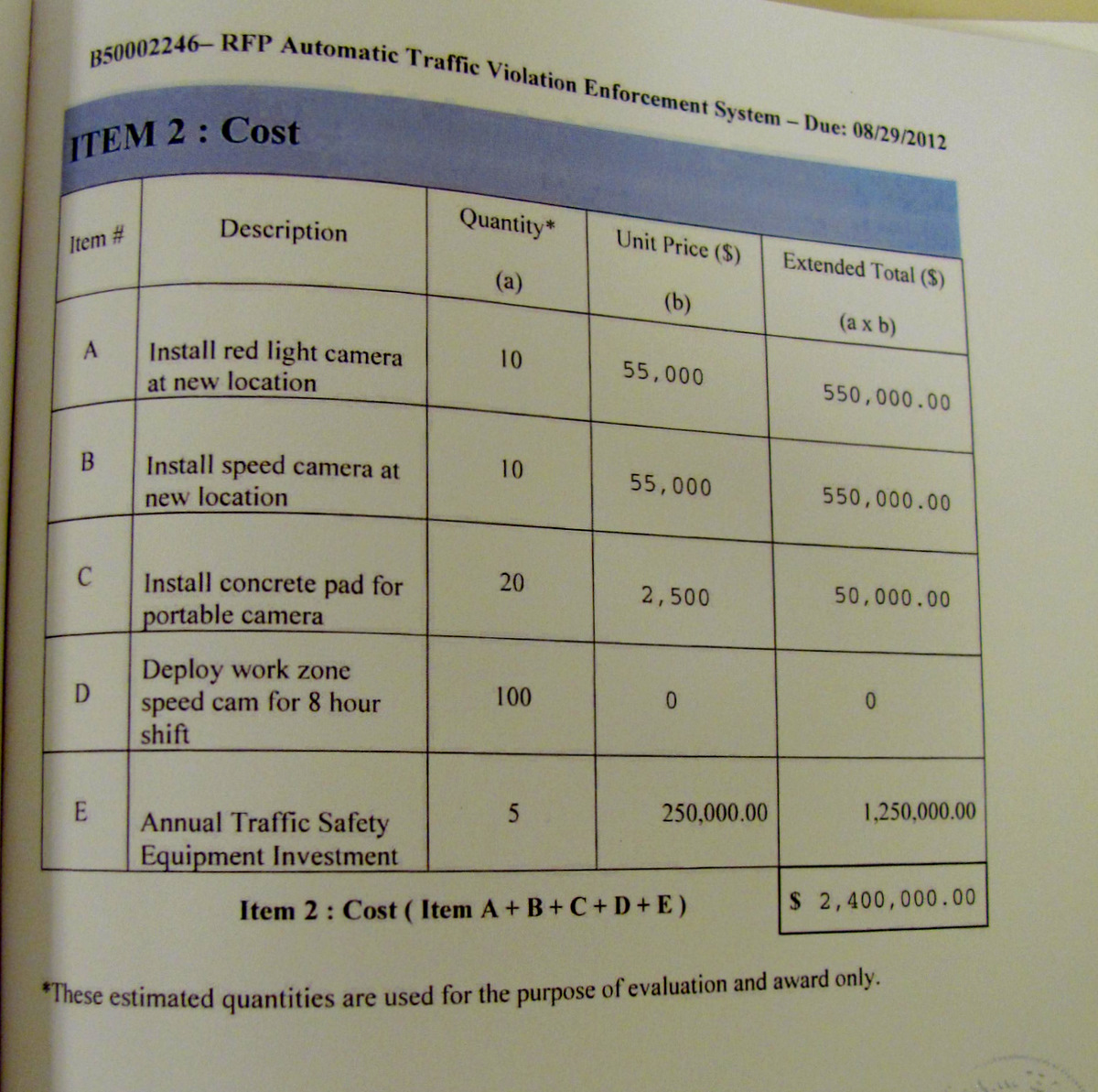 Price sheet for the purchase and installation of speed cameras by Brekford (above) and Xerox (below). The unit price (column 4) shows a $8,500 difference between Brekford’s and Xerox’s speed cameras. Overall, Xerox would charge less for the operation of the system than Brekford, but Brekford would give the city a slightly higher percentage of the traffic fines. (Board of Estimates archives) 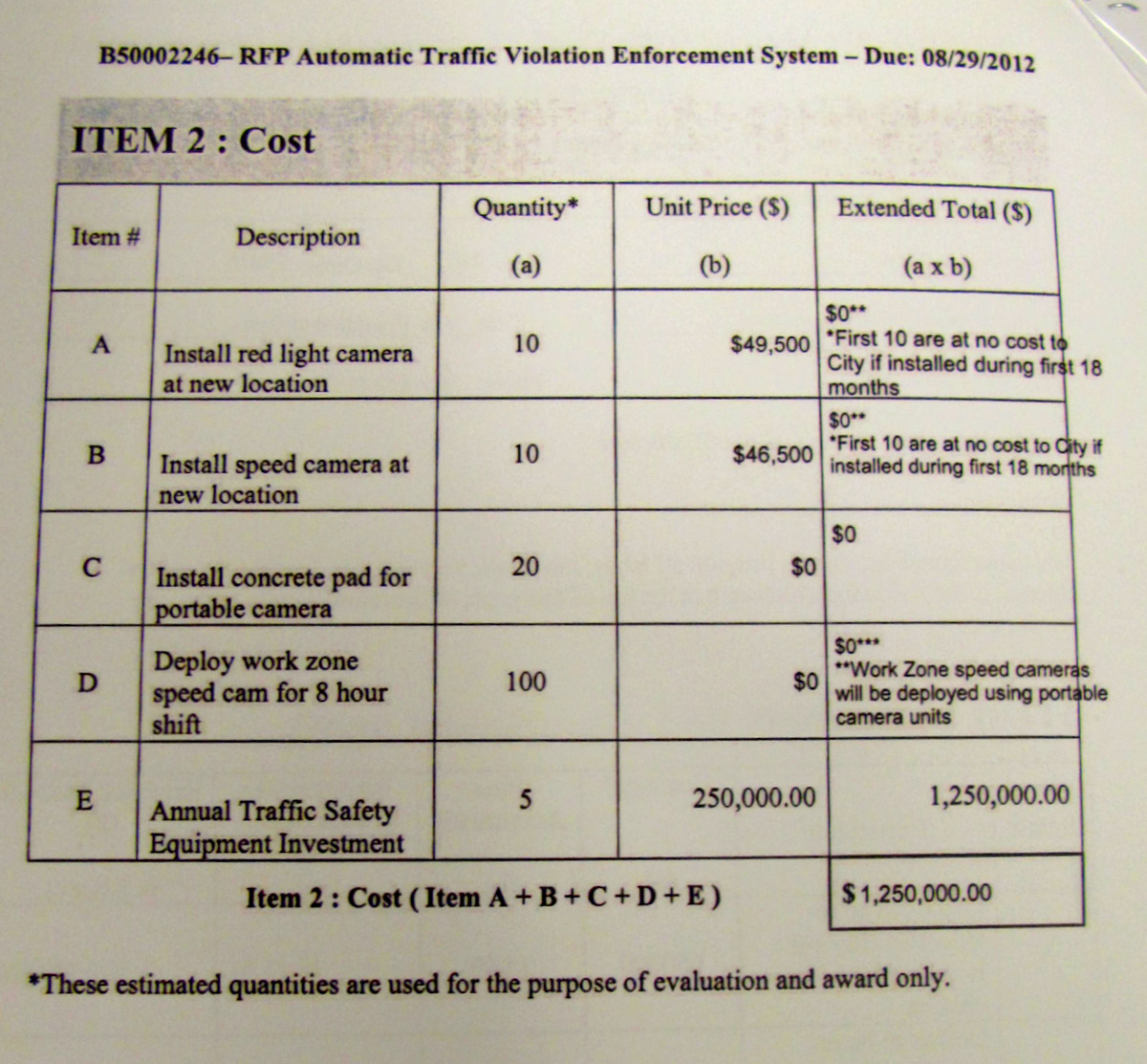 Supposed to Cost Nothing

The original contract, submitted to the board last November, was described as a “revenue contract” that would not cost taxpayers any money. The vendor would service the city’s 72 existing speed cameras and pay for other upfront costs.

Lauding Brekford’s bid, Mayor Stephanie Rawlings-Blake described it not only as “the cheapest,” but the best. “They came out on top,” she declared at the meeting.

But the contract has experienced problems ever since Brekford took over from Xerox on January 1. In the latest setback, the city temporarily suspended the program to address “clerical mistakes” that resulted in an undisclosed number of erroneous tickets given out to motorists on The Alameda.

To get the cameras working again, the Rawlings-Blake administration agreed to pay for new speed cameras, replacing the old cameras, so they could run problem-free on Brekford’s software.

Comptroller Pratt asked Krus why the city did not contact the other vendors to see if the city was getting the best price – or to negotiate Brekford’s price downward.

“We decided it was not practical to seek competitive bids on these additional cameras,” Krus answered. 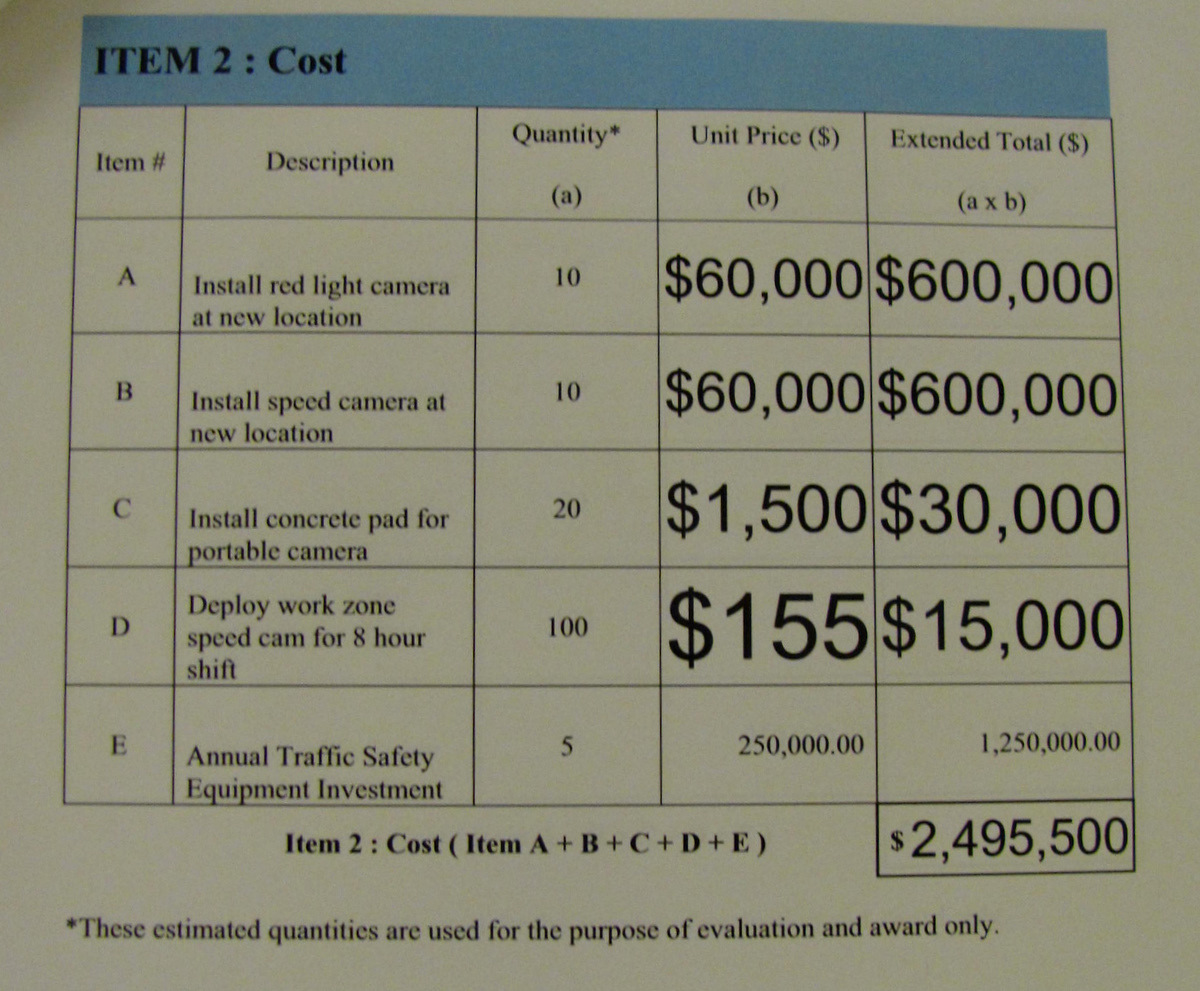 Redflex’s prices were 9% above Brekford’s, but its installation cost for concrete pads was lower. (Board of Estimates archives)