Two years after first announcing the plan, Baltimore City is slowly wheeling its way to a modest bikeshare network. As is so often the case in municipal government, money has been the main barrier (or impetus) to moving the program forward.

In March 2011, the city was in the process of selecting a vendor to operate a network of rental bikes that could be accessed through computerized kiosks placed around the city.

The effort was then suspended (in the midst of a mayoral primary campaign) because of fears that it would require too much upfront funds in a city short of cash for youth rec centers and schools.

Eight months later, the plan was revived with an agreement, approved by the Board of Estimates, to give B-cycle LLC the exclusive right to negotiate a concession with the city so long as no operating subsidies were required. 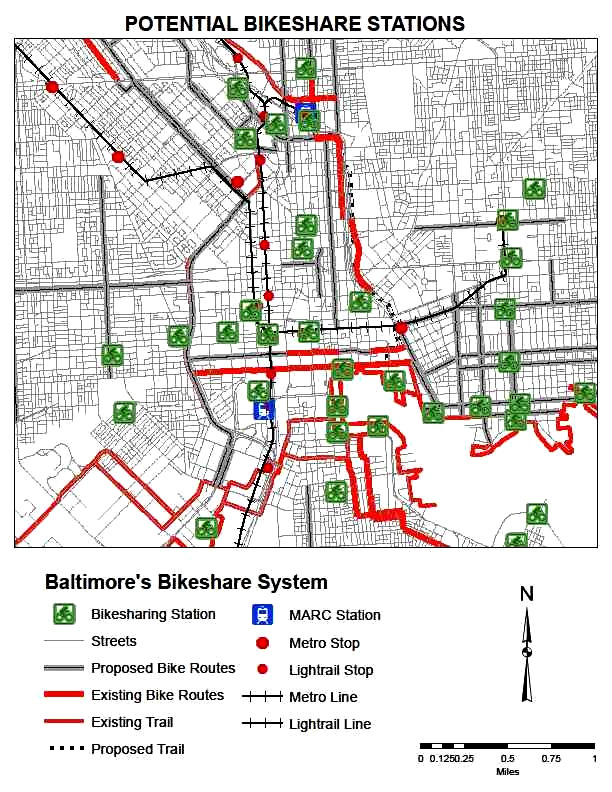 This money will help implement “Phase 1” of a bikeshare plan by paying for about 80% of the capital costs of installing kiosks and other infrastructure for about 250 rental bikes, designed for short trips around downtown or between waterfront destinations.

The new funds, in turn, come from the federal government. The feds recently awarded Maryland DOT funds as part of the Maryland Bikeshare Program, which in turn is part of the state’s bigger Cycle Maryland initiative.

Making matters even more bureaucratically cumbersome, the Baltimore Regional Transportation Board (BRTB) is responsible for approving federally-funded bikeshare programs in the metro area.

This agency is slowly developing long-range planning priorities for bike lanes and whatnot. Last month it awarded $50,000 to Howard County to study the feasibility of bikesharing there.

At this morning’s Board of Estimates meeting, the grant money will be accepted by the mayor and her colleagues. While the city has not yet figured out how to finance its 20% share – or determined who might run the kiosks – it has bestowed the program with a name: Charm City Bikeshare.

So What is Bikesharing?

It’s a system in which bikes are available for shared use between established “docking stations,” which look like bike racks controlled by locking and unlocking devices next to a kiosk.

Users can access the bikes through a yearly membership pass or modest rental fee – the first 30 minutes of use is typically free – and are responsible for any damage until the bike is returned to the same or another kiosk.

Originated in Europe, the program has taken root in Denver, Minneapolis, Boston and Washington, D.C., where Capital Bikeshare has become a popular alternative to cars and buses in the central city. (Baltimoreans can try it out the system by accessing the kiosk at Union Station.)

Bikesharing is aimed at helping to solve the “last mile” problem of mass transit, connecting riders of, say, MTA buses or MARC trains to their final destinations.

City DOT officials say Charm City Bikeshare could become a reality in a year. But they said much the same two years ago.

Here, from The Brew’s morgue, are more details about the plan: