The images on the screen were jarring to me, as a physician who treats patients in Baltimore, many of whom suffer from our national epidemic of diabetes and obesity.

There at a for-credit course for Maryland dietitians last month were the McDonald’s “golden arches” on a Power Point presentation titled, “The Fast Food Industry Response to a Call for Nutritional Advancement.”

Cheeseburgers and french fries flashed by. The Egg McMuffin, the audience was told, is one of the chain’s “Wholesome Starts” because it includes “real eggs” (not powdered), and because there is now some whole wheat flour in the muffin, and the Canadian style bacon is a good source of protein.

A McDonald’s representative informed the registered dietitians (gathered in a Linthicum Heights meeting room for the annual meeting of the Maryland Academy of Nutrition and Dietetics) about “ways to give your patients nutrition-minded fast food advice.”

They were reassured that McDonald’s snacks meet “the snack guidelines” – apparently developed by McDonald’s itself. And who knew that the global fast food giant is “championing children’s well-being?”

I felt I’d just had a very graphic illustration of the degree to which powerful food industry interests have been framing the national conversation around nutrition – and co-opting the very professionals who could be steering individuals and policymakers in a better direction.

Dietitians Ought to Know Better

The experience explained a lot for me in a greasy, unpleasant sort of way.

Baltimore is a national leader in promoting access to healthy, affordable food through programs such as the city’s Food Policy Initiative, Virtual Supermarkets, the Food Desert Map and numerous public school programs.

An impressive array of government agencies, community organizations, volunteers, foundations and researches are working to improve nutrition for Baltimore residents. 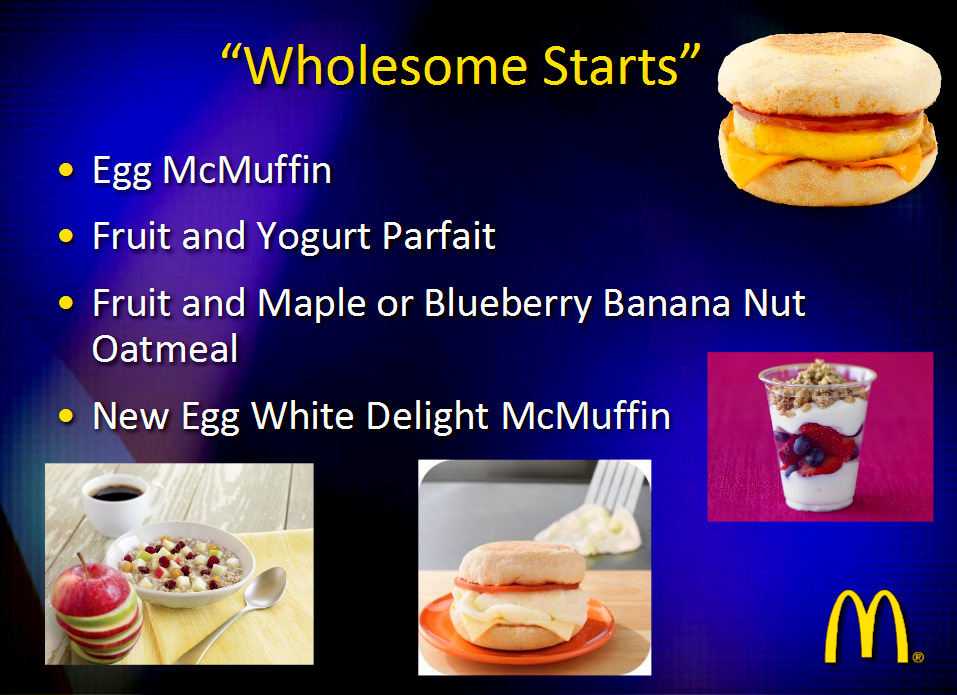 Part of the Solution?

This annual convention of Maryland’s registered dietitians, featuring information from their fast food corporate sponsors, helps explain why we are losing the war on obesity and diabetes.

One might assume that the state’s 2,500 dietitians would be a powerful ally in this public health struggle.

But here they were inviting a speaker who was advancing the food industry’s long-term marketing goal of creating the impression that they are “part of the solution,” working to improve the nation’s health while, according to Michele Simon’s revealing book, Appetite for Profit, lobbying ferociously against regulation or other public health policies.

Simon, a lawyer who specializes in legal issues involving the food industry, released a report in January titled, “And Now a Word from Our Sponsors: Are America’s Nutrition Professionals in the Pocket of Big Food?”

So Much at Stake

U.S. obesity rates have doubled in 30 years, and one in three Americans are now obese, a situation unprecedented in human history.

The obesity crisis has led to skyrocketing chronic disease rates that are the principle driver of health care costs and the greatest cause of federal budget deficits.

It is clear that exercise alone is not very effective at promoting weight loss, and it is the dramatic change in the American diet, not lack of exercise, that has brought us to this point.

It is astounding that our society has no rational plan for addressing the crisis. The medical establishment seems to think we can prescribe our way to good health, and Registered Dietitians recommend “portion control” as a predominant modality.

As we attempt to discover the best approaches to the epidemic of chronic disease, the insinuation of Big Food in the health professions is an ominous development.
_____________________________
Joseph A. Adams, M.D., practices primary care internal medicine in Baltimore.