Saying their members are “upset and outraged” about reports that the ultraconservative Koch brothers want to buy the Baltimore Sun’s parent company – and conceivably the Sun itself – progressive and labor organizations today announced a petition opposing such a sale.

“We don’t want to see [a sale to] the Koch brothers, who are right-wing billionaires who funded everything from Scott Walker’s re-election campaign in Wisconsin to bust unions and take away worker rights to ALEC, which supported stand your ground laws. . . and denies climate change,” said Matthew Hanson, of Maryland Working Families.

Hanson was one of 10 people who stood outside the Sun’s Calvert Street building today holding signs that said “Preserve Media Neutrality” and “Save the Sun,” before delivering a petition they said had the signatures of 6,500 Maryland residents.

Hanson asked that the petition be handed to Sun CEO and Publisher Timothy Ryan. It was addressed to Peter Liguori, Tribune Company CEO.

Hanson was allowed by a security guard to bring the sheaf of signatures into the lobby, while the other picketers waited outside.

Their action was meant to coordinate with efforts mounted nationwide to forestall the sale of the ailing Tribune chain or any of its media properties to the Kochs.

Since reports surfaced in April that Tribune, months after emerging from bankruptcy, had attracted the attention of the billionaire brothers, a campaign of resistance has flared, so far largely focusing on the more prominent regional papers owned by Tribune, the Los Angeles Times and the Chicago Tribune.

There have been ads, protests, opposition from California state legislative leaders and a host of online petition against a Koch Tribune purchase.

Today’s action outside the Sun was the first locally to raise the issue of a sale of Maryland’s largest daily paper. The Courage Campaign Institute and Forecast the Facts have said that, with other groups, they delivered more than 250,000 signatures against Koch ownership to the Los Angeles Times headquarters last month. 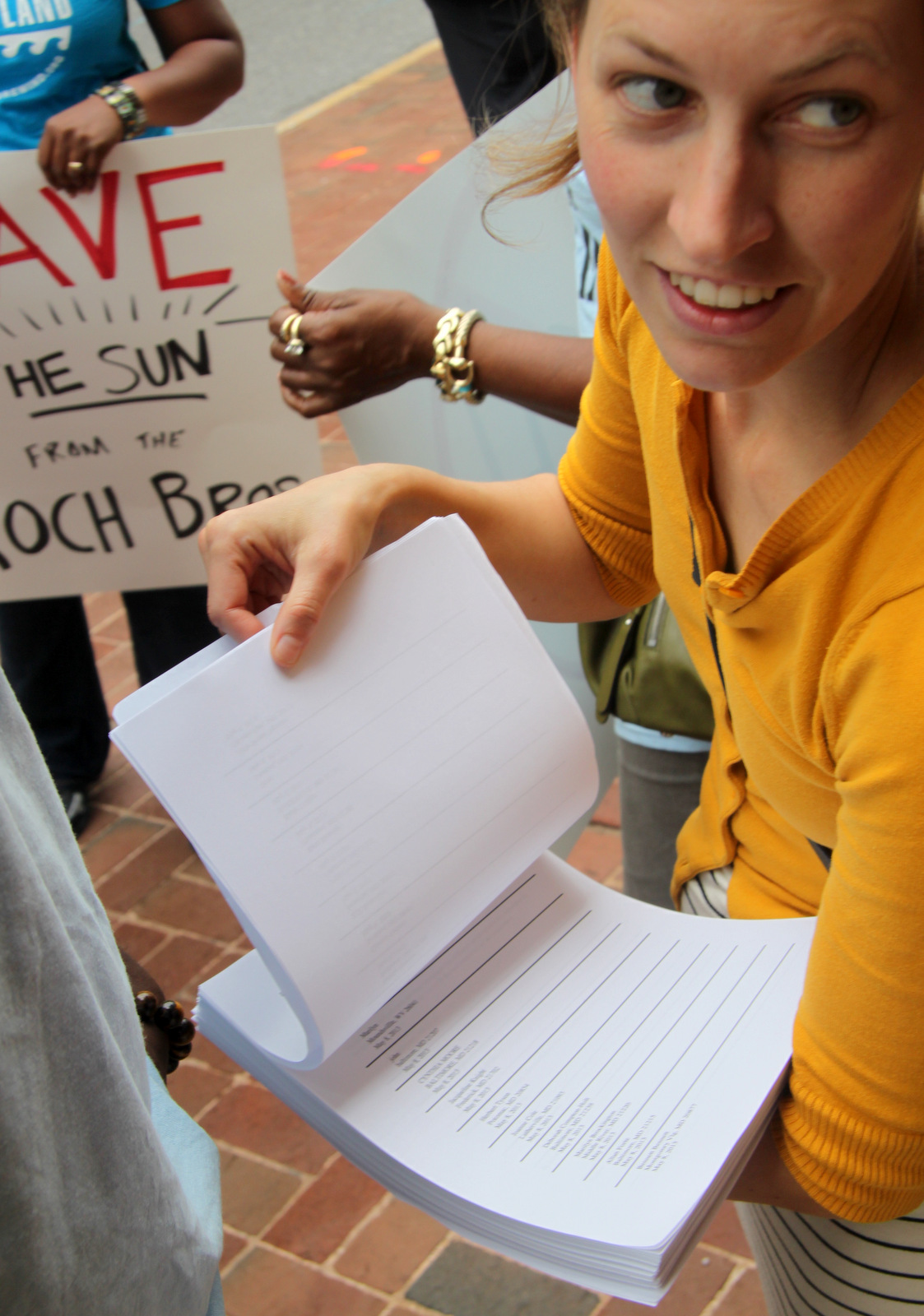 Wichita Kansas-based Koch Industries, one of the biggest financial backers of libertarian organizations, has financed conservative think tanks such as the Cato Institute and helped establish Americans for Prosperity, “the political action group that helped galvanize Tea party organizations and their causes.” the New York Times says.

This week’s New Yorker has a revealing piece describing the influence the Kochs already appear to be exerting on the media: “A Word from Our Sponsors: Public television’s attempts to placate David Koch.”

Several speakers today said Maryland residents should worry about possible Koch ownership of the Sun not only because they are conservative business owners but because they have expressed an interest in media ownership “to make sure our voice is being heard,” the Times reported, quoting unnamed sources.

The Kochs have declined to comment on the controversy or the pending sale, saying only through a spokeswoman that they “respect the independence of the journalistic institutions” involved.

The likelihood of a Tribune sale is a hot topic of speculation in media circles, with some opponents pinning their hopes on recent remarks made by Tribune CEO Liguori, in which he observed that sale talk are “premature.”

The idea of a Koch sale was only the latest recent news to jolt Sun readers wondering where the financial woes of their paper’s out-of-town owner might leave them.

On that possibility, Hanson and the others had no comment today. But the prospect continues to privately rattle Sun reporters and others in town, since Cordish is a politically-plugged-in national developer and a frequent and often controversial subject of news coverage himself.

Asked why they came, several demonstrators today said they want more coverage of their communities and bemoaned the lack of it from local media.

“I’d like to see some more honest stories, some real stories and also more positive stories,” said Perrice Austin, of Maryland Communities United. “You watch the news and it’s 30 minutes of death and loss and fluff.”

Wendy Rambo Shuford, of Cross Keys, said she’d like to see a return to the days of Sun foreign bureaus.

Asked what she thinks of the coverage of her Howard Park community, Shirley Williams replied,  “What coverage? We are a forgotten part of the city.”

Williams said she doesn’t know too much about the Kochs except that her church asks her not to buy the products of companies associated with them and “they’re against President Obama.”

Meanwhile, at least one reader, apparently, would welcome a a rightward shift under any Sun owner.

“The Sun is a left-wing socialist rag,” said a man who steered his SUV over to the sidewalk demonstration and yelled through the window. “I hope it dies a struggling death!”

At one point during today’s brief rally, Hanson lauded the L.A. Times staffers who have reportedly said they would quit their jobs if the Kochs became their bosses: “They’re really heroes – they put their jobs on the line.”

Sun reporter Lorraine Mirabella, who came outside the building to cover the event, was asked if there had been any similar talk among her co-workers.

– A video made by Baltimore photojournalist and videographer Bill Hughes.