As city firefighters face the possibility of 24-hour-long shifts to save money, Fire Chief James Clack today announced the filling of two newly-created administrative positions, each carrying annual salaries of about $100,000.

This is the first time the PIO job has gone to a civilian who was not a member of the department (Cartwright was a paramedic and firefighter) – a fact that spawned comment and criticism in rank-and-file circles today.

Brennan noted, in response, that Rick Binetti, a civilian, served as a spokesman for the fire department several years ago. But he served under Cartwright and was not the PIO.

Asked to comment about the Brennan appointment, Michael Campbell, president of Baltimore Fire Officers Local 964, said, “My preference [for the PIO position] is someone with background and operational knowledge – who knows, for example, what it’s like to run into a burning building or treat a family’s medical emergency.”

He said he understood there were several internal candidates for the position. Said another fire officer, who asked not to be named because it is against departmental policy to talk to the media: “He knows nothing about the daily operation of the department, and that is bad for the department.”

The newly created positions of battalion chief – for community outreach and for administration – will go to Capt. Charline B. Stokes and Capt. Tavon A. Claggett, respectively. 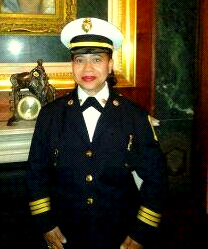 A 26-year veteran of the department, Stokes will be the first African-American female to attain the rank of battalion chief in the department’s 154-year history.

“Chief Stokes is a superb addition to our command staff,” Clack said in a press release. “For many years, her commitment to excellence and community engagement has made her a valuable asset in the department and for the city of Baltimore.”

Stokes called her appointment “another important step toward increasing diversity within the entire fire department.”

Her appointment, to community outreach, involves a part of the department that was downgraded by Chief Clack last year and, according to various informed sources, was on the verge of being dissolved.

In addition to community outreach, Stokes will be responsible for the EMS (emergency medical service) billing system, which has come under criticism for its haphazard collection of fees from private ambulance services.

The new high-level positions come as an arbitrator is set to hear testimony by Fire Officers Local 964 and Firefighters Local 734 about the city’s plan to reduce the number of shifts in fire companies from four to three.

Firefighters and officers rejected the plan by a 90%-10% margin in a recent vote.

Chief Clack says the new system has been deployed by many cities, such as Minneapolis where he was the former fire chief, and would prevent the threat of more firehouse closings to balance the city’s budget.

Brennan became press secretary to Mayor Sheila Dixon in 2006 after working as a web designer in the administrations of three New Jersey governors. Prior to that, he worked for former Maryland Lieut. Gov. Kathleen Kennedy Townsend.

Brennan, who will be paid $92,000 as Fire PIO – up from his current salary “in the high $60,000s” – said he does not believe his lack of experience as a firefighter or paramedic will affect his job performance.

“We have a team here and I’m part of the larger team,” he said in a phone interview today. He said he’s been involved in public safety issues as a member of the mayor’s staff and worked as PIO for the Joint Information Center, the city’s outpost of the National Incident Management System.

Referring to his predecessor, Kevin Cartwright, Brennan said, “Kevin was responsive, trusted and well liked, and I would want to provide that level of communication with the public.”

He said, for example, that he would like to bring more attention to the importance of smoke detectors in homes. “Chief Clack has spoken to me repeatedly over the years about smoke detectors – how they are instrumental in [helping] the department, which has so drastically reduced fire deaths. This is a top priority of the mayor and we hope to reduce the fire toll to zero.”