The contractor responsible for stabilizing the former Read’s Drug Store building at Howard and Lexington streets – part of the long-stalled Superblock project – is asking for another $129,000 from the city.

J.A. Argetakis is seeking an Extra Work Order (EWO) payment as part of its efforts to stabilize the roof and walls of the long-vacant, city-owned building slated to be recycled into a “big box” retail store.
_________________________
UPDATE: The Board of Estimates approved the EWO payment at its Wednesday meeting, with City Council President Bernard C. “Jack” Young voting “no,” and the board’s two other elected officials – Mayor Stephanie Rawlings-Blake and City Comptroller Joan Pratt – voting “yes.”
________________________
Argetakis was the low bidder to install a temporary membrane roof and rebuild steel framing at Read’s in February 2012. Following tomorrow’s expected approval of the EWO by the Board of Estimates, the project’s cost will have risen 40%, from $349,000 to $489,000 (including an earlier EWO), making it only slightly below the highest of the seven original bids.

The Department of General Services, which manages the contract, offered no explanation in the Board of Estimates agenda for the cost overrun.

Meanwhile, the fate of the entire $150 million Superblock project remains up in the air.

The Baltimore Development Corporation (BDC) recently told the Maryland Daily Record that the developer, Lexington Square Partners, wants a sixth extension of its land-sale agreement with the city.
_______________________
From the Brew Archives:
An inconvenient truth about Superblock (9/21/12)
______________________
Last December, the Board of Estimates and City Council approved the sale of the 3.6-acre parcel for $2.85 million – a fraction of the property’s $21.6 million appraised value when the city first entered into the agreement to sell the land in 2007. 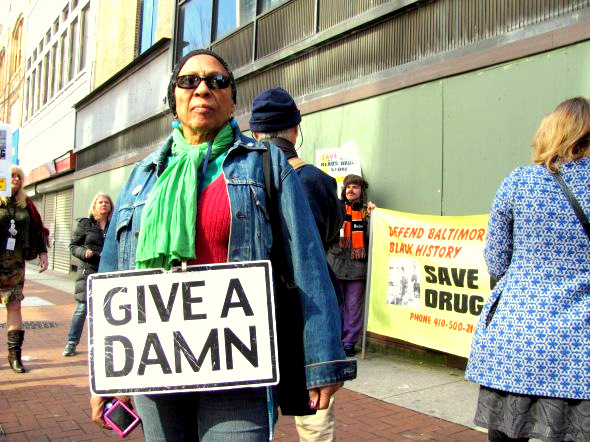 Kay Adler demonstrates against the Superblock project and for the full preservation of the Read’s Drug Store last year. (Photo by Mark Reutter)

In addition, the Council and Mayor Stephanie Rawlings-Blake agreed to give a $22.1 million PILOT tax break to the group of New York and Atlanta developers after the BDC determined that “private-sector economics won’t work,” in the words of ex-BDC president M.J. “Jay” Brodie.

A representative for the developers said at a hearing before the City Council that it needed the PILOT to obtain a $100 million construction loan and other financing.

Since 2011, when the Rawlings-Blake administration began a major push to win political support for the project – saying it would bring hundreds of new jobs to Baltimore – Lexington Square has promised that private financing would be secured in the near future.

Dozens of buildings on the block bounded by Howard, Lexington and Fayette streets and Park Avenue have lay derelict since the BDC evicted small merchants and acquired the buildings under the Martin O’Malley administration.

The Read’s building became so deteriorated under city ownership that some members of the city’s historic commission, CHAP, worried at a public meeting that the structure could collapse. Or in the words of CHAP commissioner Larry Gibson, it may be subject to “demolition by neglect.”

In addition to a leaking roof and structural damage, the Read’s building contains asbestos that requires remediation before any new construction could begin.