This morning contractors hired by the city plan to use a special “pipe-bursting” technique to replace a 440-foot section of sewer pipe where a break last week caused a 28,500-gallon sewage overflow into Stony Run.

Guy Hollyday is very familiar with the place where the foul-smelling raw sewage had been spewing out on June 6 – two storm sewer outfalls on the stream bank, below the University Parkway bridge on the side closest to San Martin Drive.

“I reported that spot to the city in 2001,” said Hollyday, onetime chairman of the Jones Falls Watershed Association and longtime Baltimore stream watcher.

Hollyday popped up last week, the day after the sewage overflow, to watch the work crews on 39th Street (in the median near the Hopkins Deli).

He took a reporter on a hike down to the edge of the rain-swollen waterway and pointed out the storm sewer outfalls, explaining what he has observed about them over the years: “One of them has sewage flowing out of it constantly and the other has sewage mixed in when there’s a lot of rain.” 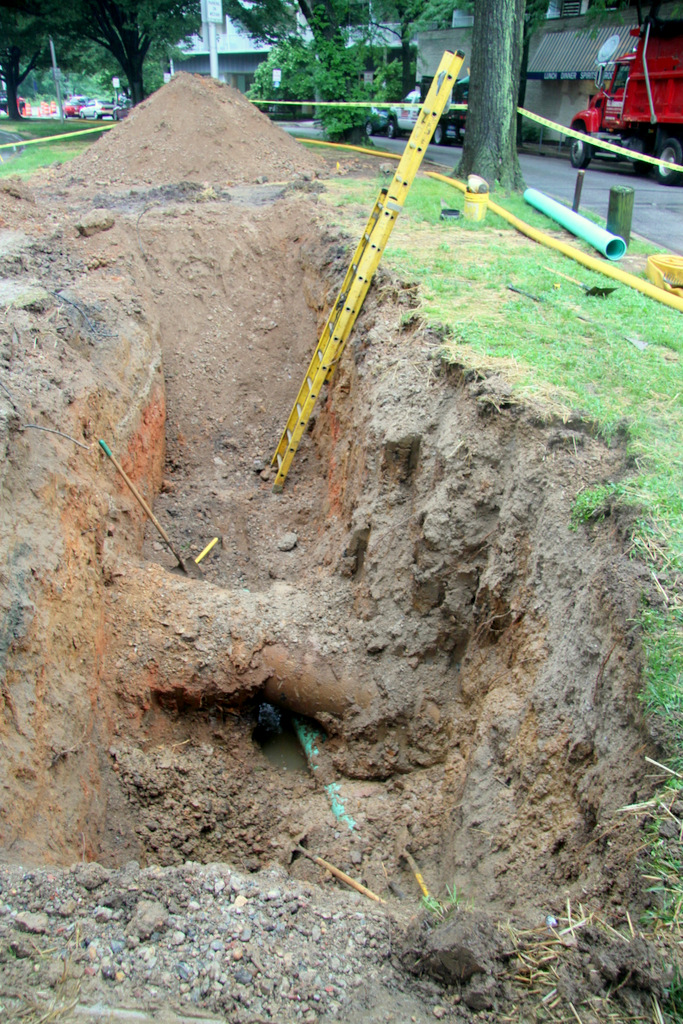 Workers dug up the median on West 39th Street to find the source of a sewage overflow. (Photo by Fern Shen)

“It’s one of ‘The Filthy Five,’” Hollyday said.

As he predicted, a little Googling produced a map with the Stony Run outfalls and four other chronic sources of sewage that Baltimore environmentalists have been complaining about for more than a decade.

Asked whether the broken pipe causing the June 6 overflow (and prompting their decision to replace a segment of the 98-year-old sewer line) has any connection to the problems that Hollyday’s been pointing to for a decade, the city says “no.”

“The Stony Run trouble spot you have mentioned is unrelated to the pipe that is currently being repaired,” Department of Public Works spokesman Jeffrey Raymond said via email.

“It would be great if what you’re doing somehow fixed the problem,” Hollyday had said wistfully to the workers, looking down into the muddy hole, where new-looking blue sewer line lay next to a big old-looking concrete stormwater pipe.

So, what has the city been doing about the years-old problem since they signed the decree? And what is this pipe-bursting they’re doing now?

When The Brew visited 39th Street last week, the crew from R.E. Harrington had not yet figured it all out. Dye tests that turned the water a spectacular crimson color had not helped them isolate a cause.

Later, Raymond said the break had been found near Stony Run Lane and a worker we met on a later visit described the cause of the breakage there as a cluster of roots that had destroyed pipe dating back to 1915.

(Another worker, Avery Johnson, said last week he had been involved in replacing sewer line in that spot two years ago and pointed to new looking blue plastic 8″ pipe visible in the open trench. Kocher and Raymond said this was a spot repair, not replacement.)

As for “pipe-bursting,” it’s a technique whereby old line is destroyed as new pipe is pulled through with a winch and no trenching is required. A device blasts sections of old pipe and then pulls up the replacement vessel to take its place.

“The segment they’re putting in was due for replacement anyway because of its age and this just speeds up the replacement schedule,” said Department of Public Works spokesman Kurt L. Kocher. The work is expected to cost between $60,000 and $70,000, Raymond said. 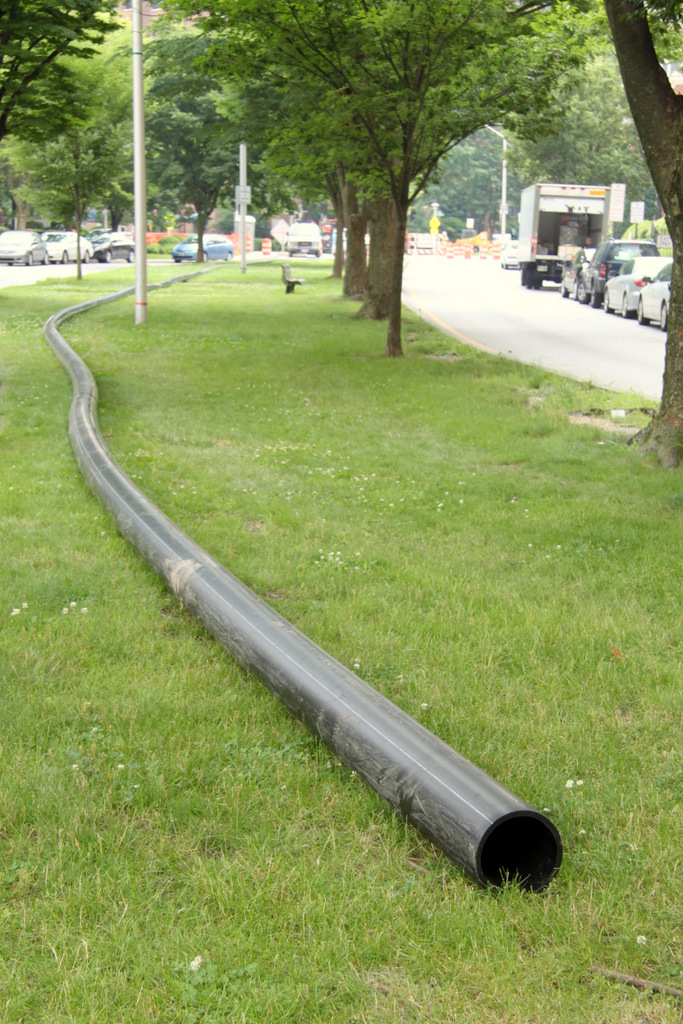 The segment being replaced ends at a manhole just across University Parkway, at the top of the vegetation-covered hill leading down to Stony Run.

Whatever problems are below that point, the worker on-site said, are not being addressed by this project, although he added that they are “going to TV it,” meaning put a camera down the pipe closer to the waterway.

He pointed to the weedy hillside, noting that a trail was going to be cut to allow workers to go down the hill.

According to the city, the chronically-flowing sewage entering Stony Run at that spot is a problem they will address as part of the city-wide consent decree they signed with the Environmental Protection Agency (EPA) in 2002.

Since it’s been 11 years, we asked what Baltimore has done at Stony Run to live up to the decree, which requires the city to follow a timetable to implement corrective measures.

“The entire sewer conveyance system has undergone an extensive study/examination and design in preparation for the construction phase of the consent decree program,” Raymond said via email. 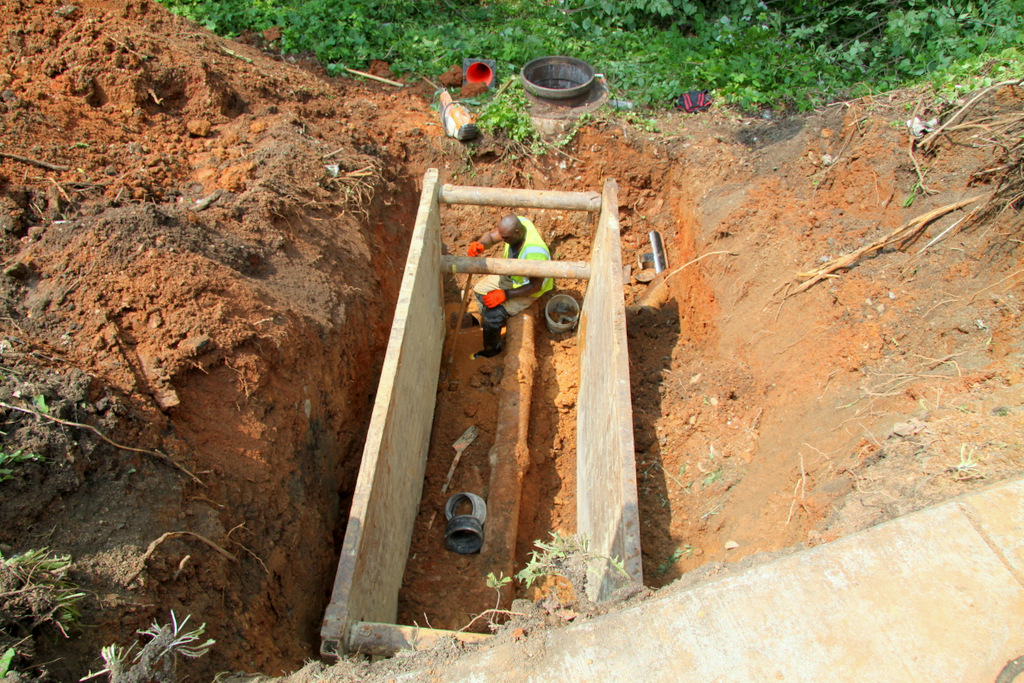 The winch pulling the new pipe through the old line will be positioned in this hole. (Photo by Fern Shen)

Kocher noted that the department has also, citywide, “eliminated illegal stormwater/sewer connections from private properties,” which could contribute to these overflows.  (Some of these were around Stony Run and removing them “had a positive impact on the stream,” he said.)

The Brew recently reported on the city’s apparently successful efforts to renegotiate the terms of the decree in the face of estimates that overhauling the aging system might cost in the neighborhood of $2 billion.

In an interview, the chief of the Bureau of Water and Wastewater, Rudy Chow, said that a tentative agreement had been reached with EPA to rewrite the decree to shave $500 million from the city’s costs. (Public Works spokesmen since then have taken pains to stress that the re-worked decree does not have final EPA or court approval.)

Meanwhile, as the city maneuvers to find the funds and public support for the big fix, Raymond and Kocher said that the 440-foot fix on West 39th Street will help.

The people who walk, run, and take children and dogs on the paths along Stony Run will have to be the judge of whether that prediction comes true. Last week, several readers commented that even before the spill, Stony Run has moments when it smells awfully bad. 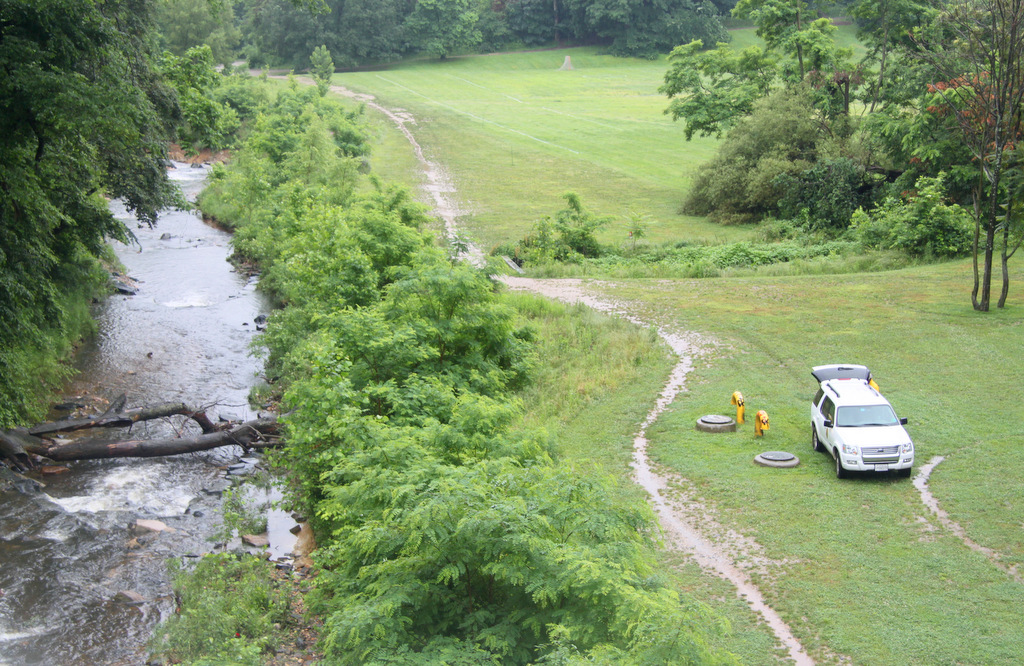 Looking down from the University Parkway bridge at a television cameraman’s car. He shot across Stony Run to get a view of outfalls on the other side. (Photo by Fern Shen)