About a dozen senior citizens from the Bel-Park Tower public housing complex – some using canes and walkers – picketed outside the Baltimore Department of Housing today, saying the agency is ignoring their complaints about loitering, drug dealing and vandalism at the northwest Baltimore apartment tower.

“We’ve got major security issues. We have no locks on the ingress and egress doors. People are walking in and out,” said Bernadette White, president of the Resident’s Council. “We’ve got people in there sleeping in the lobby, in the hallway, on mattresses.”

“There are people urinating in the elevators. People sleeping in the stairwells. They’re looking for any warm place,” said Mary Lawson, delegate to the Resident Advisory Board for Bel-Park, which is at 3800 W. Belvedere Ave.

Lawson said these non-residents are destroying or putting bags on security cameras, in some cases dealing drugs and scaring the senior citizens who live there.

A spokeswoman for the Housing Authority of Baltimore City [HABC] said they are aware of the problems and are planning “this week” to address them.

“We definitely heard their concerns and will be taking steps to tighten security, acting to secure the building and looking for long-term solutions,” said Cheron Porter, communications chief for the department.

But just what long-term solutions might actually be undertaken was unclear, given the set-up of the building and what Porter described the department’s “budget limitations.”

“Not Allowed to Leave the Booth”

Residents said the “monitor” who works in the building’s front lobby during the day is afraid to come out of his glass booth – which hampers his ability to stop people entering the building who don’t live there or may be causing trouble.

“We had a good one – he actually ran out to the elevator and stopped people going up – but he left,” Lawson said. “He was threatened. They really threatened him, so he left.” (Lawson said she has been threatened too.)

One major problem is the side doors which can’t be locked (because they’re potential fire exits) are being propped open by residents, allowing easy access to anyone, the seniors said. 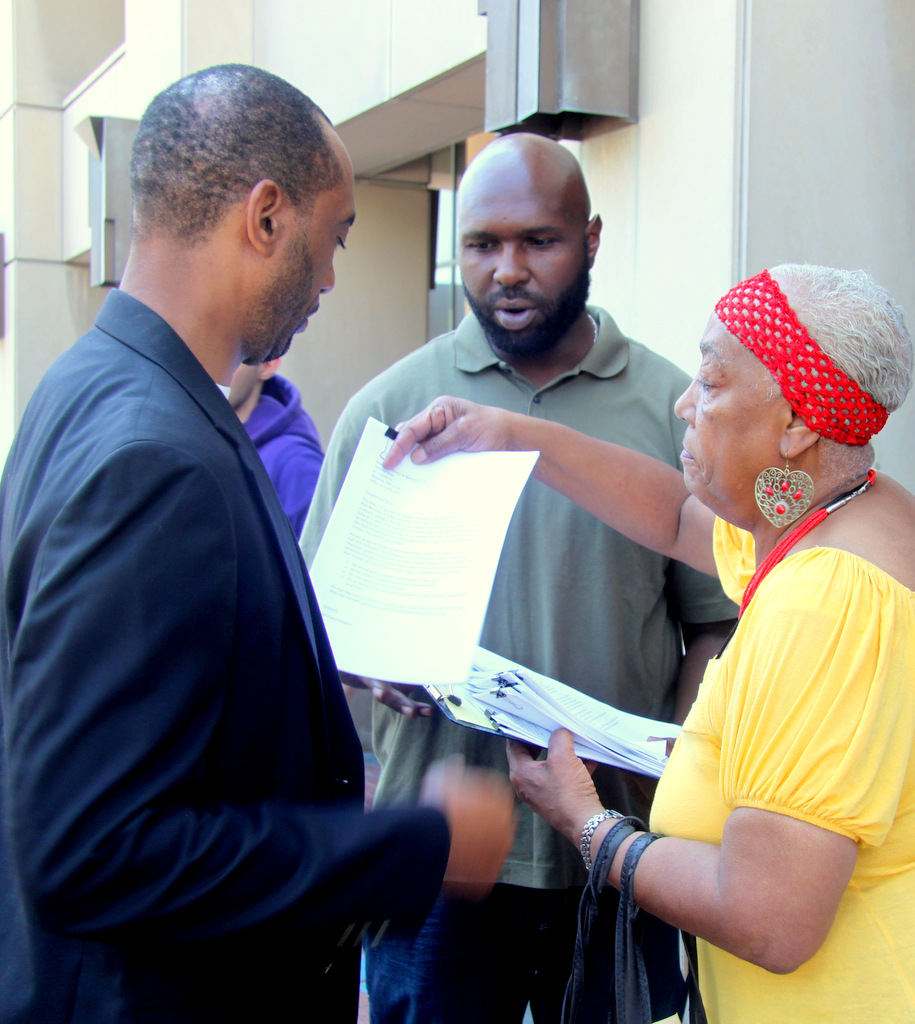 Another issue, they said, is the changing make-up of the occupants of Bel-Park. The population of the 11-story, 274-unit building, like other HABC senior housing buildings, expanded in recent years to include people with disabilities, a response to changing federal mandates.

Residents said these neighbors let  a troublesome crowd into the building, an issue raised in a 2005 Abell Foundation report.

“That’s when it all started to change,” said White.

Assistant Commissioner of Housing Anthony Scott, who came outside to talk to the group, challenged her assertion.”We don’t want to demonize a population,” he said.

He said the monitors are told not to leave their booth if they see a possible criminal situation and are supposed to call the police if they see trouble.

The residents said they have been complaining about the problems for months, with no response.

Scott noted that the Inspector General for Housing, Kevin White, and Sean Buchanan, associate Deputy Director of Public Housing Operations, were at Bel-Park this week to inspect.

Scott said simply calling police when there is a problem is not a solution: “We need something more long-term and preventive.”

Porter was asked if adding more security – perhaps another person, someone who is not confined to the booth – might be the solution to the problem.

“Ah, now you’re getting into budgetary issues,” she said. “We have to do what we can with the limited resources we have.”

“You Want to Stay Inside with a Hammer”

The residents went inside with Scott to deliver a letter demanding improved 24-hour security. Porter, who spoke to the Brew by phone, said, “I cannot speak to the question of drug activity,” but acknowledged the department has other issues to address.

Until the situation is resolved, the seniors said, they are dealing with the situation by hiding inside their apartments. Walter Jackson said the strategy Housing has used so far – keeping all residents out of common spaces – isn’t acceptable.

“It’s like a prison, with the common room being closed now,” said Jackson, who has lived in Bel-Park for many years. “You can’t go there and play chess.”

Additional information from Cheron Porter:
“Drug dealing is an issue in the neighborhood. When and if there is a criminal issue with a specific identified resident in the building, we contact the police department and proceed with lease enforcement up to and including eviction.

The building has always been mixed population but was largely populated as if it was senior only. There has been an increase in incidents in the last few years that is requiring greater efforts on security and safety procedures, particularly given the neighborhood conditions.”