Only two people came to the Baltimore Liquor Board hearing yesterday to represent the group that wants to put a German-style beer garden into already bar-brimming Federal Hill – Brett Austin (one of two people whose names are on the application), and their attorney, D. Dusky Holman.

They had perhaps a dozen supporters in the audience.

Meanwhile opponents of “Crossbar der Biergarten” mustered about 80 people – including a Bureau of Labor Statistics statistician, a police officer,  children, a property-owner with five generations in the neighborhood, a city councilman, and the heads of a rare alliance of community associations.

Those who testified spoke of the rowdiness, rats, vandalism, noise, lewdness, parking congestion and other problems they say are escalating because of the bars. 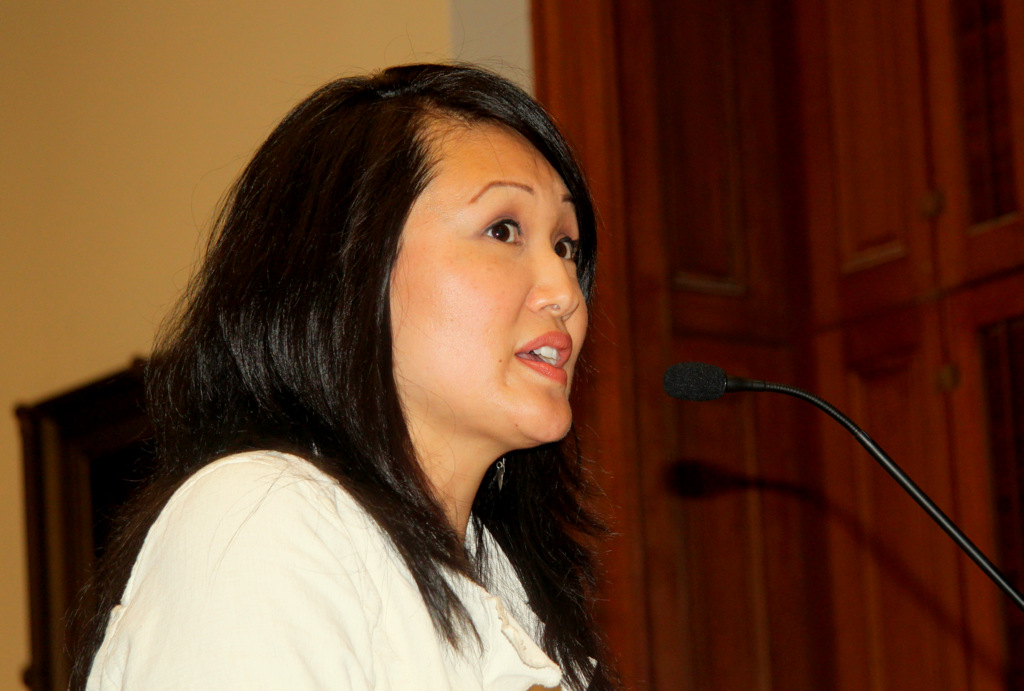 “I had to explain to my daughter why Santa Claus vomited right in front of our eyes in front of the CVS,” said Otterbein resident Judy Chung O’Brien, president of the Downtown Baltimore Family Alliance.

Sally Dworak-Fisher, whose home is near the intersection of Henrietta and Light streets, described the stream of weekend drinkers flowing out of the bars at 2 a.m. “like clockwork,” often urinating on the side door of her house.

“This is a residential neighborhood!” she recalled saying to one of them, to which he reportedly replied: “I don’t give a shit, I come from Harford County.”

And yet, despite the show of force – and as a possible mark of how cynical many have become about liquor law regulation in Baltimore – there was a gasp of surprise at the commissioners’ ruling:

In explaining the decision of the three commissioners following the 3½-hour hearing, Liquor Board chairman Stephan W. Fogleman cited the unusual coalition of community associations and “the unprecedented cohesion and support for denying” the application.

The board didn’t recall ever getting correspondence from O‘Brien’s DBFA group, Fogleman said, noting that it represents about 3,000 city families, 1,200 of them hailing from South Baltimore.

“It was a bit of a surprise to this board that they came out,” he commented.

While the concept of the beer garden appeared “upscale,” Fogleman said, “something apparently went wrong here.” He noted that the applicants called only one witness, Brett Austin, who “was unclear on details of security” and acknowledged that “he himself had not reached out to the community.”

“There needed to be more due diligence,” Fogleman said, “more feedback between residents and the owners.”

After the meeting, Crossbar attorney Holman said the applicants “will move forward.” Asked what that meant, Holman said he wasn’t exactly sure, but added, “You don’t expect to lose.”

He said Crossbar could appeal the decision in Circuit Court “or we could go back to the drawing board” with a different concept for the property.

Adding to the unusual circumstances was the timing of the controversial license application, which generated hundreds of petition signatures on both sides. It came on the heels of a stinging audit (critical of the Liquor Board for lax practices) and a subsequent watchdog blog (written by a Community Law Center attorney and promoted in The Brew) that focuses on seeing that the recommendations of the audit are followed.

Most city Liquor Board decisions are delivered in a couple of workman-like sentences – Fogleman’s yesterday came with the measured rhetorical flourishes of a high court judge.

The applicants had sought permission to transfer a liquor license and expand into a four-storefront space on East Cross Street, where they have been talking about an establishment with an enclosed open-air space, bratwurst, pretzels, picnic-style long tables and benches, a 2 a.m. closing time and a 300-person capacity.

Opponents say it’s the kind of large bar they’ve had too much of.

Federal Hill resident Keenan Dworak-Fisher (the statistician) presented data showing that Federal Hill bar expansions have increased their capacity in the last decade by 34% over the past decade. There are now 11 bars that seat more than 150 people located within a block of the city-owned Cross Street Market. 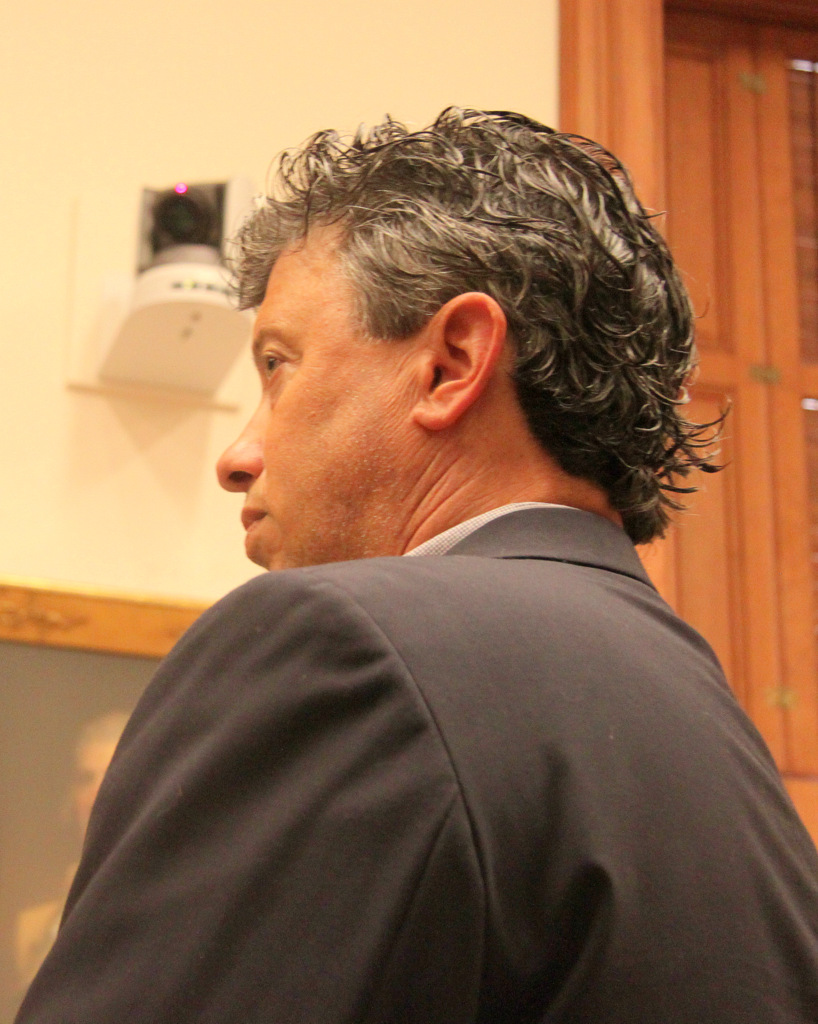 Brett Austin, the only witness testifying on behalf of Crossbar. (Photo by Fern Shen)

“We’ve all been down there, we’ve all seen it,” said South Baltimore’s councilman, William H. Cole IV. “They’ve had enough. The tipping point has been reached.”

But Austin, prompted by Holman to describe Crossbar’s concept, said “not inexpensive beers, more of an up-scale restaurant,” with “high-end [food] and families” that would “not cater to the young partiers.” (As laughter erupted from the audience, Fogleman ejected a loudly-snorting man, saying: “Do you have a medical condition?”)

The beer-garden concept was inspired by a Philadelphia restaurant called Frankford Hall, Austin said, noting that Crossbar plans to add a $150,000 kitchen and install a special metal enclosed trash receptacle to be shared with neighboring establishments.

Opponents’ attorney Brooke Lierman asked if they would they be able to move the tables for special events. “They won’t be nailed down,” Austin said, after some back-and-forth. What would the alcohol content of the beer be? His answer: 4-7 %.

Some of the sharpest exchanges came over testimony about negotiations between the two sides – which took place as recently as the day before the hearing.

Holman accused the opponents of being “difficult” and waiting until the last minute to discuss brokering an agreement, after they realized they wouldn’t have enough signatures of nearby residents to invoke the “51% rule.”

Lierman said they did have discussions with Crossbar, but the exchanges were cut short when Crossbar convinced the Liquor Board to change the hearing date. 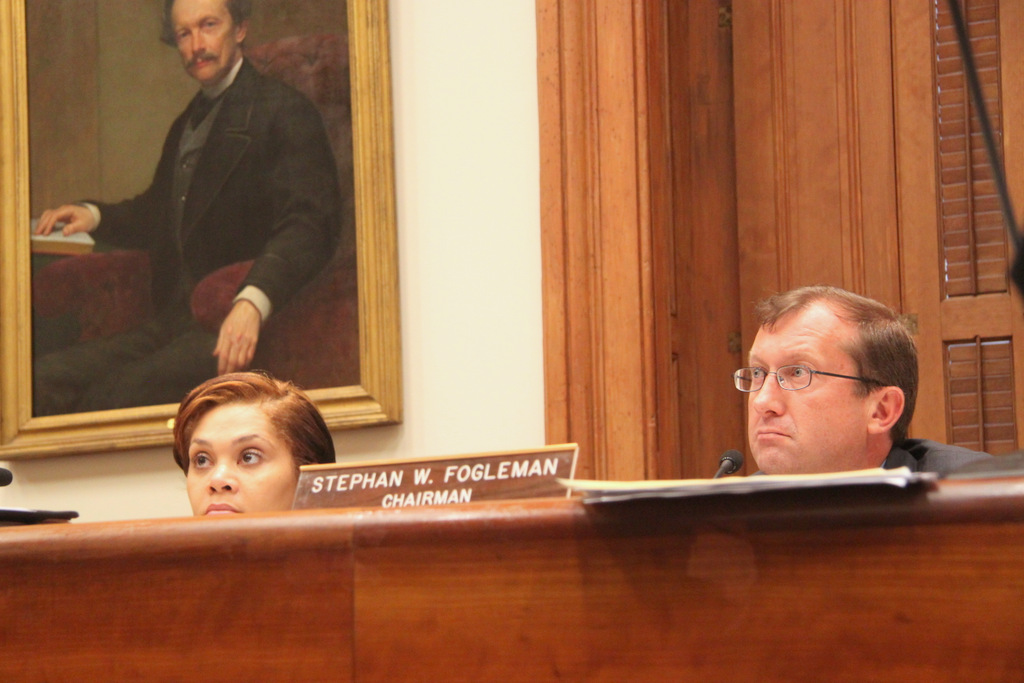 “We made every effort under the sun to work out a deal with this group,” said Federal Hill Neighborhood Association president Eric Costello, facing Holman directly. “You dismissed seven of our nine points saying ‘Sorry, you just don’t get it, it’s not that big of a deal.’”

Costello cited an April meeting with the primary person behind Crossbar, Brian McComas, of Ryleigh’s Oyster, in explaining why their side had hardened its stance.

“I personally had been hopeful we would get a deal with you and that’s the god’s honest truth,” Costello said.

(With McComas not present at the hearing, Fogleman advised Costello to refrain from such “hearsay” in his testimony.)

Holman outlined Crossbar’s final negotiating points: limiting “pub crawls,” agreeing to a 25% food requirement, providing valet parking on weekends, not applying for live entertainment for a year, closing the patio at 11 p.m. on weekdays and at midnight on Fridays and Saturdays for a year.

Lierman said the concessions weren’t enough, noting: “after a year these residents will still be here.”

What a Policeman Sees

Over the course of the hearing, residents described smashed flower-pots, feeling “like a prisoner” inside their homes because of the parking congestion, turning on music in their chilren’s bedrooms at night to mask the noise, shops that sell toys and children’s clothing leaving the neighborhood.

Some of the most compelling testimony, though, came from someone who doesn’t live in the area but said he knows the bar scene well: Baltimore City police officer Martin Runk, who has worked overtime weekend shifts in the area for the past three years. 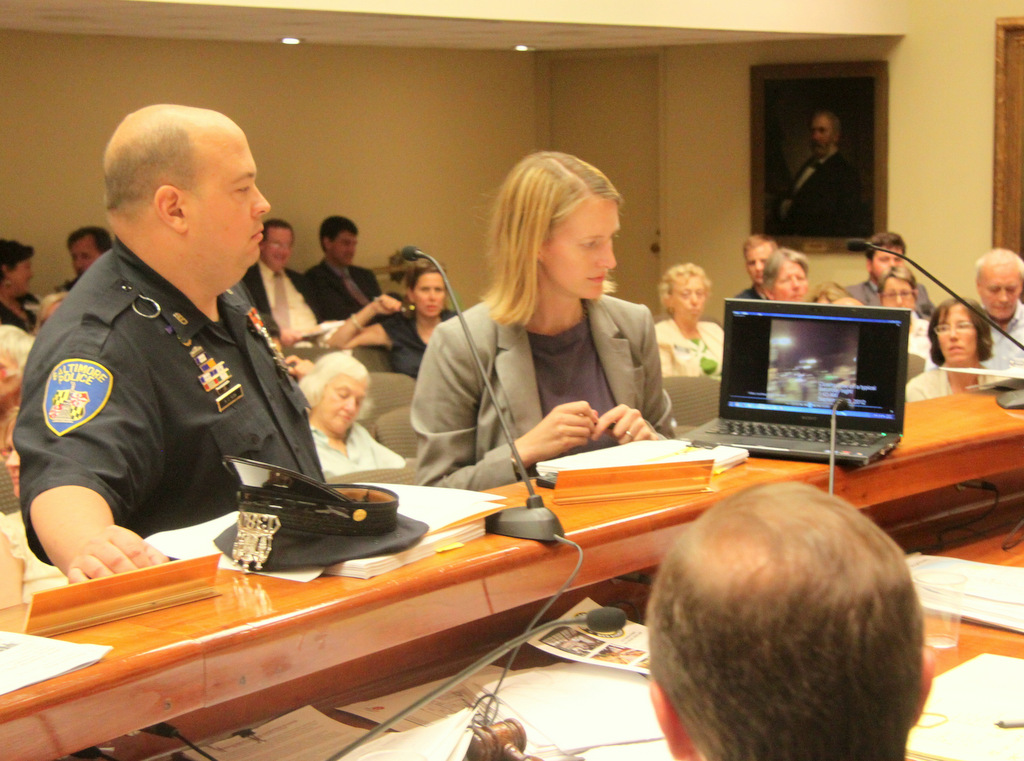 He said officers, at closing time, must deal with “fights, drunk people running into one another” in the roadway and protecting the women who emerge from the bars extremely intoxicated and vulnerable: “I’m sure there are sexual assaults that have not been reported.”

Another problem is “drunk people getting rolled” as they walk to their cars, Runk said, adding that “there’s a good likelihood of people getting robbed,” especially around Sharp-Leadenhall.

Asked about the police strategy is to minimize the mayhem, Runk had an answer that sent murmurs through the crowd:

“We pretty much push them out to the [surrounding] neighborhoods to get them away from the bars.”