The city’s plan to sharply hike water and sewage rates over the next three fiscal years has been subject to widespread confusion and misinterpretation, right down to how much the increase will actually amount to.

To clear the air, here are some of the whys and wherefores of the rate increases, which are scheduled for a vote this Wednesday at the Board of Estimates and whose expected rise will be reflected in your water bill come October.

What actually is the latest rate increase?

The proposed 15% hike would be the highest single-year increase ever, with the exception of fiscal 2003, when it went up 16%.

How does this translate to my quarterly water bill?

The water bureau has put out an example of a so-called “typical city consumer” using 170 gallons of water per day. That usage amounts to the needs of two adults. Their quarterly water and sewer bill would rise from $157 currently to $181 later this year, $201 next year and $223 in 2015.

For a family of four, these figures need to be doubled, which would make water costs about $2,000 a year by 2015. [Department of Public Works spokesman Jeffrey Raymond objected to this calculation and said it is not correct.]

Are the new rates justified?

Legally, yes. The city has the right to increase water rates as much as it likes under a 1978 charter amendment requiring water and wastewater utilities to be maintained as self-sustaining operations.

This means that the city cannot legally defer payments to some future date or allocate funds from other sources to pay for the cost of utilities. Revenues must be sufficient to retire the water bonds offered to investors, with the directors of finance and public works responsible for recommending to the Board of Estimates the rates and charges to do so.

What are the drivers of water and sewer costs?

Water bills have been increasing every year since 2008. These increases were justified as the price of meeting a 2002 consent decree between the city and the Environmental Protection Agency (EPA) and Maryland Department of Environment to stop sewage overflows into the harbor in violation of the Clean Water Act.

While the consent decree costs are still enormous (now estimated at $1 billion over the next six years) – there are even larger costs independent of the decree. These include the city’s plans to build a new water treatment plant (the Fullerton plant), replace open-air city reservoirs with underground storage tanks, install high-tech water meters and rebuild 40 miles of pipeline per year. 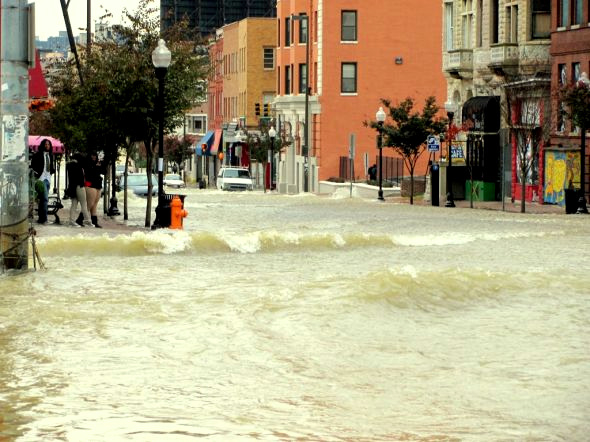 The city says increased rates will allow for preventative maintenance to avoid such events as last November’s water main break that send a river of water down Charles Street at North Avenue. (Photo by Mark Reutter)

These upgrades will cost more than $2 billion over the next six years, says water bureau chief Rudolph Chow. “The 15% [rate increase] will not get me there,” Chow said in a recent interview.

But the 42% increase set over the next three years will help get the city’s financial house in order to pay for what Chow characterizes as “stabilizing the city’s infrastructure.”

According to Chow, “We have been deferring, not reinvesting, for years. The question is, do we pay now when we have control over [the system] or do we wait until the whole thing collapses.”

Not so fast, says the city auditor.

Last week, the Board of Estimates gave city auditors seven extra days to review the underlying projections of revenues, expenditures and cash balances that support the proposed rate increases.

City Comptroller Joan Pratt said auditors did not receive all of the necessary financial material from finance and public works to review the materials until a few days earlier. Pratt asked the board to delay voting on the proposed rate package until audits completes a thorough investigation of the material. The board, controlled by Mayor Stephanie Rawlings-Blake, voted down Pratt’s motion.

As it now stands, the audit department is expected to deliver its report to the panel on July 3, followed by the board’s vote on the rate increase.

Yes. Even though county residents receive city water and flush through city sewer mains, Baltimore County can set its own utility rates. Instead of charging all residents for increased costs, the county has a fund that accumulates fees from other sources, such as water and sewer hookups from new development. As a result, rates for existing customers are kept down. The county last raised its residential water rates in 2010 – and has no intention of raising them this year.

Otherwise, water rates in Anne Arundel County are virtually identical to the current city rates, while the rates for “wholesale water” in Howard County and “raw water” in Carroll County are much lower than city rates.

Can I get a discount on my water bills?

The city has two programs to assist low-income residents. Residents facing a turn-off notice owing to an outstanding water bill balance can receive a credit of $125 as long as they pledge to make consistent payments on their unpaid and current bills. Senior citizens are eligible for a 30% discount if their annual income is below $25,000 and they are property owners responsible for paying the water bill.

Problem is, very few customers know about, or use, the assistance programs.

According to water bureau spokesman Jeffrey Raymond, 2,000 out of 411,000 customers participate in the low-income assistance program and another 2,000 are enrolled in the senior discount plan. That makes a participation rate of less than 1% of users.